It’s an undeniable truth: Disney villains are hot. There’s a reason we have so much fan fiction dedicated to the romantic exploits of Walt’s animated baddies. And it’s why one author has created her own erotica saga that looks at what would happen if some of Disney’s classic villains had emerged as the victors… and then had a lot of sex.

“I’ve always really enjoyed villains, they’re always my favourite part of any story,” Katee Robert told Gizmodo over the phone recently. “It just was a natural evolution to take that fascination for me and to write it at my preferred heat level, which is pretty spicy.”

Earlier this year, erotica writer Robert debuted her latest series, Wicked Villains, a series that features a Once Upon a Time-style crossover world of overlapping Disney characters involved in some really kinky stuff. The first book, Desperate Measures, is about a “Daddy Dom” relationship between Jafar and Jasmine. The follow-up, Learn My Lesson, explores a throuple between Hades, Megara and Hercules; it’s out October 30.

The series has been a bit of a challenge because Robert doesn’t have a history in fan fiction, but she said it’s been exciting to explore that part of herself and her writing. 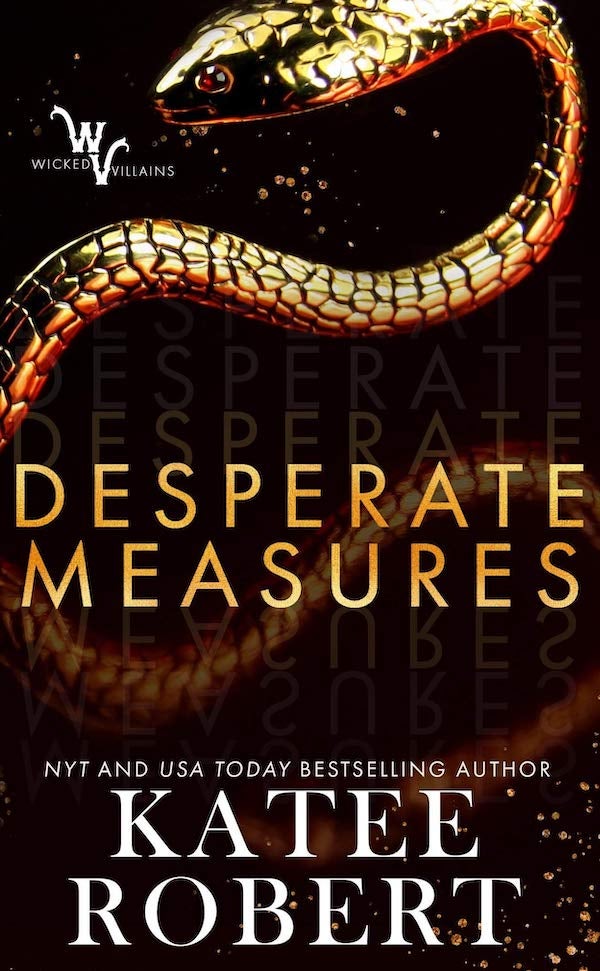 The cover for the first book in the Wicked Villains series, Desperate Measures. (Image: Trinkets and Tales)

Robert told Gizmodo she was inspired to write Desperate Measures after getting into a conversation with some of her friends about Jafar being hot (personal note: some of my coworkers and I have had this exact same conversation, and I’m guessing many of y’all have too).

She said she had no plans to do this kind of series — she tends to avoid fantasy or similar adaptations, preferring to tell more grounded erotica stories — calling it “a fun indulgence” that eventually grew into what’s becoming one of her more-popular franchises:

With Disney re-releasing everything as live-action, it’s created some really interesting inspiration because everyone’s beautiful. When they announced Jafar’s casting, I was in a conversation with some of my friends. We basically started riffing back and forth about our favourite villains, and how the scene with Jafar and Jasmine when she’s wearing that red get-up made everybody a little confused as children. I just said it: “Jafar is a Daddy Dom!” And that basically spawned the entire book.

That said, this isn’t a fantasy series. The characters have the same names as their Disney counterparts, but in thoroughly modern stories which share themes with the original tales but aren’t carbon copy remakes. That’s partially to avoid Disney’s ire, I’m sure, though Robert said some of the changes were to make the books more in line with the actual fairy tales or other source material — at least thematically. For example, in the upcoming Learn My Lesson, the characters of Megara and Hercules are modelled more after their Greek counterparts than the Disney versions.

In Desperate Measures, Jasmine is the daughter of a powerful CEO who Jafar ordered killed so he could take over the company. It also paints Aladdin, referred to as Ali in this story, as the true villain of the story — a dangerous and scheming man who deludes himself into thinking he knows what’s best for Jasmine. This kind of reflects Robert’s own opinion of Aladdin’s titular hero.

“Aladdin is arguably… could easily be the villain. He’s a liar, he’s a thief, he engages in slavery — kind of — with the genie,” she said. “Jafar, while being murderous and evil, is at least moderately upfront about it.”

The book makes it clear that Jasmine enjoys and indulges in their power dynamic, and they do have a safe word (“Rajah”) that Jafar is shown to obey. However, the story does deal in areas of dubious consent. This may be uncomfortable for some and should be kept in mind before reading.

The fact that it’s a modern story, without magic or talking animals, means there are more opportunities to bring different Disney villains together under one shared universe. The overarching world of Wicked Villains is a city ruled by different crime syndicates, which are each run by a different Disney villain and their gang. It may take away the hooks and blue flame hair, but it does make for some fun crossovers. It’s common to see cameos from characters who will be getting their own stories in the future, like Captain Hook and Tinker Bell, whose own story called A Worthy Opponent is set for February 2020.

“I think it’s just the villains themselves. They’re so instrumental in a lot of people’s personal histories, and these are the tales that we grew up on. Telling them from a different lens has been absolutely delightful,” she said.

Robert said she has at least six books planned in the series and could possibly keep going if the response stays positive, adding that she’s most excited for her upcoming Sleeping Beautiful and Maleficent story. But for now, it’s all about Jafar and Jasmine. Because Jafar is totally a Daddy Dom.