Mr. Sinister’s High Camp Perfectly Cuts Through The Drama Of Powers Of X 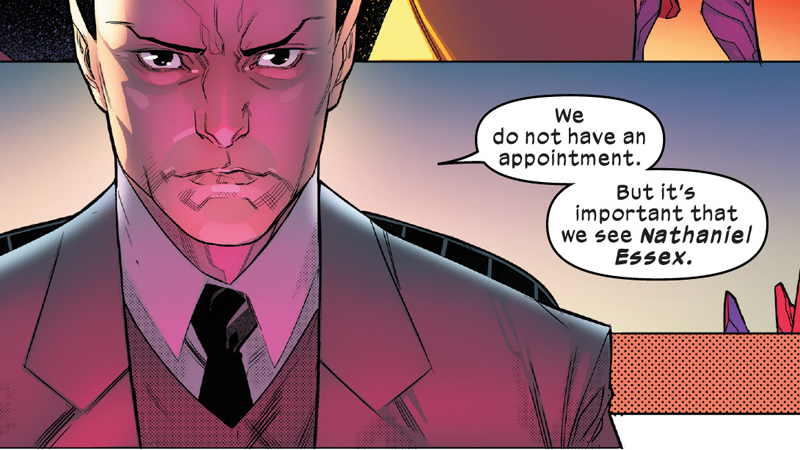 Charles and Magneto barge their way into Bar Sinister. (Image: R.B. Silva, Adriano Di Benedetto, Marte Gracia, and Clayton Cowles, Marvel Comics)
To sign up for our daily newsletter covering the latest news, features and reviews, head HERE. For a running feed of all our stories, follow us on Twitter HERE. Or you can bookmark the Kotaku Australia homepage to visit whenever you need a news fix.

So far, Jonathan Hickman’s bold re-envisioning of the X-Men’s place at Marvel Comics in House and Powers of X has been exactly that: bold. It has audaciously upturned everything we ever thought we knew about them, it has plunged headlong into esoteric ideas. Last week, it wanted to remind us it is still very, very much a series about fabulously silly people in Spandex.

That delectable paradox of it all is made more paradoxical by the fact that Powers of X #4 ” by Hickman, R.B. Silva, Adriano Di Benedetto, Marte Gracia, Clayton Cowles, and Tom Muller ” is both perhaps the most gleefully, earnestly silly issue of the House/Powers duology so far and yet also one of its most important.

Once again spread across myriad timelines ” here specifically Xâ°, the past as Moira X reveals herself to a younger Charles Xavier; XÂ¹, the present Marvel timeline; and then XÂ³, a far-flung future where bold plans are being made with the sinister Phalanx to ensure mutantkind’s ascension to a new plane of existence ” Powers of X #4 offers a quick catch up on some important context.

In XÂ¹, we see the early days of Charles exploring Krakoa before it is made into mutantkind’s sovereign nation, a scene that is both intriguing and made immediately sinister by Xavier’s peculiar, colonialist attire that makes his simple exploration of the island feel suddenly more imperialist.

Meanwhile in XÂ³, we start to see the unfolding of the strange pact made between the Phalanx, Nimrod, and the Librarian’s people ” a merging of consciousnesses that could require the sacrifice of flesh and blood to complete, even if means letting the gathered mutant library of living memories ascend.

It’s a lot, but it’s mainly in the Xâ° era that Powers of X #4 gleefully plays around with its mix of the grave and the goofy. Mainly, because after myriad teases, one of the most important antagonists of this whole endeavour has been revealed: Mister Sinister. And he’s very, very fabulous. 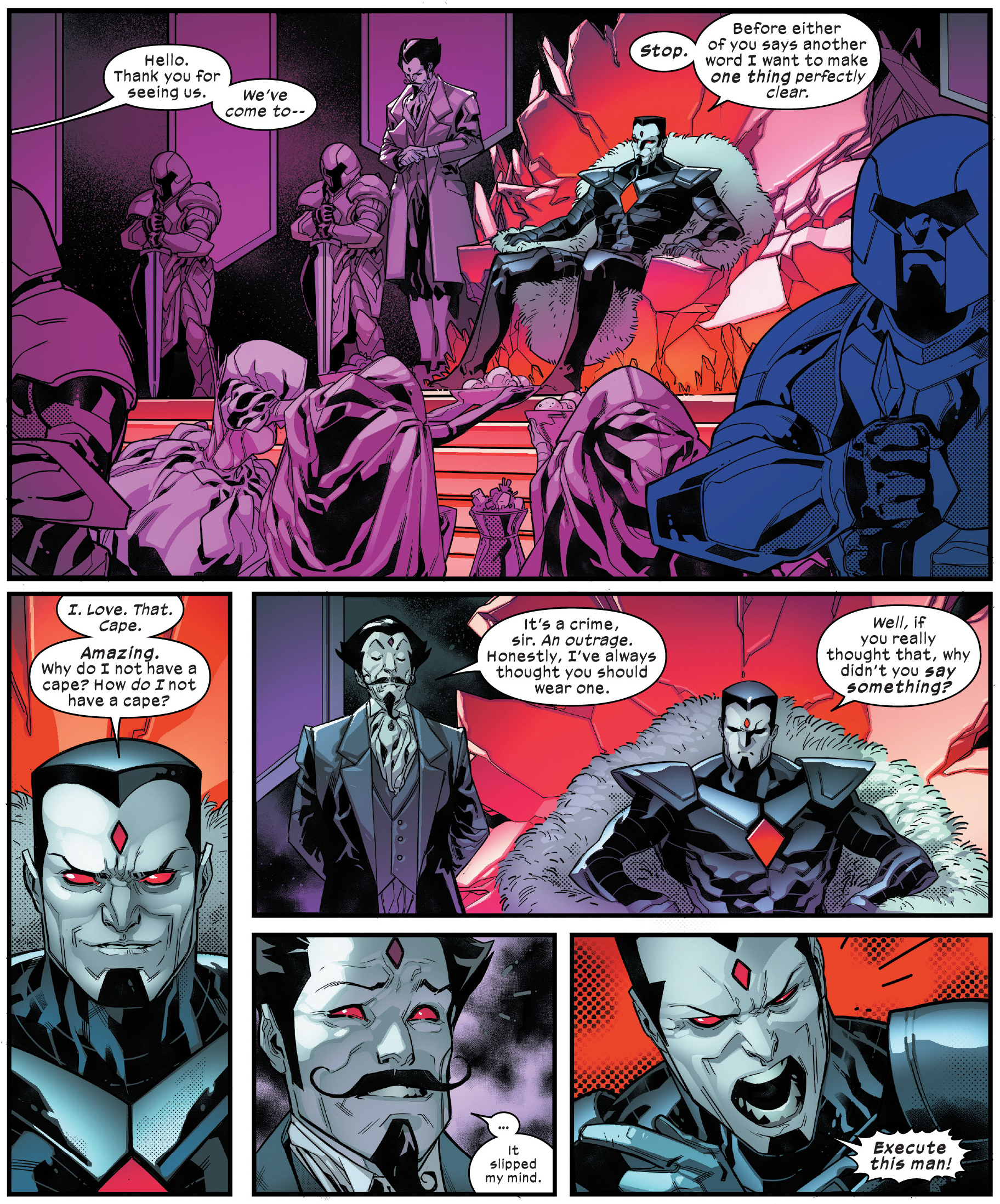 There may be many Nathaniels Essex, but they are united by a love of the fabulous. (Image: R.B. Silva, Adriano Di Benedetto, Marte Gracia, and Clayton Cowles, Marvel Comics)

Xâ°’s storyline in this issue is concerned primarily with set up ” Charles and Magneto, now having been burdened with the knowledge of Moira’s many lives, come to Nathaniel Essex with a request to switch the focus of his cloning and genetics research from both himself and humankind to archiving the totality of the Mutant Gene.

A notion Essex is at first flatly against… until one of his many, many clones at Bar Sinister gleefully offs him, reveals itself as a Sinister with a mutant gene of its own, and takes its place as the lead of Essex’s vast army of selves.

Oh, and gets a cape, because apparently the mutant gene comes with a flair for the dramatic. With the deal made and Sinister’s memory erased of how it all came about thanks to Charles’ powers ” given the order to only remember why he’s categorising the X-Gene when Xavier himself commands him to ” the set up for what we already know is going to be a wild path for Mister Sinister is laid.

There’s an air of tragedy to it all, and of menace; we know that Sinister is going to one day betray Mutantkind after decades of creating armies of chimeric mutants to fight their way with humanity, because we’ve seen in the XÂ² timeline, a century (give or take a few decades) beyond these events.

The sharp mood swings from each Sinister clone, from childlike delight to immediate, murderous fury, are simultaneously unsettling and comical. It is, in many ways, a coalescence of many of the ideas we’ve seen laid out in this duology: a chilling alien otherness to these peculiar, othered beings, an existential ponderance of what it means to live and die (especially when you have an army of your own clones).

It invites enigma, sows distrust. Because which of these myriad Mr. Sinisters can we really trust, when they’re treated with such flippant disregard by, well, themselves? 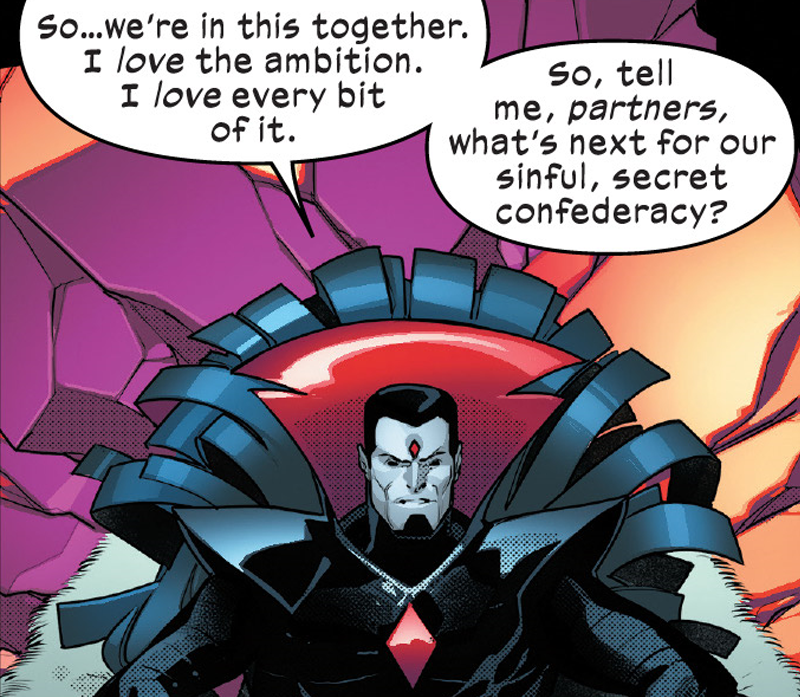 And yet, it’s also a deeply, deeply silly thing to watch unfold. It’s hard not to laugh, and embrace the camp of it, as Hickman’s dialogue for Sinister gets hammier than an all-you-can-eat pork buffet. After all, these are over-the-top egos clashing, running around in capes and silly uniforms, sagas of superheroes and supervillains.

There is an inherent absurdity to it all, even among the drama. That has always been the joy at the core of superhero comics, and even as this duology makes brave moves and lays out heady concepts, it’s nice to have it lance a bit of its own pomp and circumstance and remind us of that. Even, as an added twist, doing so with the character that is ostensibly one of the biggest threats of this an entire saga.

At the heart of it all lies Powers of X‘s Mister Sinister ” a charming, garrulous villain who could one day doom mutantkind to sheer devastation. But not after he’s reminded us to trust no one, not even yourself.