My Hero Academia Has Turned Prince Into A Majestic, Purple Superhero Of Love

Before My Hero Academia’s resident layabout Shota Aizawa — a.k.a. the power-disabling hero Eraserhead — became a pro hero-turned-surly homeroom teacher, he was an equally surly UA student. My Hero Academia: Vigilantes has spent a significant amount of time exploring that period of Eraserhead’s life, and recently we got to meet one of his very familiar-feeling mentors.

Like any good prequel worth its salt, a lot of the fun of Vigilantes comes from seeing established characters from the original manga/anime series as younger, more inexperienced versions of themselves who are still in the process of becoming the people we know them to be. Aizawa’s more or less always been the same sort of grump, in the same way that his fellow hero-in-training Midnight’s always had a penchant for wearing as little as possible.

But there’s a charm to their depictions in Vigilantes — from mangaka Betten Court — because while the broad strokes of their personalities and aesthetic choices might be there, their senses of self, the thing that truly makes them all heroes, are still works in progress, meaning that they all tend to make the kinds of mistakes they’ll go on to chastise their students for.

Surprisingly, the best new bit of lore established in the most recent chapter of Vigilantes isn’t about any of the established heroes specifically, but rather their Work Studies mentor, His Purple Highness — a character who’s best described as Prince, but with super strength, speed, and durability. Vigilantes Chapter 61, released in Shonen Jump this week, follows as Eraserhead, Midnight, and their teammate Loud Cloud repeatedly try to attempt to apprehend a smoke-blowing criminal who’s broken the law.

While the trio of students are enthusiastic about wanting to stop the villain during a foot-chase, when they realise that the mayhem that’s being caused has put the lives of innocent bystanders in danger, they’re forced to make a split-second decision.

As Midnight and Loud Cloud tend to the civilians’ safety, Eraserhead continues after the criminal, but because the villain’s smoke Quirk (that’s his superpower, for those not up to their My Hero lingo) interferes with Eraserhead’s ability to see, his erasure Quirk — which can nullify someone’s Quirk if Aizawa makes eye contact with them — is rendered useless, and he’s put at a distinct disadvantage for the fight that he’s about to have.

But just as it seems as if Eraserhead’s about to get his arse whooped, his Pro Hero mentor, His Purple Highness of the Purple Revolution Agency, leaps onto the scene to save his student from certain death. Though the villain ultimately gets away, High Purple Highness explains to Midnight and Loud Cloud that they were right to follow their instincts and protect the innocent because ultimately, that’s a hero’s most important job — and banks can always bounce back from robberies.

When it comes to Eraserhead, however, His Purple Highness doesn’t hesitate to snap at the boy, not for letting the bad guy get away, but for not fully understanding how a hero’s presence and presentation are key parts to the way that they inspire hope in people. 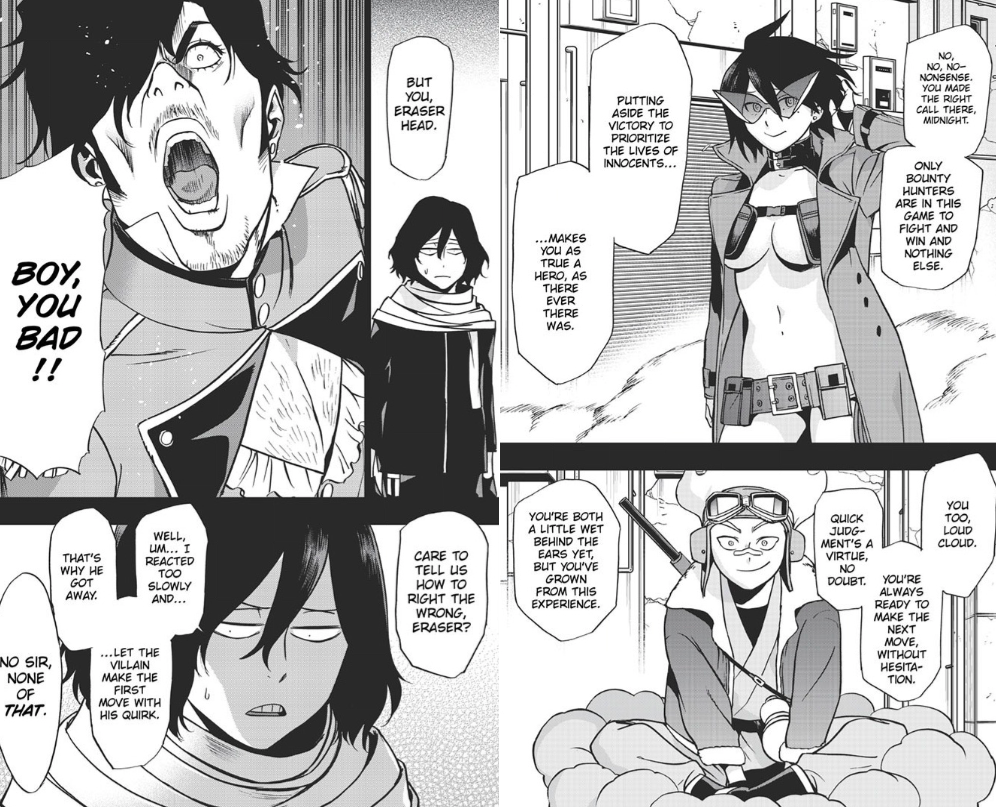 His Purple Highness praising two of his students and ragging on the third. (Image: Betten Court, ViZ)

Everything about His Purple Highness, from his pout to his flair for the dramatic, screams Prince, but it’s the way the hero takes his role as a mentor to the next generation so seriously that makes the character feel like a proper homage to one of the most seminal artists of our time.

Prince was legendary for bringing talented women in particular into his inner circle and using his status in the industry to help elevate them to positions of recognition and prominence.

Prince didn’t just find artists he wanted to work with, he helped cultivate them into the kinds of presences that the public would take note of for reasons other than their proximity to him, and that’s very much the sort of approach one imagines a solid Pro Hero mentor would take with their mentees.

By the end of the chapter, Eraserhead comes to understand that His Purple Highness really wasn’t trying to give him a hard time by reminding him to try and put on a good face for the public — and you can see that the young hero’s learned a valuable lesson he’ll remember for the rest of his life.

But now that High Purple Highness has been introduced into the world of My Hero Academia, a couple important questions now need answering: where the hell has the hero gone in the present day, and when can we expect to see him in full colour (preferably performing a song while fighting crime) in the anime series?