NBA 2K20 is one of the best sports games I’ve played in a long time. It’s also a giant scam that is perpetually gross, and sometimes even terrifying, to be around.

This might sound weird considering this is a sports game, but 2K’s basketball titles are some of the hardest things I ever have to review for this site. What I perceive to be the “good” and the “bad” of each entry in the series aren’t things that can be easily separated. In 2K20 they’re intertwined, everything good about it undermined by — and indivisible from — everything bad. 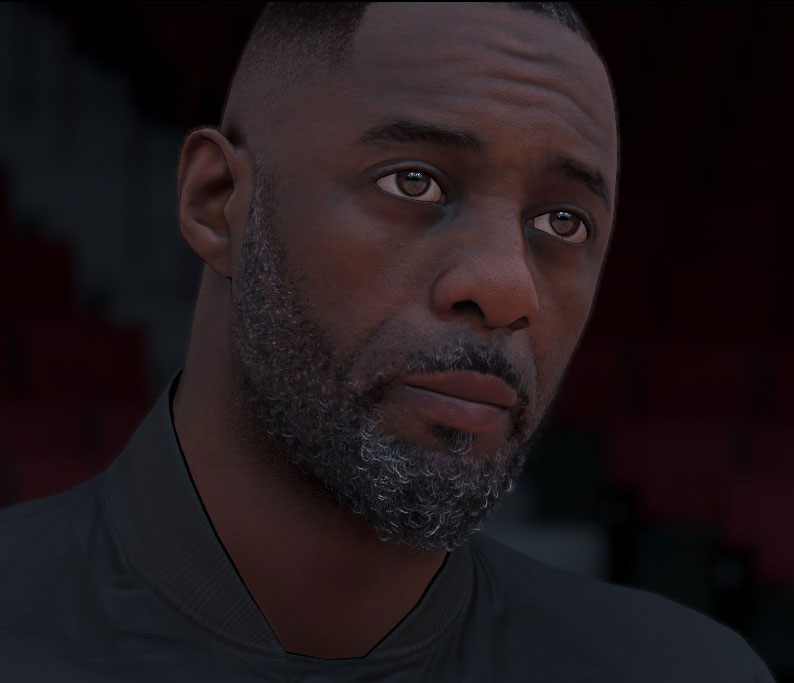 Nope. As we always do, this is only a review of 2K20’s MyCareer mode, not the entire game. I think its scope, coupled with the focus 2K places on it in terms of creating and selling their game, make it interesting enough to warrant this focus.

I’ve spoken so much about this game’s obsession with microtransactions at this point that I don’t want to bore you again here. Suffice to say, NBA 2K20 — a full-priced retail game — is rotten with attempts to get you to spend real money on everything from players to clothing to player stats. Some game modes, like MyTeam, are built entirely around this thirst, but even in MyCareer’s singleplayer you’re being hounded.

For years 2K’s MyCareer storylines have been a disaster, saddled with ludicrous paths to the NBA and downright embarrassing attempts at “hello fellow kids” humour. That’s all been replaced in 2K20 with the earnest tale of a college kid who takes a principled stand against organisational hijinx, only to see his draft stock plummet.

An unexpectedly topical jab at the NCAA, this year’s MyCareer story has you play a handful of college games before embarking on a journey towards the NBA that includes invitational tournaments, the Draft Combine (complete with mini-games for stuff like vertical leap) and Summer League.

It’s a lightning-fast introduction, which you’ll blow through in only a few hours, but it’s also by far and away the most authentic career path the series has ever managed. Like FIFA’s The Journey, while this certainly has its hokey moments, it’s sincere with most of what it’s attempting, and slots in nicely alongside your actual NBA play as a result.

It’s wild remembering that only two years ago players were cast as a DJ getting invited to practice with an NBA team, only this year to live the more realistic life of a high profile college recruit, agent discussions and all.

MyCareer’s story — particularly during its cutscene-heavy prologue — is a fulfilment of almost everything the mode has been trying to do for years now. Celebrity cameos (particularly Idris Elba’s performance as your coach) are tasteful and very well-done, the story skips along without lingering too long in any one place (last year’s G-League focus went for waaaaaaay too long) and by the time you’re an established NBA player you really feel like you’ve earned your place.

It’s absolutely no surprise to find, then, that all this progress is then swiftly undone, not just by the series’ usual microtransaction nonsense, but by 2K’s slavish hunger for Brands™ as well.

This year’s story mode was handled by SpringHill, LeBron James’ own production company (James is credited as Executive Producer), and the setup for MyCareer’s attack on the NCAA feels more like an ad for SpringHill (especially when you consider the personal beef) than a genuine attempt to explore the issue, especially since the company’s co-founder Maverick Carter is one of the more prominent characters in the story prologue.

This is most evident, and depressing, in the way your player’s conflict with the college establishment is portrayed. After a teammate is injured and has his scholarship cut, you take a stand against your coach and school, and as a result find yourself benched ahead of the most important game of the season.

It’s a brave thing to do, but the way the game handles it after the fact is typical of where the series finds itself in 2019. After meeting an agent, you’re quickly introduced to Carter, who views your actions through the lens of what kind of sponsorship deals you can attract, and which Brands™ want to share your story (including his own).

That’s it. That’s the extent of how NBA 2K20 views an act of personal sacrifice, one that barely scratches the surface of some of the more pressing issues affecting college sports and how it compensates the athletes that drive its profits… As a marketing stunt. An opportunity to sign some contracts. Like they looked at Colin Kaepernick’s struggles with the NFL and all they got out of it was his Nike deal.

The series, which has long been pioneering ways for Brands™ to infiltrate every corner of your experience on the court, from Gatorade-infused timeouts to Nike and Adidas apparel contracts, has finally found a way to weave them into the story itself. 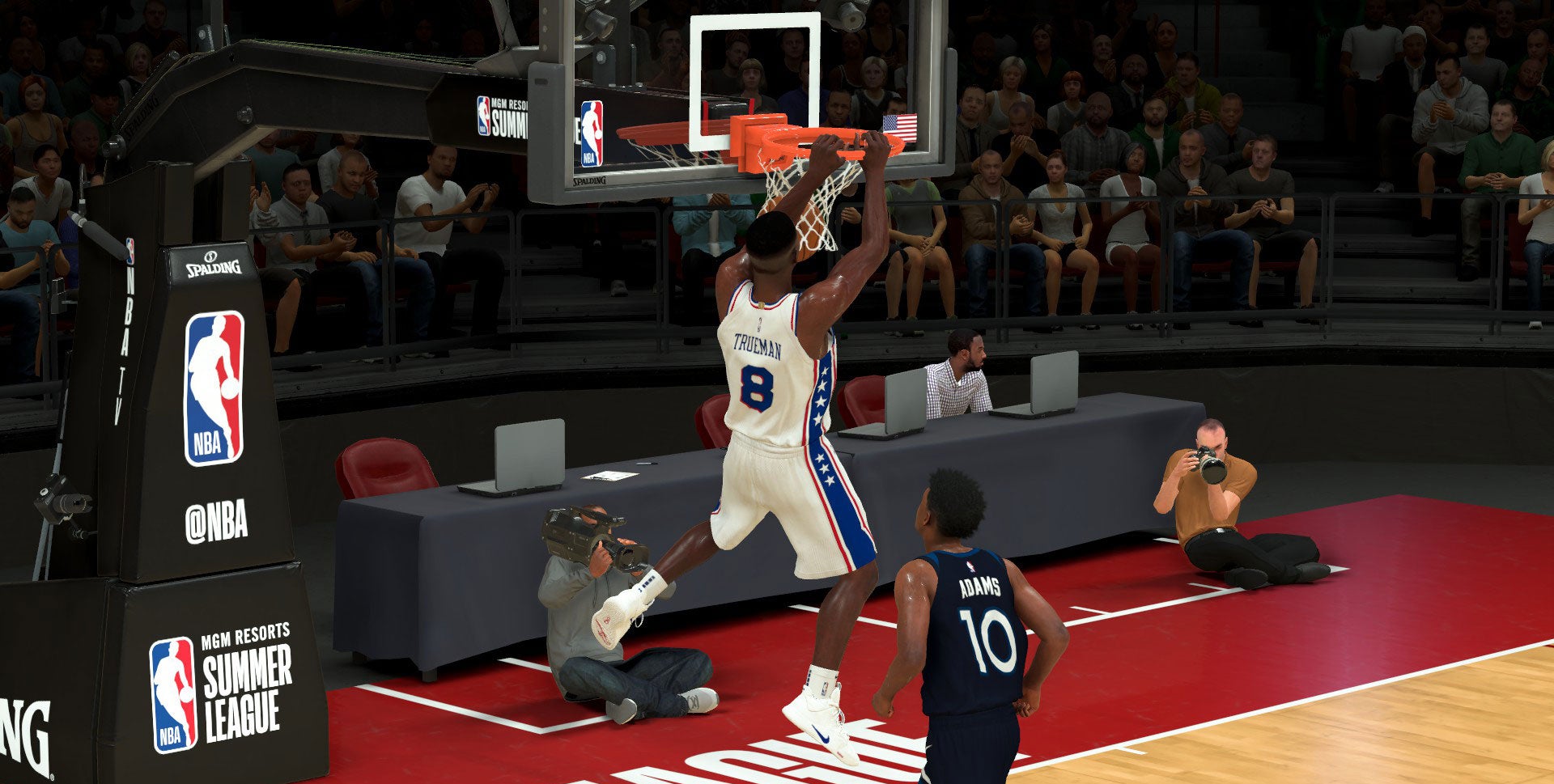 Every season I complain that 2K’s desire for microtransaction spending and advertiser encroachment has got worse, every year I hope the next edition of the game addresses at least some of that, and every year I’m left increasingly disappointed.

It doesn’t have to be like this! No other major sports game tries to pull this kind of shit. Even EA, the supposed wORsT coMpaNY iN VidEO gAmES, has the sense to keep its brand partnerships limited to realistic broadcast expectations, and to not charge players for singleplayer game mode content.

And yet year after year 2K, despite intense fan protest online, turn the dial up and try to squeeze everyone just a little bit more. Clearly there are millions of fans who either don’t care, or are at least willing to suffer through it all, and it’s for these players that 2K is happy to continue building their entire game around the central conceits of microtransactions and advertising.

But for me, someone who just wants to have a little story alongside a singleplayer sports experience — which I really enjoy when I’m on the court! — NBA 2K20 is a new low.