Welcome back to Toy Aisle, our regular round-up of the best toys we’ve seen on the internet this week. Today, we’ve got hot bods, dad bods, metal bods, all sorts of bods! And that’s even before we get to Canada’s finest superheroes (some of whom I’m sure also have lovely bods, I’m certain). Check it out! 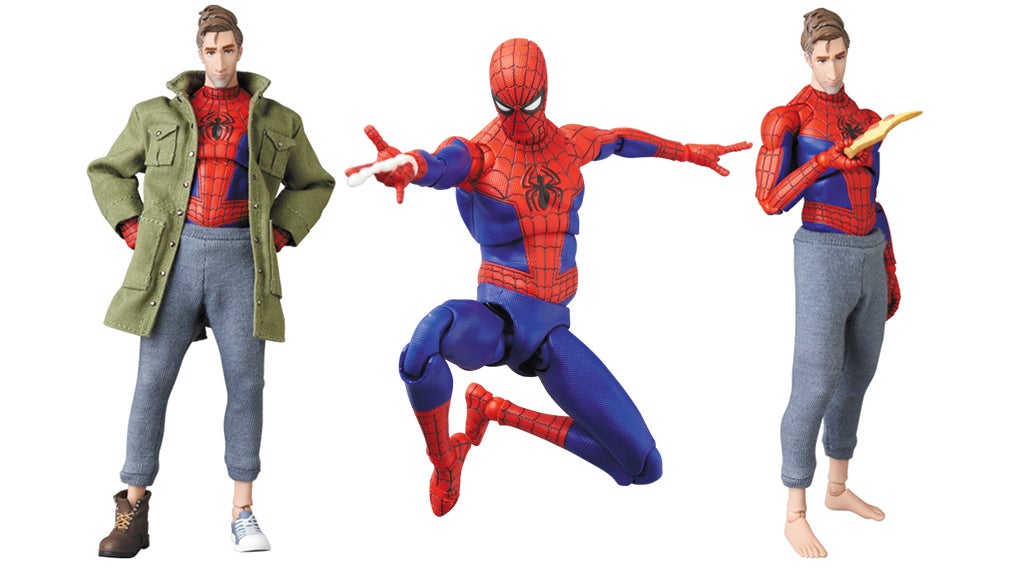 Medicom Toy MAFEX Spider-Man Into The Spider-Verse Peter B. Parker

A few weeks ago Medicom blessed us with our first look at their ultimate take on Into the Spider-Verse’s Miles Morales, and now, he has an incredibly underprepared mentor figure to go with him!

Clocking in at 6.3 inches tall, Peter Parker — sorry, Peter B. Parker — actually comes with a bunch of accessories replaceable parts to recreate either his appearance as an, uh, thicker-round-the-middle, experienced version of Spider-Man or in his raggedy, half-clothed self from when he first arrives in Miles’ universe.

Beyond the pieces and fabric clothing to recreate either look, Peter comes with some pizza (of course), a coffee cup (of course), various hands and webbing attachments to pose him mid-swing, multiple headpieces depicting him masked, unmasked, and even partially wearing his spider-mask, and a loose mask to grip for when he isn’t wearing. That is attention to detail right there. He’ll set you back roughly $125 when he releases alongside Miles in June next year. [Medicom] 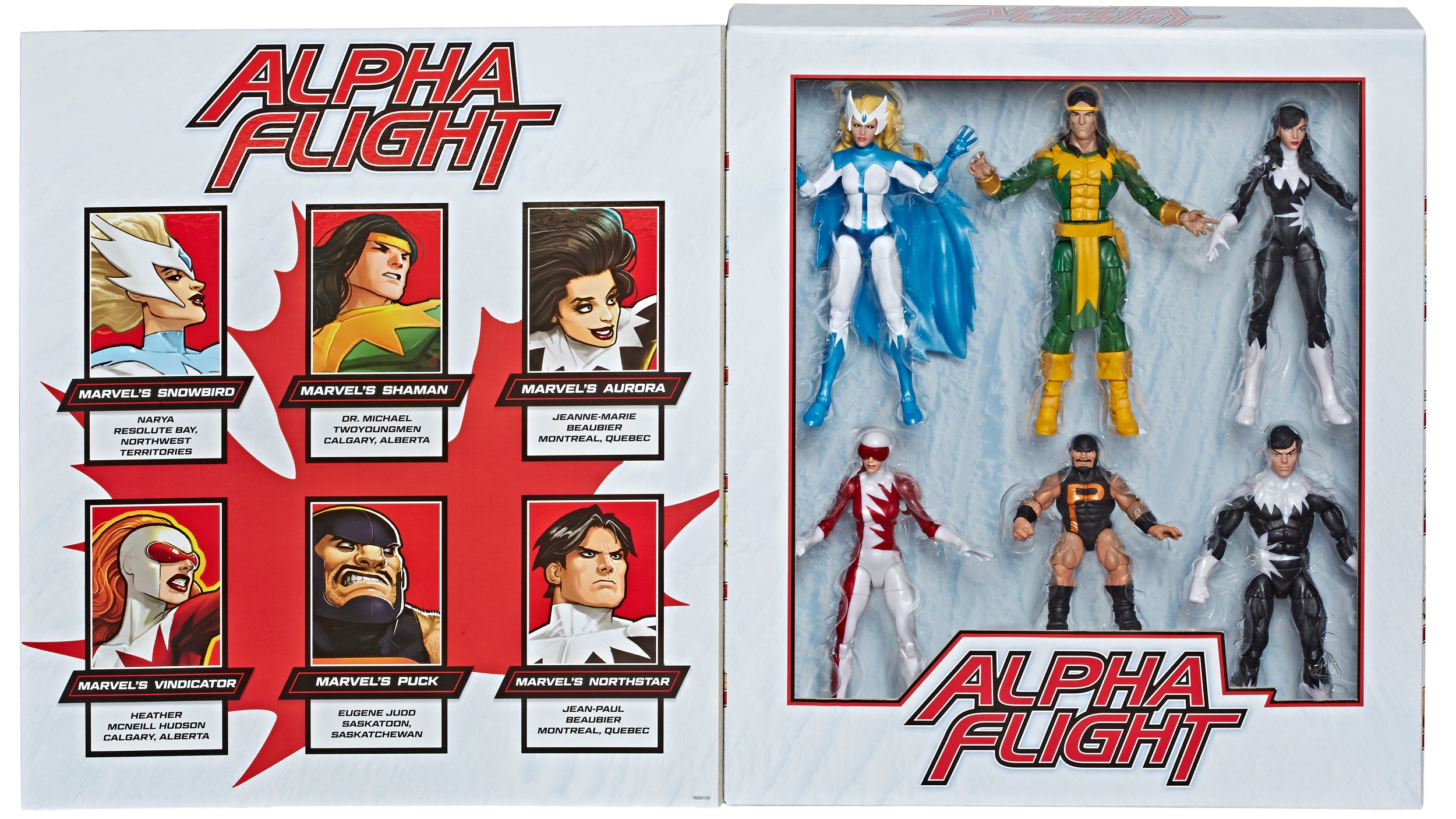 San Diego Comic-Con isn’t the only opportunity for toymakers to release limited-run collectible versions of their wares.

At Toronto’s Fan Expo last week, Hasbro unveiled a six-pack of six-inch Alpha Flight figures, which, if you’re not familiar, are Marvel’s most polite and apologetic heroes hailing from the great white north (aka Canada). Available in December for about $163, the six-pack includes Snowbird, Shaman, Aurora, Vindicator, Puck and Northstar, and not a single miniature bottle of maple syrup to be seen — thankfully.

Even the Dark Knight himself is forced to work right up until retirement if he wants that cushy Bat-pension to fall back on. But as Mezco’s One:12 Collective Batman: Supreme Knight figure demonstrates, we should all hope we look as good as Bruce does when we go completely grey up top.

It won’t officially be available until February 2020, but to help convince you to drop $120 the figure boasts over 30 points of articulation, three swappable heads included an unmasked Bruce, nine different hands, a giant collection of weapon accessories (including 10 batarangs) and a costume with stubby bat ears that don’t look quite as ridiculous. 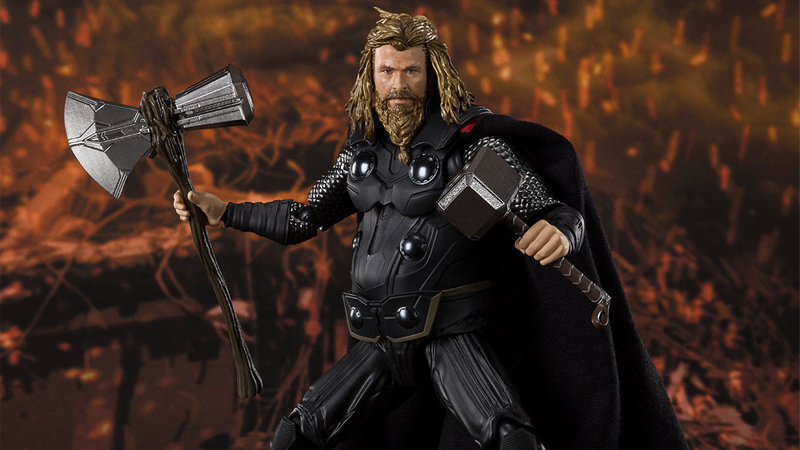 Yes, it’s finally time for Dad-bod Thor to get his moment in the merchandise spotlight. With Endgame far behind us now, we no longer have to pretend that all those toys of a svelter, space-suited Thor were a true representation of the wayward god of thunder’s appearance in the film, and Bandai is happy to oblige us with a Figuarts with a specially-designed body to accomodate Thor packing some… extra heat.

What, I’m clearly talking about him having both Stormbreaker and Mjolnir, of course! As well as various hands to wield either axe or hammer (or both at the same time), Thor has a fabric cape and with a poseable wire armature inside it for extra dramatic action. A web store exclusive in Japan, Thor will cost you around $90 when he releases in January 2020 — but preorders are live now! 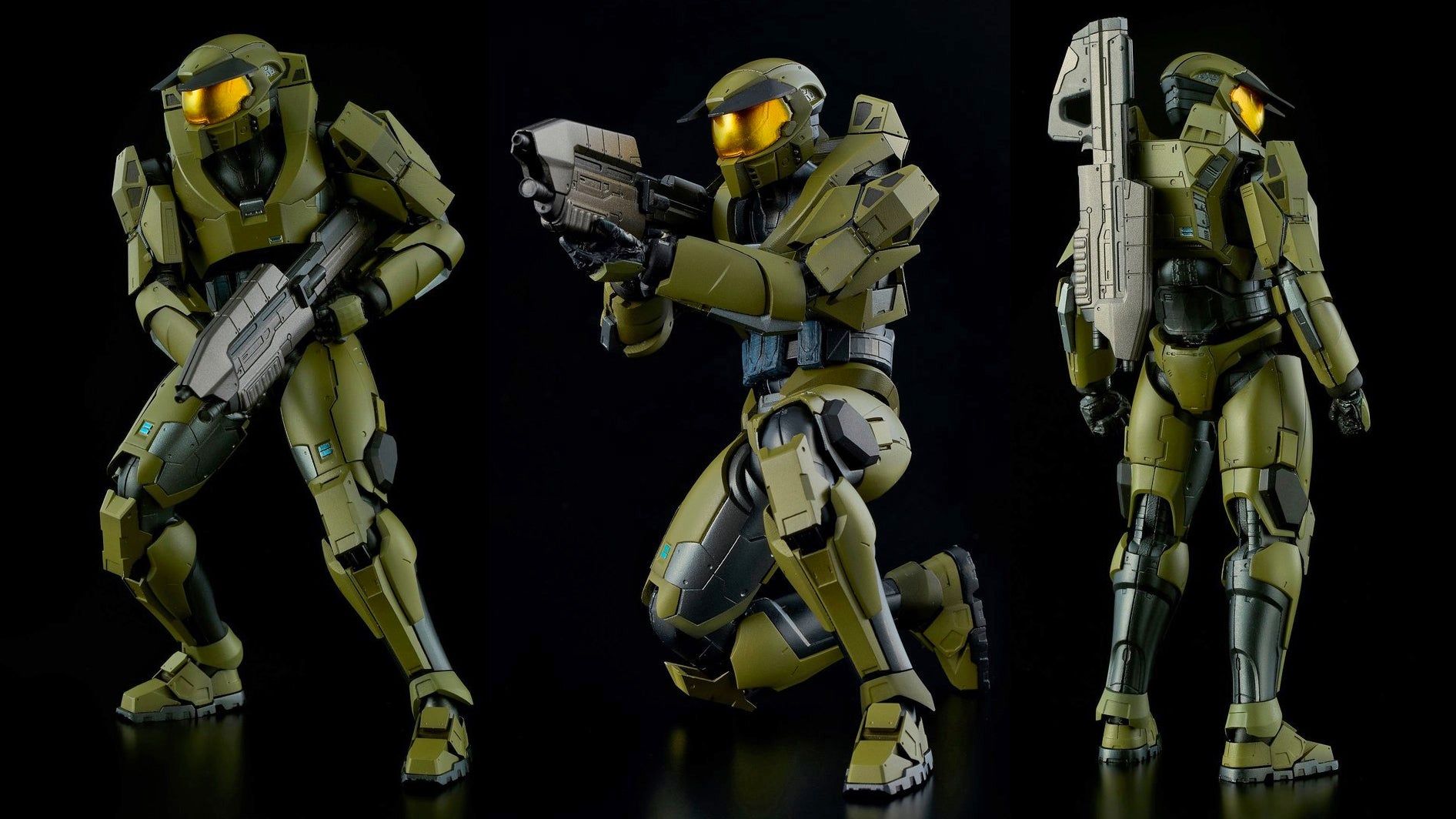 The character that helped establish Microsoft as a legit contender in the console gaming market can, as far as we’re concerned, never have too many figures. But 1000Toys’ RE-Edit Master Chief has to be one of the impressive scaled versions of the character, featuring a remarkably detailed recreation of his Mjolnir Mark V assault armour from the original Halo game.

Available sometime in April of 2020, the figure stands just seven-inches tall but costs around $185 since it’s made from a mix of die-cast metal and plastic and weighs in at just over a pound. It also includes all the requisite Master Chief accessories like an energy sword, a pair of M6D pistols, and the MA5B assault rifle. 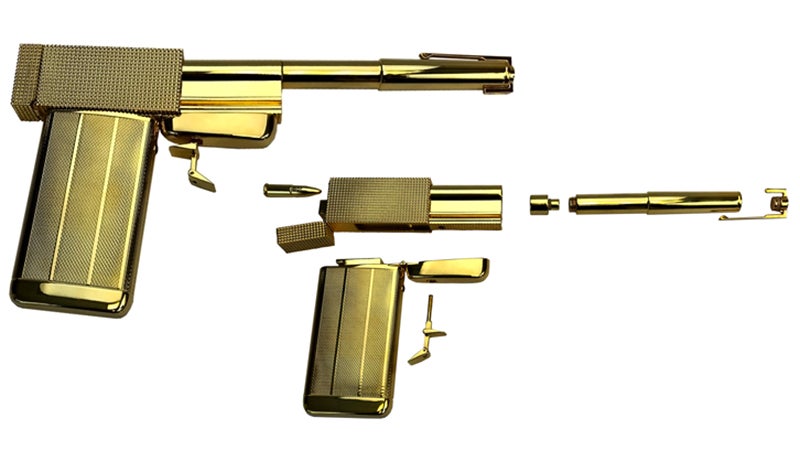 I’m (Andrew) not entirely sure why I was allowed to repeatedly watch The Man With the Golden Gun when I was a kid. But it remains one of my favourite James Bond films to date for one single reason: Francisco Scaramanga’s golden gun that Voltron’d together from seemingly innocuous items.

For many years I was obsessed with that prop, and built many (terrible) Lego replicas. Decades later, Factory Entertainment wants to sell you the (almost) real thing. Aside from actually firing bullets it’s fully functional and assembled from 18-carat gold plated items including a fountain pen, a lighter, a cigarette case and a cufflink.

Pre-orders start on September 1, but at around $1,187 you’ll need MI6’s budget to add this to your collection. 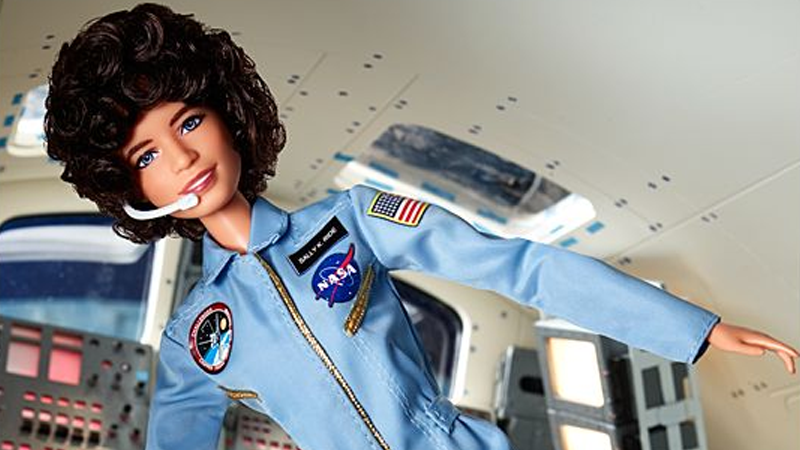 Every International Women’s Day, Mattel announces a new real-life historical figure to join their special line of “Inspiring Women” Barbie dolls — and this year is getting an astronomical boost in the form of noted NASA icon Sally Ride, the first American woman in space and, after a posthumous reveal in her obituary, the first known LGBT astronaut.

Announced alongside a Barbie of civil rights activist Rosa Parks, the Sally Ride Barbie features the astronaut in her 1983 Challenger mission suit and comes with both a communication headpiece and an astronaut helmet to wear.

The Ride Barbie is available now, with the Rosa Parks Barbie joining her in the series on Septemeber 6, for about $46 each. 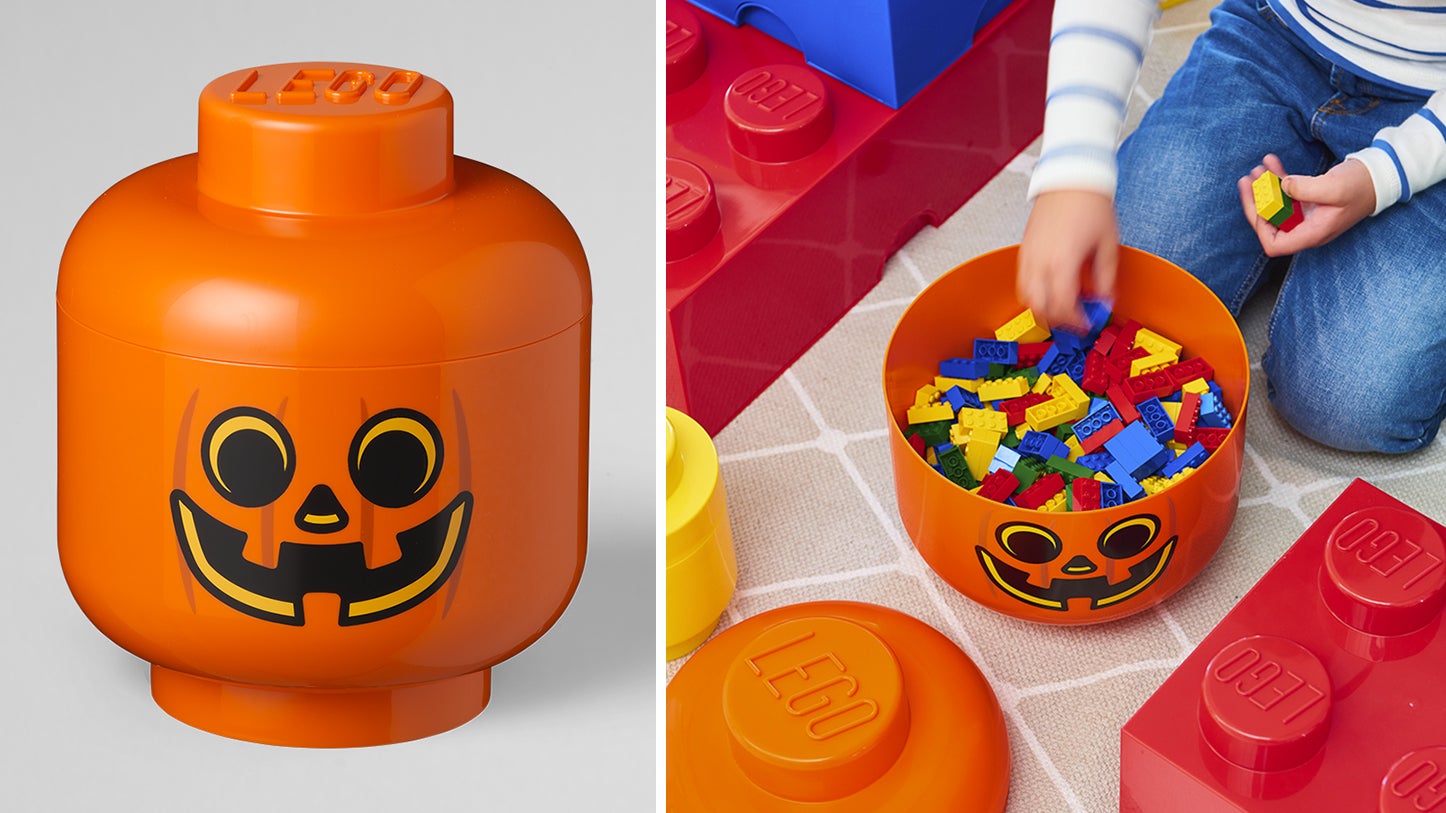 You might already be well into costume prep for Halloween, but have you given any thought to how you’re going to haul treats around? Don’t panic, Lego’s got you covered with its new pumpkin head storage container that looks like a life-size minifigure version of the Headless Horseman’s — err… head. It will about $18 for the small version, and $30 for the large, and hopefully it will arrive well ahead of October 31 so you can strap some carrying handles on there.