PewDiePie Has To Explain That His $50,000 Pledge To An Anti-Hate Group Is Legit 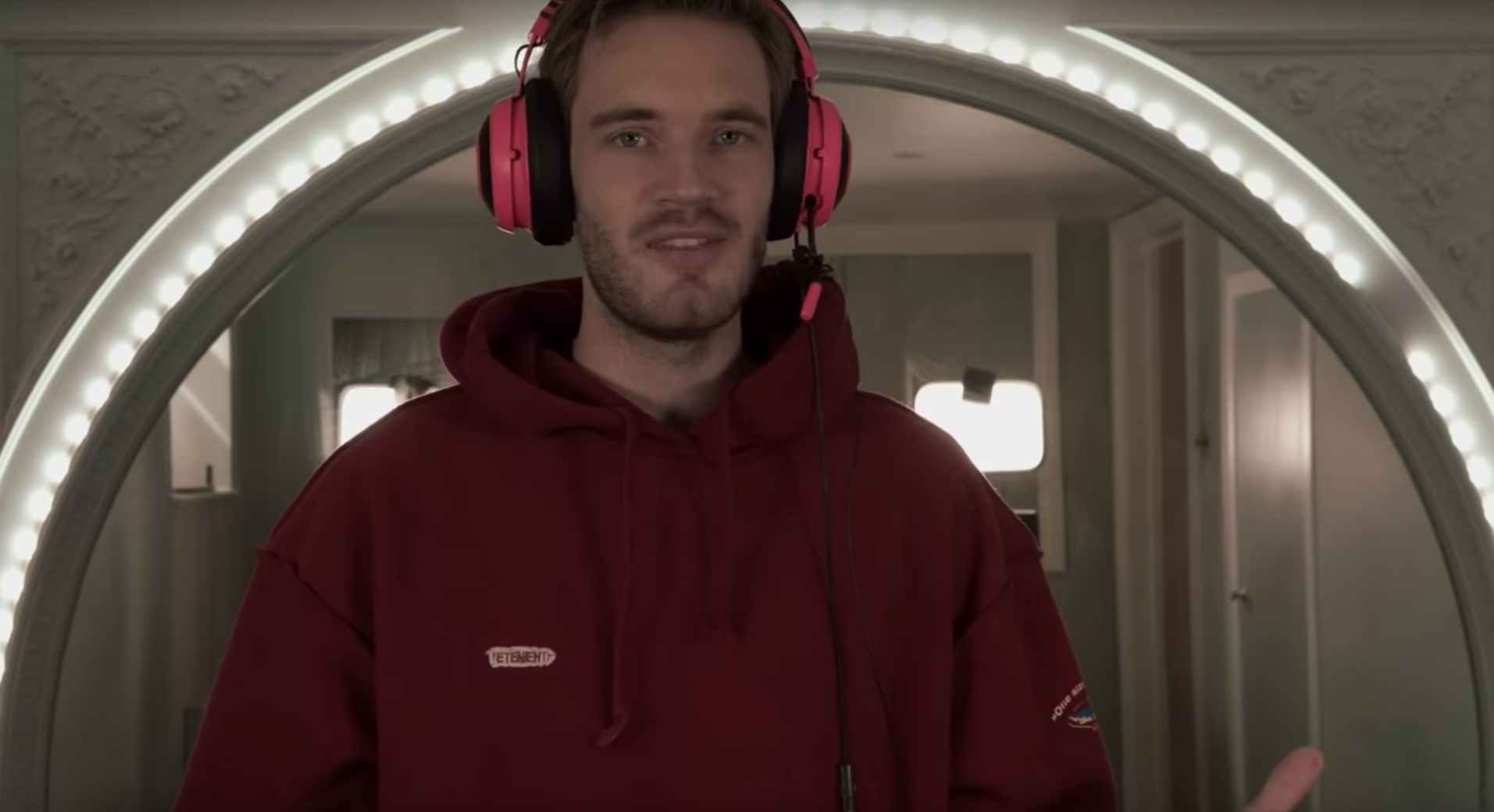 In a video yesterday, Felix “Pewdiepie” Kjellberg announced a generous $US50,000 ($72,862) donation to the Anti-Defamation League, a 100-year-old advocacy organisation founded to combat anti-Semitism. Kjellberg, who was celebrating his 100,000,000-follower touchstone on YouTube, explained in his video that “I feel like I’ve finally come to terms with the responsibility I have as a creator—about 100,000,000 subs too late, but you know.”

It’s unambiguously good for a respected anti-hate group to receive a cash boon, and Kjellberg followed up with a Tweet today to say his motive was earnest. But a contingent of Kjellberg’s followers aren’t convinced he did it out of the goodness of his heart, The Verge first reported.

Hundreds of fans, posting on 4chan, Twitter and Reddit, are spreading the conspiracy theory that Kjellberg was “blackmailed” into donating to the ADL. Several emphatically believe that the ADL threatened Kjellberg with bad press or censorship on YouTube in exchange for the money.

The huge donation was a surprising move on Kjellberg’s part, in part, because ADL CEO Jonathan Greenblatt in 2017 wrote a message commending Disney for severing ties with Kjellberg after “his postings of videos on YouTube containing swastikas and other anti-Semitic content,” he wrote on Twitter at the time. Greenblatt continued on to note Kjellberg’s “wide dissemination of hate speech.” Additionally, in 2018, the ADL cited Kjellberg, among others, under its “Hurricane Of Hate On Social Media” section of that year’s “Top 11 Moment Of Hate On Social Media.”

In an email to Kotaku, the ADL stated that “ADL learned about the potential donation from Felix Kjellberg when everyone else did: when he made the announcement on his channel yesterday. We have not received any communication from him beyond that.” A representative of Kjellberg’s referred Kotaku to a tweet from Kjellberg earlier today in which he explained, “Making a donation to the ADL doesn’t make sense to everyone, especially since they’ve outright spoken against me. I wanted to show publicly that I can move past it and move on.”

Citing the 2019 Christchurch attack, when a terrorist livestreaming his act name-dropped Pewdiepie, Kjellberg said, “My own clash with the [mainstream media] was manipulated as a tool for destruction. I’m not ok with this situation any longer and I’ve felt responsibility to make changes.”

Over the last couple of years, Kjellberg has been the subject of several controversies, including when he said the n-word on stream, hired men on Fiverr to wield a sign reading “Death To All Jews,” and made references to Nazis in the context of jokes. He also promoted a clip from a YouTube channel that had expressed anti-Semitic language. Two mass shooters, including the Christchurch terrorist, have repeated the meme “Subscribe to Pewdiepie” meme. (At the time, the phrase was a meme referring to his ongoing subscriber battle with the channel T-Series.)

In the meantime, the Neo-Nazi website The Daily Stormer endorsed his videos, for a short time referring to themselves as “The world’s #1 Pewdiepie fansite.” PewDiePie has since said he wants “nothing to do with” Nazi jokes. He said, “It’s not me censoring myself, it’s more like I don’t want to be part of this.”

Kjellberg has frequently apologised for his actions. He apologised for the Fiverr stunt, equivocating, though, by saying “I do strongly believe that you can joke about anything.” In 2017, after white supremacists held a rally in Charlottesville, Virginia that resulted in the death of a counter-protester, Kjellberg said he got a “new perspective” on his jokes.

One month later, after saying the n-word “in the heat of the moment,” Kjellberg acknowledged that it was not ok. After the two shooters referenced his channel, Kjellberg called on his fans to end the “Subscribe to Pewdiepie meme.”

At 100,000,000 subscribers, Kjellberg is pop culture. A lot of different kinds of people will follow him. Yet he’s set a tone that many have glommed onto and exaggerated. Kjellberg’s consistent blaming of outside sources like mass media for negative coverage of his antics has sewn a sceptical vein into his fandom.

His “I can say what I want” attitude has made many fans sensitive to concerns over censorship. Now, that’s all manifesting in a conspiracy theory that Kjellberg donated 50 grand to the ADL because they were threatening to censor or defame him.

Several YouTube channels have made videos earning tens of thousands of views casting doubt on Kjellberg’s donation. Jeremy Hambly, who runs The Quartering, asked in a recent video whether Honey, who sponsored Kjellberg’s latest video, encouraged him to donate the money “so the ADL doesn’t come after us.” Other videos are titled “Who is ADL and why are they able to BLACKMAIL pewdiepie,” “EXTORTION? PewDiePie Donates $US50,000 ($72,862) to the ADL,” and “Pewdiepie Gives 50K to the ADL: 4d Chess? Blackmail?”

Several fans on Twitter described the ADL as “hateful” or an organisation that perpetuates “defamation” against people with views they disagree with. One of the most popular tweets under his explanation of his donation says the ADL has “a sordid history of calling their political opponents anti-semites. . . they have been given an outsized authority by tech platforms to censor opinions they don’t want discussed on the internet.” Said another popular comment of the ADL and the Christchurch shooting, “They are using a tragedy to manipulate your emotions, you’re playing straight into their game.”

For decades, the ADL has been tracking anti-Semites and other extremists in an effort to identify potential threats to public safety and wellbeing. With education programs and research-backed reports, the ADL spreads awareness of antisemitism and extremist beliefs and consults with powerful organisations, including law enforcement, to root out hate in local communities. In his recent video, Kjellberg himself describes the ADL as an “organisation that fights bigotry and prejudice in all its forms.”

In the meantime, it appears moderators of the subreddit dedicated to Pewdiepie fandom have been assiduously removing comments perpetuating the conspiracy theory. One attempt to clear things up yesterday in a pinned post by noting that “Felix donated to the ADL. He is not controlled by, employed by or in any other way affiliated with the ADL.” They added, “I have been called a ‘jew,’ ‘rabbi,’ ‘goyim’ hundreds of times in my DMs over the past 24 hours.”

To stay successful on YouTube means constantly surprising audiences with content swerves and envelope-pushing, and, going by his follower count, Kjellberg has mastered that. Kjellberg’s brand was, for a long time, unfiltered chaos and irony, which deflected attempts to decipher the authenticity of his anti-Semitic jokes. Yet alongside that success came outside attempts to hold him accountable for his unhinged behaviour on his huge platform.

It appears Kjellberg may be coming to terms with the power he holds or, at the very least, recognising the negative impact his past behaviour has had on himself and others. He also faced the wrath of Disney, which dropped him, YouTube, which cancelled his premium show, and other creators who found his antics distasteful. Businesses may be ambivalent toward investments’ moral standing but acting unhinged, it turns out, makes you a risky investment.

Recently, Kjellberg has been playing loads of Minecraft, refurbishing his brand into something more wholesome. In the last couple weeks, he posted beautiful videos of his recent wedding and honeymoon. He’s said he’s happier now, in part, because he’s making content more authentic to him.

“I’m nine years older now. I’m still awkward as fuck, but I finally got confidence in myself,” he said in his video yesterday. “I made a lot of mistakes on the way, but I’ve grown. I feel like I have, at least.”