Respawn Is Reviving Medal Of Honor, But As An Oculus VR Exclusive

Electronic Arts’ Medal Of Honor series of military first-person shooters is back in action, although not in the way you might expect: It’s being reborn as a virtual reality game for the Oculus Rift, courtesy of Apex Legends and Titanfall developer Respawn, coming in 2020.

Respawn and Oculus announced that they were working on a “triple-A VR” game together two years ago. Shortly after that announcement, EA bought Respawn. Announced during today’s keynote kicking off the Oculus Connect conference, Medal of Honor: Above and Beyond is set in World War II. A demo will be playable on the Oculus Connect show floor this week.

Leading the development of Above and Beyond is a figure from Medal of Honor’s past: Peter Hirschmann, the producer and writer of the original 1999 game, which was done in collaboration with Steven Spielberg’s Dreamworks Interactive.

In fact, Hirschmann said during a presentation at a preview event held last week in San Francisco, he was in the “room where it happened” in November of 1997 when Spielberg pitched the original Medal of Honor team on the idea of teaching people about WWII through the medium of an interactive game. 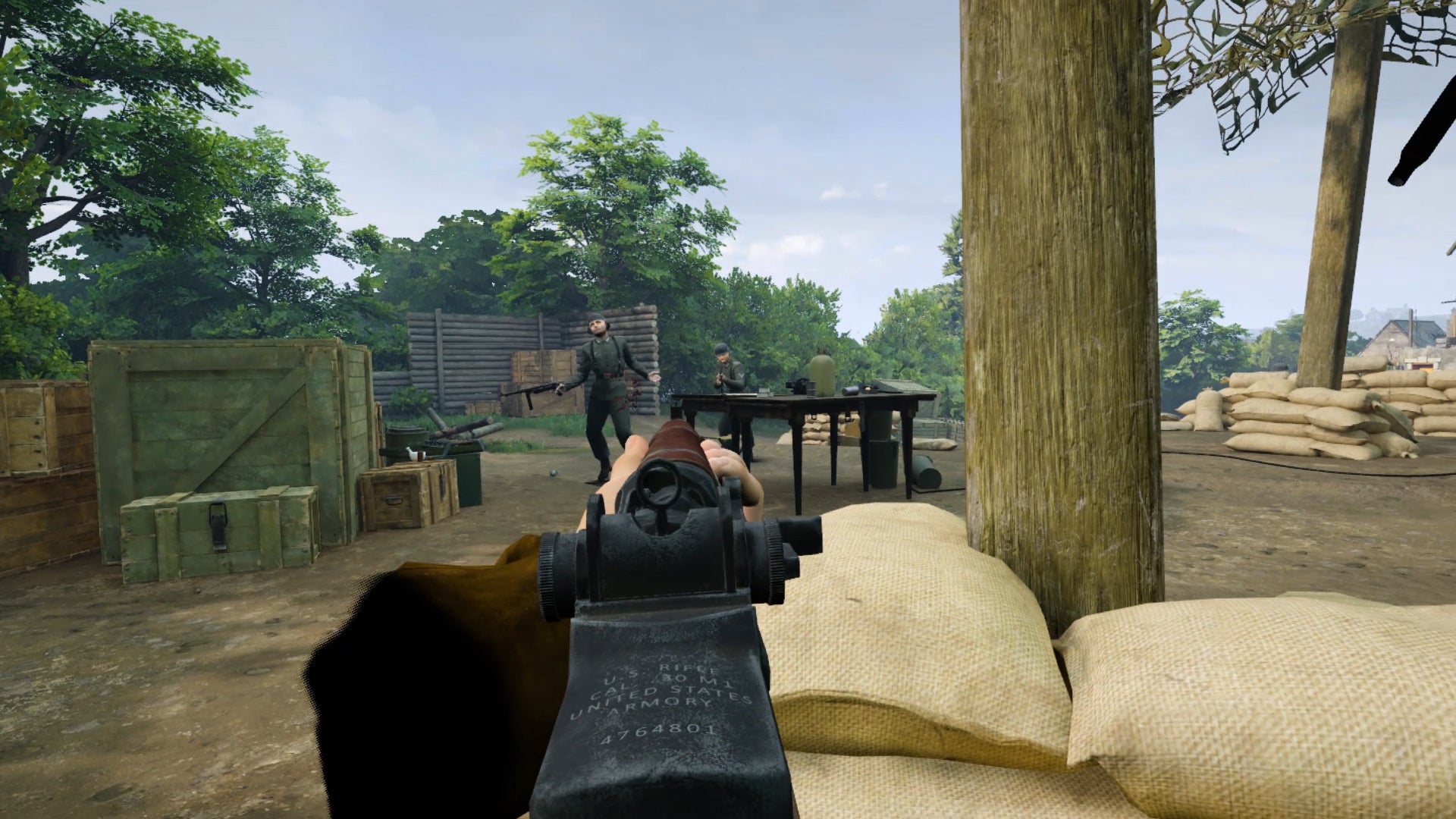 Hirschmann joined Respawn in 2016, heading up a third team within the studio. “A lot of us always had this emotional connection, this emotional longing” to revisit Medal of Honor, he said. “At the exact same time, Oculus came a-callin’.” The maker of the Rift wanted a triple-A experience for its headsets, and Respawn told them that what was required was not just money but time. Oculus consented, and years later, Medal of Honor is almost ready for its 2020 launch.

It’s not just in the personnel department that Above and Beyond reaches back to Medal of Honor’s past. Like the original Spielberg collaboration, there’s a heavy educational element to this release.

Respawn has conducted new interviews with many World War II veterans, the youngest of whom was 93 years old at the time of filming. (You can access these interviews in the game’s Gallery section.) They even went so far as to partner with the organisation Honor Flight, which flies veterans to memorials in Washington, D.C., to bring some of the veterans back to Europe to revisit the exact places they fought in for the first time.

360-degree VR videos of some of these locations let you get up close and personal with them, as well. Respawn is also scanning some archival footage from the Library of Congress into 4K for the first time ever.

“We’re trying to make the most authentic World War II game possible,” Hirschmann said. “That does not mean we’re trying to make the most realistic one.” You’ll use the Oculus motion controllers to pick up, hold, aim, and fire your weapons. Need more ammo? You’ll need to reach down to your left hip and grab some, pop it into the gun, then reach over to pull the slide back. This part is fun. “You know what’s not fun?” said Hirschmann. “Trying to put it back in the damn holster.” If you let go of your gun, it’ll go back to your hip. That’s emblematic of the difference Respawn is drawing between “authentic” and “realistic.” 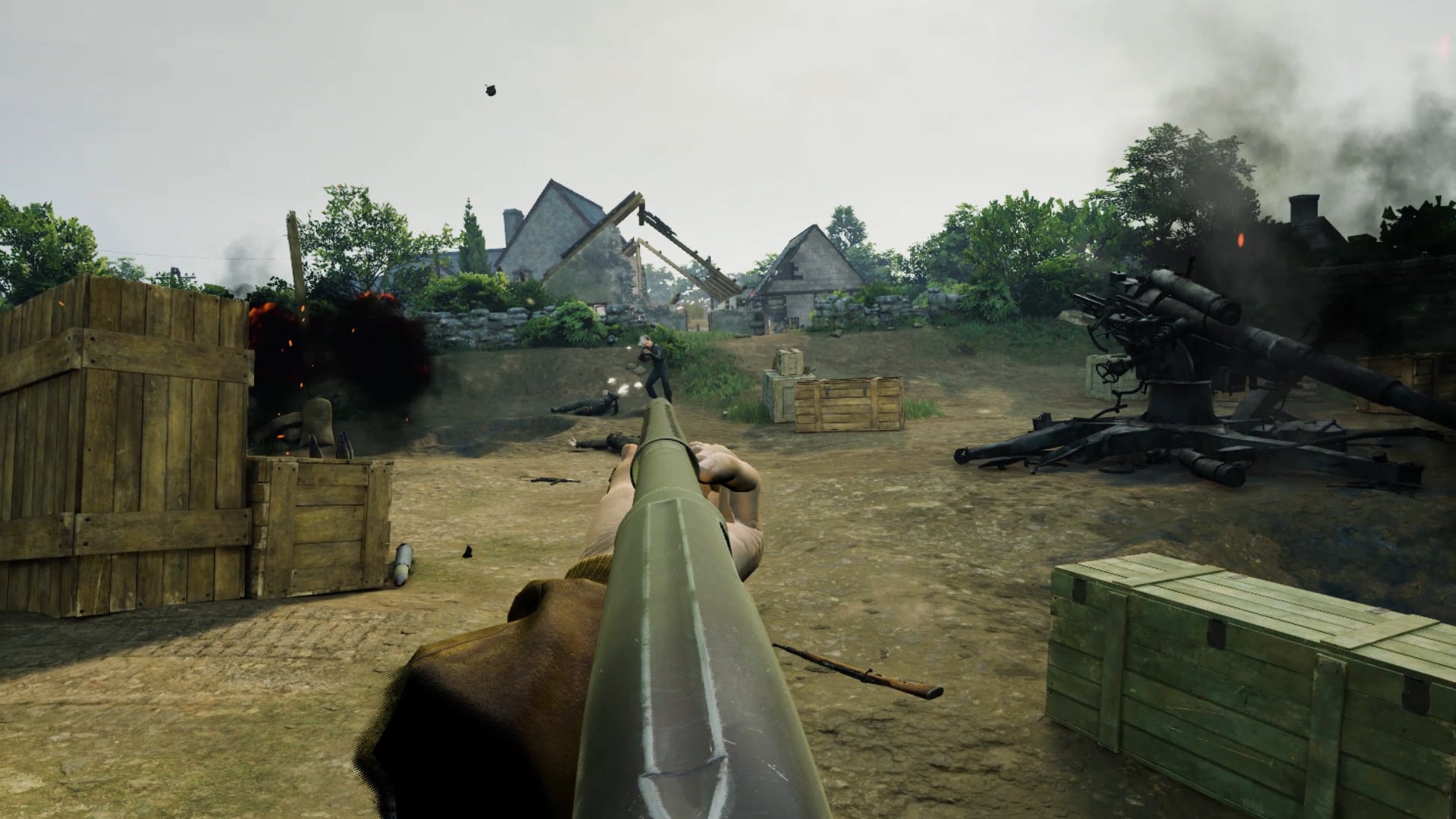 While Above and Beyond will have a “full suite” of multiplayer modes, Respawn isn’t talking about that at Connect. It’s showing off the single-player campaign, which will be about 10-12 hours long and spread out over 50 different levels. (Players who want to explore every inch of the levels and find all of the hidden details and secrets could see their playtime double, Hirschmann said.)

The game’s three acts are as follows: One is the Resistance, putting you inside Nazi-occupied France prior to the invasion of Normandy. Two is the invasion, beginning with an Omaha Beach level. Third is about destroying the Nazis’ “secret weapons,” such as the hydroelectric plant in Norway.

Playing a first-person Nazi shooting game is, frankly, terrifying. There’s a big difference between the tutorial area, a firing range where you get to play with guns and try sniping at enemies from a distance, and the first demo level, where you’re dropped into a tiny room in the back of the kitchen at the Gestapo HQ and you’re meant to start walking around and finding Nazis to off. It’s a definite feeling of “Oh crap, I don’t even want to walk through this first door; what if there’s a Nazi over there?”

Making things more difficult is the fact that just sighting down the barrel of a gun with motion controllers in VR is not easy. That action that’s so natural with twin sticks carries a big learning curve when you’re holding your hands up in front of your face. Fortunately, the Nazis balance this out by being extremely stupid.

Most of the time they’re just standing out in the open and occasionally firing at you, like big easy targets. Even with all this advantage, it’s still quite challenging to engage each enemy. If you need to heal, you pull a syringe off the inside of your left forearm and jab it into your chest. If you want to throw a grenade, you pull the pin out with your left hand — or your teeth. 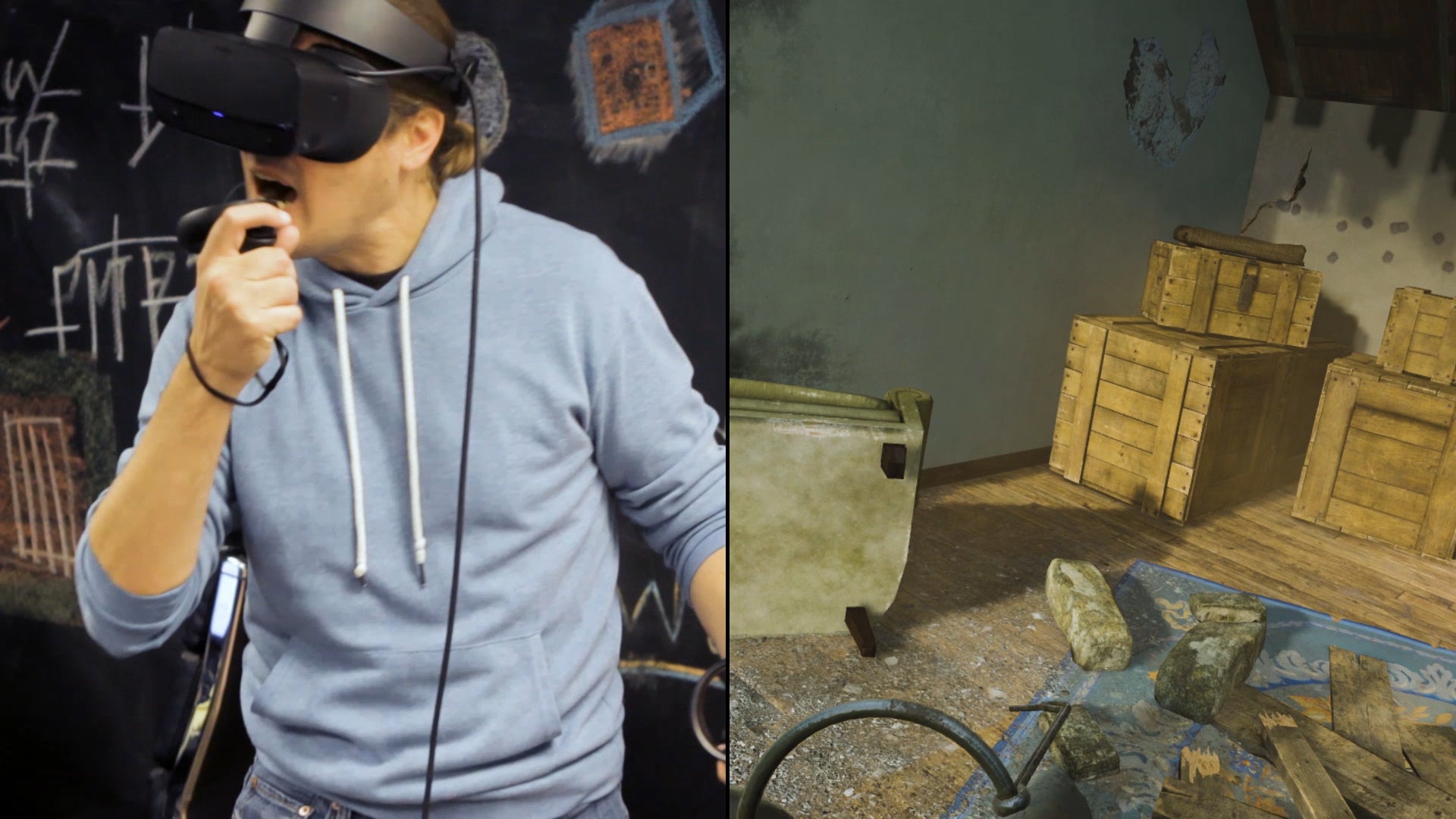 At the beginning of one level set on a snowy mountain path, I found myself at the top of a hill near a waist-high boulder, and I knew I’d have to physically duck down behind it for cover.

At that point, one of the Nazis did decide to close the gap between us, running around the rock but still staying a respectful distance from me. Meanwhile, I’m down there on my knees fumbling at my waist for an ammo clip hoping that this guy just stands and watches me for a while longer before deciding to shoot me and end it all.

Respawn doesn’t want to “overgorify” the scenes, though. Dead soldiers tend to just collapse to the ground without intense displays of carnage. “We don’t need excessive amounts of gratuitous gore,” Hirschmann said. “Hopefully the horror of combat comes through in you role-playing it.”

There will also be downtime, including segments in which you’re disguised as a German soldier and thus able to wander around and get close and personal with the enemy, seeing them going about their lives, listening in on conversations. Puzzles and interactive elements will let you do more than just shoot, too, like having to hit the keys on a piano in the correct sequence to get to a secret area.

When asked during a roundtable Q&A following the demos, Respawn and Oculus were cagey about the possibility of Above and Beyond coming to Oculus Quest, the wire-free standalone platform that makes VR much more comfortable and accessible. They’d only say that Respawn “loves the Quest” and that the game is “exclusive to Oculus,” the apparent implication being that it’s not exclusive to the Rift hardware specifically.

For now, it’s clear that Medal of Honor: Above and Beyond is Oculus’ biggest play yet to get gamers to buy a Rift headset. It’s tough to know based on a short demo if the full game will truly be a tipping point that gets players buying a Rift, but that’s the idea.

“Great software sells great hardware,” Hirschmann said. “You can have the most amazing doohickey or computer or console, and if there’s nothing fun to play on it, who cares?”