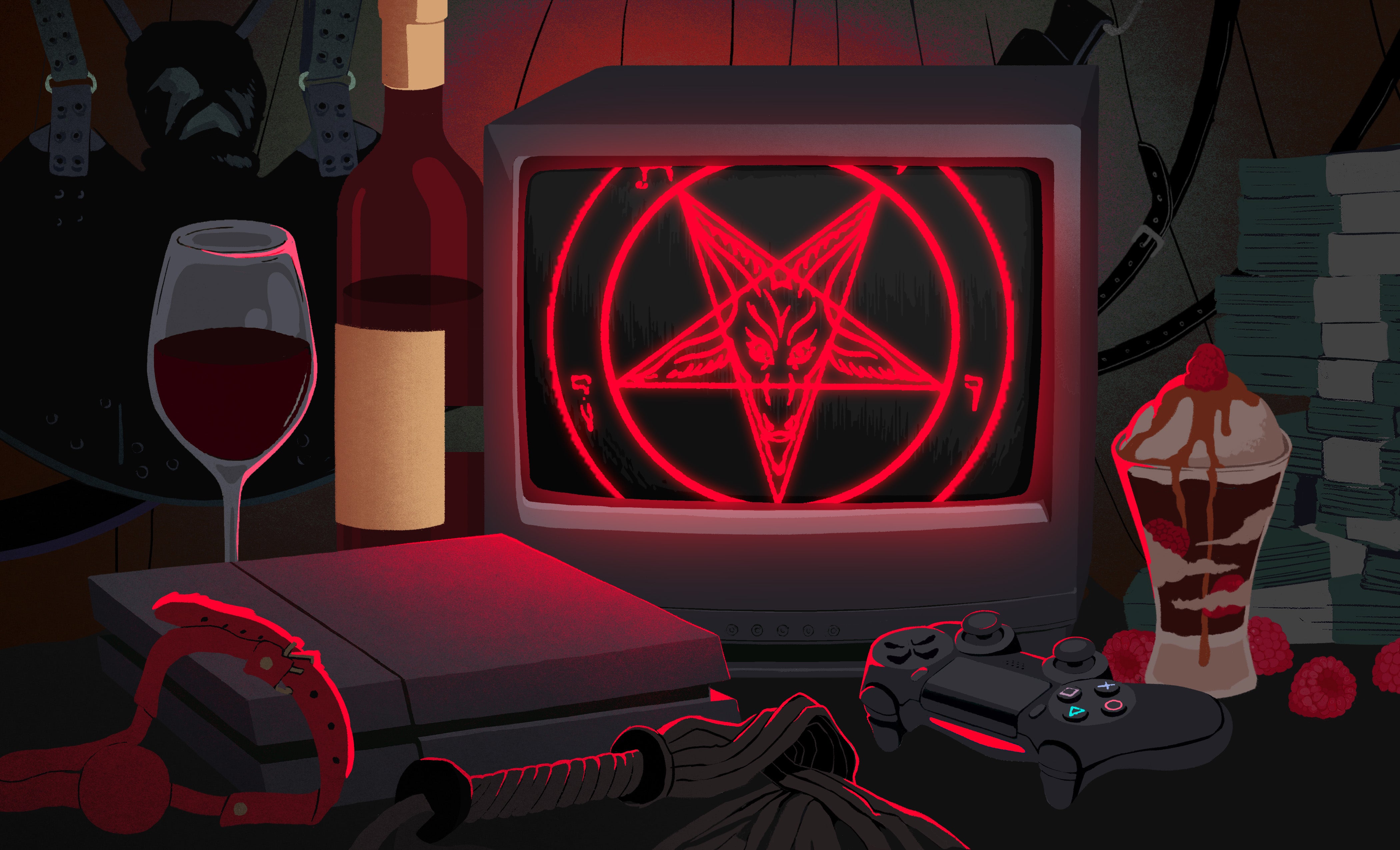 In survival game Ark: Survival Evolved, Church of Satan member Citizen V (his “under the horns name”) ignores the naked and empty-handed low-level players who supplicate at his tribe’s floating base. It’s an opulent base where his tribe hatches pteranodons and cultivates their naval armada.

“Anyone worth my time, who enriches my life and brings something to the table — those are the people worth going out of your way for,” Citizen V told me over the phone. He doesn’t kill new players on sight. Not all new players are useless, he reasons. If they’re consistent, he’ll put them to work, maybe give them food and water.


“The more people we can get to do stuff for us — that’s great,” he said. “Responsibility to the responsible.”

Citizen V was quoting a mantra vital to Church of Satan members, a call for self-accountability. Despite the conception of Church of Satan devotees as Hot Topic-frequenting edgelords with no real belief system, the Church of Satan was founded by Anton LaVey in 1966 as a movement that would oppose the status quo and the damage done by traditional religious and social values. Satanists see traditional Christian vices as great human assets.

Pride, individualism and influence are their bread, butter and blood. Satanists seek to amass power and experience pleasure, and that’s by-the-book life advice. To that end, over half a dozen Satanists I interviewed say that games are playgrounds for their Satanic virtues to run free.

Left 4 Dead? Satanic. Call of Duty? Satanic. Minecraft? Mega-Satanic, the Satanists I spoke to said. “You can build every little thing — put a torch where you want it, a tunnel, a walkway, a moat. That’s very Satanic,” explained Satanist reverend John H. Shaw.

For decades, games and Satanism have had some connection in the American public consciousness.

During the Satanic Panic of the 1980s, American parents feared the supposed Satanic influences of games like Dungeons & Dragons and Doom. Back then, your average group of kids rolling 20-sided die in a dark basement looked a lot like a blood-worshipping Satanic cult to pearl-clutching parents. Games’ rampant devil imagery didn’t help.

“Almost anything that had some devil symbolism or fantasy symbolism was deemed Satanic and linked to fabricated stories of ritual abuse and baby-killing,” Church of Satan reverend Raul told me.

To him, though, it makes sense that Satanism was blamed for hype around fantasy media. “Part of our philosophy is that Satan has always been the scapegoat, the thing you blame for the evil of man,” he said.

“But man himself is the one doing all these things. God gets all the credit for the good stuff, but Satan gets the blame for all the bad stuff.”

While it’s true that Satanists weren’t committing mass infanticide or animal sacrifices, there is a small kernel of truth to the view that games are fertile soil for Satanic beliefs to take root. According to Satanist gamers, few things are more Satanic than video games.

Raul pointed out three tenets of Satanism that thrive in games: indulgence, meritocracy and “total environments,” customisable spaces that the Church of Satan calls “literal pleasure domes and places of amusement and delight.”

In Eve Online, pride-fuelled scams are actually encouraged. Last month, a massively destructive long con had one well-trusted player scoop up all the holdings of a 4,000-person alliance.

Although he would not disclose specifics for fear of blowing his in-game cover, Raul describes himself as an espionage master. Using multiple identities he’s developed over the last decade, he spies on Eve Online factions to solicit intel and slyly relay it to allies in faction warfare. “I would consider Eve one of the most Satanic games out there because you have so much power as an individual,” Raul said.

“You gain sovereignty of part of the universe. It’s a battle for control of space, expanding influence. It exercises parts of my philosophy I feel are healthy.” It’s a place for him to worship his own potential as a forceful actor in the world around him.

In games, power can mean more than political influence. Church of Satan reverend John H. Shaw told me that the more money and flashier threads he earns in Grand Theft Auto V, the closer he feels to his religion. “You get better cars, more money, you’re more successful, you buy houses,” Shaw told me over the phone. “That’s Satanic.”

Shaw was 13 when he borrowed a copy of Anton LaVey’s The Satanic Bible, Satanism’s core text, from his neighbour. Hidden from his overbearing mother, he tore through it. Shaw recalled how the core values of Satanism “spoke to me personally”.

Pride, to him, can be worn as an outfit — an emphasis on Satanism’s focus on aesthetics. In GTA V, Shaw gets haircuts. He adorns himself with tattoos. He’s mindful of his outfits and his cars — the way he shows his material success to other players.

“I love the fact that, when you put on a pair of pants in GTA, they fit correctly,” he said.

“Ultimately, self-preservation is the highest law.”

For Satanist Misty Tyers, her affinity for material wealth and self-preservation recently puppeted the tiny rogue character she made in her Dungeons & Dragons game. Her party had just commandeered an air ship before a small army of orcs ambushed them. “In that moment, I considered the possible outcome if I stayed and helped defend the ship with the party as opposed to taking off to save my own skin and leave them to die,” Tyers told me.

In the end, she decided to stay and lend a hand — but not necessarily because she’d bonded with them. If she stayed and fought, she told me, maybe a few of her party members would die. That meant she’d get a bigger share of the quest’s reward. After two comrades became orc dinner in the fight, her reward was handsome.

When their lust for something pulls them too far in one direction, practising Satanists will likely remind themselves that immoderation, like a rubber band, can shoot them back into a place where they’re powerless. Anything in excess is counter-productive, the reasoning goes.

Satanists will lose their freedom to be proud or vengeful if they’re so prideful that they’re disliked or sent to jail for exacting revenge. Raul pointed to Eve as an example, noting that a furious player threatened to chop off the hands of the traitor who made away with all those holdings. That player was swiftly banned. “Ultimately, self-preservation is the highest law,” he said, again quoting the mantra, “Responsibility to the responsible.”

“We advocate indulgence, but not compulsion,” Shaw explained. “When you steal a car and there are police in the area, now you have police after you. There are consequences,” he said.

Although Grand Theft Auto V is a hedonist’s wonderland, it’s also a perfect microcosm for Shaw to practice his version of self-awareness. “In real life, we have all had these thoughts and we bottle them up inside until it either lands us in prison for blowing our lids, or it turns into cancer.

Games are an outlet to rid ourselves of the negative or unproductive thoughts, just as much as providing us with the fantasy that real life tends to lack,” Shaw said.

“Running over people, shooting people — that’s not Satanic at all. That’s just fantasy.”

This article was originally published on 06/10/17.