Star Wars, at its core, is a very silly franchise. A delightfully silly one, more often than not, fascinated with minutiae and over-explanation in few ways other sagas would be. But one of my favourite, most enduring silly facts about it is the galaxy far, far away’s fascination with starfighters named exclusively after an alphabet that only sort of exists.

The movies gave us the X-Wing and Y-Wing, and then the B-Wing and A-Wing and then, decades later with prequels like Revenge of the Sith and Rogue One, the V-Wing and U-Wing. Star Wars’ Expanded Universe decided that if you were going to make a new starfighter, there’s a good chance it should be awkwardly shaped to try and look like a letter in the Latin alphabet (sorry, sorry, High Galactic).

While we never really got up to a full 26 before Disney rebooted the Star Wars canon, we still have a healthy arsenal of Alphabet fighters. So, to celebrate the B-Wing and Y-Wing’s return in The Rise of Skywalker, here’s our very serious judgment of this very specific designation of starship.

A word of clarification going in: While we are dipping back into the old Expanded Universe for a few of these, we’re only going for ships officially referred to as “-Wing” starfighters, and only those that used the Latin/High Galactic alphabet, instead of the equivalent in Star Wars’ more typical written symbology, Aurebesh.

No M-Class or G-Types allowed, or Aurek-Classes. No uglies like the Z’ceptor, either! So, without further ado… 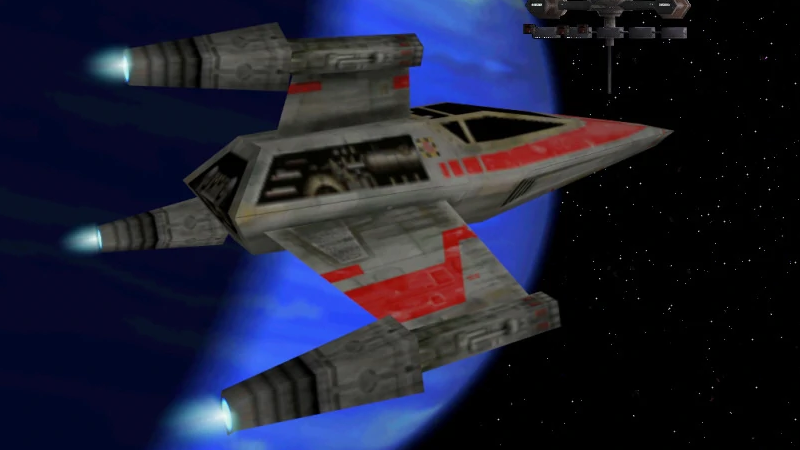 The T-Wing, in all its terrible, unloved glory. (Image: Lucasarts)

Not only does the T-Wing, first introduced in the excellent game TIE Fighter, not even look like a T, its whole story is that… it kinda sucks and no one liked it. It was meant to be a replacement for the A-Wing as the Alliance’s primary interceptor fighter. But it was bought on the cheap, badly made, less manoeuvrable, and lacked in shields and firepower. The Alliance sold its squadrons off to whoever would pay for them. Which, considering it needed every ship it could get their hands on, said a lot.

All an A-Wing is good for. (Image: Lucasfilm)

As previously established, it sucks and is flown exclusively by people who suck. I’ll be accepting no further questions at this time. 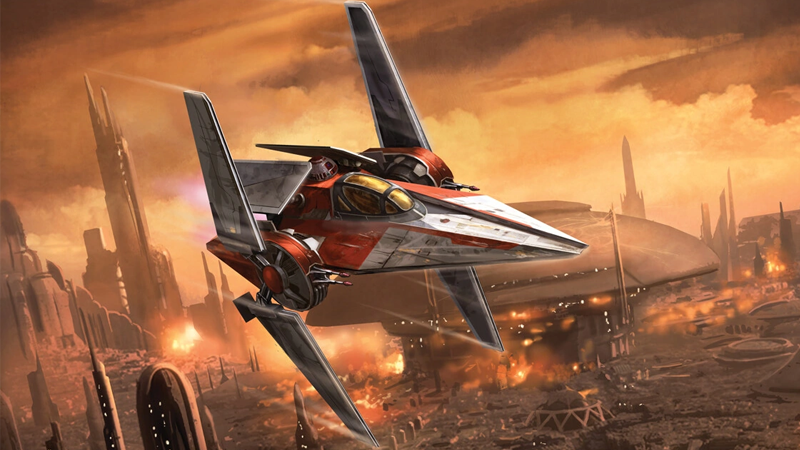 A V-Wing flies over a burning Senate during the battle of Coruscant. (Image: Mariusz Gandzel, Fantasy Flight Games/Lucasfilm)

Once again, if you’re going to go with the alphabet fighter nomenclature, your ship has to at least attempt to look like the letter it’s named for. The V-Wing is an interesting design, especially as, canonically speaking, it’s meant to evolve into the TIE Fighter after the Republic is overhauled into the Galactic Empire. But… what part of this ship is a V? The wings are so subtly angled that they don’t do a V-shape justice. And the way the thing flies in attack mode makes it look more like an H than a V. The V-Wing is an alphabet fighter in search of an identity. 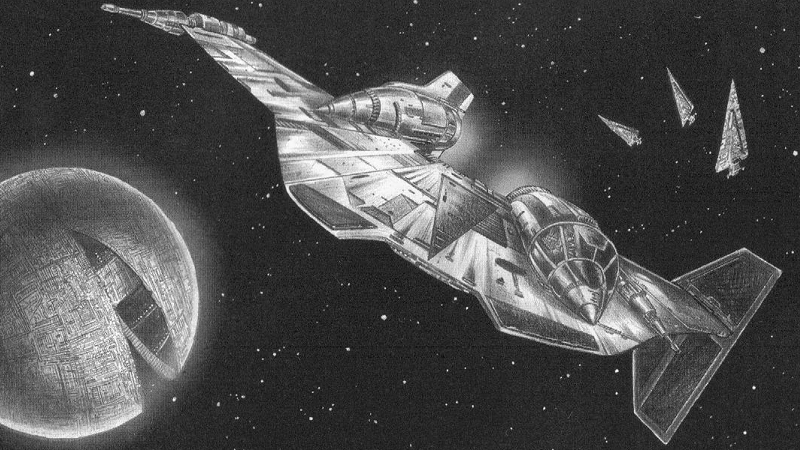 The D-Wing makes its one and only appearance. (Image: West End Games)

You have to admire the D-Wing — which, hilariously in its singular appearance for ancillary material in the West End Games Star Wars RPG, was actually designed as a potential prototype for the Empire by Tay Industries, a corporation hoping to muscle in on Sienar Fleet System’s longstanding relationship with the Imperial Navy.

It’s just a big ol’ flat disc in the vague shape of a D, trading what could be a spindly letter-inspired design for a big sheet of space metal. But beyond that, it’s just kind of a mishmash of design elements that looks awkward.

I’ve previously called the E-Wing — a heavy fighter intended to be an X-Wing replacement in the early days of the New Republic, until basically most pilots said “nah, mate” and stuck with the X-Wing after the new ship developed a bunch technical errors — a silly starfighter. And I stand by it because while yes, it is basically shaped like an E, fitting the requirements of an alphabet fighter, it does so by basically just being an X-Wing with the top two S-Foils (Strike Foils) shaved off. 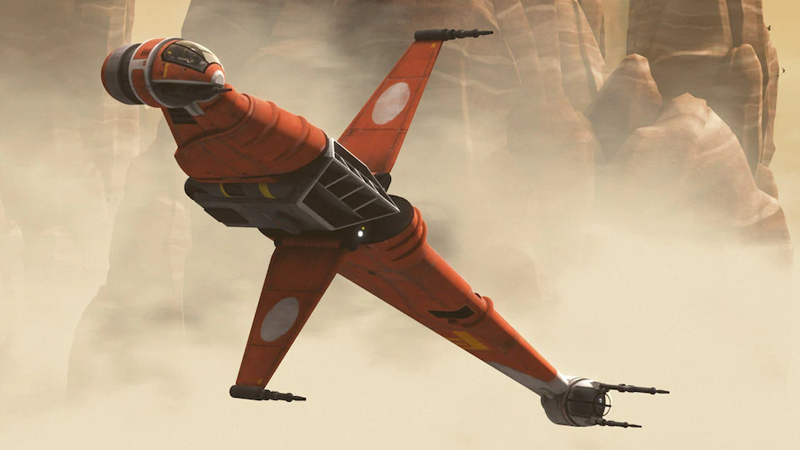 Now, this might be controversial. A classic, original trilogy ship being so middle-of-the-road in this ranking! But, as cool as the B-Wing is — it’s a chunky, tough, badass ship designed to punch a nasty hole into anything stupid enough to get near it — we have to address the elephant in the room…

Neither of its traditional attack positions evoke a B-shape all that well. If anything, it’s more vertical, S-Foils-open position would do a nobler job of being a T-Wing than the actual T-Wing does. But alas, as great a bomber it is, it gets severe points off for this grievous lettering misjudgment. 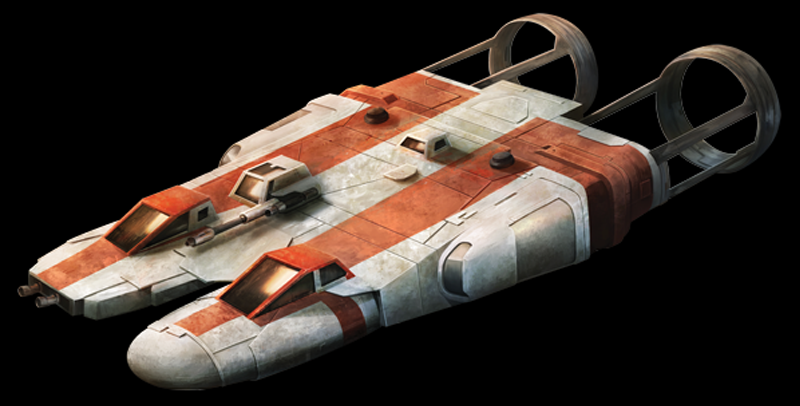 In awe at the size of this H-Lad. (Image: Fantasy Flight Games)

Given that there’s already another ship on this list that could’ve swiped the H-Wing’s moniker off of it, that it holds onto it is a respectable achievement. But when it would’ve been easy to make the H a spindly-looking thing, like a V-Wing or a TIE Fighter, instead, it went the other way around — and I am, quite frankly, in awe at the size of this lad.

The chunky, punchy fighter was, like the B-Wing, intended to be a workhorse tank, shrugging off fire while blasting holes in foes with heavy weaponry. But, unlike the B-Wing, it does so while still retaining its alphabet shape… just about. It’s almost too thicc for its own good.

The U-Wing in its U-iest, S-Foil-locked flight mode. (Image: Lucasfilm)

Star Wars’ first cinematic alphabet fighter since the V-Wing — the first new original-trilogy-era fighter design to be seen on screen in decades — had a lot to live up to, and for the most part, it does.

It’s a little ugly, thanks to being a troop transport-meets-weapons-platform more than it is an air superiority fighter, but that’s part of its charm. With its S-Foils all the way open, it could almost do double duty as a V-Wing, but as is, the inverted U-Shape is a cool take that retains its alphabet roots but subverts the design expectation in an interesting way. 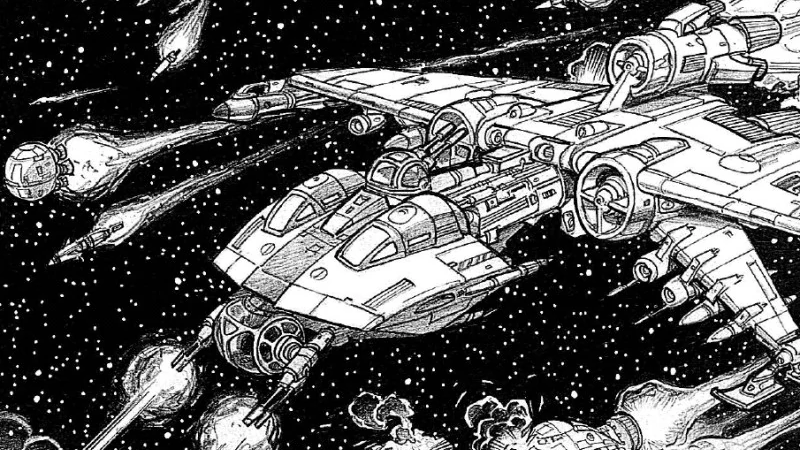 The K-Wing is hilarious, in a good way. Not only because it just barely manages to be a recognisable K until you tilt your head a bit, but in combat against it you’d barely have time to do that head-tilting, because this damn thing has enough weapon hardpoints — 18! — to shred you to a billion itty bitty pieces before you could even dare to mock it for being a K that’s fallen over.

It keeps the shape, just about, but while that would be a downside for most other ships on this list, the K-Wing triumphs by basically being mean as hell for a lopsided letter.

X-Wing gon give it to ya. (Image: Lucasfilm)

It’s the pilot’s starfighter: a solid all-rounder that balanced firepower, defence, and manoeuvrability with a truly beautiful design. When those S-Foils lock into attack position, and the X-shape makes itself known, you know some good spaceship action is about to go down. It’s a legend for a reason.