Steven Universe: The Movie’s New Fusion Is Remixed Storytelling At Its Best

When a charmingly to-the-point Steven Universe fan asked series creator Rebecca Sugar whether The Movie would introduce any new fusions — Gems whose arrivals have always been major events for the show — she smiled and insisted that everyone would just have to wait and find out. And wait we did.

The movie centres around a new villain coming to Earth to kill Steven and it was clear that most of the Crystal Gems would get in on the fighting. So it stood to reason that if new fusions were going to show up, they’d likely be some combinations of Lapis, Peridot and Bismuth.

They were the final core members to join the team during the course of the series’ run so far, and though Lapis and Peridot (to a lesser extent) have had arcs involving fusion, neither of them had a chance to develop a healthy relationship with it the way other characters have.

In retrospect, that might have been a bit too predictable a direction to go in, because Steven Universe: The Movie’s new fusion has little to do with any of the full Gems, and everything to do with Steven’s relationships with one of the most important humans in his life.

After the new Homeworld Gem Spinel successfully manages to poof Garnet, Amethyst, and Pearl with a unique weapon that effectively resets a Gem to its factory settings, Steven’s left to figure out how to restore all of the Gems’ memories and personalities.

What Steven eventually realises — ironically with Spinel’s help, as she too ends up getting poofed with her Rejuvenator, transforming her back into a friendly version of herself — is that the key to putting everyone back to normal is giving them powerful reminders about core parts of their identities.

When you consider how emotionally close Steven and Amethyst are, it makes sense that they were the first pair to successfully pull off a human/gem fusion during the series, and even more sense that hers are the memories Steven’s able to restore first.

Even though Steven was able to orchestrate the right circumstances to help Ruby and Sapphire refuse, the Garnet they become is her proto-form, and not the full person she eventually became. Pearl, on the other hand, is all too comfortable being back in her more subservient role that all Pearls are seemingly built for, but due to a bit of a mix-up during her regeneration, she’s imprinted on Greg Universe rather than the holder of Pink Diamond’s Gem. 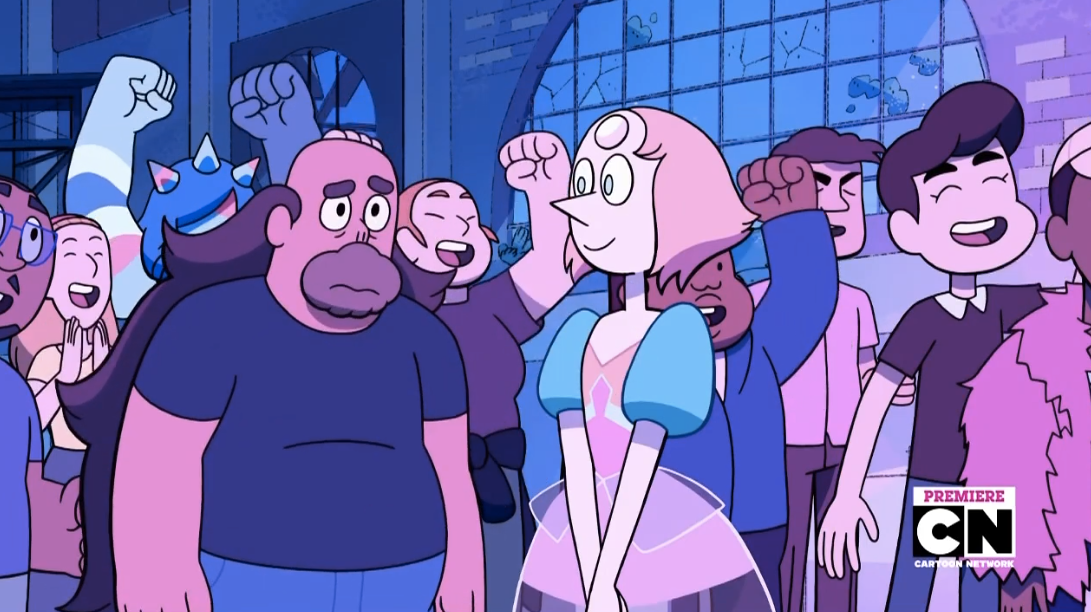 Greg and Pearl at a concert. (Image: Cartoon Netwok)

As plot devices, the Rejuvenator and the quests to get everyone’s identities back work both as refreshers about major plot points from the series and clever reimaginings of characters’ origins that illuminate new things about them.

Even though Rose Quartz/Pink Diamond isn’t around to capture Pearl’s heart and turn her into a freedom fighter, Amethyst reasons that Greg could still do some of that for Pearl by bringing her to a big, dramatic event that could awaken her innate rebellious side.

The idea to bring Pearl to a rock show is actually inspired. As odd as the circumstances all are, what Steven, Greg, and Amethyst are really doing is guiding Pearl through a reimagined, condensed version of the whole of her relationship with Rose Quartz, from its highest highs to its lowest lows.

Literally being confronted with Amethyst shapeshifted into Rose does nothing for Pearl’s memory because she has no real frame of reference for who Rose is anymore. The love she had for Rose she now feels for Greg, simply because his was the first voice she heard as she reformed. It raises some interesting ideas about the nature of a Pearl’s love because, at face value, it seems as if Pearls might not exactly have much of a choice to feel anything but an undying dedication to their superiors.

As Pearl restates to Greg that she’ll serve Greg as long as he exists, it dawns on Steven and Amethyst that it wasn’t simply meeting Rose that played a significant role in shaping the person she became, it was watching both Pink/Rose cease to exist. Of course, killing Greg’s not an option, but Steven wagers that there is a way for Greg to give up his physical form. And so, they fuse.

The new Gem Steg says it best himself: “It’s a big ole universe out there” and he’s a rather large and muscular part of it. But Steg’s also the very mind-trippy embodiment of the Gem that was once the love of Pearl’s life, the man who stole that love away from her, and the child who was born of that love.

On a more literal level, Steg’s a four-armed rocker with outrageous hair and an undeniable sex appeal that literally knocks people away with its sheer force. Whether or not the power is unique to Steg among all of Steven’s fusions is unclear, but Steg demonstrates the ability manifest a pink aura around himself and others, allowing them to fly through the air.

As he uses this power on Pearl, it begins to sink in for her that, at least for the time being, Greg’s quite missing, and as alarmed as she is by that, she can’t help but respond to Steg’s urging her to open her mind and remember who she is.

As Steg sings to Pearl “Independent Together,” what Steven Universe: The Movie emphasises is that while Pearl may have begun as a servant to her Diamond, the greatest gift Pink/Rose ever gave her was setting her free, first from her servitude, and then, tragically, from having to live with Pink/Rose.

Heartbreaking as Pearl’s story of loss has always been, as Steven Universe has gone on, it’s been difficult to argue that Pink, despite always wanting to do the right thing, had a nasty habit of treating the people she loved rather callously.

It’s taken Pearl years to even begin to move on and begin to fully live her life for herself, but that growth has been good for her, and it all begins to come rushing back to her as Steg sings his song.

Steg could have easily made a big flashy appearance and given the fandom heart palpitations and that would have been just fine. But instead, Steg shines a new light on one of Steven Universe’s most complicated stories about loss and love, and he looks damned good doing it.