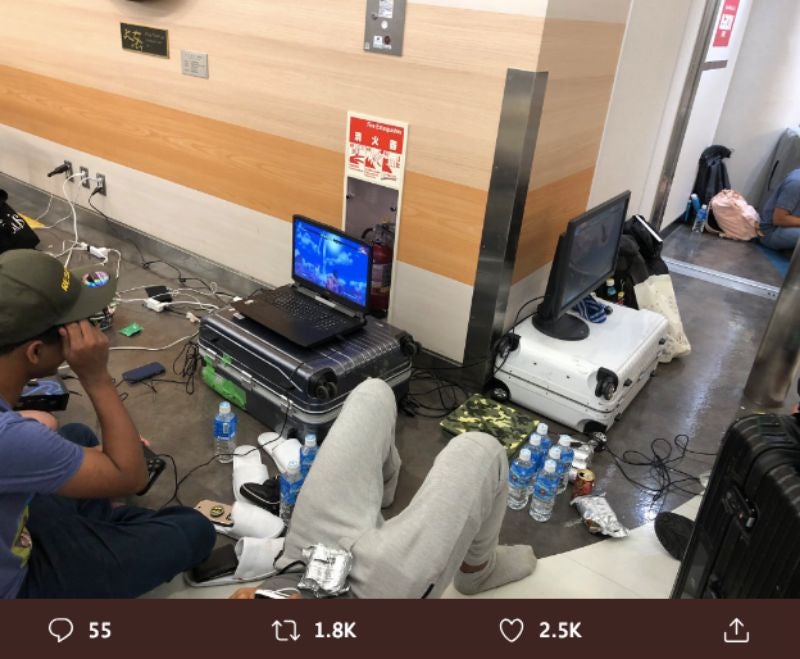 Earlier this week, a typhoon hit Japan. According to reports, nearly seventeen thousand people were stranded at Narita Airport, outside Tokyo. Flights were cancelled, and it was difficult to get trains and taxis. Pro fighting game player Naoki “Moke” Nakayama was among those who were stuck.

Travellers had to wait overnight for the trains to run. The airport passed out crackers, water, and sleeping bags, reports Mainichi.

To pass the time, he played games with others. Innocent enough, right? Well… Moke started getting criticised for using the airport’s electricity without permission and for blocking a fire extinguisher. He was called out for setting a bad example as a pro gamer.

The criticism was so severe that he even issued an apology for using the airport’s electricity without permission and for blocking the fire extinguisher.

Moke writes a long apology for using public space in Narita airport and their electricity, blocking a fire extinguisher, and not being a considerate member of society and role model as a pro gamer.

I think people can focus on the wrong things in Japan sometimes. https://t.co/NL3C6TCw8y

Moke even sent an apology to the airport and added that, as a professional gamer, he will think more about his actions.