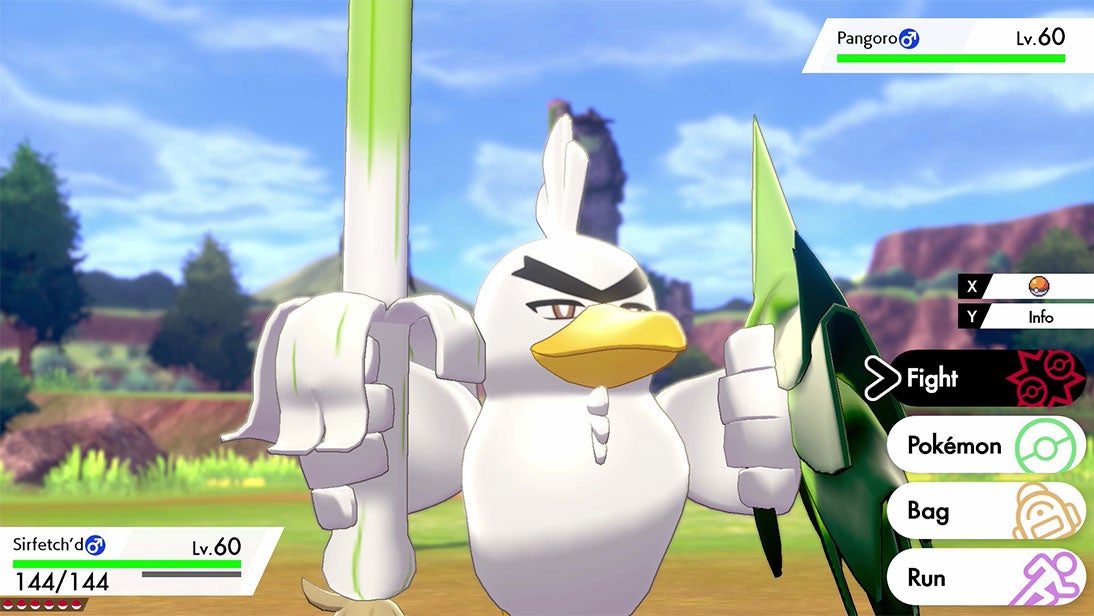 Farfetch’d, the leek-carrying bird pal that’s been around since the original Pokémon games, is finally getting an evolution of his own. His buff new form, appearing exclusively in Pokémon Sword, is called Sirfetch’d, and the internet has some thoughts about this smug bird knight.

According to the official Sword and Shield website, Sirfetch’d is incredibly noble, to the point that “they are often chosen as a motif for paintings.”

They fight until their leek finally withers, retiring after they’ve lost their veggie weapons. Farfetch’d is notoriously weak as a Pokémon, and as other Pokémon continued to get new evolutions beyond their debut generations, fans wondered if the Wild Duck Pokémon would ever get one of its own to make it more viable in battles.

Sirfetch’d keeps his impressive eyebrows and gains a literal sword and shield — perfect fodder for emotional internet reactions and fanart. Of course, the fact that the Pokémon had been rumoured (and leeked) for a while means there was time to prepare for this reveal. Behold:

Sirfetch’d is going into battle and needs your strongest potions#PokemonSwordandShield pic.twitter.com/LXsy3SfOSr

You know I'll drop everything to draw new Pokemon stuff.
really like Sirfetch'd's design even if the eyes do creep me out a little.
… okay they creep me out a lot#PokemonSwordandShield pic.twitter.com/2LSp82Rdy7

Saw the "Sirfetch'd" #pokemon thing. Took a shot at doodling it. Fingers crossed that poor bastard Farfetch'd gets an evolution of some sort. Been needing it since Red and Blue. pic.twitter.com/UQQufA5zNO

Every time I see Sirfetch'd I feel like he just chortles "knave" in my general direction and it's bringing me down pic.twitter.com/C170iBVFvg

"They are calm and collected, and they make a point of always battling fairly. They are so noble in battle that they are often chosen as a motif for paintings. Of particular note is a painting—famous in the Galar region—that depicts a duel between a Sirfetch’d and an Escavalier." pic.twitter.com/tc97yB34D8

I cannot believe we have gone from “hello it is nice to finally meet you sir” to “your daughter calls me daddy too” pic.twitter.com/DDktsENNsP

Sirfetch'd: I beseech you, thy honorable servant. I have had much of this delicious treat, but I wish not for more!

Me: sure you little weirdo, keep eating

Congratulations to Sirfetch'd for joining Pokémon! When I'm President, you have an open invitation to meet with me in the White House.

Happy Knifeduck Day, indeed. There’s still questions to be answered. If Sirfetch’d is a knight, does that make him a cop? Why does his outline match up so well to the notorious glitched pokémon Missingno? These aren’t real questions and I’m mostly making them up, but maybe we’ll get answers. For now, we can all bond in our shared appreciation of this buff duck lad.