Often times, when we’re talking about how “alright” the kids are, what we’re really talking about is how we, as a society, are doing — because the children are the future, and if they’re not doing well, we’re all probably screwed more than we know. For everyone living in this week’s best new comics, the kids are doing from from all right. They’re doing terribly. 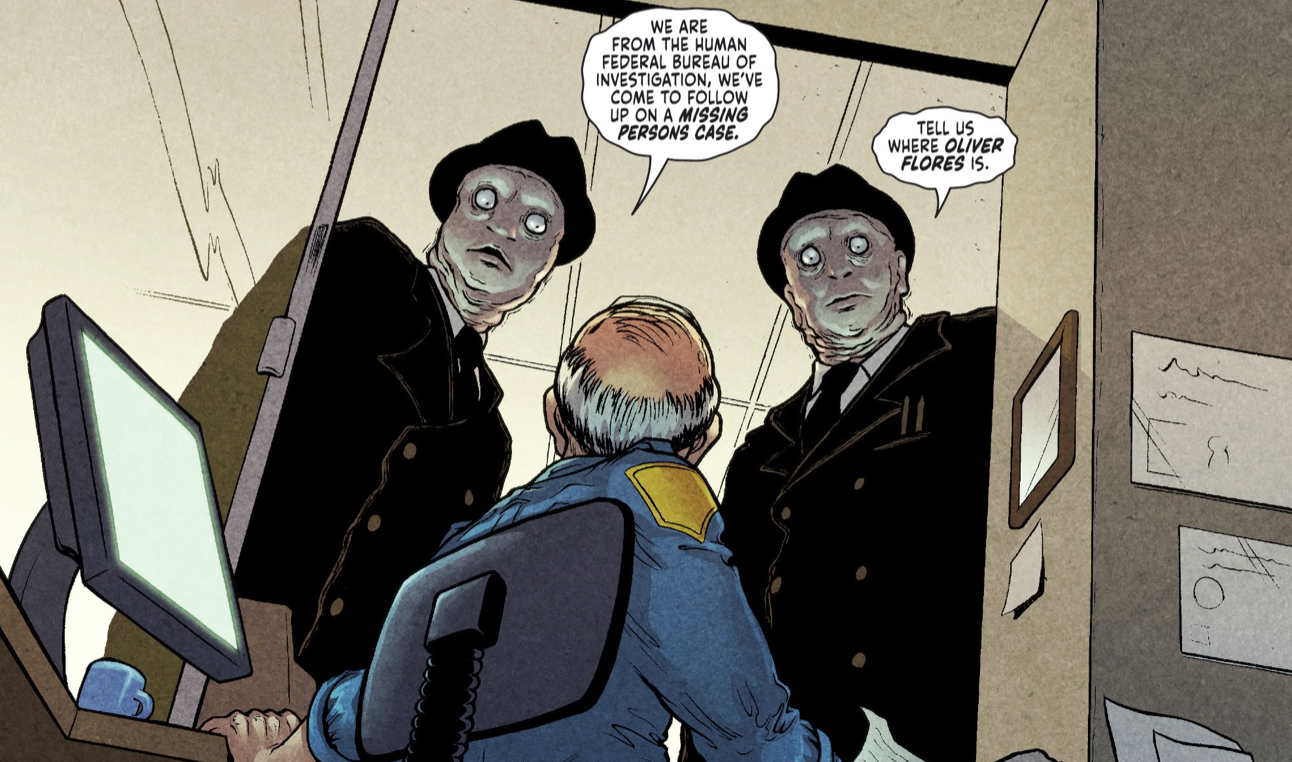 Like so many kids who grew up with parents who resented one another, Oliver Flores clung to the things in life that gave him a modicum of happiness, like television and sugary treats — anything to distract him with the emotional chaos at home.

Oliver’s small joys can’t make him ignore the fact that his parents can’t see eye to eye and aren’t above using him as a pawn in their game of chess with one another, but the boy gets by, in part because he’s got a friend in his stepfather who genuinely wants him to be happy and understand that none of what’s going on is his fault.

It’s on one of those nights when Oliver’s parents are going at it over the phone that the boy and his stepfather go out to grab some ice cream and get away from the madness for a little while, but as they’re making their way back home, something terrifying and mysterious happens before the pair vanish into thin air.

In the days, weeks, and months after Oliver’s disappearance, local searches are a launched, and Oliver’s case is put on the FBI’s radar, with the agency believing him to have been kidnapped by his stepfather, but the two are never seen again.

Until one day, Oliver, fully-grown but still very much thinking like a young boy, just…shows up nearby his childhood home, naked and disoriented. Oliver has an idea about where he’s been for all these years, but the truth is something no one around him is inclined to believe.

Artist Clara Meath and colorist Mark Englert take writer Eliot Rahal’s solid, but rather straightforward story and turn it into something otherworldly that smacks of classic of classic X-Files episodes with a touch of fairytale-like energy that speaks to Oliver being a boy-man out of time.

The first issue has its moments of surprisingly bold gross-out horror, but by the end, you’ll want to know exactly what happened to Oliver and how he’s managed to make his way back home. (Eliot Rahal, Clara Meath, Mark Englert, Taylor Esposito, Aftershock Comics) 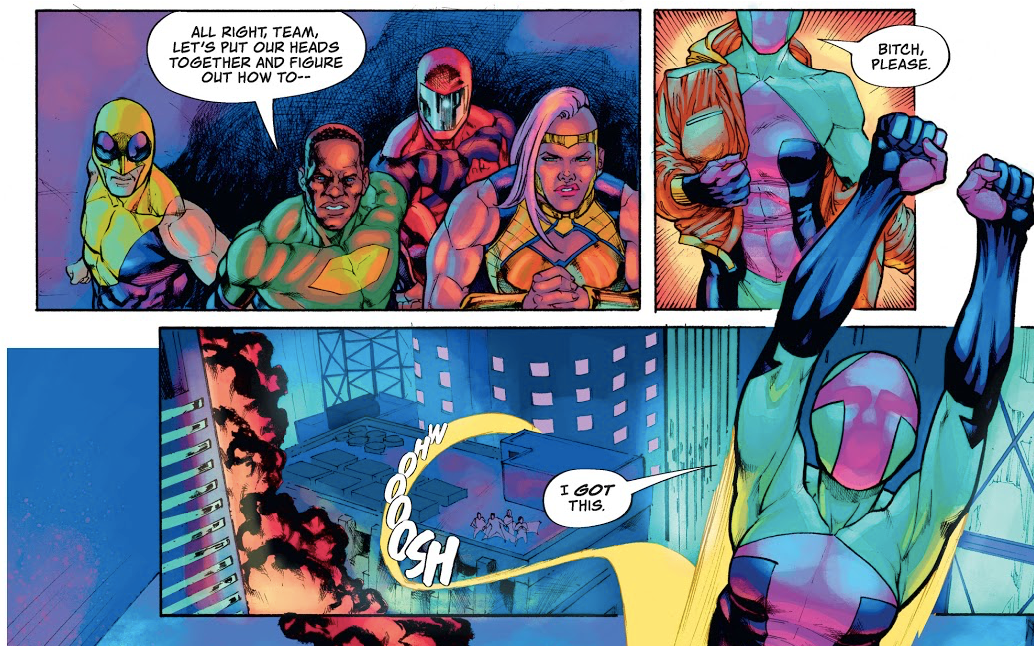 The superhero Orbit breaking away from her team to show off a little bit. (Image: Phillip Sevy, Frank Cvetkovic, Dark Horse Comics)

It’s difficult to talk about Dark Horse’s Triage without spoiling the excellent twist that writer/artist Phillip Sevy’s built into a story about three heroes who’ve never met one another suddenly being brought together as part of a larger cosmic destiny that’s put their lives in danger. Suffice to say that the first issue revolves around an interesting spin on the concept of being a “chosen one” when a hero knows that they are merely one among the chosen many.

Evelyn Pierce is a nurse who specialises in delivering babies, Orbit is a world-famous superhero who secretly loathes her adoring fans, and Commander Marco is a battle-hardened warrior who wanders the deserts fighting off never-ending waves of marauders and criminals.

Each of them holds a different set of skills, experiences, and worldviews that make them important within their respective realms, but being brought together shatters each of their assumptions that they were ever really all that unique within the grander scheme of things. (Phillip Sevy, Frank Cvetkovic, Dark Horse Comics) 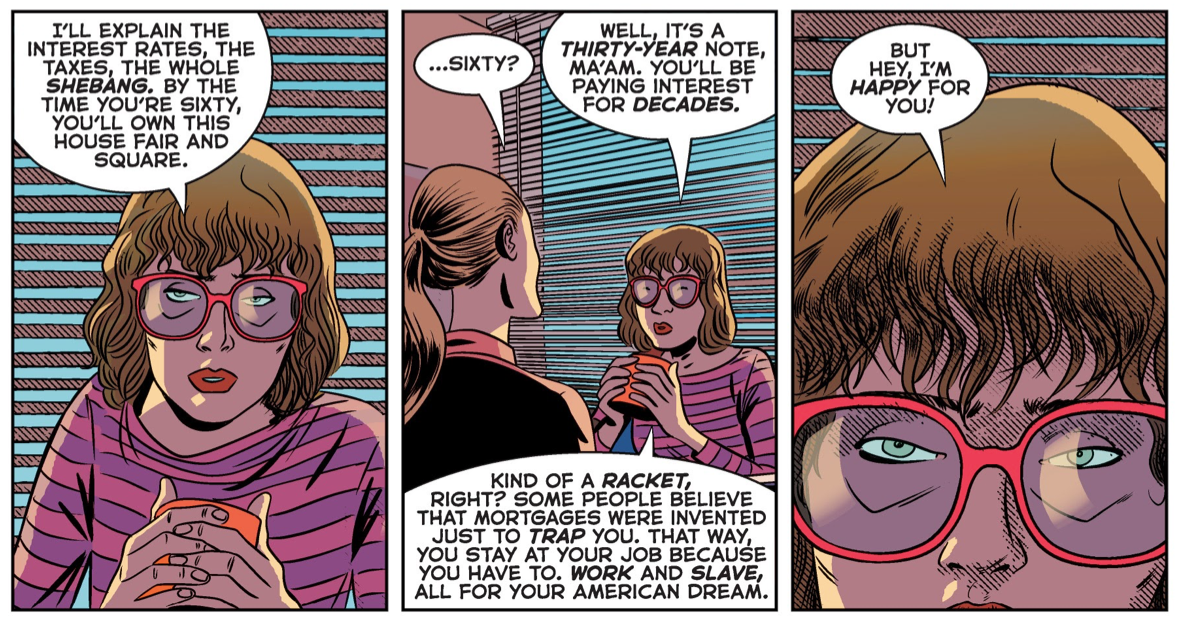 There’s a very distinct and unsettling feeling that descends upon a town when a new megastore opens up for business and immediately makes it clear that it intends to become everyone’s one-stop show for, well, everything. There were clearly dark things lurking in Holland, Michigan long before the Everything store opened its doors to much fanfare and elation from eager consumers, but the store’s only begun to make things weirdly worse as Dark Horse’ Everything opens.

Everyone who meets Everything’s store manager Shirley can sense that there’s something off about the woman, but no one can quite put their finger on exactly what it is. It’s not just the terrifying perma-smile artist I.N.J. Culbard and colourist Steven Wands illustrate her with in close-up shots, or the overenthusiastic way she evangelises everything about Everything, but rather the way she seems very much like a product of the store itself: perfectly pleasant, packaged, and presented to sell you things.

But the malevolent energy Everything’s brought to Holland extends beyond Shirley and even the store itself. All throughout the city, inexplicable, horrific things begin to happen with alarming frequency and it’s clear that — beyond big, big savings — what Everything’s brought to town is something darker and more on-brand for a megastore than many people typically think of: It carries a kind of mystical consumerism that’s threatening to devour Holland and the souls of its residents right up. (Christopher Cantwell, I.N.J. Culbard, Steven Wands, Dark Horse) 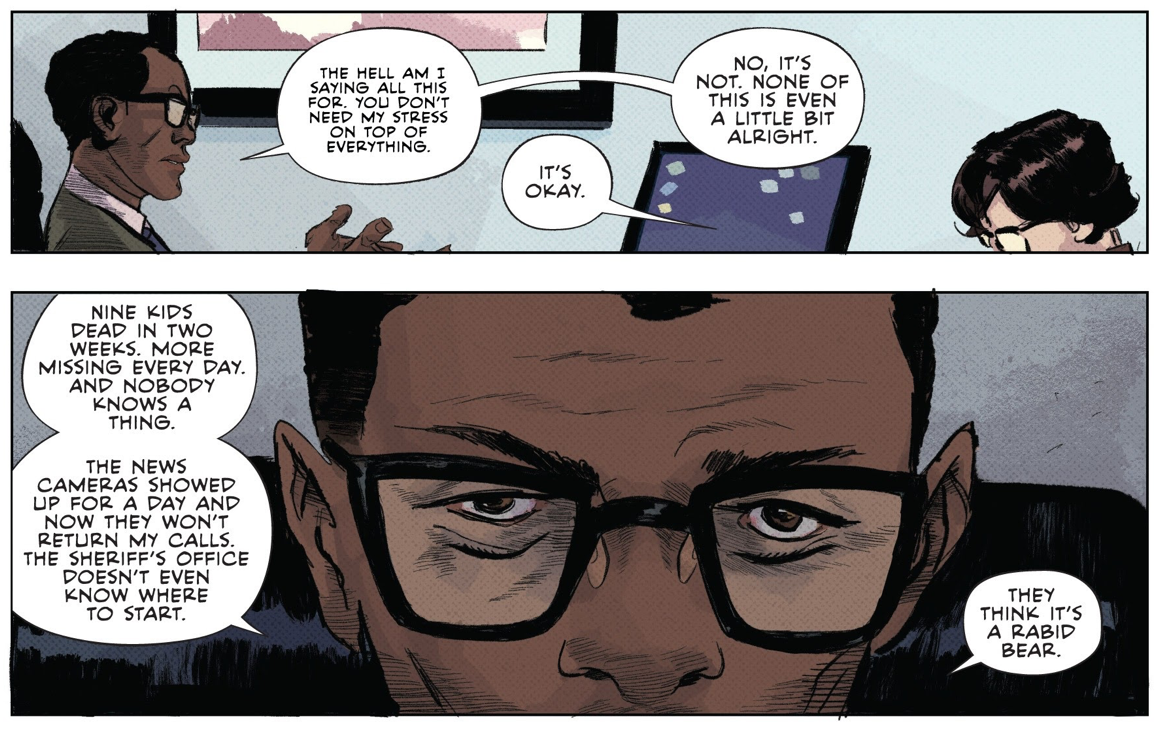 James explaining to his principal why he told a bully to fuck off. (Image: Werther Dell’edera, Miquel Muerto, Boom Studios)

Something Is Killing the Children

When kids go missing, the communities they’re from panic, and when kids turn up dead, the panic in those communities transforms into raw fear, anger, and frustration. In Boom Studios’ Something Is Killing the Children, swaths of kids are just disappearing or being murdered, with some being brutally maimed by whatever’s lurking in their local woods.

James is one of the few children who’s witnessed the… beast prowling his town that’s apparently taken to hunting children and eviscerating them in ways that no human or animal should be capable of doing. While most people might assume that James escaping with his life makes him lucky, his survival puts him squarely on the radar of other kids and adults around him who frankly don’t know what to make of what’s happening to their town.

James doesn’t seem like the kind of person who’d lure his friends out into the woods, mutilate them, and then fling their entrails around like a monster, but James being able to return back to school when so many of his friends have died raises suspicions that he can’t escape.

It doesn’t help that James insists that the scary monster story he told his friends before they ended up being attacked seemingly ended up coming true right before the kids’ eyes, but James is in luck. There’s one person who’s just walked into town that not only believes his story, but is going to need his help if they’re going to figure out how to stop whatever’s killing the children. (James Tynion IV, Werther Dell’edera, Miquel Muerto, Boom Studios)