This week, one of the best Star Wars games ever made, Jedi Knight II: Jedi Outcast, made a surprise arrival on modern consoles. It’s peculiar, because it’s a rare official recognition of a Star Wars timeline that no longer canonically exists. But it’s a peculiarity that can only be matched by Jedi Outcast’s hero himself: Kyle Katarn.

Kyle existed before Jedi Outcast, of course. Created as the protagonist for the 1995 PC shooter Dark Forces — which saw Lucasarts following in the footsteps of titans in the genre like Wolfenstein and Doom — Kyle was, initially, entirely what you would expect of an original Star Wars character made in the mid ‘90s: What if Han Solo but more badass (see also Kyle’s fellow video game hero, Dash Rendar, protagonist of Shadows of the Empire and basically a lesser Han and a lesser Kyle for good measure)?

A defector from the Empire turned mercenary for hire, Kyle’s initial backstory, before being hired by the Rebellion to steal the plans for the Death Star (well, part of them — it, like a lot of things in the Expanded Universe, is a long, convoluted story) is one of, well, dark forces. He operates in the seedy shadows of the galaxy far, far away, taking jobs from anyone as long as the pay is good. He’s a rebel with no cause and a whole galaxy of people to shoot up. 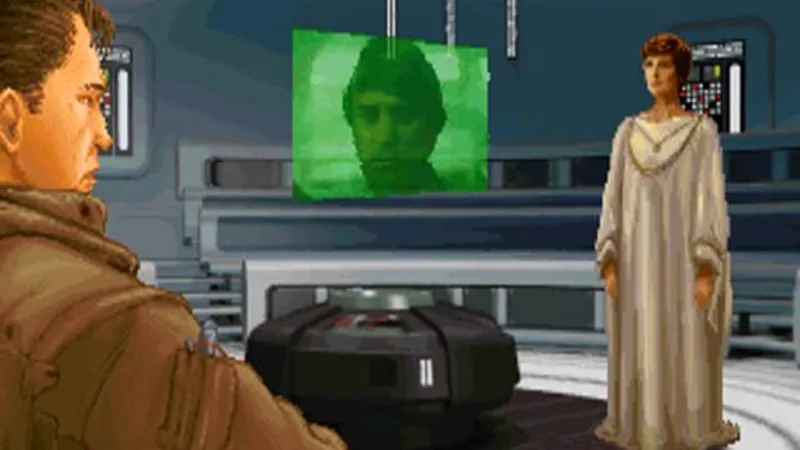 Although it would eventually become canonical to the Expanded Universe that the Light Side ending of Dark Forces II is Kyle’s true path, players had a choice in deciding Kyle’s morality in the game. Not only in how they selected Kyle’s abilities from different Light and Dark Side paths as his burgeoning exploration of the Force developed across the game, but also ultimately what kind of Force user Kyle could be in the climactic moments: Does he put aside his desire for revenge and only strike Jerec down as an act of defence, or does he murder the Dark Jedi in an act of cold blood?

It is in the wake of this choice that Jedi Outcast (with Raven Software taking over the reins from Lucasarts directly) opens, and the true intrigue of Kyle Katarn’s journey as a character really begins to shine. 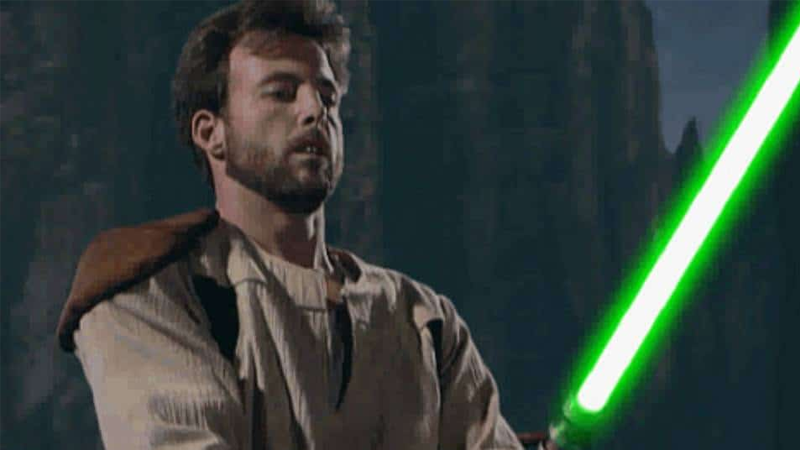 Luke Skywalker’s New Jedi Order, and his connection to the Force altogether.

At the time, gamers bemoaned these opening levels — they robbed them of the incredibly well-received lightsaber combat of Dark Forces II, forcing the audience and Kyle back into the run and gun first-person shooter action the original provided (the other thing Jedi Outcast is known for, of course, is having lightsaber combat that was even better than Dark Forces II’s highly regarded mechanics — it, and the followup Jedi Academy, are still considered the apex of the iconic weapon’s portrayal in video games).

Although perhaps unintentional, it felt like a way to mirror Kyle’s frustration with himself: Why couldn’t Kyle just use his powers again, fling his lightsaber around slicing limbs off with badass abandon, like they had empowered him to in Jedi Knight? Because Kyle himself didn’t feel he deserved to anymore. 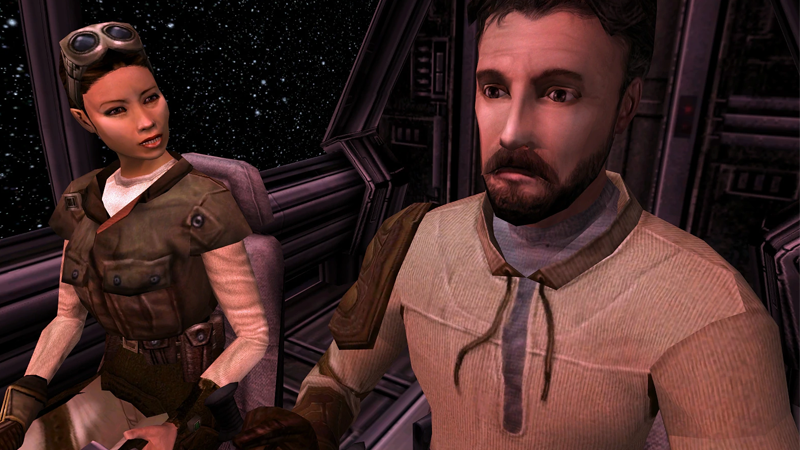 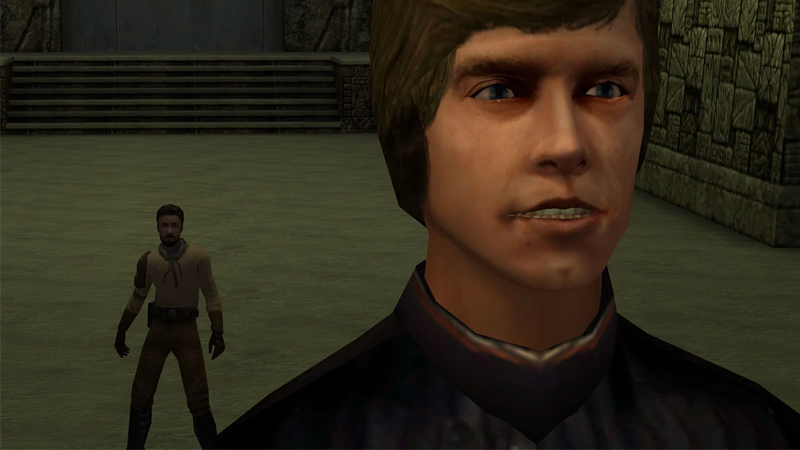 It is this fascinating dichotomy that makes Kyle such an intriguing character and adds a textural nuance to the otherwise cut-and-dry morality typically found in Star Wars’ endless battle between the Jedi and Sith. Kyle wasn’t perfect.

He was, as you’d expect of someone cracked from the mould of Han Solo, fast and loose and rough around the edges. But it didn’t stop him from being a hero and a Jedi, and he didn’t have to become a pure and wise, wholly embracing pariah of the Light Side. It made him, when Jedi could easily be slightly boring goody-two-shoes, feel refreshingly grounded and human, even in a saga of blaster bolts, space magic, and light up glowswords.

It’s something that the current iteration of Star Wars has slowly started to dabble in — just look at Luke’s arc in The Last Jedi and that film’s primary thesis about the Jedi on an institutional level.

But Kyle took that kind of heady thought experiment down from a macro level to a character-driven one, and did so across a character arc that was completely compelling to follow along with, beyond the primal pleasure of hacking and slashing your way through the best lightsaber combat in gaming (seriously, god, it’s so good).

Maybe we can’t get Kyle Katarn as we knew him in the new canon. There are shades of the things that helped define his growth and journey, echoes of that once expanded universe already in there, but even if we did, he wouldn’t be quite the same, a square attempting to be fit into the circle. The square’s great, the circle’s also great, it’s just that the two don’t quite match up. 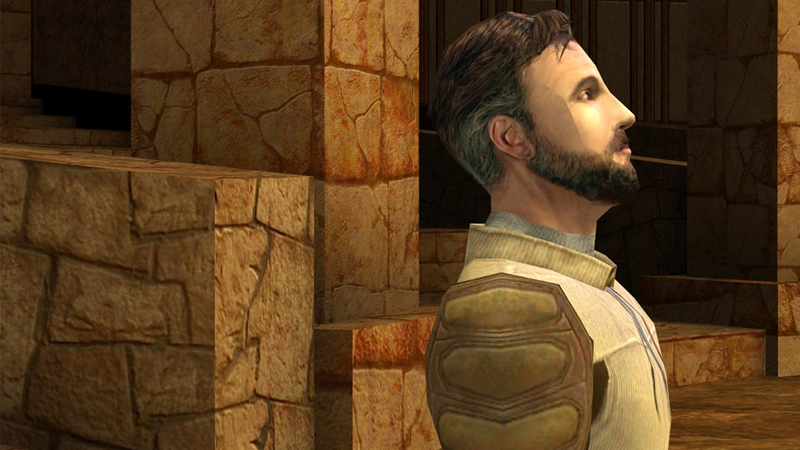 He wasn’t perfect. But he was a Jedi nonetheless. (Image: Raven Software)

But as the Jedi themselves evolve on a path quite unlike anything we’ve seen in the Star Wars saga on screen in the run-up to The Rise of Skywalker and beyond, maybe Kyle’s greatest legacy could be more Force users like him, a little rough edge to the prim-and-proper mysticism of the galaxy’s wise knights.