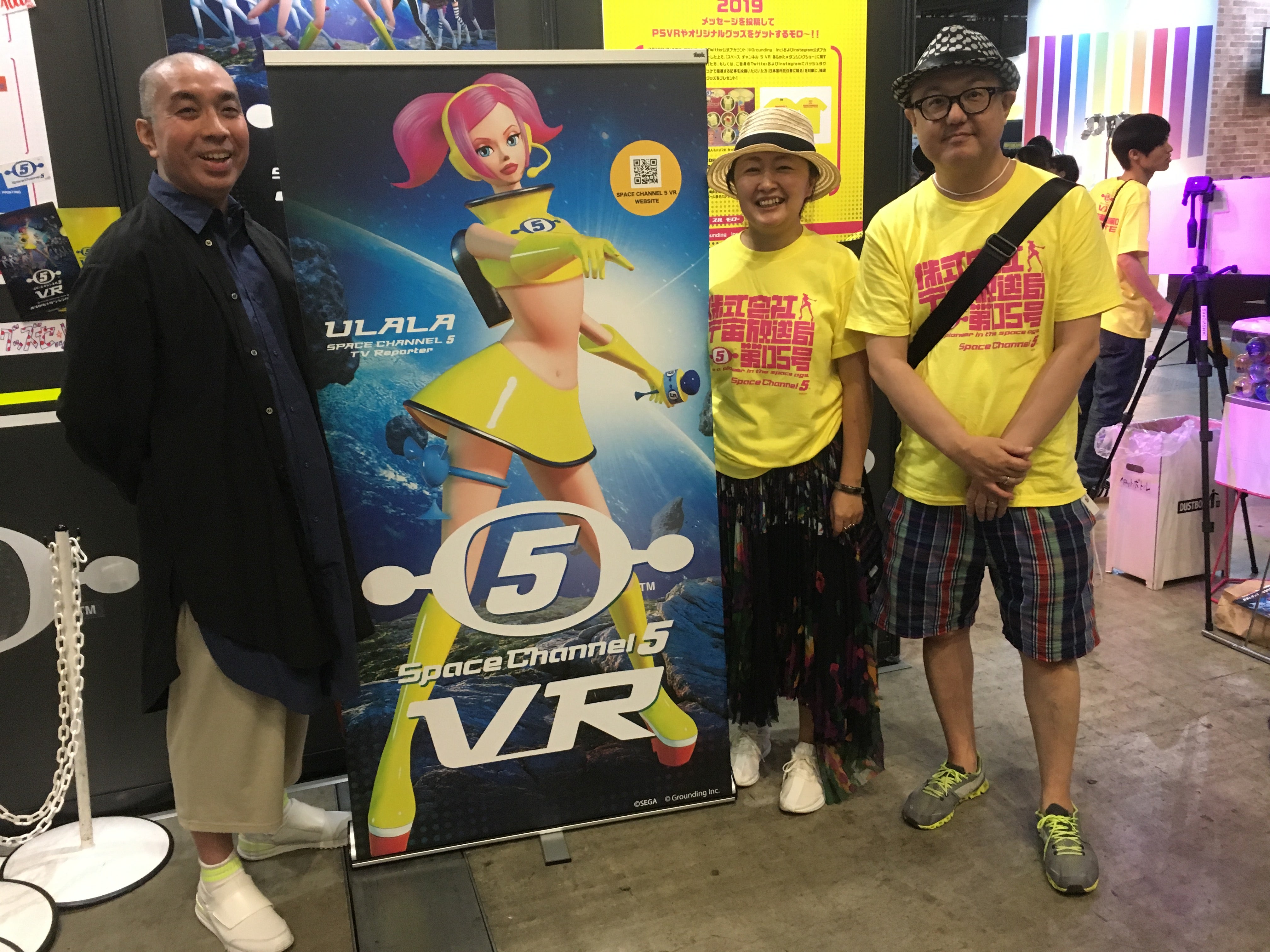 Takumi Yoshinaga of Sega, Mineko Okamura, and Noboru Hotta, both of Grounding Inc (Photo: Brian Ashcraft, Kotaku)
To sign up for our daily newsletter covering the latest news, features and reviews, head HERE. For a running feed of all our stories, follow us on Twitter HERE. Or you can bookmark the Kotaku Australia homepage to visit whenever you need a news fix.

It was in 1999 that the first Space Channel 5 debuted at the Tokyo Game Show. Now twenty years later, the classic music game is back.

Following the success of the original Space Channel 5, Sega released a GBA version and a sequel called Space Channel 5 Part 2. While the main character Ulala had cameos in an array of other games, there was never a proper third Space Channel 5 game until now.

“Back when the original games came out, we thought that a third Space Channel 5 would have had the same type of gameplay,” Sega’s Takumi Yoshinaga told me at the Tokyo Game Show. There would not have been enough for a difference to merit another sequel.

“When the Wii came out, I did put together a pitch for a new Space Channel 5 game,” said Yoshinaga. “I also did the same for Kinect.” The projects were never given the green light. While those games might have been fun the first or second time, the thinking was that there wasn’t enough staying power to merit the release.

“But because of VR, we thought we could do Space Channel 5 with a new type of gameplay,” said Yoshinaga. Not only would the motion play add a new aspect to Space Channel 5, but immersing oneself in the world was part of the appeal.

“The team members of the original Space Channel 5 have stayed in touch via social media like Facebook,” explained Mineko Okamura, who worked on the original games and who nows heads up Grounding Inc., the studio that is developing Space Channel 5 VR: Arakata Dancing Show for PlayStation VR. “We would able to bring them back together to work on the VR game.”

Since everyone knew each other and had that shared history of making the original games, development progressed smoothly.

“For this game, we wanted to change the colour of Ulala’s outfit,” said art director Noburo Hotta. In the first game, she wore an Dreamcast orange dress, which at that time symbolized something new and exciting for Sega. For Space Channel 5 VR: Arakata Dancing Show, neon yellow was picked as the best way to express the world of VR.

“I think this is a good time to bring Space Channel 5 back,” Okamura said. “Ulala is a reporter looking for the truth, and now it’s increasingly hard to tell what news is real or fake. But she’s searching for that truth and doing it in an upbeat and happy way.”

That sounds exactly like what the world needs right now.

Look At These Space Channel 5 Figures

Good Smile Company are going back to the Dreamcast days for a couple of upcoming figmas, with two figures based on Space Channel 5's Ulala.