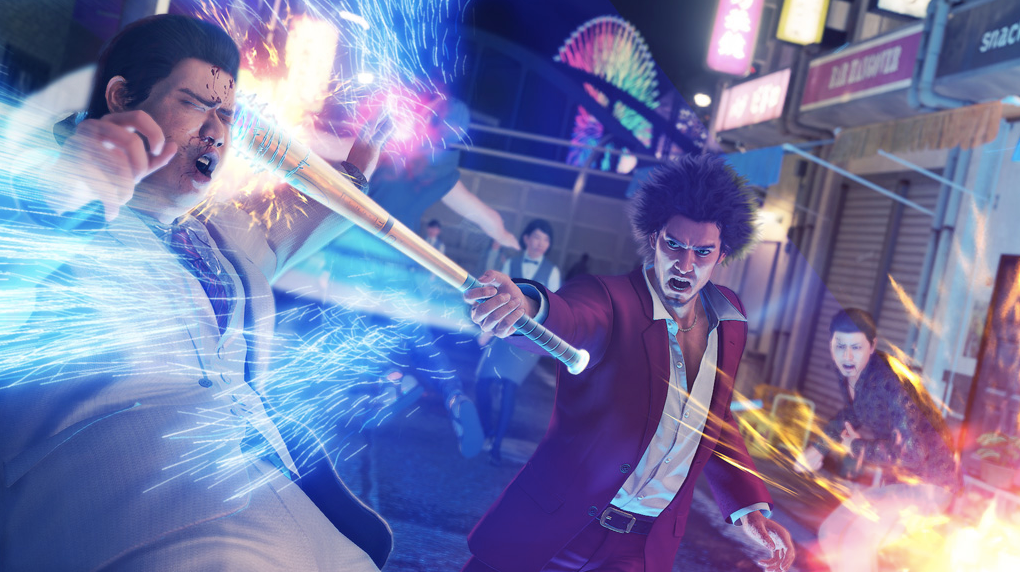 Since 2005, Sega has been churning out Yakuza games. They’ve pretty much all followed the same formula: beat-’em-up action, mini-games, some silliness, and riveting drama. Yakuza 7 is different, trading button mashing for role-playing-game style commands.

Gameplay-wise, this is a significant departure for the series. It stars new series protagonist Ichiban Kasuga. This is not his first appearance as he previously starred in the free-to-play Yakuza Online. A collectible card game, Yakuza Online was also a departure from the gameplay of the mainline series. So, it makes sense that Sega wanted to shake things up with Ichiban Kasuga.

The demo opens with Kouichi Adachi, a former detective, drinking a cup of sake on the street. He crushes the cup in his hand and enters the apartment where Ichiban and a drifter named Nanba are sleeping. Adachi has an ax to grind and teams up with Ichiban. The mission in the demo has players leave the flophouse where they are staying and go to Hello Work, a job-hunting company. 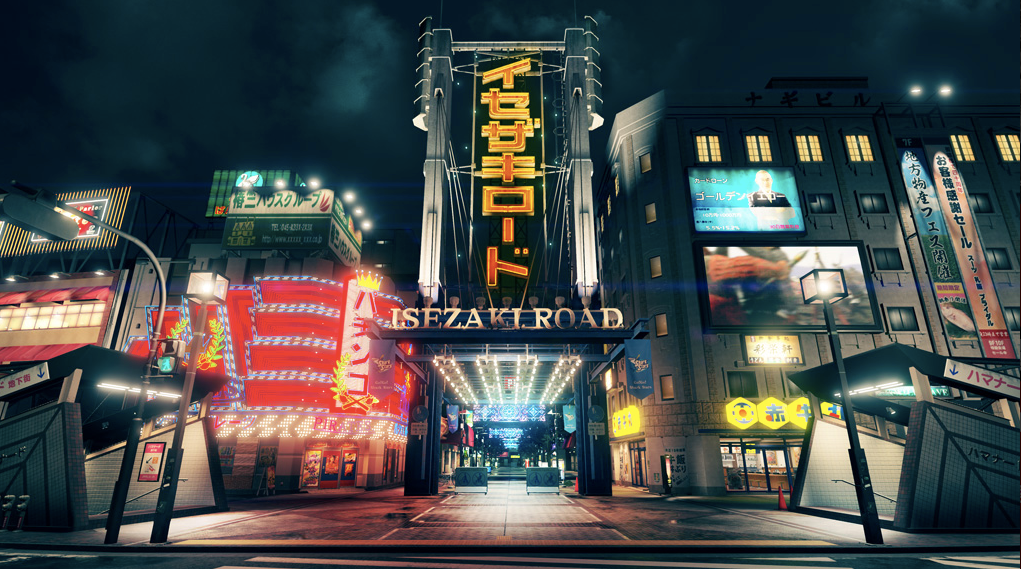 Hitting the streets of Yokohama’s Isezaki, it looks like past Yakuza games with urban Japan obsessively recreated. But, you know you’re in for something different when the loading icons are retro-style pixel versions of Yakuza 7‘s heroes.

After setting out, the group comes across a golden baseball bat stick in the ground. Thinking they can sell it, both Adachi and Nanba try to pull the bat out of the ground but fail. Ichiban gives it a go, successfully pulling out the bat and raising it over his head. A ray of light shines down from the heavens. It’s like the sword and the stone—something that isn’t lost on the characters and something that they mention.

A new look at Yakuza 7's battle system in action at TGS 2019 showing off its basics. pic.twitter.com/4MHReROPQQ

Adachi tells Ichiban that he’s the “hero.” Ichiban, who’s a huge Dragon Quest fan, knows exactly what this means in the context of JRPGs and makes comparisons to the popular role-playing games. Like in Dragon Quest, Yakuza 7 has a “Hero” (勇者 or yuusha in Japanese). The characters are class-based; so, for example, while Ichiban is the Hero, Adachi is the Fighter. Characters wield weapons, such as a nightstick or an umbrella, and if they are near objects, such as a bicycle, they automatically use them to kick arse.

The fantasy setting has been swapped for the real-world. But there still is a good deal of fantasy in Yakuza 7. The on-screen icons and prompts, as well as the healing animations, are straight out of your typical JRPG.

Walking the streets, led to encounters with enemies, triggering the turn-based combat. When combat begins, the appearance of the enemy characters changes.

For example, the first group’s appearance changed from casual clothing to street fashion influenced by Fist of the North Star. Another group of older men in tracksuits changed into bandana-wearing thugs. The contrast between fantasy and contemporary Japan makes the experience feel novel and fresh. 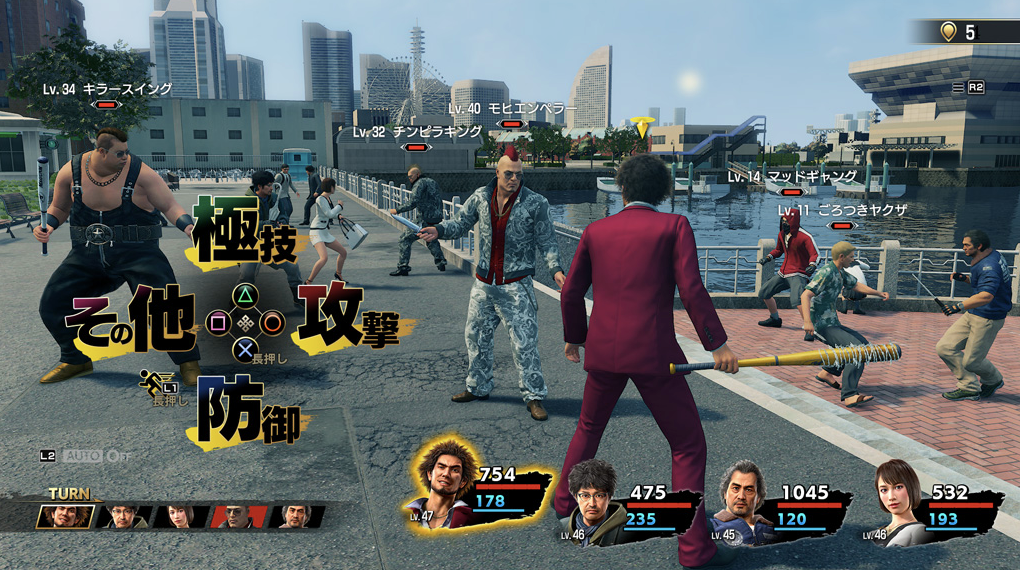 This tongue-in-cheek earnestness immediately won me over. Prior to playing the demo, I was bemoaning the loss of action-based combat. “It’s not a Yakuza game unless there is Yakuza action,” I said. After playing the demo, any reservations I had about Sega ditching the punching for turn-based combat in this specific game was gone.

In the demo, I had only three encounters before I arrived at Hello Work. There are mini-games, such as pachinko and go-cart riding, but I didn’t experience that element. (I imagine the mini-games are similar to previous entries.) The constant button-pressing required for traditional Yakuza games can feel exhausting.

Yakuza 7 feels more leisurely paced, with turned-based command-action battles that allow players to enjoy the story and soak up the underground world of organised crime. This is probably why Sega is calling Yakuza 7 a “dramatic RPG.” 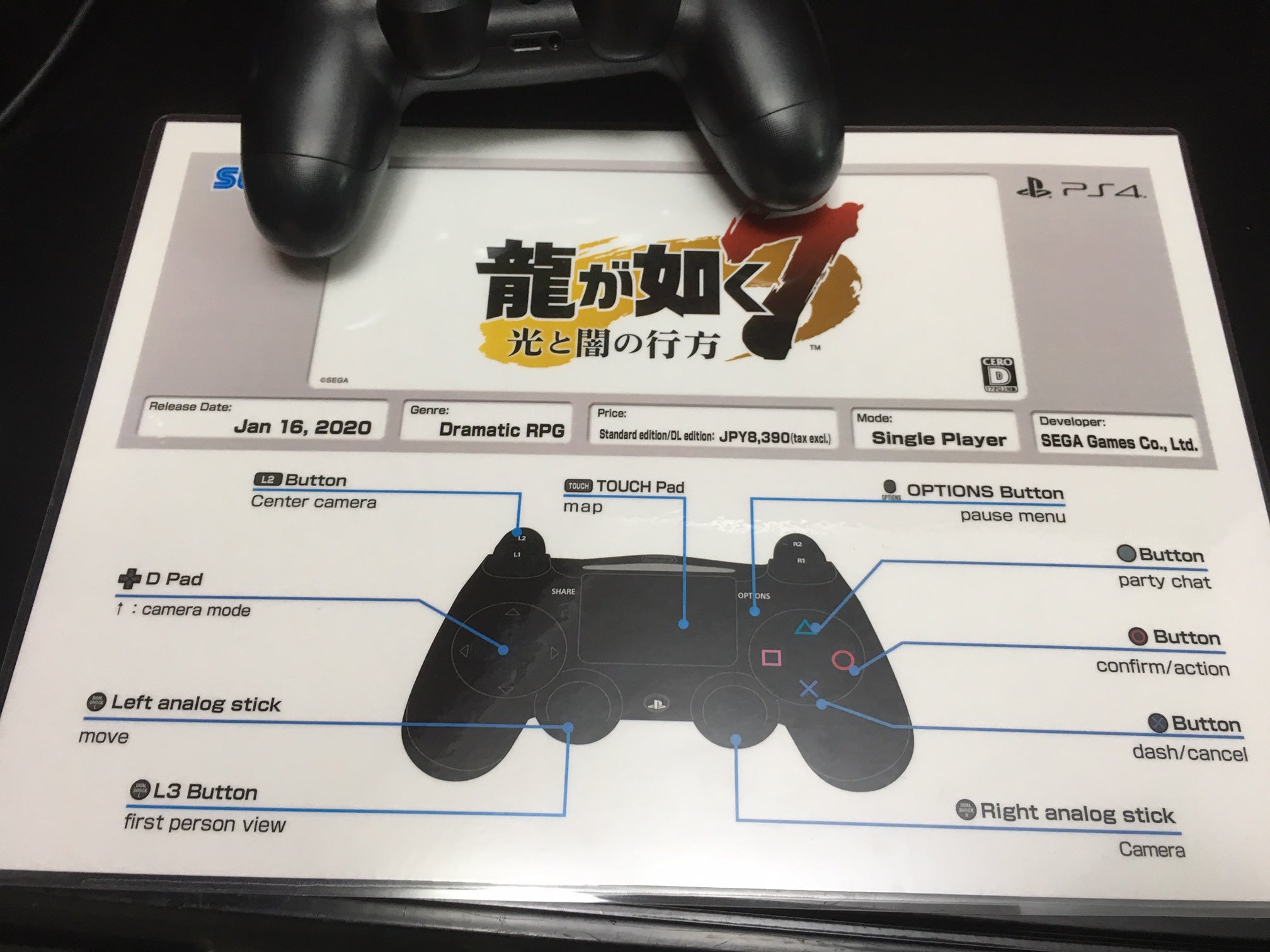 Part of the charm, though, is that Yakuza 7 shakes up the traditional formula. It’s familiar yet odd and different. This is something long overdue, but I’m not sure all the Yakuza games need to be cheeky JRPGs. The charm would wear off. The change is a much-needed fresh take for Yakuza 7, but long-term, I’m not convinced it’s not a way forward. For this game at least, it is.

Yakuza 7 will be released in Japan on January 16, 2020 on the PlayStation 4. An international release date has not yet been announced.