A Foolproof Guide To Escaping A Corn Maze 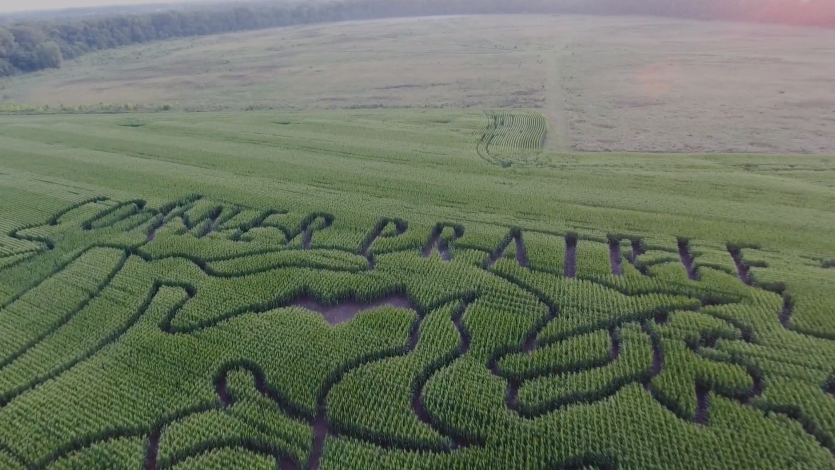 I love solving a good maze on paper, but it turns out real-life mazes can be trickier to solve. The biggest change is that you are down inside the maze and lose that coveted bird’s eye view. Outside of carrying a bag of breadcrumbs to mark your path, how do you escape?

Well there’s a simple method that you may have intuited yourself—simply hug the wall and keep going to escape. Except in today’s computer-plotted corn mazes, that might not always work. Having designed many video games, I’d like to share some corn maze caveats.

I’ve lived in Indiana for more than half my life. I was born here, went to college here, and then worked in the video game industry on both coasts. But now I’m back in Indiana, this time with my own family, and my own company. There’s not a lot of developers here, but there is a lot of corn.

With the fall of leaves, and a coolness in the air, there also comes the ripening of corn fields. By the end of October, corn is golden yellow, and ready to be harvested. But not before there’s a chance to get lost running around in it.

Many large farms advertise corn mazes. We went recently to one in the middle of Indiana at a historic site called Conner Prairie. At first the prospect of exploring a corn maze sounded exciting. I happen to love solving mazes.

My newest game, Pig Eat Ball, which was just released to Switch, PS4, and XB1, explores all manner of maze concepts. Check if out of you ever wondered what would happen to Pac-Man if he actually got fatter while eating pellets. 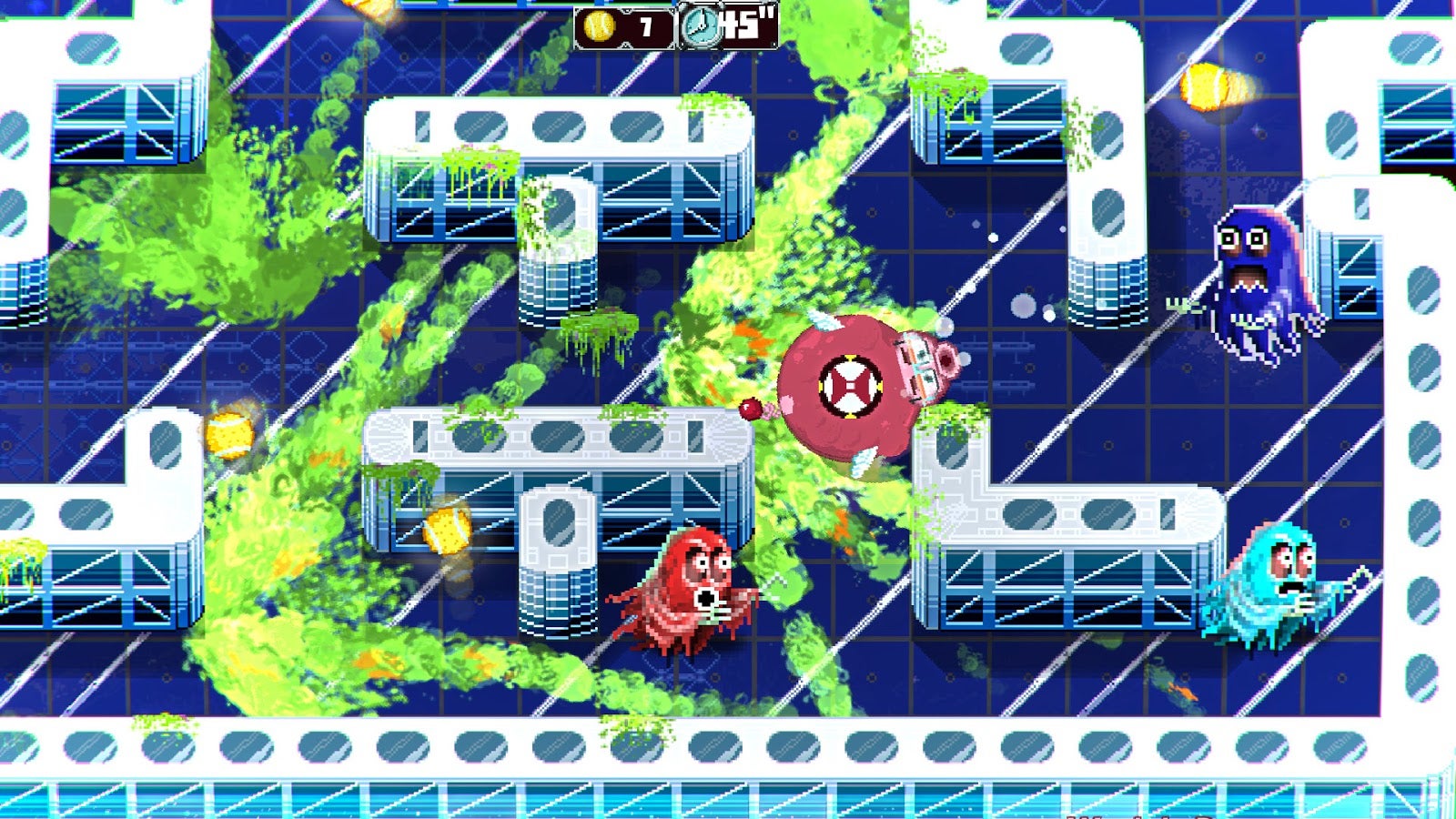 With my interest in puzzles and design, I was eager to explore in a real maze. I hadn’t been through a corn maze in many years. But as I crested the hill to overlook the massive, 12 acre field, a tiny worry crept into my mind.

“Can we actually get lost?,” I said to myself “ Surely not. A whole family can’t get lost.” But there’s something quite different about looking at a maze in a video game, solving it from above, and actually being stuck physically inside the maze.

In fact, in 2011, a family in Massachusetts actually became so lost and scared they phoned 911 from within the corn maze. They were saved, apparently found 7.62m from a nearby street.

We were given a map of the maze, which was reassuring but again, following a paper map is a bit trickier than following dynamically updating directions in your car.

As we made our way through the maze, full of dead ends, and twists and turns, a new thought dawned on me: We’re safe. If we simply follow the wall. If we always take a right turn, and never change, we’ll get out easily.

And we did escape! Looking back, it was certainly fun, and we had a good time. And for the record I wasn’t honestly that scared, but when you’re in charge of small children, tiny worries can become large.

The realisation I had is the “wall follower rule” for solving a maze. The idea is, as long as you always follow the wall and make turns in the same direction, you will exit the maze. When you are given a chance to turn, always turn right (always turning left works as well). 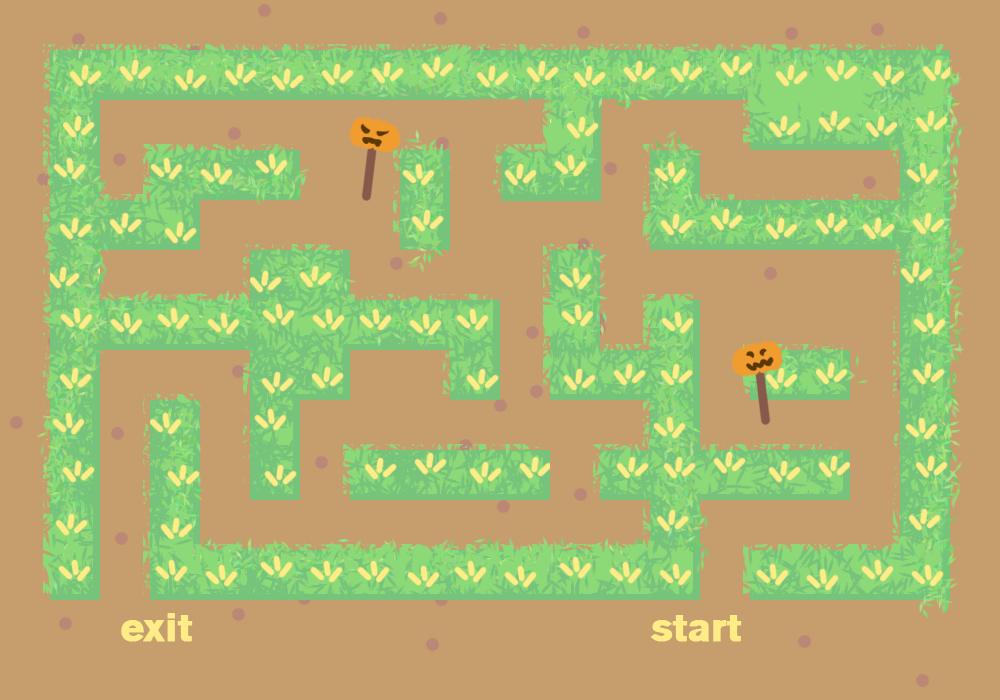 See the maze above? Imagine holding your right hand against the wall. If you happen to find a dead end, turn 180 degrees. Now with your right hand on the other side, exit the dead end, and eventually turn to the right and down a new path.

A corn maze is a “simply connected” maze. Because of the nature of corn mazes, that they start and exit on the outside of the maze, the wall follower rule will always get you out, no matter what. 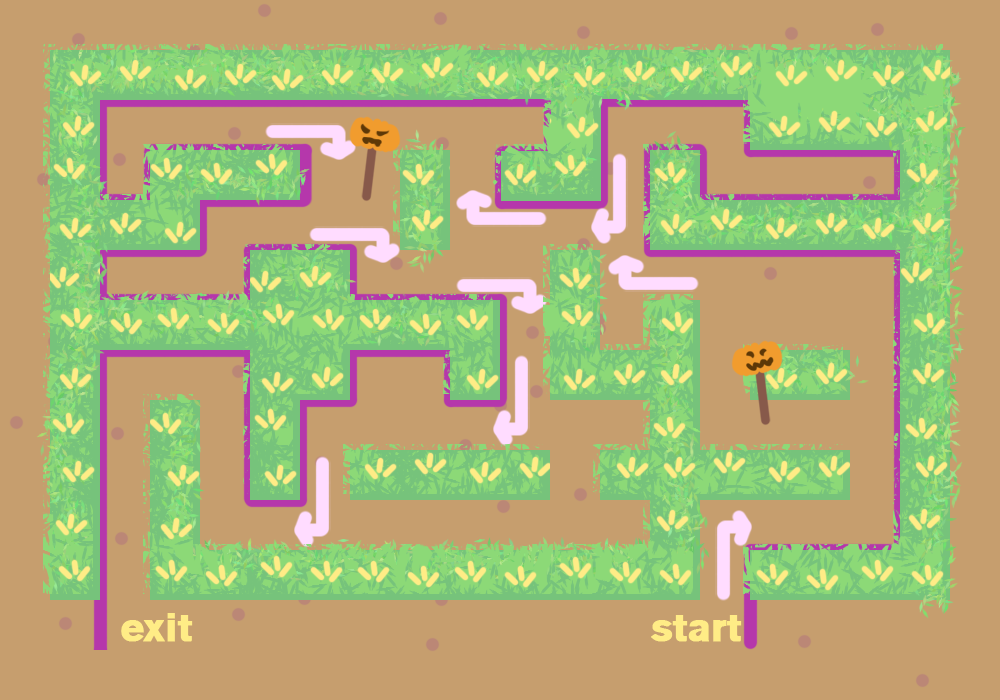 The main issue with the wall follower rule is if you are disconnected from the wall, and end up on an island, you will travel in a loop. 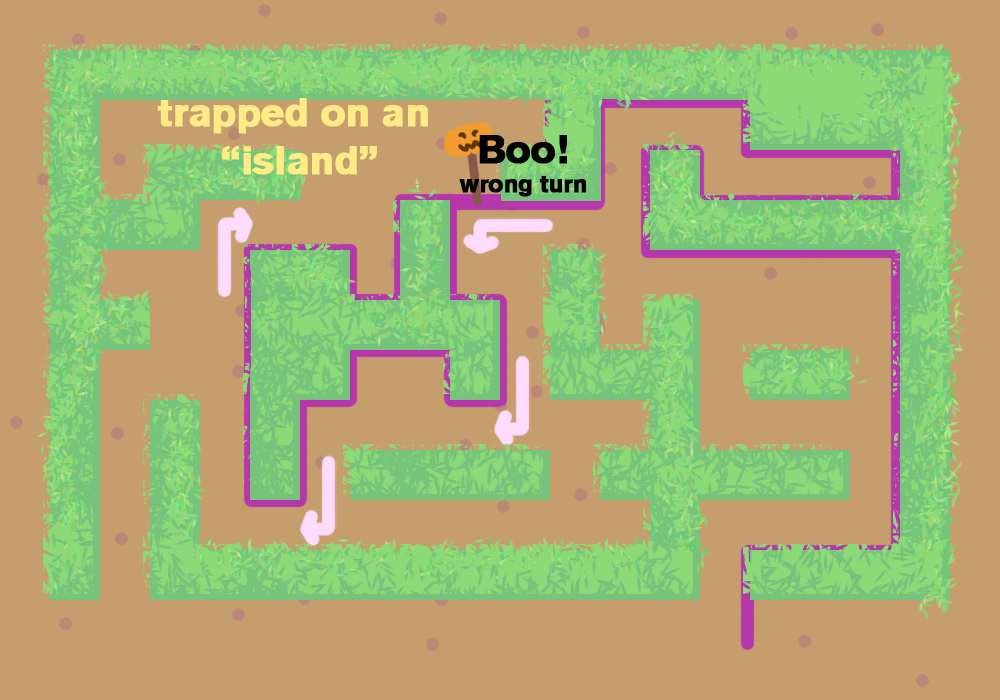 Modern corn mazes certainly can have these islands, but the wall follower rule still works if you can stick to the same wall that connects the start to the exit. The maze you try, however, might be a “haunted maze.” Those often have “scare actors” who chase you around. When that happens, you might accidentally leave the wall you’re following. You are now in danger of becoming disconnected from the exit strategy and set adrift.

If the maze features any sort of moving obstacle such as a closing door, or a turnstile, you may be forced away from the wall.

If there are bridges or passovers within the maze, the wall follower method may still work, or may not. It depends on if the bridge deposits you into a maze island that is separated from the outer wall. 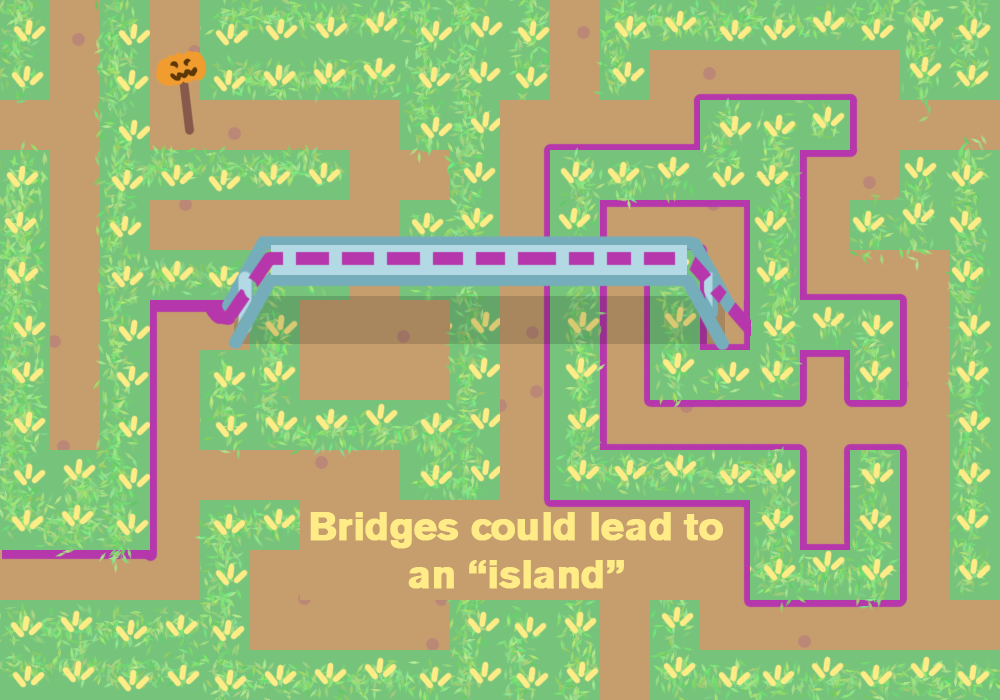 The extreme version of the bridge problem would be if you walked along a bridge and started the maze from the inside. Then the wall follower rule may not work, as you may start on a disconnected island inside the maze. 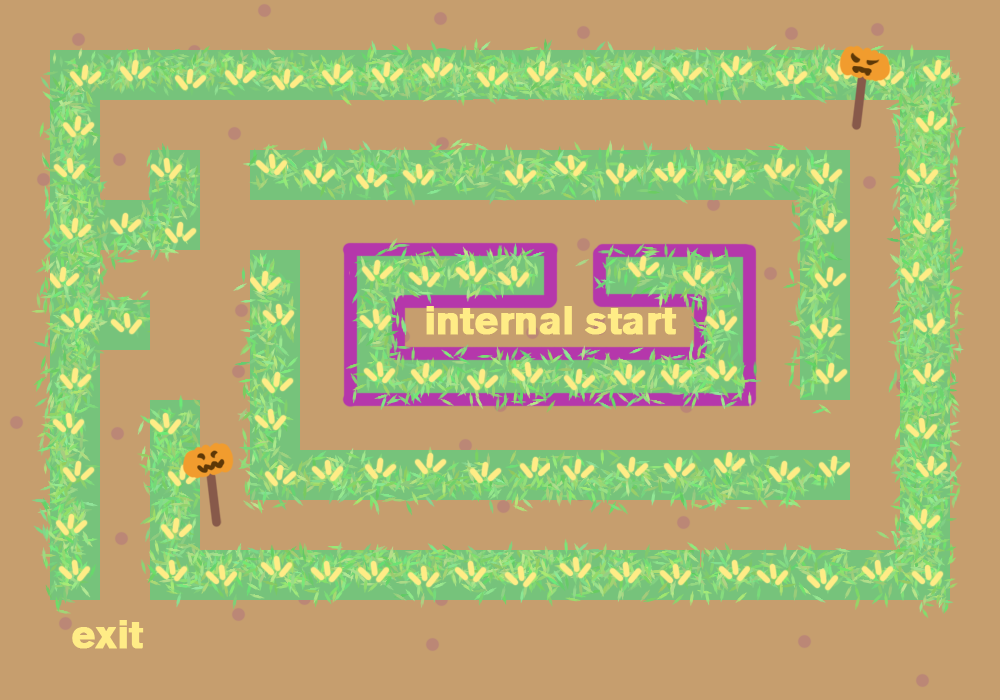 If there are certain targets that require you to visit and mark your ticket, to get a prize after you leave, then these targets may lead you off the wall and into confusing trouble.

Basically, if anything takes you to an island in the maze of disconnected sections, away from the precious outside wall, this method won’t work. The maze has to start/end on the outside of the maze for this method to work.

Something to remember, if you’re really stuck: it is of course, just rows of corn. If you are lost, you could simply walk all the way through the corn and escape by following a row of corn, to the edge of the field!

As long as you keep an out for the above tricks that will lure you or force you away from the wall, you should be just fine in a corn maze.

Time for an obligatory plug: I love traditional mazes on paper and in games but when I decided to make a new game filled with them, I wanted to see how crazy things could get. And thus, for the past six years, my team and I have created 200+ single-player levels for Pig Eat Ball. Ostensibly, the game works like Pac-Man, having you “eat all the balls to solve the level”, but things quickly get tricky. As you eat balls, you get fatter. At some point you get so fat, you can get stuck in the maze. What to do? You barf. Barfing sends balls careening through the maze, but at least you can now squeeze through that tight spot. Each level ends when you finally get all the balls in your mouth. 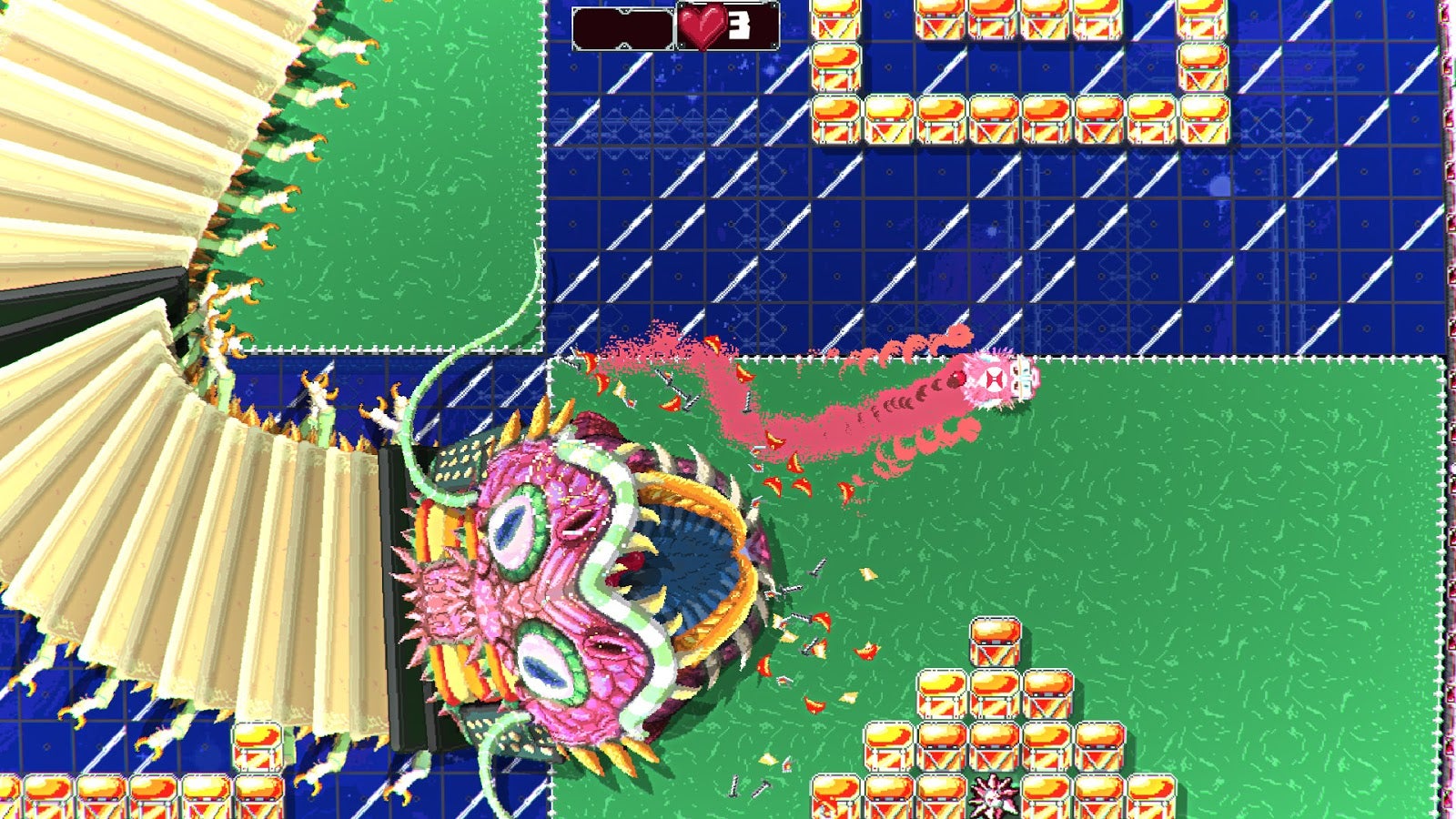 The game starts simply, but we carefully build on each mechanic, working to exemplify the methods of my favourite designer, Shigeru Miyamoto. You learn about getting stuck, but then there are mazes you can break, walls you can hop over, walls you can eat, conveyor belts, spikey balls, spicy balls, exploding balls, and of course, the mischievous Pillbugs. Always up to trouble, the Pillbugs will steal your balls and laugh in your face. 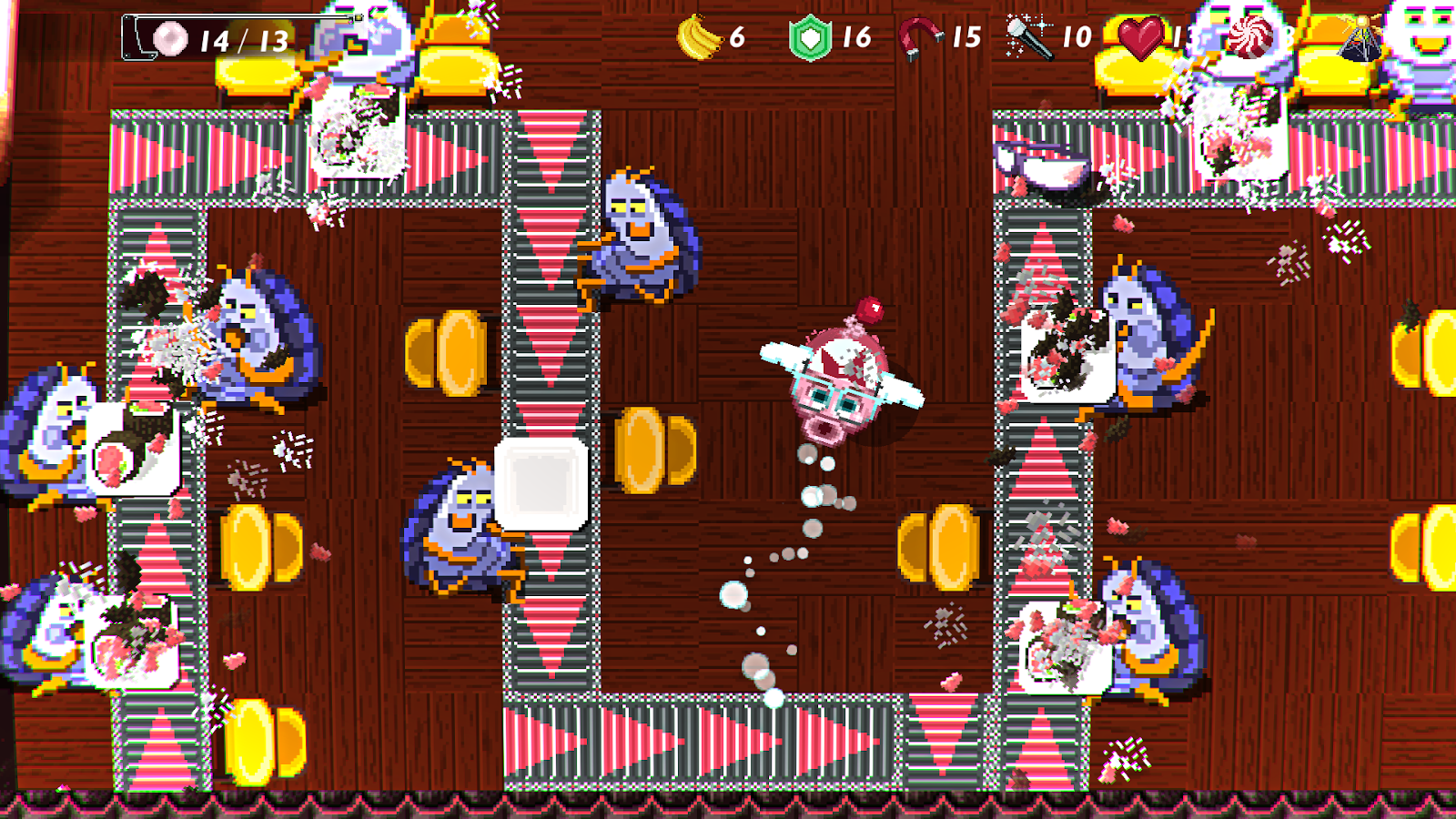 There’s also a four-player, local party mode designed for casual players and hard-core types to both enjoy together. There are 24 levels and different options galore.

So if you’d like to suck your friend’s balls or barf in their mouth, Pig Eat Ball is ready for you now on Switch, PS4, Xbox One, and Steam! 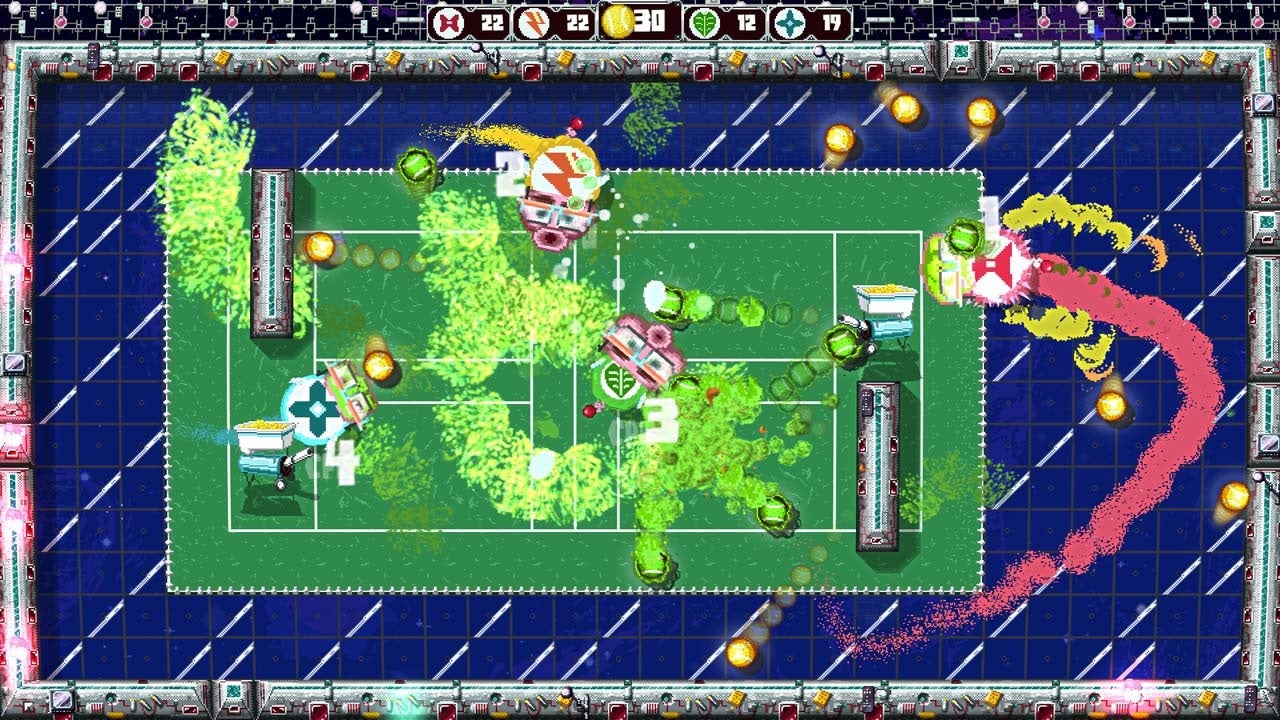 When he’s not baking pies, Nathan is busy hand-making freaky action games for ageing gamers like himself. Come wax nostalgic with him @MommysBestGames.