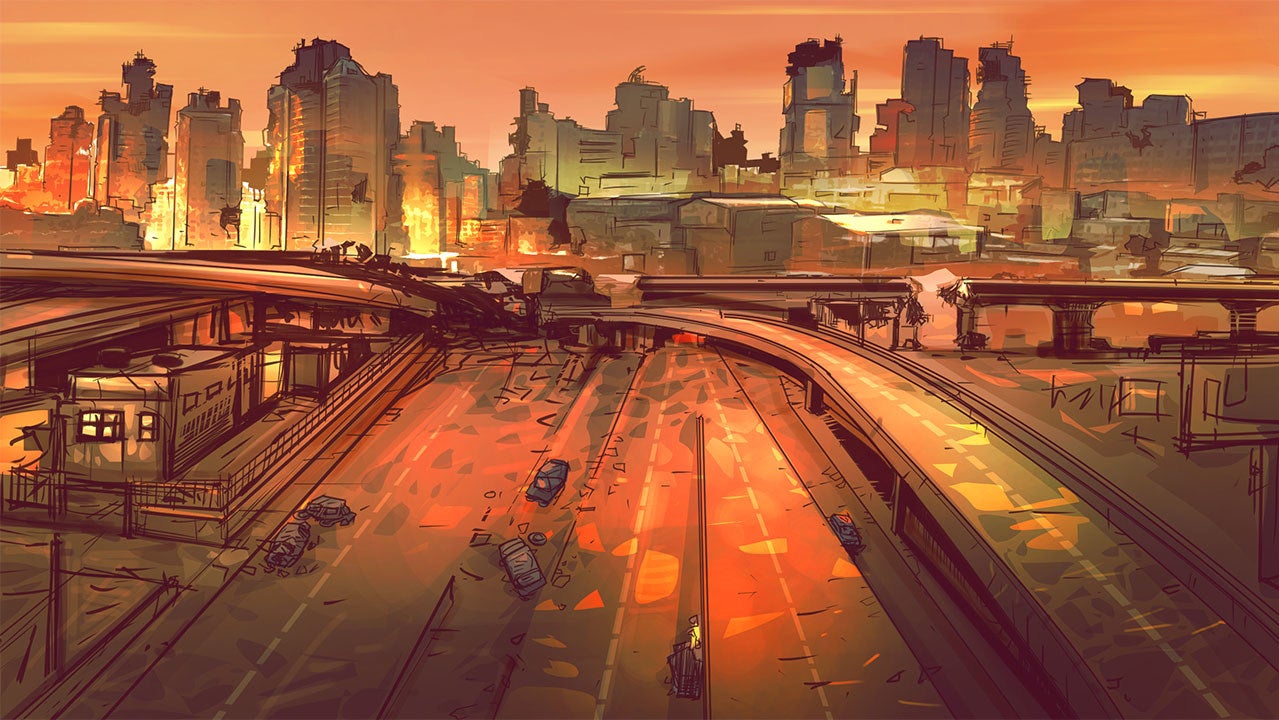 This is what the apocalypse will look like. (Image: Courtesy of William Volk)
To sign up for our daily newsletter covering the latest news, features and reviews, head HERE. For a running feed of all our stories, follow us on Twitter HERE. Or you can bookmark the Kotaku Australia homepage to visit whenever you need a news fix.

If we fail to stop climate change, the world will be screwed. Like thousands will die, hundreds of millions will be screwed. The actions society takes over the next decade will largely dictate what our climate will look like by the end of the century.

In an effort to get the world to act, game developer William Volk developed a video game to show them how bad life can get if it doesn’t. The Climate Trail, released earlier this month, is a video game inspired by classic video game Oregon Trail that challenges players to travel more than 1,000 miles north from Atlanta to Canada.

The game takes place in an apocalyptic future where everything is so screwed that a Climate Trail is the only way to safety.

“I’m trying to fight the fight by basically putting people in a situation that could happen,” Volk told Earther. “It’s not impossible.”

The journey involves walking on the Climate Trail, the route refugees have taken to escape the deadly heat that’s taking a hold of the American South.

Along the way, players must figure out how to deal with hunger, thirst, heatwaves, and massive tornado-spewing thunderstorms. Whenever players reach the next city on their journey ” including Flint, Michigan ” they find crumbling buildings, potentially dirty water, and usually empty stores. In the cities and elsewhere, every decision you make carries a consequence, some better than others.

The game doesn’t play like Oregon Trail, but instead is more like a graphic novel you play through. Each “scene” is drawn and players alternate between drawn scenes and a map as they navigate the altered world of the late 21st century. It’s easy to interpret the game as a survival game ” like The Last of Us, which also inspired some parts of the game ” but Volk said it’s really an educational one, which he hopes to get into schools.

Before starting on the trek to Canada, players are shown scientific information on global warming, sea level rise, greenhouse gas emissions, and feedback loops. The characters that you’re responsible for keeping alive on your journey north are the ones supplying this crucial information.

There’s Katherine, the climate scientist. Then, there’s Bonnie, who lost her parents to the “Permafrost Plague,” a result of our melting Arctic ice releasing ancient diseases back into society. There’s also Albert, who fought during the “Resource Wars” over oil, food, and land.

“The wars didn’t last long,” Albert says during the game’s intro. “Once the oil ran out and the plagues spread, there wasn’t much point to it all.” 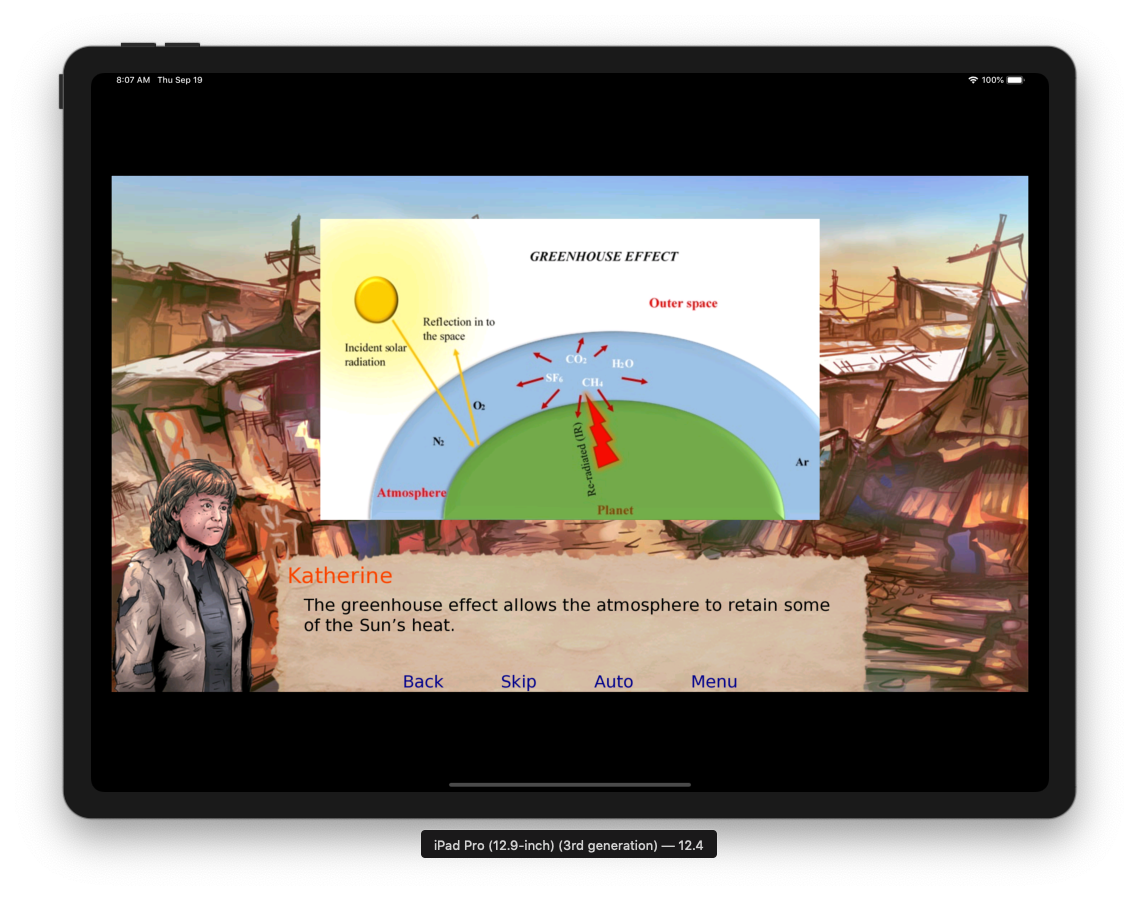 “The catch-22 about this game is I started it with a much more optimistic attitude than when I finished it,” Volk said. “The more I dug into it, the more it seemed things were actually worse than imagined.”

Scientists typically talk about limiting warming to 2 degrees Celsius ” ideally, 1.5 degrees Celsius ” but current models do offer some awful scenarios depicting a world where our emissions carry on or even increase. The RCP8.5 scenario ” one of the worst potential outcomes climate models show ” is closest to what Volk has created in the game, Kate Marvel, a climate scientist with Columbia University’s Earth Institute and the NASA Goddard Institute for Space Studies, told Gizmodo. And unfortunately, the scenarios the characters are thrown into are largely in line with science.

The characters in the Climate Trail, for example, are fleeing Atlanta because of extreme heat. The game starts with the wet-bulb temperature (which includes temperature and humidity) nearing 35 degrees Celsius, about the maximum threshold the human body can withstand. Even with temperatures below that, the heat and humidity can still be unbearable even in our current world.

“It doesn’t even have to get that bad before people whose livelihoods depend on them being outside, working outside, doing hard labour, becomes economically not viable anymore,” Marvel said.

The game also starts with a description of the Burn, a prolonged period where wildfires grew worse out West, resulting in a massive release of carbon dioxide that further warmed the atmosphere.

But Marvel said whether this feedback plays out is still something scientists are actively researching, largely because human forest management practices will play a role in how severe fires become through. As we’ve seen with the Amazon, though, many people also choose to light entire forests on fire, which is only exacerbating the problem. The game is sure to mention that, too.

Researchers still have a lot to learn about the impact climate change will have on storms as well. In the game, the players encounter a storm every few days at least. You have the option to wait it out or to travel during the storm. While the game shows an illustration of a tornado, Volk said these virtual storms could be anything from thunderstorms to tornadoes. In the game, they threaten your group with injuries and damage to your food supply, but every day you wait it out, water and food resources decrease.

In the real world, scientists are still unsure how exactly tornadoes will forming more often in parts of the U.S., and it could be tied to climate change. 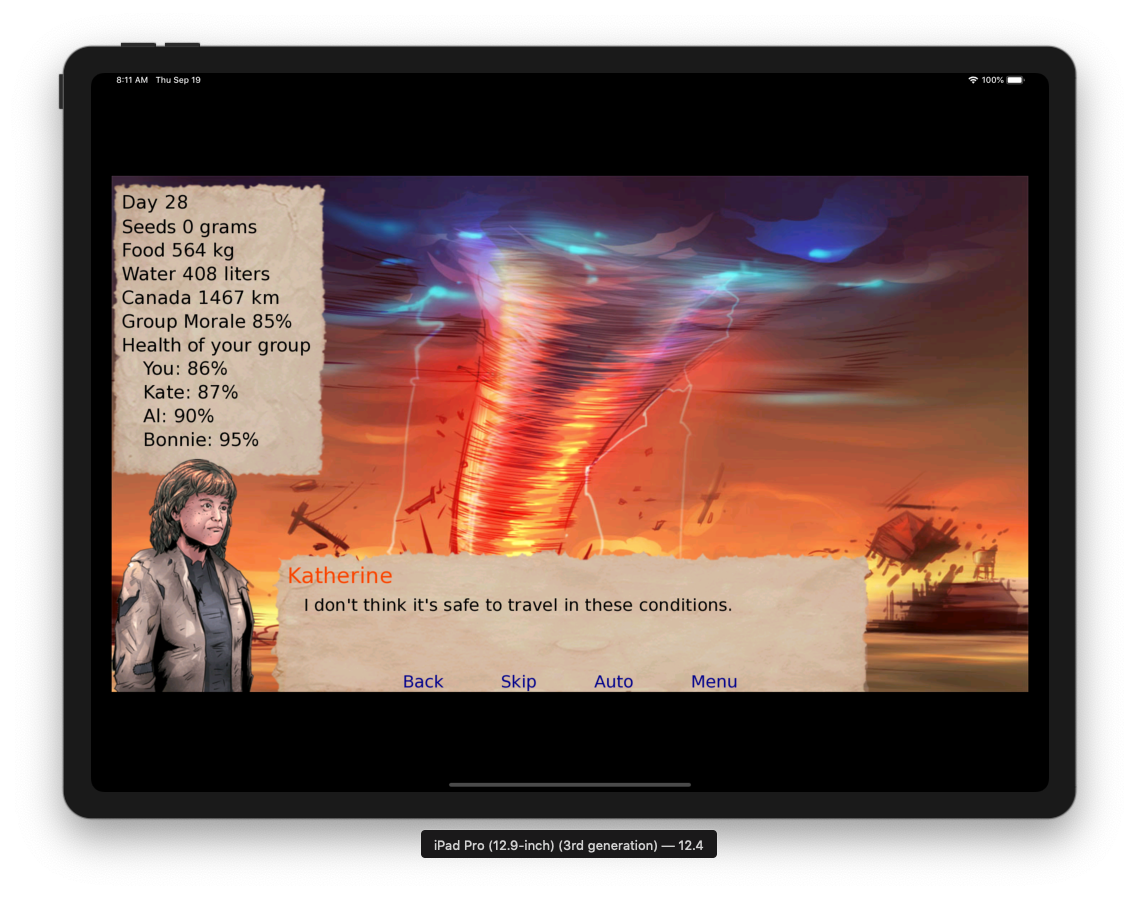 Winning the game isn’t exactly easy. You have to be sure you buy enough sorghum to eat and enough water to drink in the beginning. During the trip, moments of rain will allow you to increase your water supply, but you have to depend on luck to find food when scavenging major cities.

After three tries, I finally won on the hardest difficulty. My entire group and I definitely suffered, but we made it to Canada alive and without any major injuries or heatstroke. Unfortunately, arriving in Canada doesn’t exactly solve everything, but you’ll have to play and win the game to find out.

Climate Trail is available to download for free on Mac, Windows, and Linux, as well as in the Apple Store and Google Play for mobile.