There’s never a dull moment in the world of Fallout 76, the online multiplayer game of post-apocalyptic survival and adventuring. Last week, publisher Bethesda announced that the game’s much-requested addition of computer-controlled characters was delayed until next year. Today, the publisher said that it will be selling premium subscriptions that will provide players with access to private servers at a cost of about $20 a month or $150 a year.

Bethesda calls the new program Fallout 1st and pitches it in a new blog post as “a premium membership that offers something players have been asking for since before launch: private worlds for you and select friends.”

For the cost of that subscription, a player gets access to a private version of the world that they can share with up to seven other players, who don’t also have to be subscribers. Bethesda also indicates that those private worlds will at some point support mods. 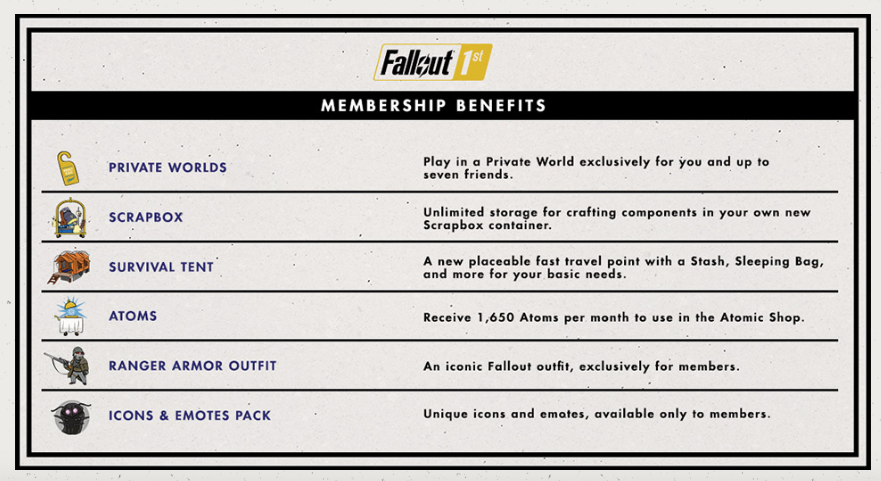 Bethesda)” loading=”lazy” > This is what a Fallout 1st membership would get you (Image: Bethesda)

In addition to the private server access, subscribers get exclusive items including a “survival tent” that players can use as a make-shift base and fast travel point, and some unique outfits and emotes. The subscription also doles out 1,650 Atoms a month. Atoms are the in-game currency used for microtransactions in the game and can be purchased in bulk from Bethesda for real money. Currently, Bethesda sells an 1,100 Atom bundle for $15, which makes the whole Fallout 1st program very close to simply getting people to commit to buying a lot of Atoms each month.

Since its release, the actual game quality of Fallout 76 has been improving thanks to some new quests and meat-themed events, and its players remain creatively inspired. But there are still myriad gameplay frustrations and the overall enterprise is still frequently dismissed as a misfire, the delivery of a not-quite-Fallout-MMO, not-quite-proper-Fallout-game. The news of Fallout 1st has, among other things, inspired a pretty harsh pun:

The addition of a subscription model is odd, especially as many games move toward other models, including Fortnite-style season/battle passes. For comparison, a monthly World of Warcraft subscription costs about $22. Regular Netflix costs $10.

Notably, Fallout 76 has not gone free-to-play here. The base game still costs $60, though appears to be on sale in most shops for around $30 at the moment.

Fallout 76 remains Bethesda’s biggest thing going, as its next large release, Doom Eternal, was recently delayed from November 2019 to March 2020.