detective city of angelsla noirereview
Image: Kotaku Australia
To sign up for our daily newsletter covering the latest news, features and reviews, head HERE. For a running feed of all our stories, follow us on Twitter HERE. Or you can bookmark the Kotaku Australia homepage to visit whenever you need a news fix.

It was raining a hell of a storm outside, windows rattlin’ so hard I thought my teeth were gonna’ shake out. I was halfway through a whisky, thoughts spinnin’, when my office door creaked open. It was her. The dame. The trouble. “Luke”, she said huskily, “I need your help”.

Oh. Sorry about that. I was feeling very noir for a minute there, but then, that’s what happens when you play Detective: City of Angels, one of the most thematically powerful board games I’ve ever had the pleasure of playing. You sit down and open the box as a 21st-century gamer, and before you know it you’re wearing a trenchcoat, flicking open a rusted old zippo and wondering how you were gonna explain this one down the station, the third stiff this week and damn it, I’m sorry. There I go again.

Detective is for 1-5 players, and can be played in a number of different ways, so this review is going to be spread a bit thin covering them all. The one thing they have in common, at least, is that they all involve at least one person playing as a detective, trudging around 1930s Los Angeles roughing up thugs, flipping joints, searching for clues and, most importantly, interviewing and interrogating suspects. 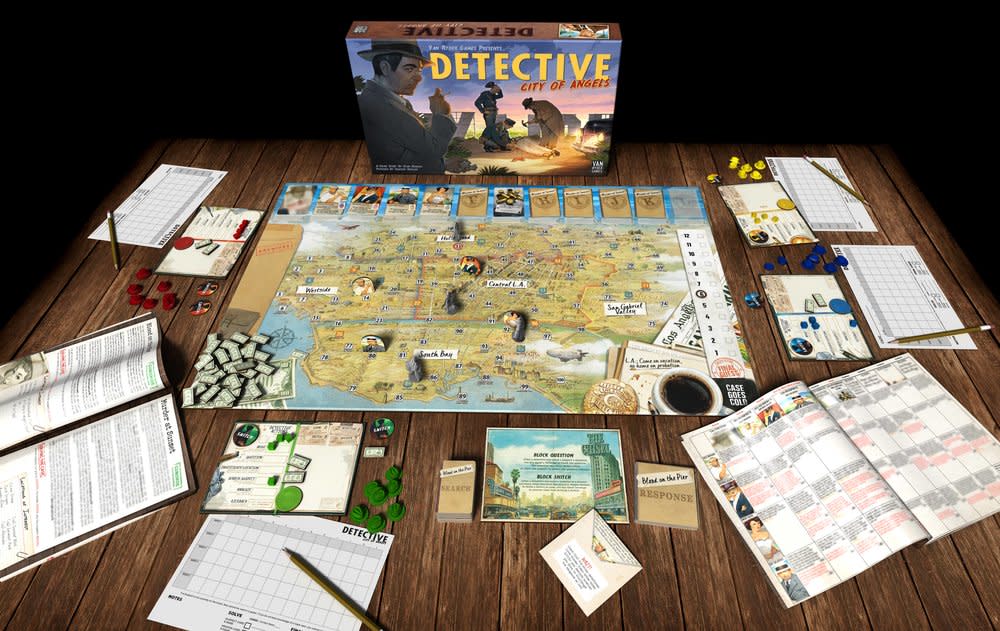 The heart of the game, no matter how you play it, is that there are crimes that need solving, and the only way to solve them is to piece together what happened (or what you think happened) by uncovering evidence and talking with people. Detective is built on a complex choose-your-own-adventure style database of questions and answers, where every case has a certain number of suspects and a certain number of pieces of evidence, ranging from murder weapons to notes to people of interest.

Every time it’s a detective’s turn, they can ask one of the suspects about one of the pieces of evidence. Sometimes they’ll get an immediate and honest response, but many times they won’t, and it’s up to the detectives to work out whether a suspect is lying, and if so, whether it’s worth pressing them a little, which can get you the info you need 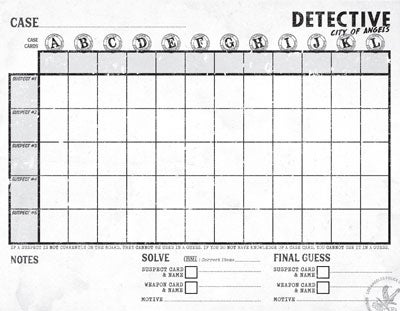 All of that is powered by an enormous volume of text that covers every possible question and every possible response. As detectives ask more questions and uncover more about the case, they scribble down everything on a big notepad (pictured), and as time draws to a close (each case has a limited number of turns), they’re supposed to think the case through, work out who’s guilty and then make an accusation.

All of which sounds pretty easy, but that’s most definitely not the (sorry) case. Even the easiest scenarios gave us trouble during this review, because you don’t solve cases mechanically in Detective, in that there’s a process you can complete after which the case is perfectly and automatically solved. You just have a bunch of people’s stories to go on and need to trust your gut.

It’s wonderful playing a game where your progress and enjoyment doesn’t come from its rules or systems, but for the platform it gives players to collaborate and solve complex puzzles. My best times weren’t on the board, they were over it as my fellow detectives and I leaned back in our chairs, the deadline for a case fast approaching, hammering out theories as to who killed the suspect and where, using which weapon, like we were up to our eyeballs in the worlds most saxophone-heavy game of Cluedo.

Detective has a few ways you can play, depending on how many people are involved and what type of game you want to try out. The main approach sees a number of players take control of one detective each, while another assumes the role of the “Chisel”, which isn’t a character so much as the city itself. The Chisel is like a 1930s Dungeon Master, responsible for selecting the answers to the detective’s questions (basically a choice between whether to read out the truth or a lie), and also just looking after general administrative work. 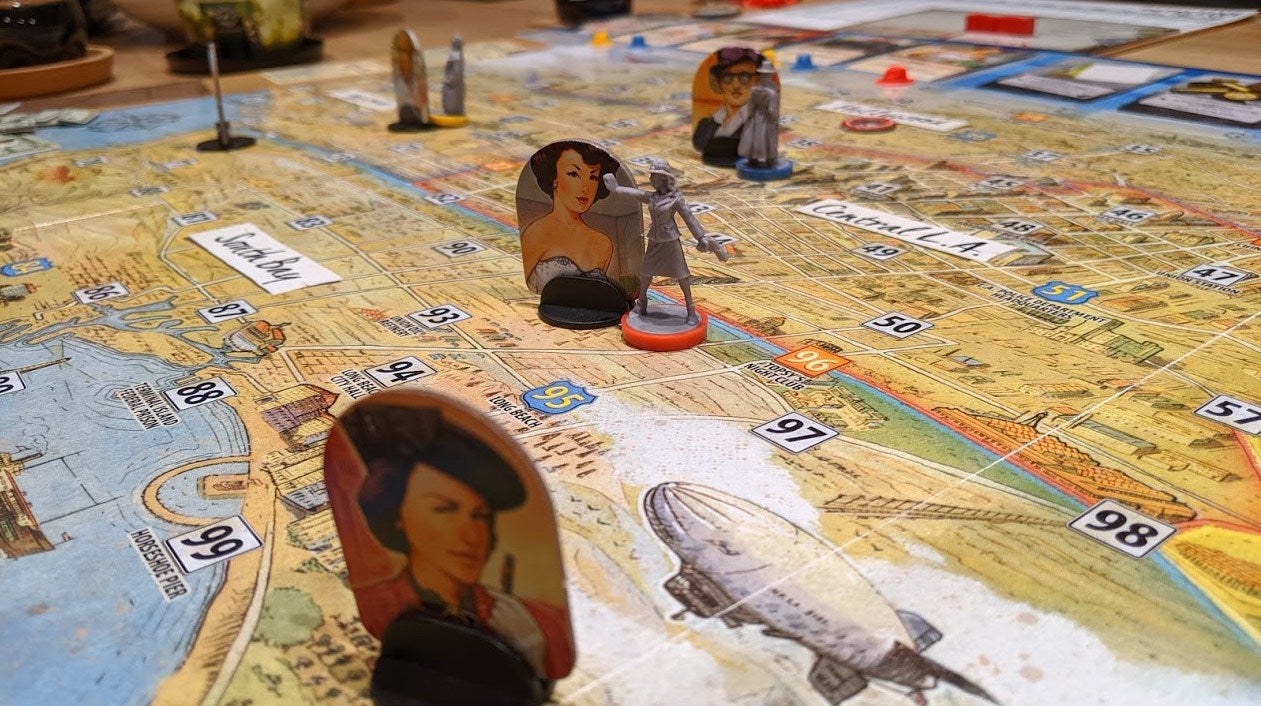 This mode is fine, but it also pits detectives against one another, which keeps things weirdly solitary. It’s also vulnerable to the whims of the Chisel, who could derail the entire game if they want to act like an arsehole (indeed there’s a special section in the rulebook warning against this).

Another way is for two or more players to team up, with one person playing the Chisel and everyone else sharing a single detective. This is more fun, as it leads to more collaborative play, but it also triggers a more aggressive form of play from the Chisel, who is now motivated to beat the detectives, not just control the experience.

The highlight for me was the third and final way to play, Sleuth mode. Here there is no Chisel (their role is delegated to what’s basically an AI, the game’s case notebook), just a bunch of detectives roaming the map, working together to solve a crime. While this eliminates some of Detective’s “gamier” elements, I actually prefer the slimmed down experience because it gives the game’s interrogation system more room to breathe, and gives players a chance to kick back and chat about their theories, and coordinate just where they’re heading and what they’re searching for.

I really felt like a detective sounding out my hunches, and it’s a thrill discovering new evidence and seeing how it impacted my suspicions. It’s rare that a game that puts you in a role actually has you feel like you’re doing that job, but Detective really succeeds on that front. 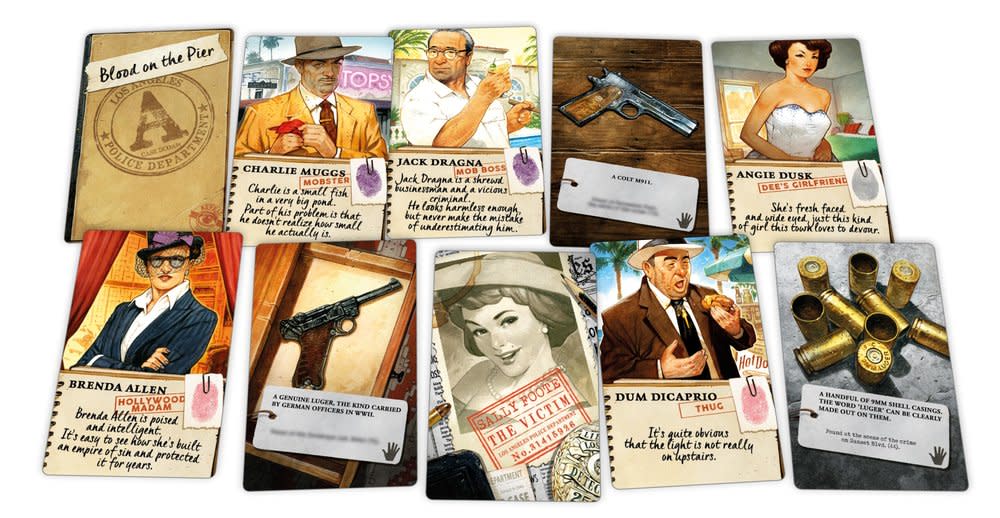 The art in Detective is glorious, some of the best I’ve ever seen in a board game. Vincent Dutrait’s pulpy comic illustrations leap off the table and are oozing with personality, right down to the big bright board itself, which is based on Karl Moritz Leuschner’s iconic 1932 map of Los Angeles.

Adding to the immersion are the game’s case briefings. While each one is written in a book for players to read aloud, if you’d prefer — and you really should — the publishers of the game went and hired a professional voice actor to read them aloud in a gritty noir style. You can listen to them here, and they really help set the tone for each case as you’re getting started.

While my experiences reviewing board games over the last few years have opened my eyes to all kinds of new and different kinds of game, from rules-heavy Euros to the simple joys of worker placement, my favourites are still the ones where player interaction and emotions are more important than mastering a system.

That’s definitely the case with Detective. There are rules here, sure, but the fun (and satisfaction from a job well done) comes from cracking some very human puzzles, and the teamwork involved in getting you there.