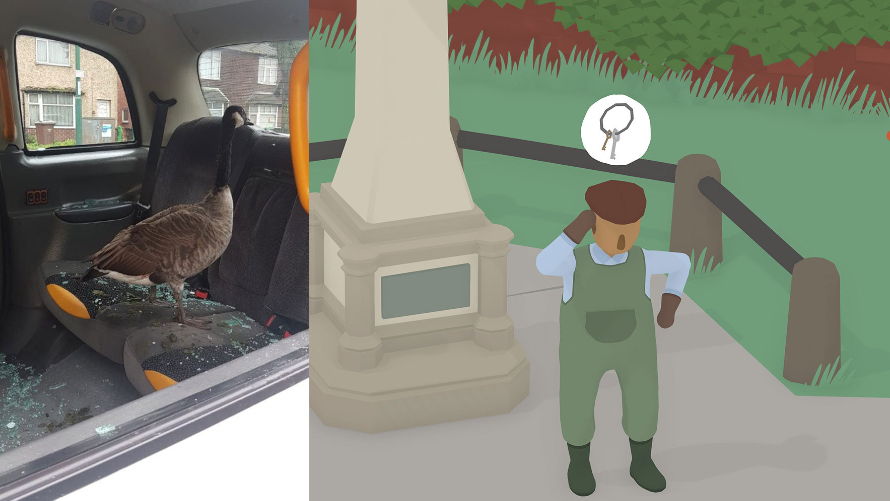 In a clear example of video games directly spurring real-life violence, a Nottinghamshire, England, goose wreaked havoc on an unsuspecting taxi driver and his now-ravaged car.

After its September 20 release, Untitled Goose Game, featuring one goose who terrorises gardens, storefronts and taverns, inspired a mass appreciation for heinous acts of goose crime. Amid an ongoing conversation about video game violence inciting aggressive behaviour in real life, one goose, clearly influenced by Untitled Goose Game, has gone ahead of the flock to commit one of these acts.

A Radford Road Police officer received a radio call about a goose flying into a taxi, a representative wrote in a tweet posted this morning. “We had to see it to believe it,” the tweet read. In the accompanying image, the goose exhibits a power stance in the backseat of a taxi, completely doused in what appears to be greenish goose excrement. Shards of glass cover the floor, seats and door. The goose peers menacingly through the back window, perhaps identifying a new objective on its checklist of nefarious activities.

When a colleague asked if a call had been received about a goose flying into a taxi over the radio, we had to see it to believe it. Goose was taken to the vets & unfortunately the taxi had to repair the damage. We think he may be trying to find his way to #goosefair #randomjob pic.twitter.com/9eWCsjncZH

The Nottinghamshire goose was taken to the vet following the eyewitness’ harrowing discovery.

Tomorrow, nearby Nottingham will begin its historic Goose Fair. For 720 years, humans have been collecting to celebrate the locals who herded thousands of geese on a 80km death march to be sold in Nottingham. Local authorities should be on the lookout for an impending goose uprising as Untitled Goose Game’s popularity continues to snowball.