Gourgeist Is A Floating Pumpkin That Sings Creepy Songs

Every Pokemon is interesting and worth talking about. I don’t play a ton of Pokemon, but I do enjoy the universe and I love learning more about the creatures in it. So, Here’s Another Pokemon! It’s Gourgeist!

The spooky season continues with our next Pokemon, Gourgeist, who is literally a giant floating pumpkin. It’s like the mascot of Halloween. It also has a body that looks identical to a Jack-O’-Lantern. This is strange and leaves me with some questions. Did someone carve this creature at some point? Or is this natural? If it is natural, maybe this is the inspiration behind carving pumpkins in the Pokemon universe? Someone saw this thing and looked at their boring, un-carved pumpkin and went, “We should do that to our pumpkins!” And that person was named Jack. Probably.

If this Jack fella did see Gourgeist in his town on Halloween, he was probably afraid of it honestly. These creatures will wander through cities and towns during full moons, singing eerie songs. That is spooky enough, but it gets worse. According to Pokedex entries listed on Bulbapedia, people who hear these songs are cursed. There doesn’t seem to be any info on what happens to people who are cursed, which could be a bad sign for those folks. Or it might be a really lame curse that only makes your bread go stale faster or something like that. Annoying, sure, but not something that kills you or your family.

Gourgeist will also grab prey with its arms, which are those orange bits that look like pieces of long hair attached to the top head. When it grabs its prey it will sometimes sing a happy little song while it watches its prey suffer and squirm. The Pokedex entries don’t specify if it eats humans, but considering this universe and how dark it is sometimes, I wouldn’t be shocked to hear Gourgiest is out there killing orphans or babies.

Some Gourgeist can unlock a secret ability called Insomnia. I assume this is why it is wandering the streets, late at night, while singing creepy songs. When I can’t sleep I usually watch YouTube videos about old LEGO sets or eat a big bowl of cereal. Less creepy and more sad, really. 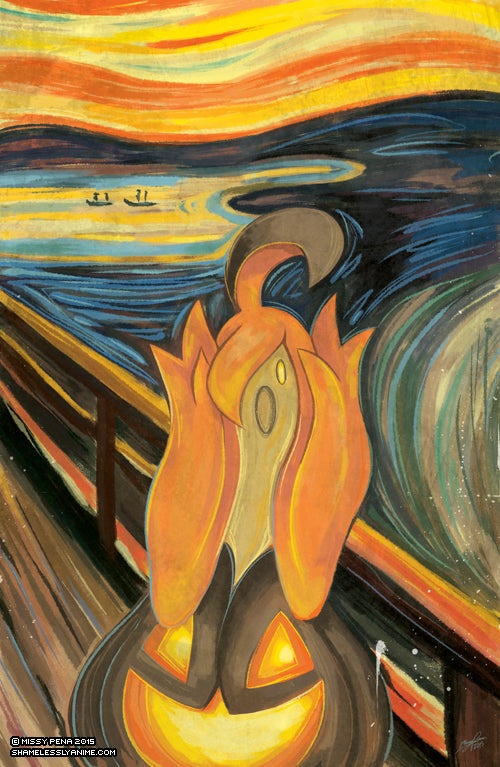 This is such a perfect fit. And the whole piece is so well done too. I want more images like this. Classic paintings with Pokemon added into them.

Wait wait wait, so that essentially means that human souls are Pokémon? What the actual fuck, I’m not OK with this. It also implies that there’s no afterlife in the Pokeverse and that is an incredibly unsettling implication for a franchise made for kids.

There is an afterlife, it just sucks. In Pokemon, when you die you, you become a ghost stuck in a fucking tree stump or balloon or something like that. And then you wander around getting captured and traded until the universe ends.