Late last week, Kotaku reported that Blizzard had reconsidered its decision to withhold Chung “Blitzchung” Ng Wai’s prize money and ban him for a year after he showed support for the Hong Kong protesters. Blizzard is allowing the Hearthstone pro to keep his prize money and has reduced his ban to six months.

In a post-match interview on an official Hearthstone stream, Blitzchung wore a gas mask similar to those donned by the Hong Kong protesters and said, “Liberate Hong Kong. The revolution of our age!”

But as Blizzard president J. Allen Brack pointed out, Blitzchung did not break any rules during play. “We now believe he should receive his prizing,” said Brack in a statement last week.

“We understand that for some this is not about the prize, and perhaps for others it is disrespectful to even discuss it. That is not our intention. But playing fair also includes appropriate pre-and post-match conduct, especially when a player accepts recognition for winning in a broadcast. When we think about the suspension, six months for Blitzchung is more appropriate, after which time he can compete in the Hearthstone pro circuit again if he so chooses.”

The Hearthstone pro has now issued his own statement about Blizzard’s revised ruling. He is grateful to the company for reconsidering its decision. However, he still thinks the six-month ban is too long and wishes the company would reconsider its firing of the two casters who hid under the desk when he voiced his support for the Hong Kong protesters.

Blitzchung’s statement is measured and polite. You can read it below: 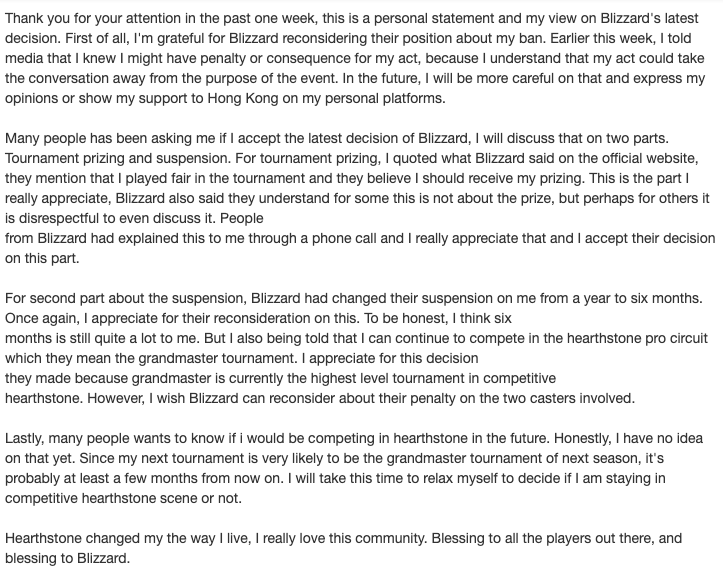