Fortnite Chapter 2 is finally here, and the mystery deepens: developer Epic has only released some vague patch notes, as opposed to the usual detailed rundown of changes that accompanies each season. While it’s been fun to discover things for myself, it has also been confusing. Here are some changes I’ve noticed or seen players talking about so far.

There’s a new option to queue up for the next match from the after-death spectating screen, sparing you a return to the lobby. It’s a nice feature, and in my experience, I haven’t had to wait terribly long between matches either. 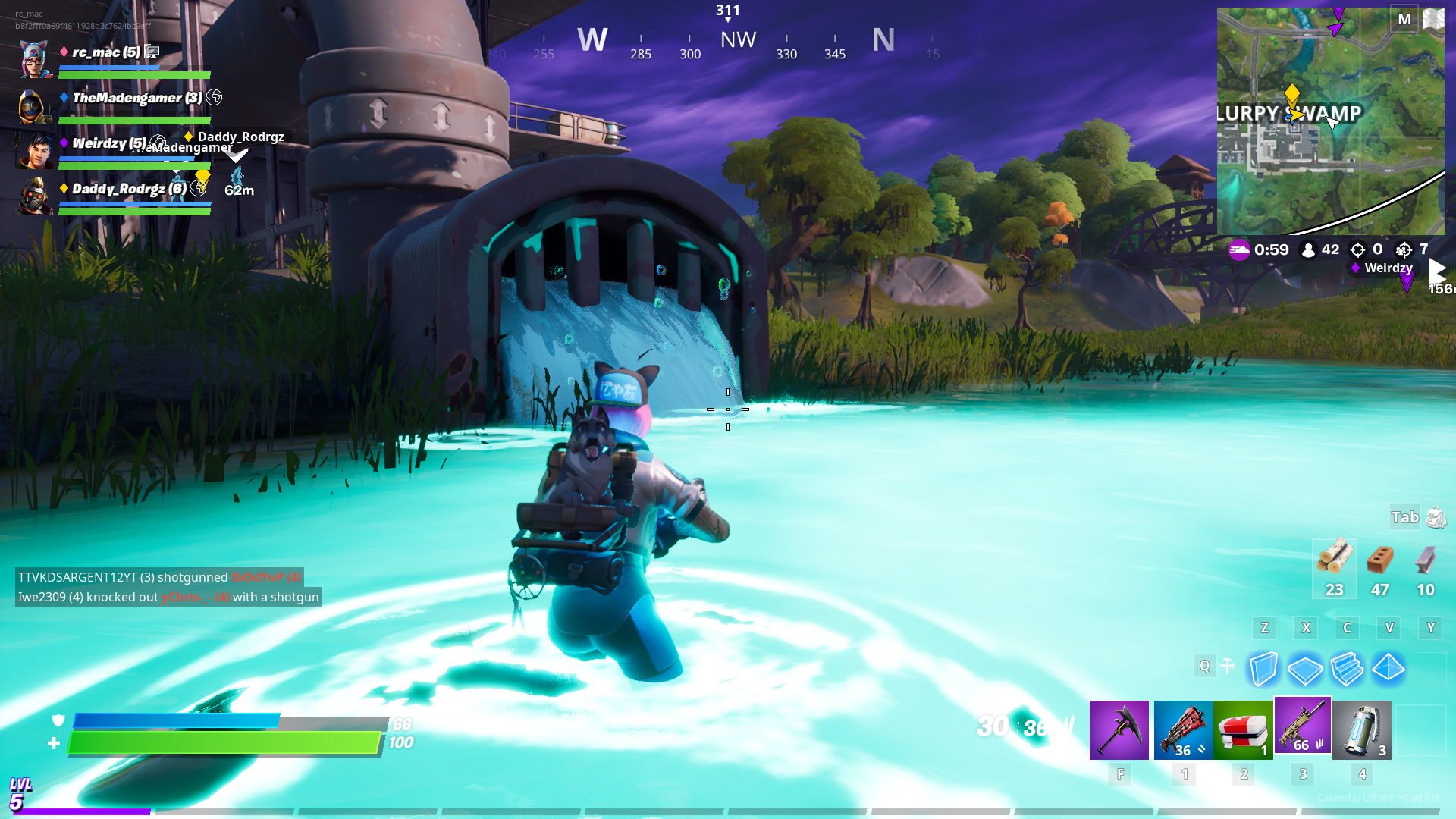 The water at Slurpy Swamp gives you shields

There are 13 new locations on the new map; they’re listed as question marks until you visit them for the first time, which also helps you make progress in an XP-granting mission. The water pouring from some pipes at a spot called Slurpy Swamp looks an awful lot like slurp juice. Turns out it works like slurp juice, too: standing in the glowing water gives you shields.

The pickaxe key has changed

The pickaxe has a dedicated key now. On PC, you used to equip your pickaxe by pressing 1. Now, the key is F. Please do not be me, who goes for their pickaxe only to throw a grenade at themselves instead. (I lived.) You can upgrade weapons

Weapons can be upgraded at an upgrade bench, which are scattered around the map. VG24/7 has a rundown of where some of them are. I found one in a garage at Weeping Woods; giving the bench 150 wood, brick, and metal upgraded my green tactical shotgun to a blue one, with higher-level upgrades presumably costing more. That’s a lot of materials, and I’m not sure it was worth it in my case. But it’s a cool option if you happen to find yourself with enough materials to spare, or if you can tweak an already-powerful weapon into a game-changer.

You can hide in dumpsters and haystacks

Approaching certain dumpsters and haystacks will give you the option to hide inside them. It’s no substitute for the bush, and it hasn’t figured hugely into any of my matches yet, but it’s fun. According to a few players, you can dive into haystacks and dumpsters and not take fall damage, or at the very least recreate Assassin’s Creed.

You can carry downed teammates — and enemies

If you approach a downed teammate or enemy, you’ll get a prompt to carry them. You can hoist them over your shoulders and run around with them. In one of my matches, a teammate picked me up and carried me to a safe place so they could revive me. Helpful! In another match, I downed an enemy, picked them up, and ran them over to the rest of my companions so they could watch me finish them off. Mean!

It seems you can also finish downed enemies off by carrying them someplace high and dropping them, which is overkill, but hilarious.

You can heal yourself with the Bandage Bazooka

Chapter 2 has a new weapon, the Bandage Bazooka, which heals teammates when you fire it at them. It takes up two inventory slots, but it’s worth lugging around. You can heal yourself with it by firing it at your feet.

You can fish for health

There are new findable fishing poles. To fish, equip the pole and use your primary fire to cast it. If you’re near some fish and wait long enough, the bobber will dip; if you press fire again at the right time, you’ll catch something. I caught a fish called a Flopper, which gave me health when I ate it. According to Gamespot, you can also catch fish that give you shields, or come up with weapons or materials. I wouldn’t start playing Stardew Valley in the middle of a Fortnite match, but I can see having a lot of fun with this in playground mode. 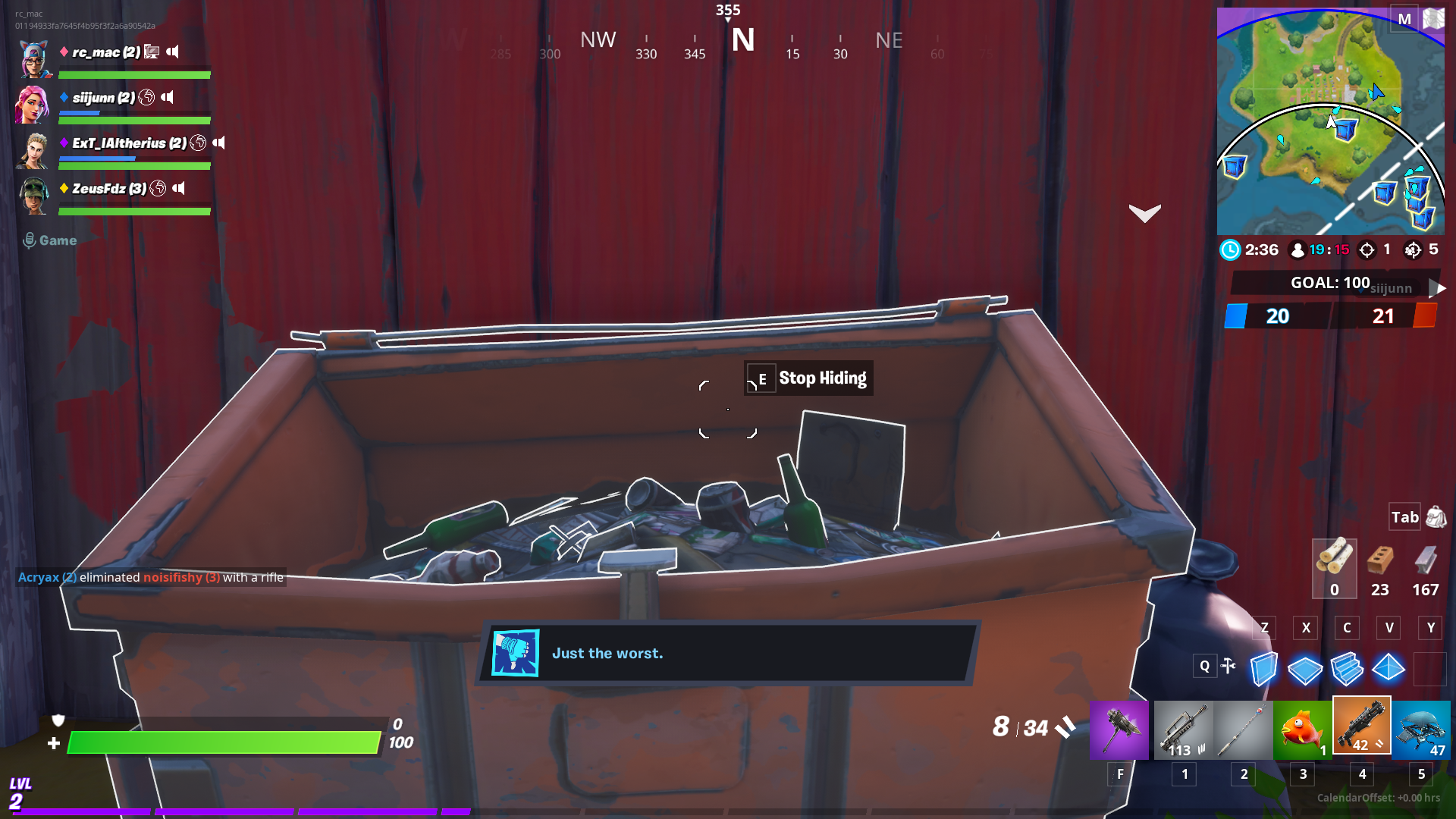 Fortnite has achievements now. You can view the achievements you’ve gotten under the “career” tab. So far, I’ve gotten some for using a bandage in the storm, healing inside a specific location, and landing on the new island. Achievement reporting seems to be a little wonky — some people are seeing the wrong achievements, and my “I’m Trash” achievement does not appear in my career screen. Gamesradar has a list of achievements, but I kind of like the surprise.

Battle stars have been replaced with XP

Battle stars, which used to level up your battle pass, seem to be out — now, missions reward XP, and XP levels up your pass. It feels like I’m getting rewarded with XP a lot more now too, including for doing things like searching chests and ammo boxes, surviving storm circles, and gathering materials. The game notifies you of your XP gain, and it also keeps track of it in a bar at the bottom of the screen. Epic wrote that this season would feature “more fun, less grind,” and so far I feel like I’m making progress faster. 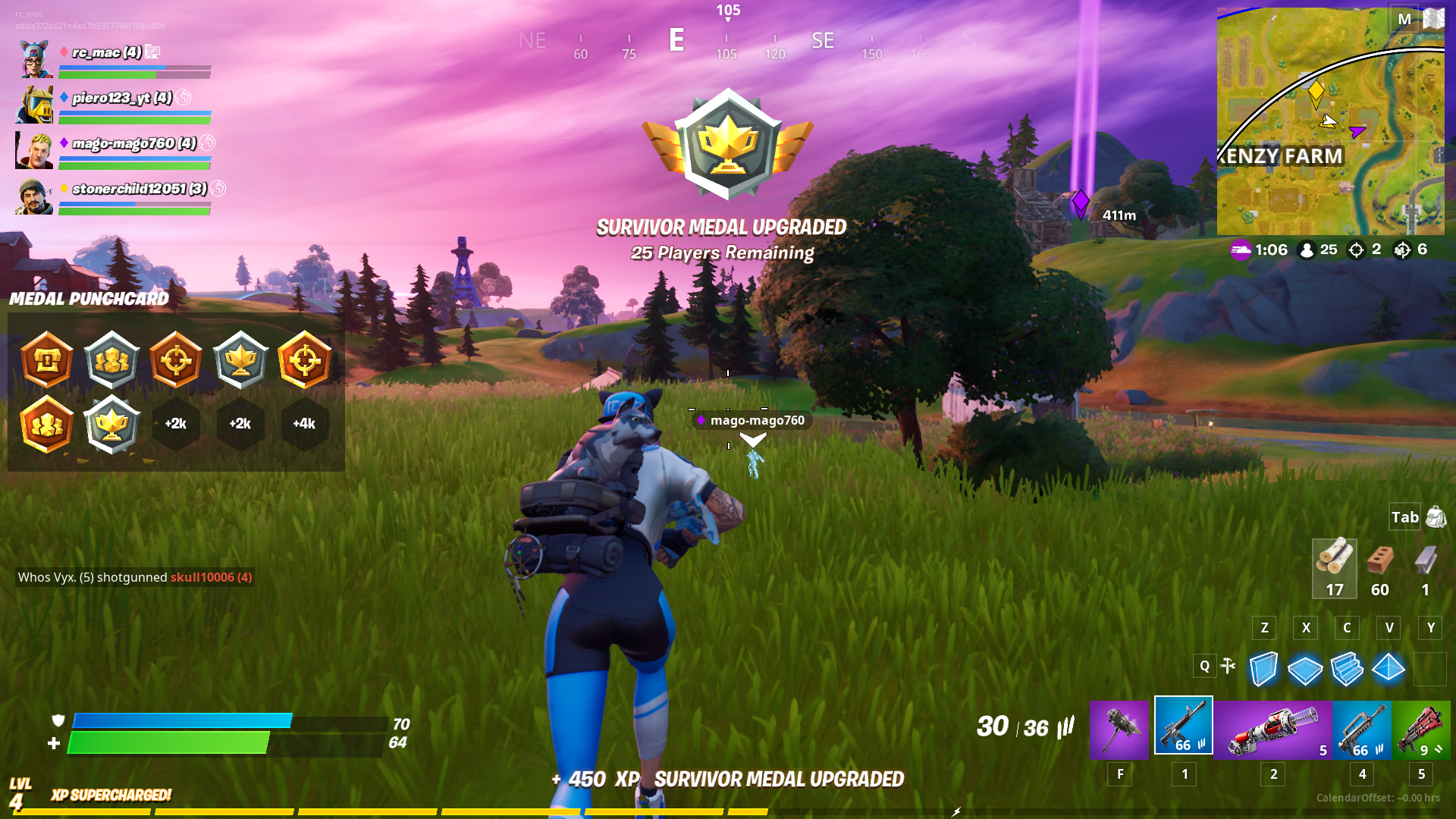 At the left side of your lobby you’ll see a “medal punchcard.” There are 10 medals on the card, which refreshes once a day. The fifth and tenth medal reward 4,000 XP, while the others reward 2,000. You get medals for routine stuff you do during play, such as scavenging and surviving. As far as I understand it, you upgrade the medal by doing the thing it rewards you for more — search enough chests in a match to get a bronze medal, for instance, and, if you keep searching chests, you’ll get a silver one. Once you get 10 medals, you have completed your punchcard and earned all the bonus XP it provides. Once you complete the punchcard you can still earn medals, but you won’t get the big XP bonus.

Epic said last season that computer-controlled opponents would be coming this season, and changes to matchmaking were implemented last season. There’s no official word on bots, but I’ve definitely eliminated some opponents who behaved unlike human players: standing still too long, not shooting back, and not reviving their downed companions. While it’s been nice to feel like I’m doing well in a match, it’s definitely lulled me into a false sense of security — I’m pretty sure I’ve assumed an opponent is a bot and let down my guard, only to have them do something unexpected and surprise me. As you level up, you should see fewer bots and face off against more humans.

Do you know any tricks or changes I missed? Have some bot-spotting tips? Leave them in the comments!