Forza Horizon 4 is one of the best driving experiences you can have without getting off your couch. But it, like most video games, requires two hands to play. Luckily for those who are not so-equipped — like me, unfortunately, at the moment — Microsoft makes a special controller that can be configured for just about anybody and any body.

The Xbox Adaptive Controller is a remarkably versatile device. Centralised by a platform-like hub with two big buttons and a directional pad; it’s also bristling with ports that can accept a bunch of different input devices. Joysticks, buttons, pedals, even mouth controls, and other very specific clickers can all be easily plugged in and mapped to Xbox controller button functions. 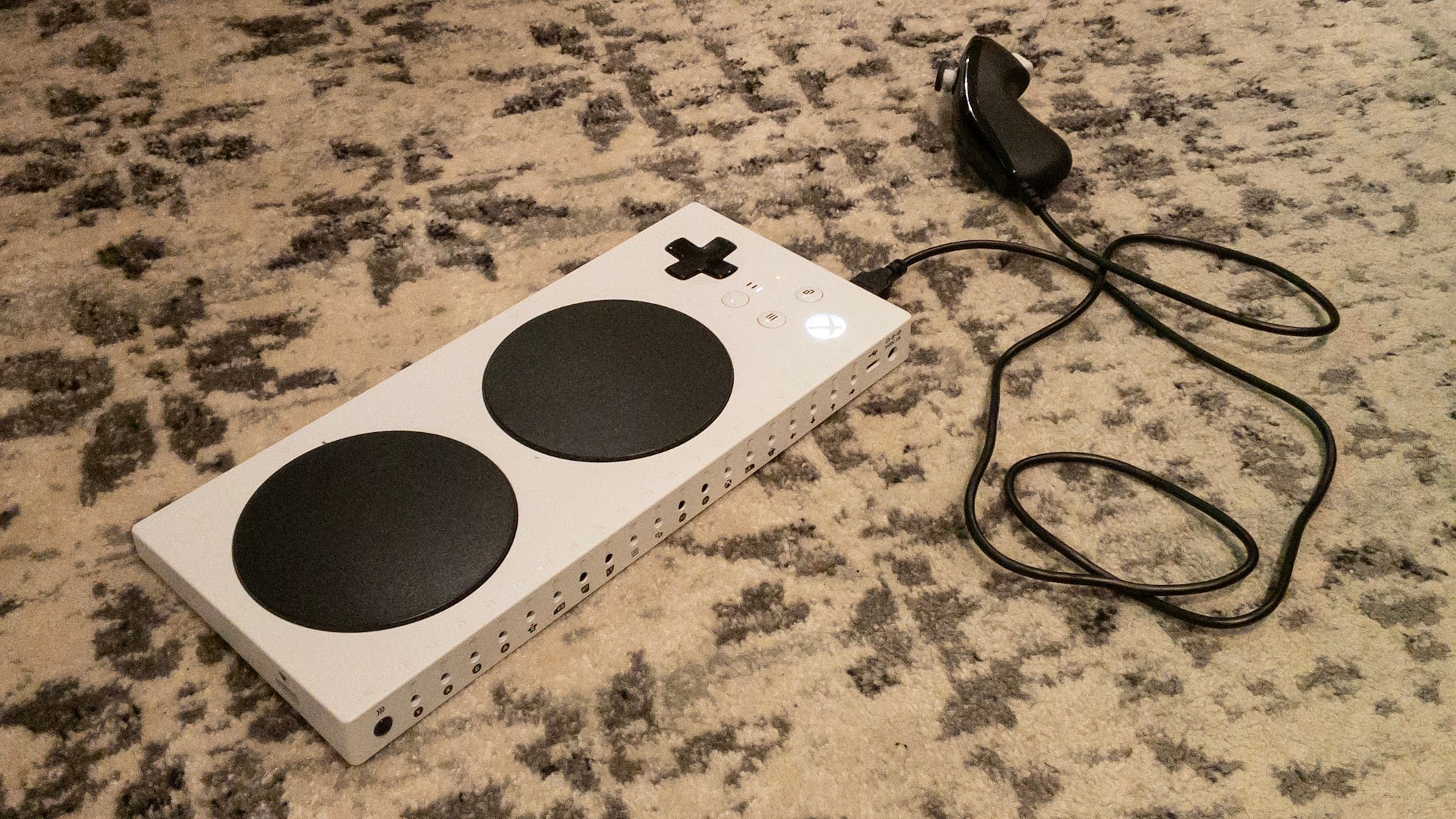 The hub itself is wireless, just like a regular Xbox One controller, so you can use it from a couch or a wheelchair or wherever and sit far from the TV while keeping the wired controller accessories within reach.

Ergo: “…a gamer can game with one hand and one foot, or one hand and their shoulder, or even one foot and their chin,” as Microsoft Product Marketing guy James Shields explains in a surprisingly emotional promotional clip.

After a bad off-road wipeout in real life relegated me to my apartment and rendered my left hand useless for many months of the past year, my colleagues were kind enough to send me one of these controllers.

Here’s how I dialled it in for driving around digital Scotland in Forza Horizon 4. 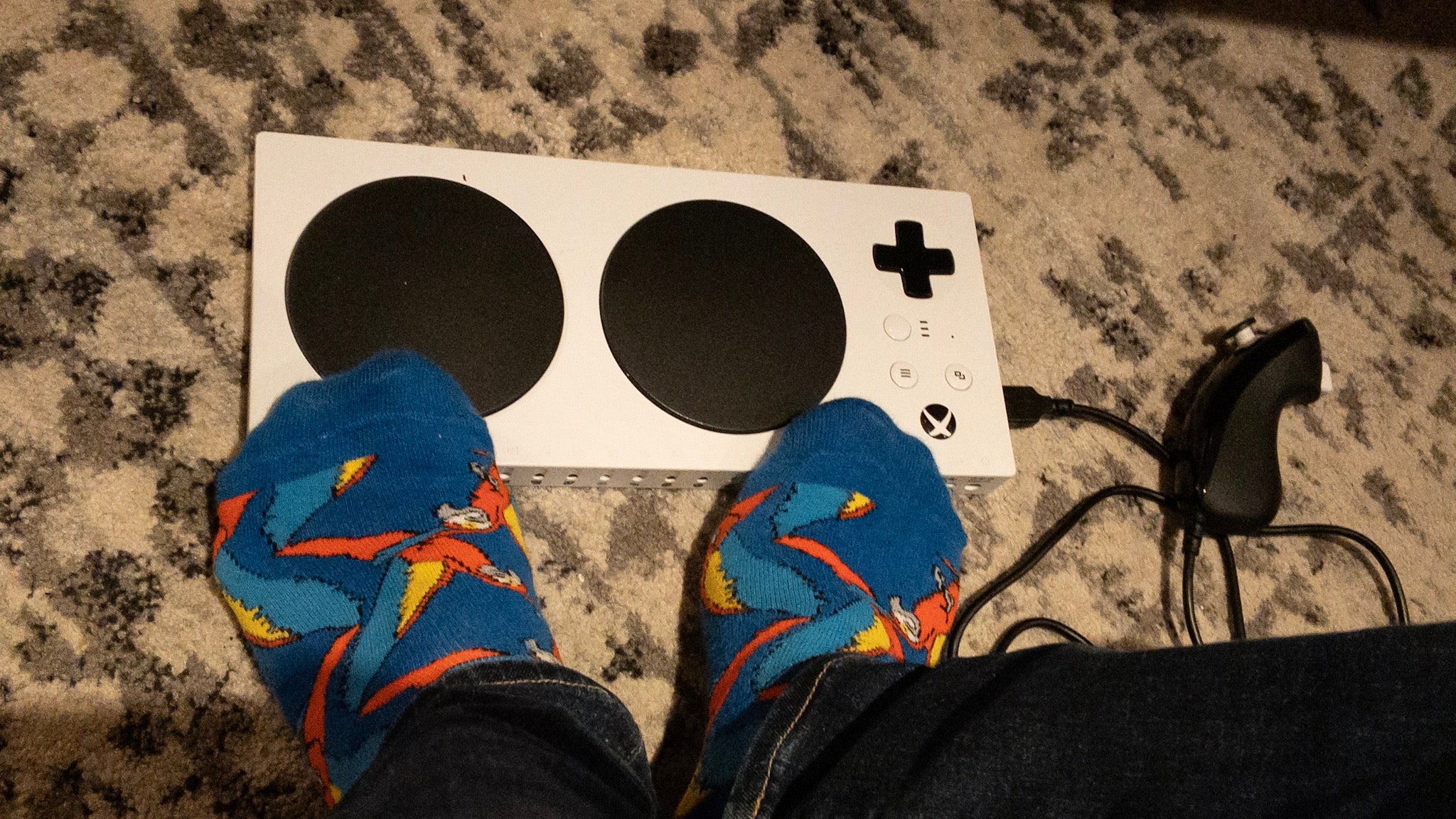 My gaming posture puts my arse on the couch, Adaptive Controller on the floor, and nunchuck accessory in my right hand while my left rests or runs occupational therapy exercises. (It’s called multi-tasking.)

Here’s an important and odd aspect though: the nunchuck is actually plugged into the left port, but I turn the whole Adaptive Controller around so it’s physically on the right. This is partially so the brake and throttle are where they’d be on a car, but also so I can use the clicker buttons on the nunchuck to activate the left bumper button, which you need to enter races in-game in Horizon 4.

I click the big buttons with my feet, using the left for brake and right for gas, and use my right thumb to steer. That’s all I really interact with during gameplay. 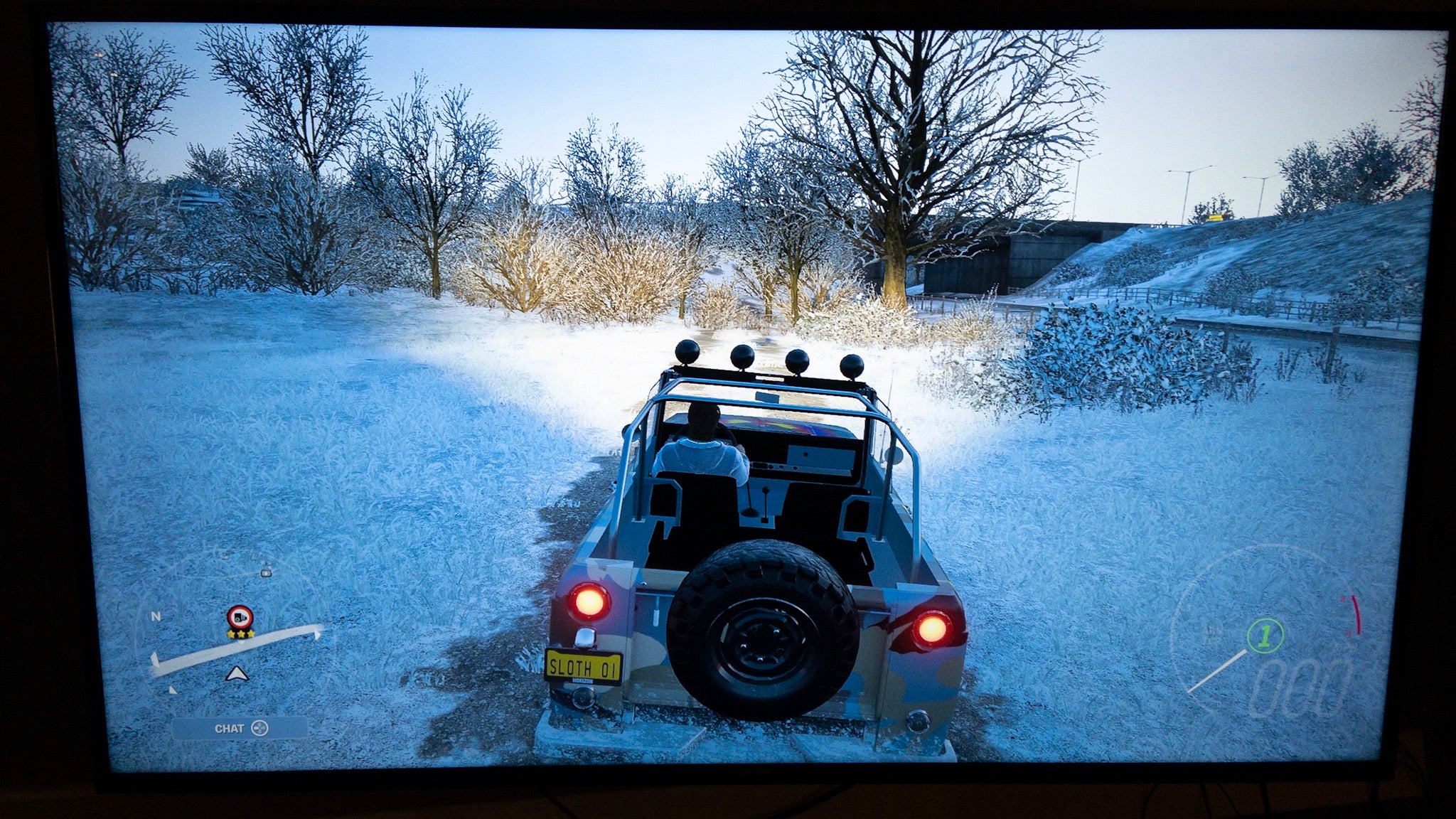 The Adaptive Controller also has a start button to pause, a select button to bring up the map, and a directional pad I use for changing the music, pulling the handbrake (extra realism since I have to reach down for it!) and cycling through menus. To get to any of those, I have to bend and stretch, but it’s alright because they’re not needed often.

With this configuration, I can be pretty competitive and usually win races with opponents set to the “inexperienced” difficulty. Though I have won on more challenging settings, I’ve been playing racing games since the original NES was barely obsolete and I’m confident in assessing that hand-and-foot gaming is a lot harder than using a traditional game controller. Point is: prepare for a steep learning curve if you’re moving from a regular clicker to a unique special-needs setup like this.

Anyway, I’m grateful that this option exists at all. But the Adaptive Controller doesn’t come out of its box ready to play like this. You need to configure both the game and the controller itself to work for you.

In Forza Horizon 4 you can’t map specific buttons to functions individually, but you can cycle through quite a few controller presets.

For use with the Adaptive Controller and nunchuck, particularly in the way I described above, I run with Default Layout 9: 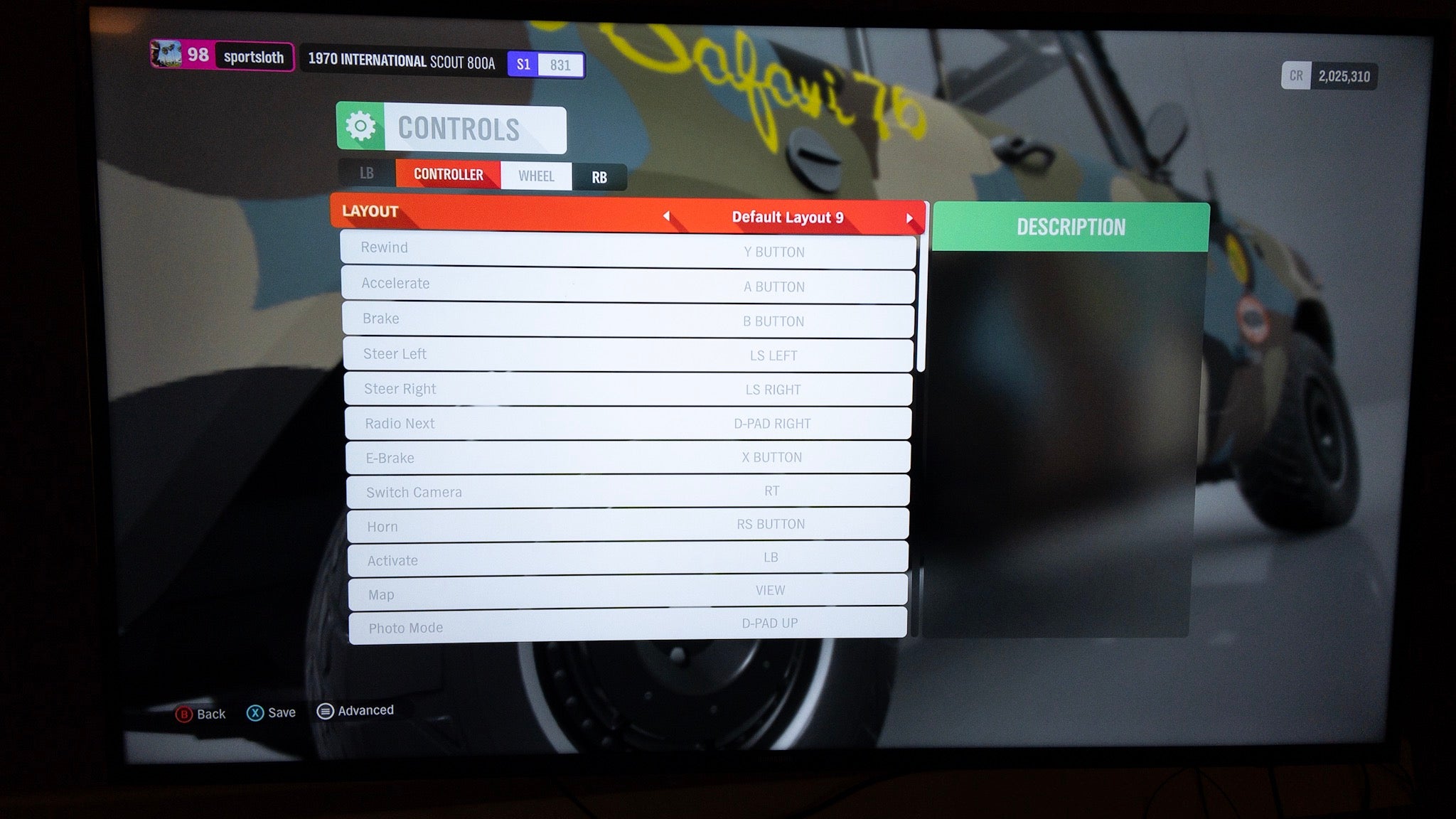 Basically, you need the A and B buttons for throttle and brake, LB for selecting things, RB for moving through menus, D-pad right for changing the radio station (they’re all so good, you don’t want to skip this) and D-pad down for e-brake for sweet, sweet snow drifts.

Don’t forget, if you turn the whole controller around as I do, the directional buttons will be reversed from the user’s perspective. The stick for steering will not be backward, of course, as that’d be impossible to drive with.

That’s kind of the minimum controls you can get away with accessing to have a good time in Horizon 4.

I haven’t messed with the advanced adjustments yet, but you can if you want to fine-tune your controller’s responsiveness. 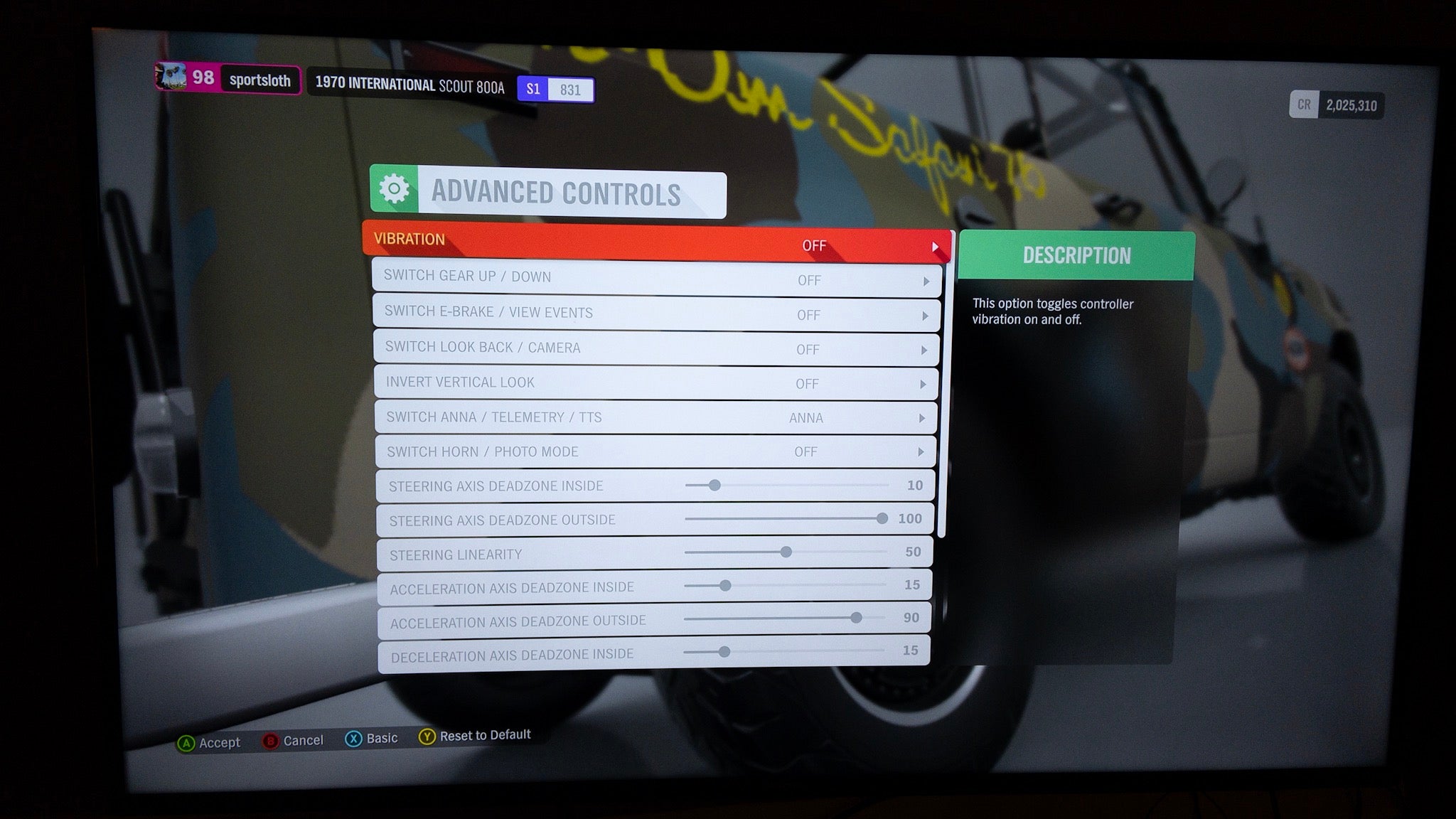 In the difficulty settings, I left the mistake-erasing “rewind” off originally but it does make races a lot easier to win. Otherwise, I’ve found that the combination of traction control on but stability control off lets you have fun and slide around, but also makes it slightly easier to accelerate in snow and mud in, say, a 900 horsepower Lamborghini. Which is a thing that happens in this game. 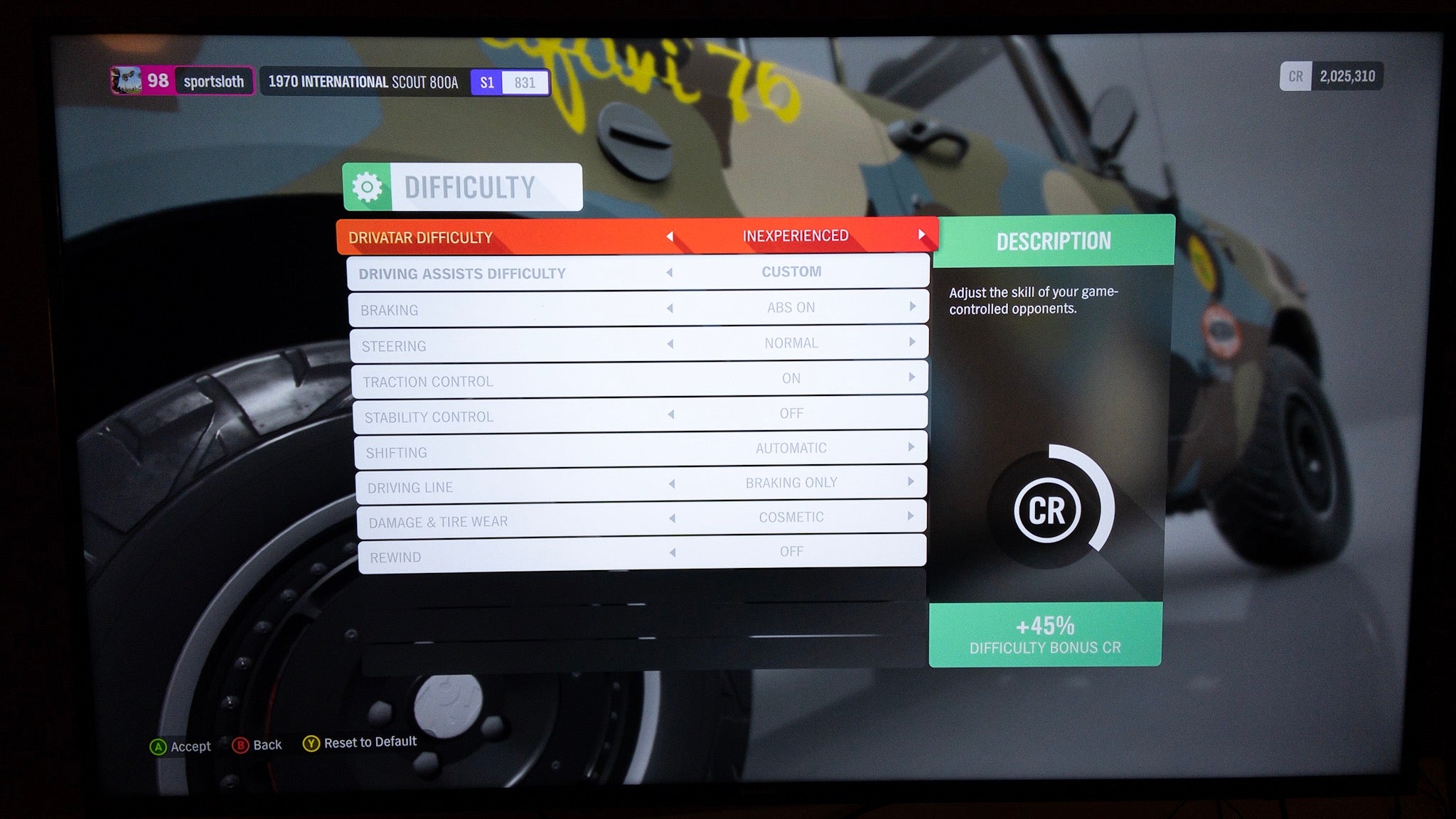 The Adaptive Controller has its own mapping program you can open like any other app from the Xbox home menu. I have mine programmed thusly: 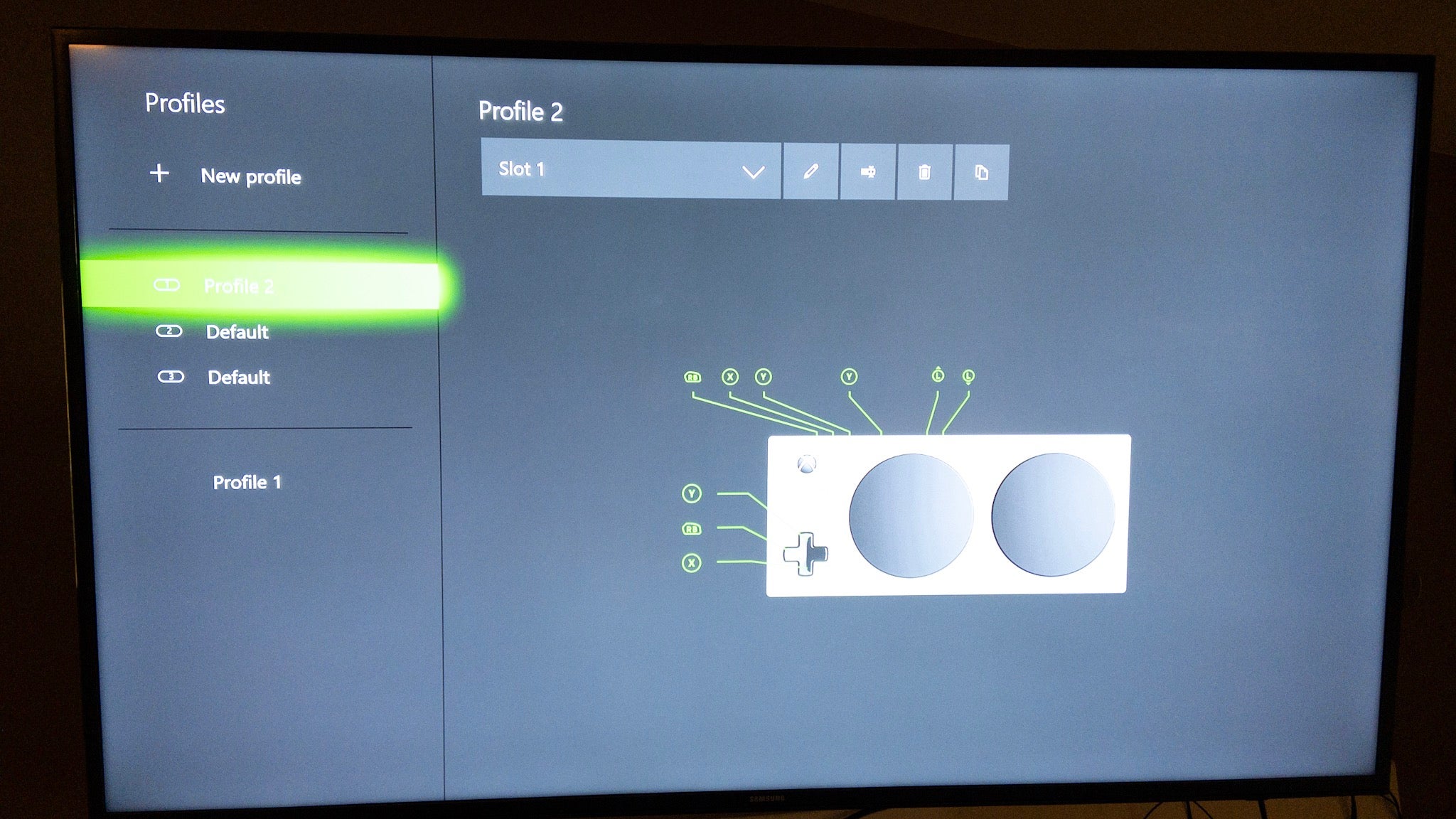 For my configuration, to use in conjunction with Forza Horizon 4’s Default Layout 9, and the controller backward, the important parts are to map: D-pad down to X, D-pad left to RB, D-pad up to Y, and I actually haven’t messed with D-pad right but maybe there’s another function you might want to add there.

If you were hoping to drive a manual-shift car, sorry, I haven’t been able to crack that one for myself or my fellow one-handers. The in-game messaging is inaccessible too, so, if you’ve messaged me and been mad I haven’t replied, don’t take it personally. I just can’t reach the chat button.

Also, I have not successfully been able to do much in photo mode without a standard controller yet.

The setup I just described is the best way for a one-handed person to play Forza Horizon 4 on Xbox One based on quite a few hours of my personal research.

However, in case that doesn’t work for you, I also reached out to Microsoft and Turn 10 Studios, and they got back to me with their official recommendation for how to game this game with an Adaptive Controller:

I’ll point out that the “official” remap there requires another external button in addition to the controller and nunchuck. But, the team also forwarded how to play the game one-handed without buying any extra accessories at all:

“You can also play ‘Forza Motorsport 4’ with one hand using a traditional Xbox Wireless Controller, using presets available in the game’s “Controller Options” menu – these presets put essential controls (steering, gas and brake) all on the left side, or the right side depending on a player’s preference.”

Video games, especially internet-connected modern ones, are a great way to get out into the world when your physical body cannot.

The fact that this Adaptive Controller exists is a real boon for the gaming community, and I’m excited to say that it’s really brought me very genuine joy in a dark time of my life.

If you or somebody you know is physically barred from gaming, or driving, and hasn’t heard about this I hope this blog gets them into Forza Horizon 4. If you’re already using a setup like this and have tips for us one-handed video game drivers, I hope you’ll share them in the comments.

I’m not sure where the best deal for the Xbox Adaptive Controller is, but here’s the main listing in the Microsoft store, where you can also find a big quiver of accessories for it.