Kaiserreich, The Mod That Changes The World

I’ve played countless mods for countless games over the years, and few have been as comprehensive or enjoyable as Kaiserreich, a reimagining of the 20th century that takes everything we know about history and politics and throws it right out the window.


A long-running mod for Paradox’s Hearts of Iron series, Kaiserreich’s latest iteration (for the excellent Hearts of Iron IV) drops the player in 1936 to confront a world unrecognisable from our own, one in which the Germans won the First World War, the political spectrum has no space for words like “fascist” and “communist”, the United States descends into a second civil war and the red menace is rising in Western Europe, not the East.

I realise that by saying “Paradox” and “Hearts of Iron” I’m already losing some of you. It’s a game that will alienate a lot of folks, as it is complex, unfriendly and definitely not for everyone in the way that gentler strategy games like Civilization or Total War are. But I honestly think this mod is so good that it makes the game worth learning, if not for the fun of just playing Hearts of Iron IV, then at least for exploring the world that the mod’s creators have built.

Despite the mod’s age, I’m relatively new to it. The basic premise, of exploring what the world would look like if the Germans won the Great War instead of the Allies, didn’t really interest me at first, especially given the reputation Paradox games have of inspiring mods that… well, let’s say might enjoy that setting a little too much.

How wrong I was. Kaiserreich takes the idea that Germany won a World War and, instead of using it as the foundation for a Nazi fantasy, uses it as a means to see what a world looks like where Nazis never existed in the first place. Without the collapse of the Weimar Republic, and with Italy divided, the conditions that led to the rise of first Mussolini then Hitler have been taken away.

That’s not to say there aren’t bad guys. The major powers can all be taken in directions that aren’t exactly savoury, especially the USA, whose Second Civil War sees the creation of the Christian-Fascist American Union State.

Kaiserreich also features a simmering threat from a movement called “Totalism”, which attracts many of the game’s 20th century actual fascists (like Oswald Mosely) who, instead of being drawn purely toward the far right, are proponents in this fictional universe of what’s essentially a grassroots Stalinism instead. 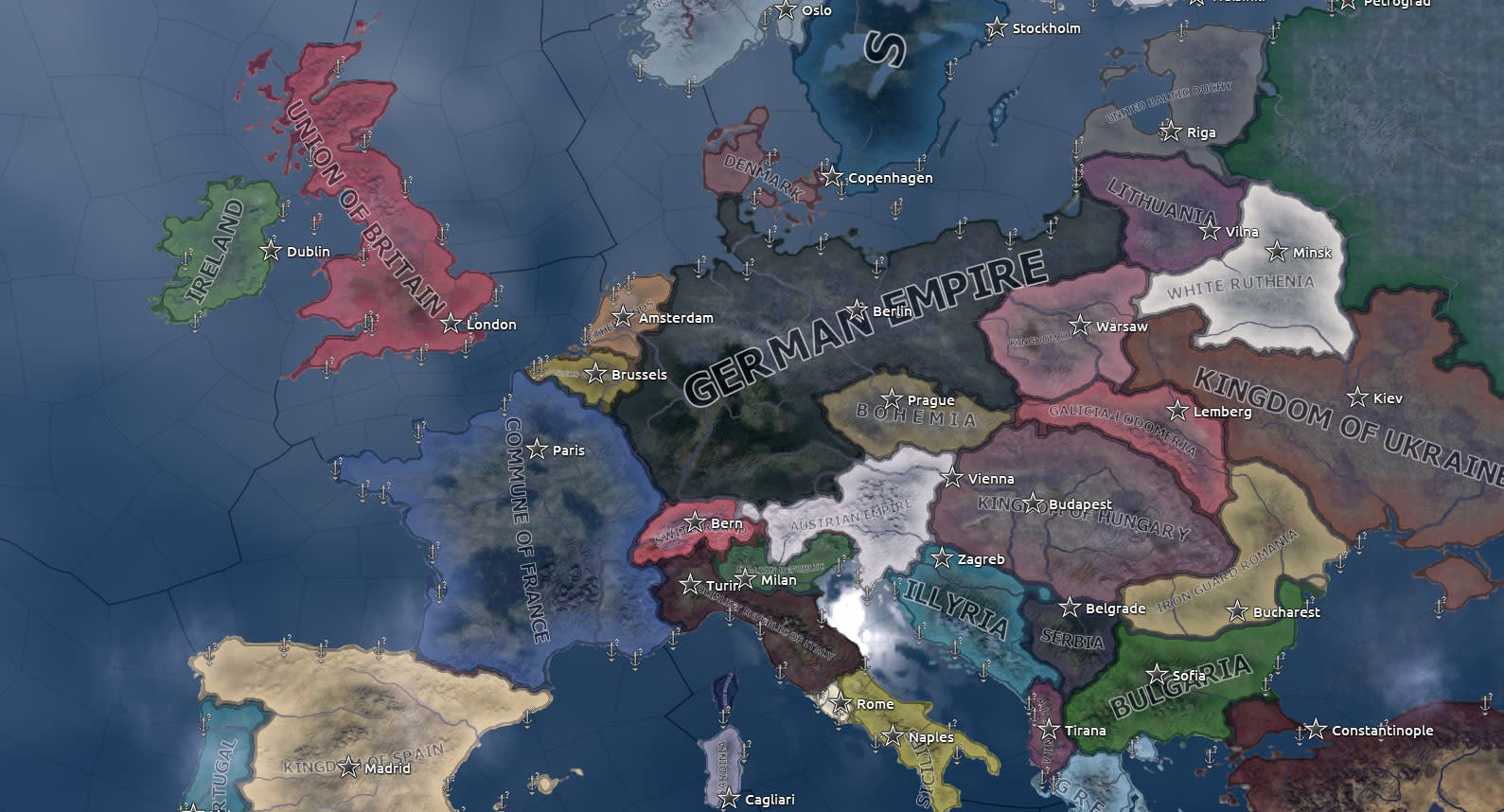 Europe, 1936. While it bears a superficial resemblance to the real deal, in reality much of Central and Eastern Europe is under German control, with only an impoverished Britain and France opposing them.

The most important deviation from our own history is in the rise of Syndicalism, Kaiserreich’s most expansive and divisive force. While it’s obsession with the imagery of factories, the working man and the colour red initially has you subconsciously figuring “oh these are just communists”, the reality is that they’re actually a fascinating combination of classic Marxist theory and the democratic heritage of Britain and France:

Syndicalism is the leading Marxist revolutionary ideology which promotes democratic federations of collectivised trade unions as the basic political and economic units of the socialist state. Trade unions are equally owned by its members, have complete economic and political control over the workplaces they organise and are given great amounts of autonomy from the central government.

On a larger scale, the various trade unions elect members to regional and national trade union congresses which form the legislative and executive powers of the central government.

The way I’ve had to explain all that is a big part of what makes Kaiserreich so entertaining. It manages to create a world that somehow feels alien, in that the labels and movements we know from history have been deformed, and yet once you’re in it also strangely believable, since these fictional forces are still vulnerable to the same human impulses that shape and distort our own political alignments. 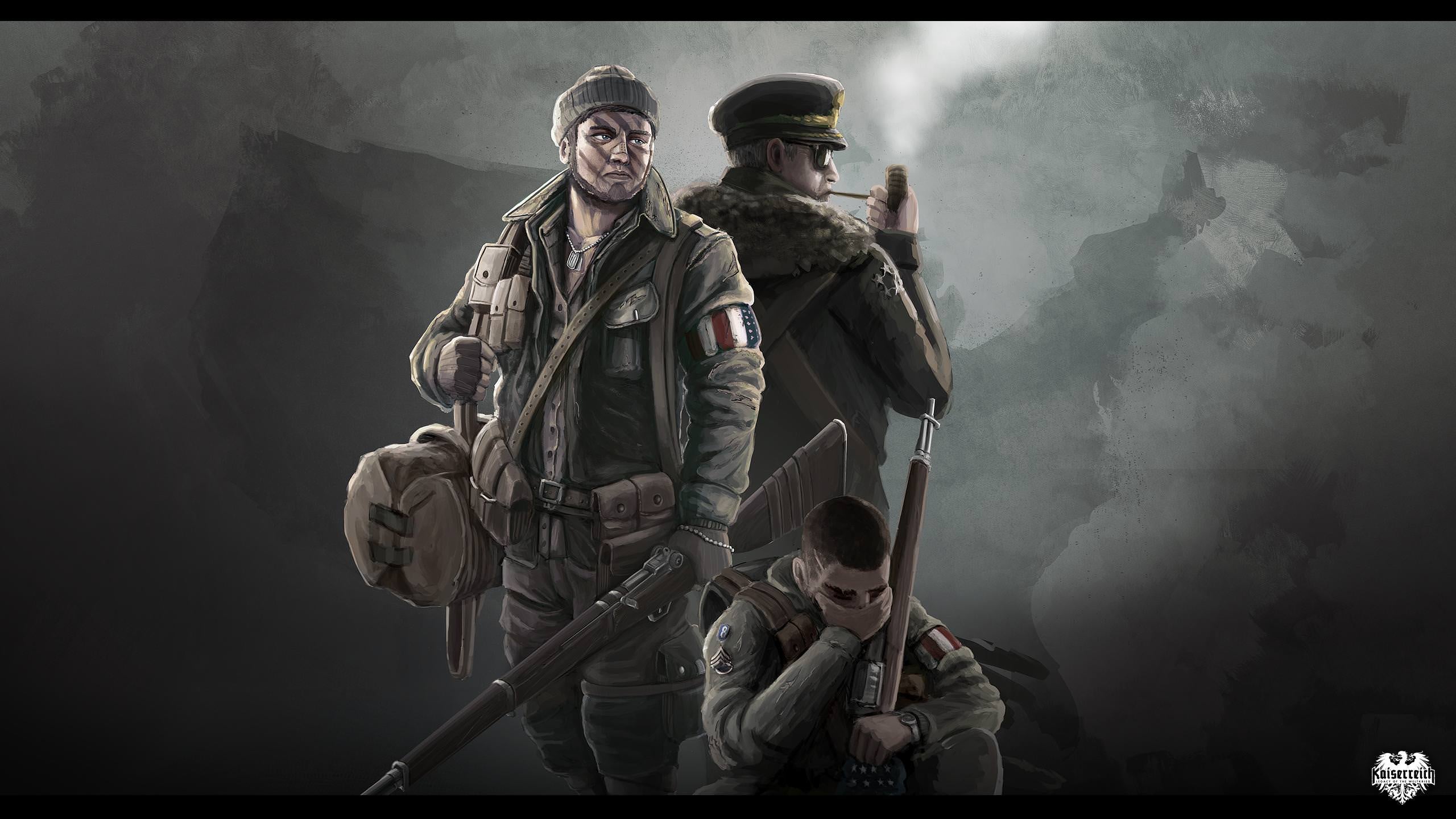 The Second American Civil War is triggered by Douglas MacArthur’s seizure of the White House. Art by Vincent De Nil.

Everything I’ve described so far is just the absolute basics of the world of Kaiserreich, the foundations upon which each game is built. As much as it is to take in as background reading, the truly remarkable thing about it is how breathtaking in scope the mod is once you actually start playing.

In true Hearts of Iron fashion, as soon as you take control of the game, you can begin shifting the fate of your chosen nation by moving down Hearts of Iron’s “Focus Tree”, a series of policy decisions you make that can alter your politics. In the vanilla Hearts of Iron experience, these changes are incremental, and their consequences are fairly limited, since the rest of the world is still carrying on in a historical fashion. Make America fascist if you like, the war is still probably going to involve the Nazis invading Russia, and Japan overreaching in the Pacific.

But in Kaiserreich, you’re setting off what feels like an infinite number of sliding doors moments every time you move. Every nation has a fictional backstory (or at least one from 1917-1936), and every time you play these coalesce and collide in different ways, so Kaiserreich’s past is much more malleable than our own. Each time you play the focus of the war can be entirely different.

The last three games I’ve played have featured radically different World Wars. The first, playing as Japan, saw my fledgling democratic state drawn into a massive land war in China against a reborn Mongol Empire, which would eventually drag the other major world powers into a conflict raging from the Himalayas to Thailand.

The second, playing as Britain, saw a German invasion of France rebuffed, only for the Syndicalists to spend the next five years bogged down in the killing fields of the Italian Alps. And the third, as Canada…well, I don’t know if I can describe it better than “everything from South Africa to Argentina went to shit after the South won the Second American Civil War”.

Every time anything happens in Kaiserreich, there are volumes of news briefings and event reports that are generated, detailing the political climate and the results of your actions. Whether you’re invading Ireland as a Syndicalist Britain or crushing Totalist reactionaries in the Australian outback, it seems like every possible outcome has been prepared for, written and fleshed out to provide maximum immersion for the player.

The world-building even extends to Hearts of Iron’s weapons, aircraft, leaders and celebrities, some of which are actual historical objects/figures repurposed for this alternate universe, others simply made up to suit the needs of the story. 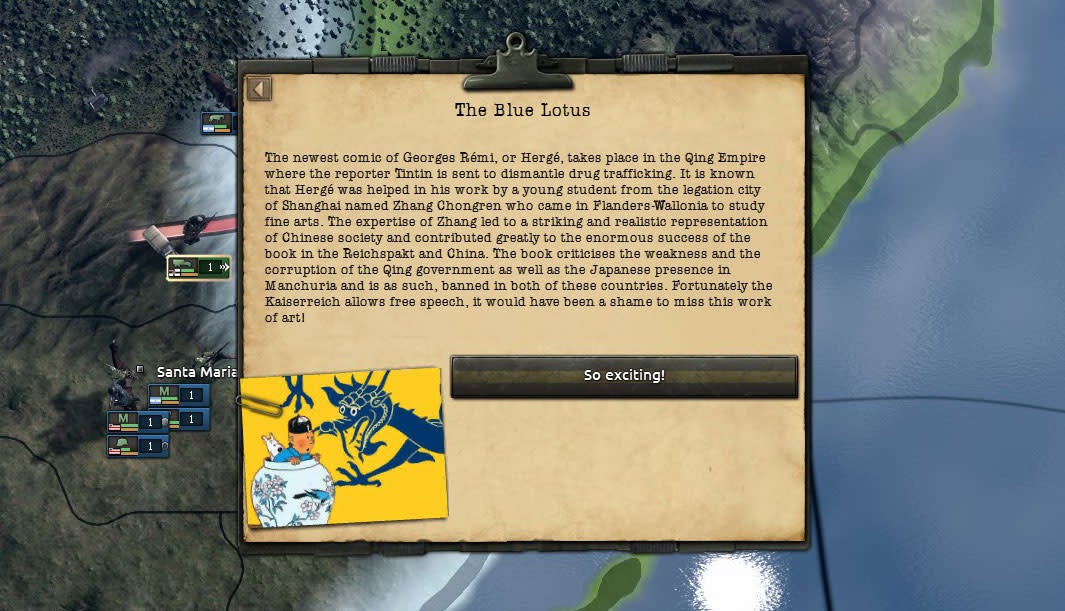 Kaiserreich’s narrative breaks aren’t always about battles and political decisions. Sometimes famous authors, celebrities and politicians from our own timeline are reintroduced in their Kaiserreich form, from Hitler (now an obscure WW1 veteran and author) to Lawrence of Arabia.

To be clear, none of what I’ve described so far directly impacts gameplay. Hearts of Iron IV plays exactly the same in Kaiserreich as it did at launch, so if you’re interested in how it all works, then you may as well read my original review of the base game.

Yet the sheer scale of Kaiserreich’s story-telling and creativity transform the original game. To call Kaiserreich a “mod”, or even the more comprehensive “total conversion” is an injustice, because they both imply this is a tweak here, a graphics pack there, a fan’s casual attempt at reworking Paradox’s game to be slightly more to their liking.

Kaiserreich is so much more, as reflected in the fact the mod’s creators are able to sell merchandise based on their efforts, have their own cinematic trailers and are given pride of place at Paradox’s annual conventions. It’s a world, built from the ground-up, and through Hearts of Iron IV we’re given the tools and the space to let us explore it to its explosive end.