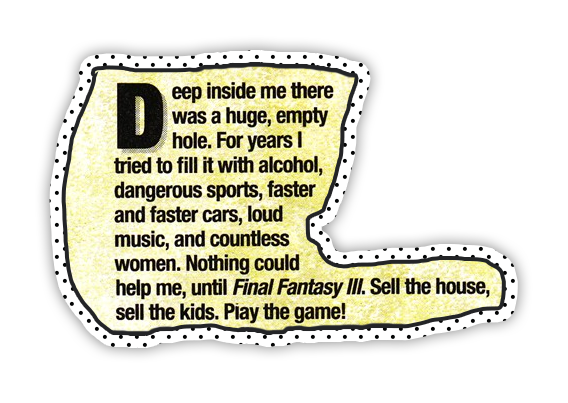 Final Fantasy VI was first released in North America (as Final Fantasy III) eleven years and two days ago, on October 11th, 1994. On Friday, I streamed the game for two hours—after reminiscing on my teenaged hype for the game for half an hour with the visual aide of some scans of the October 1994 issue of Game Players magazine.


I’d played the first Final Fantasy when it came out because a neighbour kid had traded it to my brother for Capcom’s Commando, which is incredibly bad judgment. I played Final Fantasy II (IV) for Super Nintendo a dozen times all the way through. I had learned how to speed run that game because every time I rented it, someone had saved over my file. Final Fantasy II was so expensive that I, at age twelve, could not possibly afford it while it still existed on retail shelves for a few months in 1991 and 1992. (One day in 1996 I found a loose cartridge of it for $US9 ($13) at a flea market.)

To say I’d been “following the news” about Final Fantasy III would be like calling a serial killer a “bad person.” I had literally two things in my life: anger that Squaresoft wasn’t translating Final Fantasy V and hope that Final Fantasy VI would arrive soon and become the meaning in my life. I’d memorized the exact geometry of every screenshot. I’d written reams of fanfiction in my head about the character sprites. I wore sweatpants and ate macaroni and cheese every day.

When I encountered Jeff “Lucky” Lundrigan’s review of Final Fantasy III in the October 1994 issue of Game Players magazine, my hype went nuclear. There was no turning back. It was a loudly raining day in September of 1994 and I stood there in front of the magazine shop next to my local supermarket with all my molecules vibrating. The Pokémon of me was trying to learn a new skill: writing video game reviews.

I’m putting myself all the way out there when I say this, though yes, as a driver’s-licence-less fifteen-year-old who had never talked to a girl or even touched a warm beer can, the references to sex and alcohol in the opening paragraph of this review slashed right through my baby-fat meat and touched my skeleton-bones: here was an adult, talking about loving my favourite game (never mind that I hadn’t played it yet).

I later wrote him a letter for his tips column. I think I put some good jokes in it. He never printed it. Today, 25 years later, I’ll share the first sentence: “I have a huge hole in me, too, though I’m only fifteen years old so I’m only legally allowed to fill it with macaroni and cheese and Sprite.”

Looking back at that from the distance of 25 years, I say it’s not a bad first sentence, for a kid.

Final Fantasy III (VI) arrived at a time in my life when everyone was struggling through The Mayor of Casterbridge in 10th grade English literature class, though I’d already read the whole syllabus and had looped back to reread the books we’d read in 9th grade. (Again: I didn’t have any friends.) I was in the middle of A Tale of Two Cities, and having my mind blown a billion times per chapter: “Why didn’t I like this a year ago?” The answer was, it wasn’t homework anymore.

Final Fantasy III was not homework, either. I played it only on Friday nights, Saturdays all day, and Sunday afternoons. I raked my mind back and forth over the hot coals of that game. I detected every last morsel-droplet of knowledge and lore from its nooks and crannies. I concluded with a nonchalance that it was good like a book the sort of which we might read in English class.

So, Jeff “Lucky” Lundrigan, Hironobu Sakaguchi, Quentin Tarantino, and Charles Dickens: thanks. You did something nice for me in October of 1994. With a casual nonchalance, I declare today that you might have saved my life. I might have never made friends, learned a musical instrument, become fluent in multiple foreign languages, and spent two decades travelling the world if it hadn’t been for the exact palpability of Final Fantasy III’s sense of adventure.

If nothing else, I can say without conjecture that Final Fantasy III’s $US79.99 ($118) price tag presented the Mount Everest of coming-of-age challenges for a friendless, 24/7-sweatpantsing, antisocial teenager. Coming up with that kind of money for a fifteen-year-old (who didn’t get jack for mowing the lawn because my dad was a patriot and we had a flagpole in the front yard and mowing the lawn was pretty much the same thing as loving your country) was a disastrous difficulty.

I did it, though. I had to trade in some NES games and perform some price match wizardry, though I did it. It took me until December 4th, 1994, at which point I’d already played the first ten hours of the game four times on a rental copy, though I did it. That sure taught me a lot.

For example, it taught me that the instant I turned sixteen, I was going to apply for a job at the local Target store. Which I did.

Please watch my stream archive for many reminiscences of this variety, as well as some dissection of this beautiful game’s literature-like structure, and finally, address the question: is this the best Final Fantasy? Spoiler: yes. It’s not my favourite, though it is the best. Objectively.