Luigi’s Mansion 3 Is An Eerie Delight, From The Lobby To The Penthouse

Why is Luigi still scared of ghosts? After all, it was nearly 20 years ago that he Hoovered up an entire building full of poltergeists in the original Luigi’s Mansion. Then he cleared out six haunted houses in 2013’s Dark Moon. As he enters a massive spook-infested hotel in this month’s Luigi’s Mansion 3, one would expect him to handle things with a little more bravado this time. But alas.

Teeth permanently achatter, ghost-sucking vacuum firmly in hand, Luigi returns to the land of the formerly alive in this new Switch game, available October 31. Despite how Luigi feels about the whole thing, I wouldn’t call any of it especially scary, just a charming supernatural comedy in an environment packed with rich detail. There’s lots to do in this haunted hotel and the core mechanic of catching ghosts stays fun the whole way through.

Whether it’s a mansion or a hotel, the gameplay remains the same: Creep slowly through a darkened building full of traps, vermin, ghosts, and treasure, methodically clearing out each floor of spirits and money, using a backpack-mounted vacuum to inhale the specters and put them into cold storage until such time as they are released again in Luigi’s Mansion 4. Finish the floor and you’ll be able to move on to the next, making your way up the floors until the whole thing’s been fully exorcised. 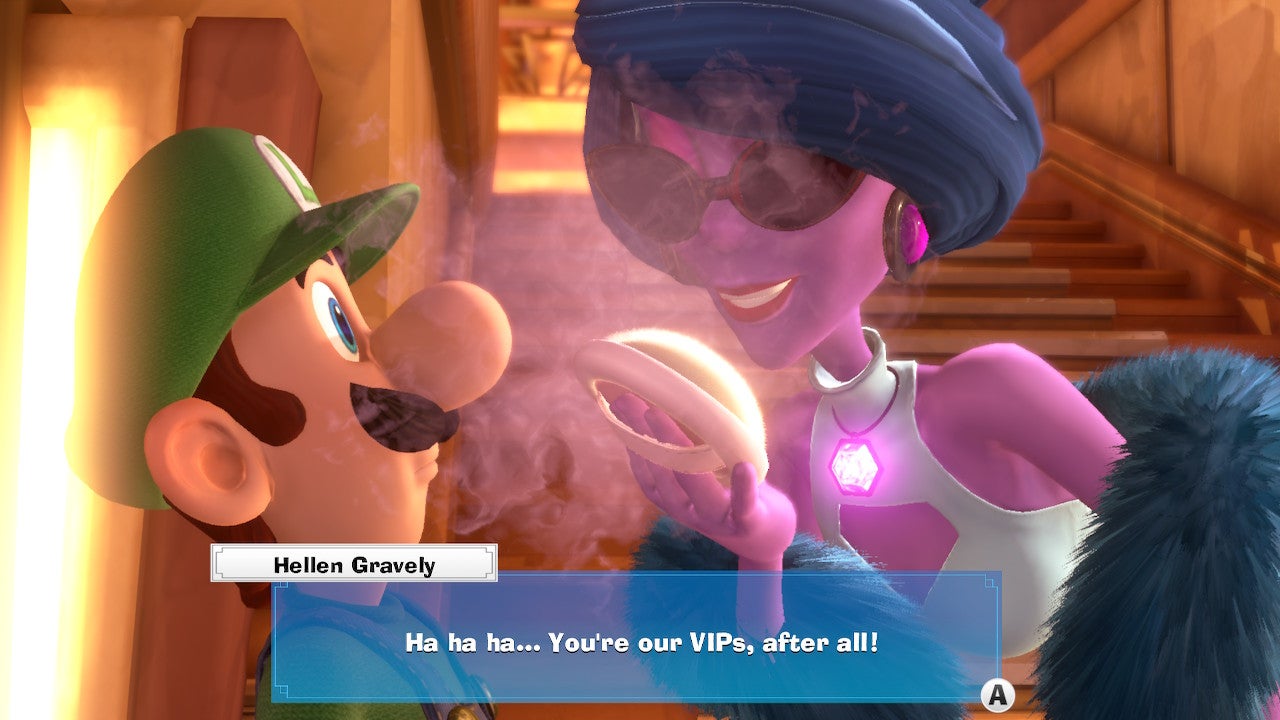 Moreover, whoever architected this place took a liberal approach to the concept of “hotel.” While things begin with what you’d expect—the lobby, a restaurant, some guest rooms—you eventually find yourself in a medieval castle and other places I won’t spoil.

But wait, why is Luigi in a hotel, anyway? It’s because the entire Mario crew has won a complimentary vacation stay there. This includes Mario, Luigi, Peach, and the three major varieties of Toad: Blue, Yellow, and Regular. Five of those people are immediately kidnapped when the hotel reveals its true colours, and it’s up to Luigi to single-handedly rescue them.

Well, double-handedly, as he has a new partner in slime: Gooigi, a replica of himself made entirely out of a mysterious viscous substance. (Who among us, I ask you, would not want this?) Gooigi is a fully-fledged second Luigi who can do almost anything his living counterpart can do, and you can plop him into the playfield at any time by clicking the right stick. Gooigi can pass through grates and pipes, accessing hidden areas or just clearing out lost coins from the sewage lines. Yes, that means that Gooigi actually does something that his dilettante namesake hasn’t in decades: actual plumbing.

Once you unlock Gooigi early in the adventure, you can play through the whole of Luigi’s Mansion 3 in two-player co-op if you choose. I played through the whole game on my own, then did a brief co-op test to make sure everything seemed to work. We had no issues with it. The camera automatically zoomed out to try to keep both players on screen, and when they got too far apart, Gooigi just splatted through the floor and popped up again next to Luigi’s position. No, I have not read your Gooigi fanfic. (Screenshot: Nintendo)

Should you decide to go solo, you’ll still need to use Gooigi often, as many of the game’s puzzles revolve around swapping between both characters. Fire and water will both instantly dissolve Gooigi, which comes into play a lot as you attempt to open up pathways.

Fortunately, you don’t need to rely on Gooigi too much. It would be easy for a developer, having come up with this unique mechanic, to have the entire game be about juggling two different characters, and become tiresome. But for much of the game, Gooigi is optional. You can choose to use him during ghost fights—a particular type of ghost has two tails, and Luigi and Gooigi can each grab one to do double damage—but you’re not forced to in most cases.

Besides his gooey doppelganger, Luigi has a few more moves in the arsenal. The Poltergust G-00 vacuum can suck and blow objects with the L and R triggers, but pressing them both together will cause a big gust of air that shoots Luigi up about a foot into the air and scatters any objects at his feet. He can use the Dark Beam to reveal hidden objects. He can even shoot a plunger (more plumbing!) at objects, which creates a makeshift handle that lets you manipulate otherwise immovable pieces of furniture.

While the hotel has 15 floors plus a couple basement levels, you’ll only have access to a few of them at first. You’ll collect elevator buttons, usually after fighting a boss, to continue your climb to the penthouse suite and the final confrontation. I didn’t find myself especially antsy to keep climbing the tower, though, because it was fun to wring every last secret out of the floors before moving on.

Each floor of the hotel has a unique theming to it, and each room is packed with detail, whether that be hidden passages leading to stashes of cash, puzzles concealing collectible gems, or just funny interactive objects. In one early example, I used the “blow” function of the Poltergust to roll up an area rug, which revealed a secret drain that Gooigi could drip through to find a gem. The series’ fundamental mechanic—surprise ghosts with your flashlight, then vacuum them into your Poltergust when they’re stunned—is relatively unchanged here, although once you get a ghost firmly into your suction beam, you can rapidly press the A button to repeatedly body-slam them to the ground and quickly drain their energy and hurt nearby ghosts while you’re at it. You have to flash your beam into a ghost’s eyes before you can start vacuuming, and of course some ghosts protect their eyes in some way or another, so you’ll have to figure out how to do that, first. But it’s all fairly straightforward.

Navigating the hotel itself is the biggest challenge—puzzling through the passages, figuring out how to interact with each room’s assortment of doodads to open the doors blocking the way. I enjoyed that the game was so dense with these puzzles, although I felt like they could have been clued a little better.

If the game sees that you’re staring at a puzzle for too long, Professor E. Gadd will call in and tell you what to do next. I considered turning these hints off, but when they came through, my reaction was often “Oh, I don’t think I would have gotten that on my own.” I’d rather have seen some of these puzzles clued in a more organic way versus text-based hints.

Boss fights can be much the same; I would often spend a bit too much time just experimenting with every one of Luigi’s abilities until I found the one that arbitrarily worked to break down the boss’ defences. In general, though, these fights were always very clever, charming encounters that I enjoyed playing, so it didn’t matter too much in the end. 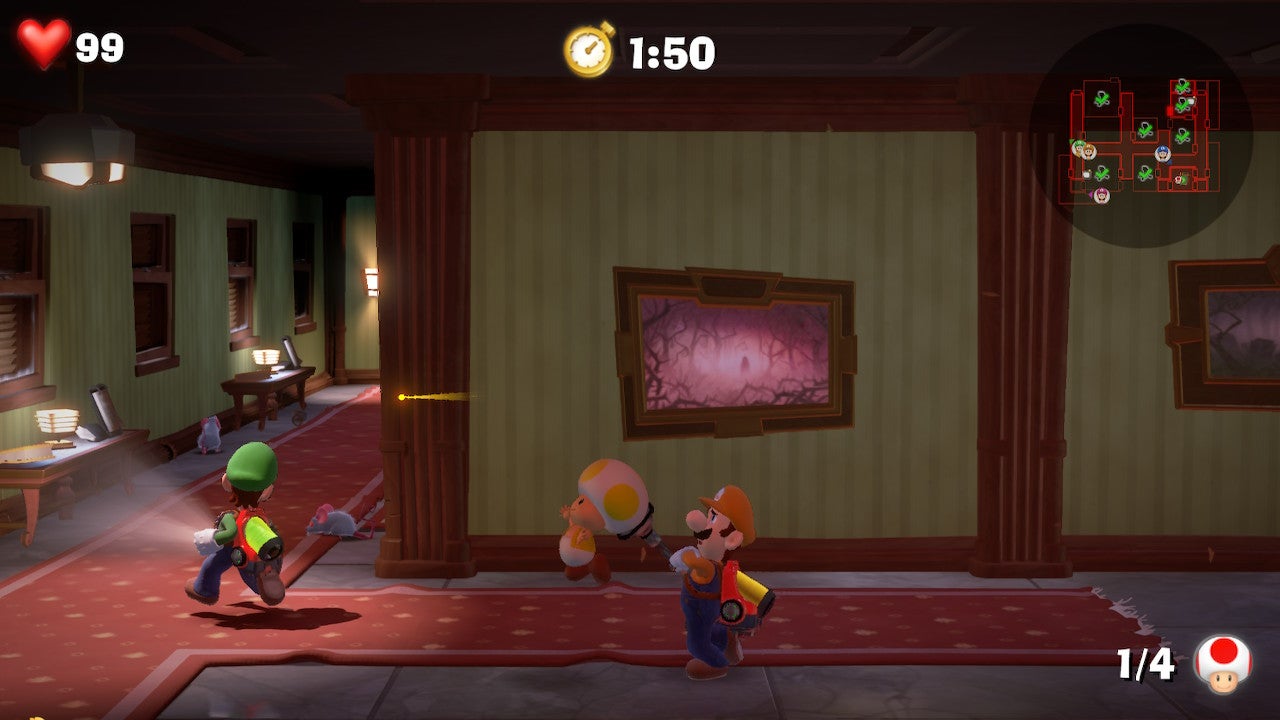 While the Poltergust is built for inhaling the residual spirits of the dead, you’ll spend just as much time sucking up cold, hard cash. I don’t know what criminal enterprise these people were running, but every nook and cranny of this place is stuffed with coins, gold bars, and stacks of greenbacks. Inhaling piles of money and watching your wallet expand is always a joy, although a little bit less so once you realise there’s not a whole lot to spend it on.

I was hoping for an upgrade system where I could spend money to do more damage to ghosts or take less damage from them, or unlock new areas with cash, or something along those lines. Instead, you can spend your money on just three things: an item that will revive you once if you run out of health, and two items that let you find the game’s two optional sets of collectibles: hidden Boo ghosts and gems.

So you don’t strictly need any of the things you can buy, then, although the Boos and gems can be rather tricky to find on one’s own. I collected every cent I could find just for fun, but it was deflating to find that they weren’t worth that much.

Luigi’s Mansion 3 is not a short game, especially compared to the 3-5 hour length of the original. The time on my game clock when I was done was a solid 17 hours, 40 minutes. That includes some hunting for optional gems, but not much time spent chasing after Boos, and I’m sure I could get another 5 hours out of it if I wanted to cleanse the entire hotel of its secrets.

Should you desire more multiplayer than the co-op campaign, Luigi’s Mansion 3 has you covered there as well. The “Scarescraper” mode, which can be played either online or via local, multi-Switch play, lets an army of four Luigis take on a series of randomised floors. The goal of each floor could be to capture every ghost, or find all the Toads, or collect a certain amount of cash You can all immediately split up and tackle individual rooms, although you’ll have to come together and cooperate at certain points, like to get through certain doors or if one of you is caught in a trap. 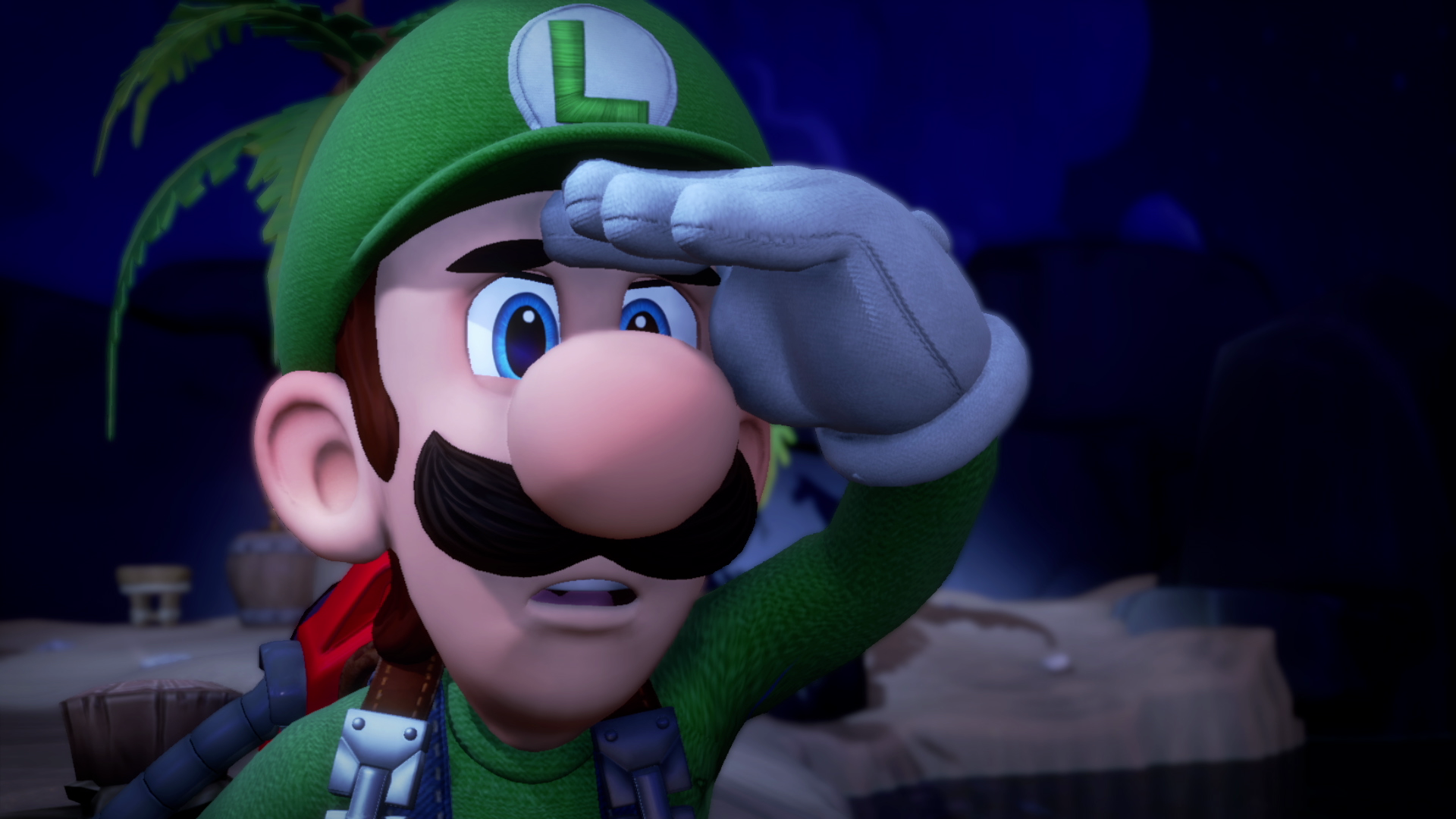 A scintillating follow-up to Hotel Mario.

Puzzles and boss fights can be abstruse, secret-finding doesn't change the game much.

Finished single-player game (about 17.5 hours), played some of each multiplayer mode.

You can press the D-pad to communicate basic phrases like “Over here” or “Help,” although you could also use the Switch’s mobile app to do voice chat. (I loaded up the app to verify that it appeared, but didn’t end up using it.) There are also power-up items scattered liberally around the maps that give you the option to see hidden stuff, flash an entire room full of ghosts at once, et cetera. This, coupled with the strict timer on every floor, makes Scarescraper a more frantic experience.

Finally, there are three mini-games that can be played by up to eight players on a single Switch. These are fairly simple, short, single-round, team-based games that are quite fun but unlikely to be played more than a few times each. (If I’m wrong and a Luigi’s Mansion 3 esports scene develops, I will issue a heartfelt apology.)

It’s the sheer variety of experiences in Luigi’s Mansion 3 that keeps it entertaining throughout. While you might at first think you’re in for a repetitive time as you go through the first few floors and find nothing but standard hotel rooms, things get quite unexpected as you continue higher and higher. While it doesn’t reinvent the wheel, it’s a solid take on a series that hasn’t had many entries over the last nearly 20 years. Mostly, it’s just nice to see that Luigi is indeed alive, and not dead.