After somehow avoiding it for over two years, I finally got the chance this week to sit down with the second edition of Fantasy Flight’s Mansions of Madness, easily my favourite of their line of Lovecraftian games. The big difference between this version and the first is that it gets rid of the role of the “Keeper” (basically a dungeon master) and replaces it with an app.

The heart of the game, being a second edition and not a full-blown sequel or remake, is the same as the first version of Mansions of Madness. If you’ve played it you can skip a few paragraphs down, but if you haven’t, the game involves you and some pals taking on the roles of old-timey Lovecraftian types, banding together to try and survive a scenario taking place in a dangerous supernatural location, sometimes an actual haunted mansion like the name suggested, other times somewhere out in the open.

It’s a D&D Lite kind of adventure that has a lot in common with other Fantasy Flight games like Imperial Assault, Descent and especially 2019’s Journeys In Middle Earth (more on that later). Players move around a map performing actions and fighting enemies by rolling dice, and everyone is encouraged to work together on tactics like swapping items and ganging up on certain challenges.

In the game’s first edition, though, one player would perform the role of The Keeper, and was responsible for controlling the forces of darkness while everyone else played the hero. While I’m sure some arseholes had fun with this job, I never liked it (here or in Descent and Imperial Assault, which have undergone similar app-driven changes), because the physical presence of the enemy at the same table was always a bit menacing, and put a lid on attempts to get truly collaborative since the person responsible for stopping your plans is sitting right there.

Which brings us to the app. It now plays as The Keeper, streamlining the entire experience. Just like it does in Fantasy Flight’s other app-driven games, it handles a number of duties, like:

Map Generation – Probably the coolest feature of the app is that where games used to start out with the entire map revealed and in front of you, you now only start with a small part visible, and have to explore to reveal more of the map (pictured above). As you do, the app tells you which terrain tiles to add where, which really makes you feel like you’re exploring a place instead of just trudging through it.

Enemy Management – Probably the worst feature of the app is that it’s responsible for generating and keeping track of enemies. More on this in a minute.

Puzzles – Also great, sometimes the game will give you a puzzle to solve, like cracking the combination for a safe that you don’t have all the numbers for. Instead of just asking you to roll dice to overcome this, the app will literally present the puzzle to you, video game-style, and have you solve it on the screen, totally apart from the tabletop experience.

What’s funny is that this game is from 2016, but the app is almost identical to that found in 2019’s Journeys in Middle Earth. Which has totally changed my thoughts on not just The Lord Of The Rings’ game’s use of that app, but of the whole game itself, since it’s so similar to Mansions of Madness Second Edition, only not as dense or as interesting. 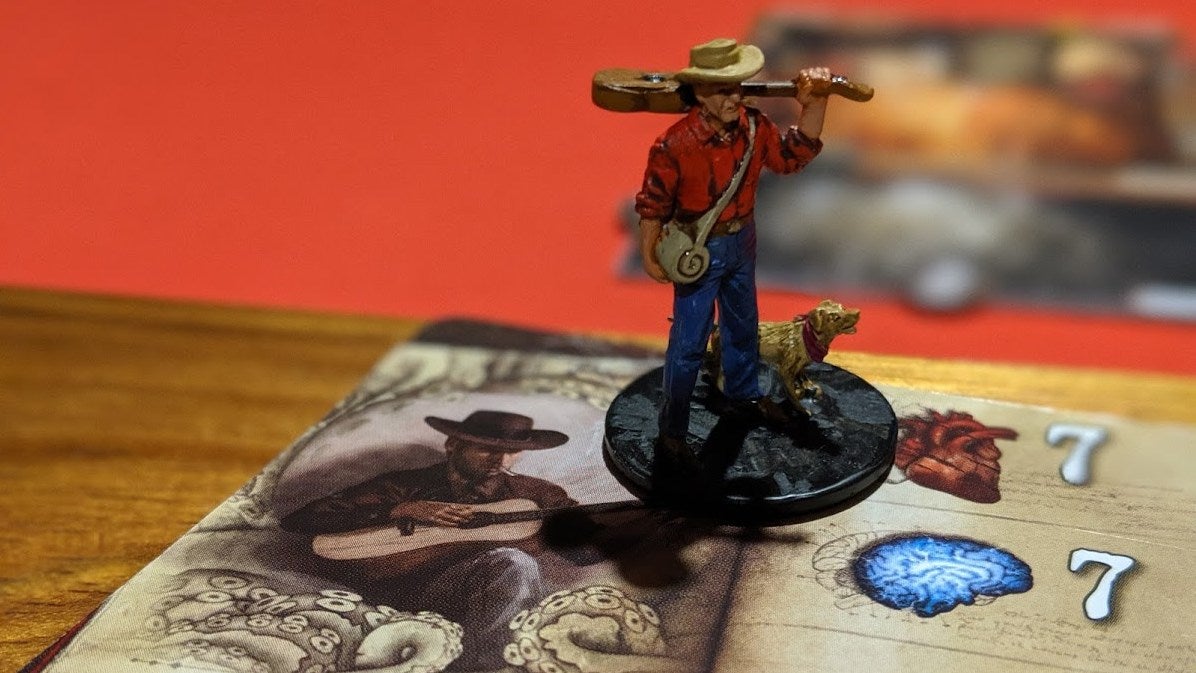 Let me tell you about my game, to give you an idea of how all of this comes together. Me and my pals arrived at a small seaside town full of creepy locals, trying to solve a crime. After poking around for a few minutes in the hotel we were staying in, it became very clear that playing detective wasn’t our biggest concern; it was the insane cultists who were now after us, forming into mobs that were rioting outside the hotel entrance.

As members of this riot crashed through the front door and hurled flaming torches through windows, setting the hotel alight — fire spreads every turn in Mansions of Madness — we found ourselves having to divert our attention between tracking down clues, finding a way to escape this insane town and fighting anything that got too close to us.

It was a lot to juggle, and it was hard. After spotting a boat in the harbour, we found a radio and called its captain, eventually talking him into picking us up at the docks and getting us the hell out of there. Only there was a catch: he was there for a reason, tasked to pick up a pair of FBI agents who had been investigating the same crime we were. We had to bring them along too, or he wouldn’t pick us up.

One of those agents unsurprisingly turns up dead, but we had to scramble to find the other, who was hiding somewhere nearby. Picking up enough clues along the way to solve the original case, we somehow dragged ourselves out of the burning hotel, headed for the docks, found the agent hiding along the way, prepared to signal the boat to come pick us up and then… one of our party was killed by a Lovecraftian fishman who had crawled out from the depths right in front of us. 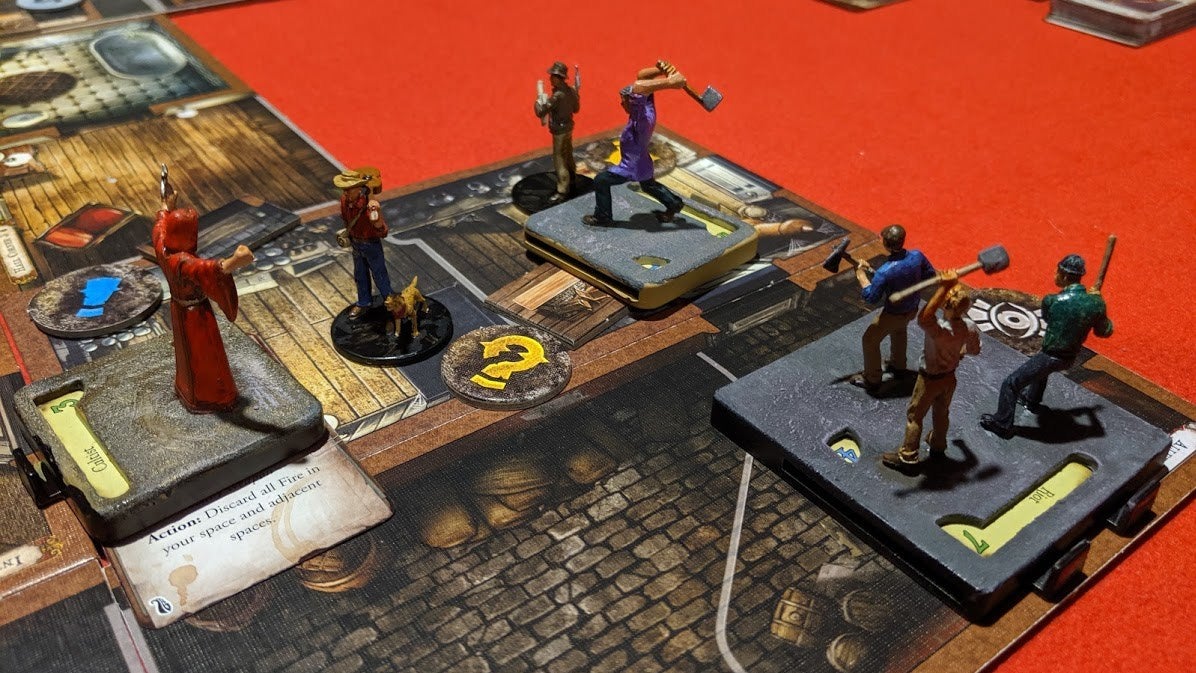 It sucked, but only for the briefest of moments. Overall, it had been a triumph of cooperative play! By getting rid of The Keeper, we could spend our time endlessly hatching plans down to the most minute detail, and the game’s turn/action system, coupled with item trading, meant we always had a lot of ingredients for that plotting.

It wasn’t the game’s fault we failed, or cruel change, we simply blew it with bad plans and even worse execution. Which we were able to confirm through the app, which let us click through it even after we’d died, checking out the rooms we never explored and the paths we never chose.

Indeed the app indirectly sealed our fate by keeping so much of the map hidden from us; had the whole area been laid out in front of us like in the First Edition we’d have probably figured “oh that room, we should definitely look in there”, but in this playthrough we didn’t even know there was a room there, just a black void.

I can’t speak authoritatively on other differences between the First and Second Editions, because it’s been years since I’ve played the former. One thing I know though is that because we had both copies, we could add a lot of the miniatures and locations to the game, giving the app more choices when generating levels.

For all of its praises that I’ve sung, the app is far from perfect, and having now played both this and Lord of the Rings its shortfalls are becoming perhaps a bit more noticeable. It gets too involved in some areas and not enough in others, seemingly unsure whether to completely run the game or step back and let you have at it. Combat is made slower and more laborious than simply doing things the old fashioned way, for example, and it’s laborious to have someone be constantly reaching over the table to input hits and select enemies when simply dropping damage tokens on bad guys was so much quicker and easier.

That’s a minor inconvenience, though. For the most part this was a blast to play with friends, a challenging co-op adventure dripping with Lovecraftian dread.