Nintendo's New Exercise Adventure Game Is Ingenious, Even If It Makes Me Look Ridiculous

Stephen Totilo
Oct 18, 2019, 10:00am
Share Tweet
A battle Ring Fit Adventure. The game doesn’t use a camera. We added the picture-in-picture to illustrate how it works.

Ring Fit Adventure is a hybrid of a workout routine and a stat- and story-driven video game in which you attack your enemies with exercise. You team up with a talking ring to save the world from evil monsters, some of which are shaped like dumbbells, and you’re going to sweat, at least a little, to save the day.

The surprisingly enjoyable Nintendo creation is no gym replacement, but it’s a fascinating experiment that will likely impact users differently depending on their level of fitness. It’s more of a traditional video game than Nintendo’s blockbuster 2008 exercise game Wii Fit. There’s a world map! There’s levelling up! There’s a story! It’s smartly designed with trademark Nintendo ingenuity, while still limited in the way even the best-intentioned home exercise offerings tend to be.

That enables the game to challenge you to squeeze the ring overhead to work your deltoids, for example, and to detect if you’ve squeezed, how hard you squeezed, if you’re holding that squeeze and how fast you’re releasing it. The sensors can keep track of your hands during a squat or the tilt of your body as you do a yoga pose while holding the ring. The sensor in the Joy-Con on your leg tracks tilt, which can detect the depth of a squat or your pace as you run in place. It can also track the angle of your thigh and therefore some of the quality of your form as you lay on the floor, ring set aside, doing leg lifts.

The sensors are limited in what they can detect and the exercises they can orchestrate, which makes the game as prone to cheating as any other exercise gear unaccompanied by a well-compensated personal trainer. The game does try to simulate one, at least with animated experts demonstrating good technique and a lot of voicework urging the same. The game’s verbal prompting, not the Joy-Cons’ sensors, is what’ll keep your back straight or your shoulders down or your knees bent as you attempt good form in a given exercise.

More significantly, the game’s structure — its video-gameness, for lack of a better way of putting it — is its prime motivational tool. Workouts are integrated into a lengthy adventure, which is broken into levels that each involve about a dozen minutes of exercise.

Playing those levels involves a mix of running in place, which makes your in-game character run through an obstacle course or outdoor pathway toward a goal, squeezing the ring to shoot bursts of air at destructible boxes and pulling it outward to vacuum coins. (You can switch to a quiet mode that replaces running with knee bends, if you have downstairs neighbours who are sensitive to noise.)

Ring Fit Adventure comes with a leg strap and a tension ring which combine with the Switch’s Joy-Con controllers to track the user’s workout movements.

As you jog through a level, you encounter enemies who pull you into turn-based battles in which you choose specific exercises to use for attacks, drink attack-boosting or health-buffing smoothie power-ups to keep yourself alive and accrue experience points to level up and unlock new exercises. These battles are the part of the game that provide the most rigorous exercise and are engagingly presented as strategic combat in which you’re picking the right exercises to do the most damage.

Proper form helps. If you don’t squat deeply enough or don’t engage your core long enough during a leg lift, you’ll do less damage. This is very much subject to what the sensors can detect and makes the game prone to cheating.

Regardless, clearing a level means narrative progress and the accrual of experience points which will level you up to increase your attack and defence stats. 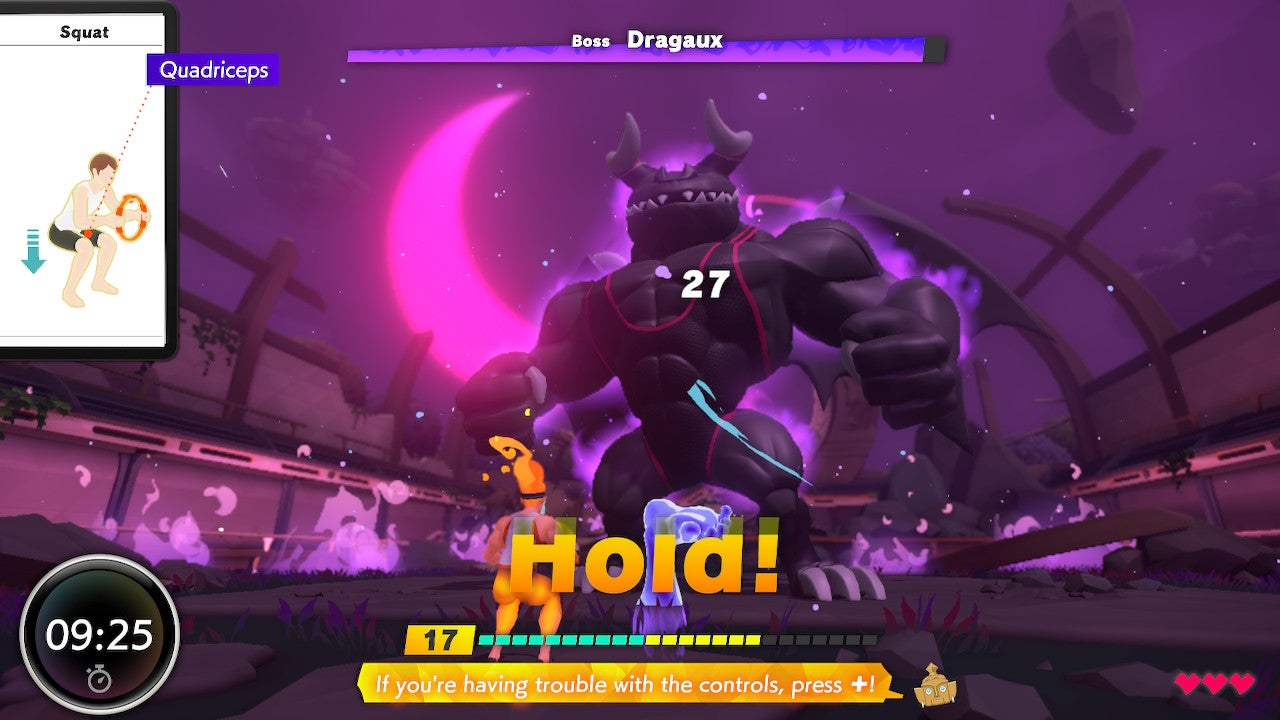 No pain, no XP gain.

Novel idea, takes seconds to set up for a workout, exercise-driven battles actually made me want to work out my core

The jogging between battles doesn't accomplish much, the Switch's sensors can't track your form enough to prevent bad habits

The more you play, the more you unlock new exercises and strategic possibilities. The game is actually motivating its player to target certain muscle groups from workout to workout, but it so effectively works this into the mental process of strategic turn-based combat that I was barely conscious of that as I played.

For example, I’m not a person who normally wants to do stomach exercises, but then I played deep enough into Ring Fit Adventure to unlock the ability to target colour-coded enemies with colour-coded attacks. Suddenly I was looking forward to clearing out yellow enemies with some solid core work. I was eager to get on the floor and do some leg lifts, because I knew they’d do added damage. I wanted to exploit weaknesses and clear the fight.

The middle guy is weak to yoga. His buddies take extra damage if you do ab exercises.

In tougher battles, I’ve been motivated to pick exercises that don’t just target colour-coded weaknesses but focus on one enemy or target a group. I’ve also started to use boosts, which can give, say, leg-based exercises more potency for a few turns.

To really get into Ring Fit Adventure, you don’t just need the game, though. You also need the power to not care how ridiculous you will look playing this game. After all, you play a lot of this game by running in place while squeezing a plastic ring. This is not something that will make you look cool.

Play it alone or with understanding spectators and you’re fine. Will you get buff? I’m not sure how effective the workouts in the game can be, if they can significantly sculpt your body rather than simply motivate you to enjoy feeling some burn and getting active each day. I’ve played the game for 10 days, raising the game’s workout difficulty a couple of notches a few days ago.

I’ve played more to proceed through the game world than to really knock myself out, and so I’ve generally gotten a light sweat and a little muscle burn from each workout, but, other than when we shot some clips of me playing under hot studio lights, nothing really wiped me out. The moments in each workout when I would run in place to propel my character through a level elevated my pulse a little, but they provided little more labour than a brisk walk. The exercise combat was where I’d find any burn.

A person’s fitness level will play a big factor in this. I’ve got a small paunch of a belly and I don’t lift weights, but I do run three times a week, about 40 minutes per run. A couple of minutes of cardio in this game is a breeze for me, but I could certainly use more work on my core, which I’m at least grateful for the game to motivate me to do. It’s one reason I plan to play more and could be one of many fitness goals that Ring Fit could help a player pursue.

These were all the exercises I did in a failed attempt to beat one of the game’s world bosses. He had a sliver of health remaining.

The other reason I plan to keep playing Ring Fit Adventure is because I’m a sucker for novel game design. This thing is like no game I’ve experienced before, and I badly want to see how it plays out. What happens when Nintendo’s designers marry exercise to action-adventure video game mechanics? Where does a game like this go?

The game starts with a silly narrative set-up. You’re a man or woman who finds a talking ring. You’ team up with it to, at least initially, fight a buff dragon who is terrorising the world. The ring acts mostly as a personal trainer, motivating you through your exercises and making this the most voice-acted game Nintendo has ever put out, for better or worse. Sample line: “Your sweat is so shiny and beautiful!” Uh, thanks, game.

As you work out, you’re working your way through an in-game map that even includes a town with a shop that sells new outfits and smoothie-based power-ups. Each level has a little story behind it. You’re rescuing a character or helping them find something or fighting the big dragon again.

The one town I’ve found so far is very basic. There’s a shop staffed by side characters who are selling smoothies and stat-altering outfits. After I cleared one level, I unlocked a new power for my ring and can now combine ingredients I discover into new smoothies.

I want to see more and more of this kind of thing, but I can’t rush it. You can’t binge-play a game like this, not without passing out or cheating at the exercises. I’m happier to just play it naturally and marvel at what the game might show me next. I’ve been amused, for example, to see how exercises are used to trigger some simple things. My favourite, so far, is opening a treasure chest with a trio of squats.

Where will the story go? How many other outfits can I unlock? Which power-ups must I collect to help me conquer another boss battle? I want to keep playing to find out. That’s a win for the game and for my health, because it means I want to keep exercising.

The cleverness of Nintendo’s design extends beyond the main exercise adventure. A “multi-task” mode tracks squeezes and pulls of the ring while your Nintendo Switch system is in sleep mode, the idea being that you could use the ring for arm workouts while talking to someone on the phone or watching TV. Any exercise you do that way provides a boost the next time you play the game. Nintendo’s designers also utilise the right Joy-Con controller’s infrared sensor to track your pulse after a workout, which, just, wow, that’s really clever, Nintendo.

Ring Fit Adventure is no replacement for just going to the gym or taking up swimming or otherwise thoroughly committing to exercise. It is, at least, simple to set up, entertaining to play and therefore easy to keep using. It’s Nintendo being weird, which, for some of us, is a draw unto itself. Maybe this isn’t the game you were hoping Nintendo would make next, but it’s the kind of experiment I’m glad the company sometimes tries. And it’s fun, even, miraculously, when it’s asking me to exercise my abs.