Oh, So That’s How Star Wars Resistance Links To The Last Jedi

Leave it to Star Wars to make you wait.

Last week’s premiere of Star Wars Resistance picked up right where things left off at the end of season one, but didn’t answer the show’s biggest lingering question. No, we had to wait until this week’s second episode, “A Quick Salvage Run,” to find out if Resistance was going to tie-in with The Last Jedi, and boy did it ever.

Star Wars Resistance season one ended with Kaz and the Colossus escaping Castilon and racing off to D’Qar, home of a secret Resistance base, in hopes of meeting up and joining the fight. However, we knew from seeing Star Wars: The Last Jedi that the Resistance had to flee D’Qar and left nothing but a busted First Order Dreadnought in its wake.

So as Finn, Poe, Leia and the rest of the Resistance are off being chased by General Hux and the First Order, under the watchful eye of Rian Johnson, over on Disney XD the Colossus has shown up right behind them, missing the battle but seeing the aftermath.

No one is left on D’Qar, but there is that Dreadnought Poe and the Resistance destroyed and, with it, hopefully, some supplies to help the Colossus on their journey. So Kaz and the Colossus crew go inside the destroyed Dreadnought, showing The Last Jedi story from a whole new perspective.

Short of a live-action version of an animated character showing up in one of the big-screen films, this was Star Wars animation at its most exciting. An episode that touched right up against the movies, to the point where everything is perfectly lined up storywise. Consider the planning that takes.

The number of people who have to weigh in on a story, approve it, come up with the idea to link it up, make sure they look the same, make sure one isn’t screwing up the other, etc. It’s impressive, to say the least. “Most impressive,” even. So we wanted to talk to the people who behind it all about it.

“We always ask [the Lucasfilm Story Group] questions about continuity,” executive producer Athena Portillo told Kotaku when asked about the crossover. “Questions about like ‘Can we have an opportunity to read the script?’ ‘No, you can’t read the whole script.’ ‘Well, can we read a certain sequence of the script? ‘Can you show us something?’ I mean sometimes we have to go to their offices to see what it is that we’re trying to tie in.”

In addition to setting most of the episode in the remains of The Last Jedi, another, even more recent Star Wars movie gets referenced in this episode too. The item Kaz and his friends search for on the dreadnought is coaxium, the powerful substance central to the plot of Solo: A Star Wars Story (and Smuggler’s Run in Galaxy’s Edge.)

“We got to see the design for the coaxial before Solo came out and we got to have a deep dive in terms of what that means,” executive producer Brandon Auman added. “It’s a juggling act, right? Trying to figure out how much we can kind of hint or tease or show [and] season two is gonna have a lot of Easter eggs. A lot of really cool things that tie into some of the other movies and I think it’s just bigger and bolder than season one. Like it gets crazy.”

Of course though, as the episode wore on, things got even worse for everyone. Tam ratted Kaz out about his message. The First Order realised where the Colossus was and tracked them down and nearly destroyed them before the coaxium was salvaged and the Colossus was able to escape.

At the end of “A Quick Salvage Run,” we have a very good sense of the dire situation set up in season two of Resistance. The Colossus needs supplies. The First Order is on its tail. The events of The Last Jedi are happening simultaneously and, whether we see it or not, the myth of Luke Skywalker will begin to spread after his heroic victory on Crait. Then there’s the real problem which is the immediate fallout between Tam’s actions with the First Order and Kaz’s time with the Resistance. To get those answers, we again went right to the source. 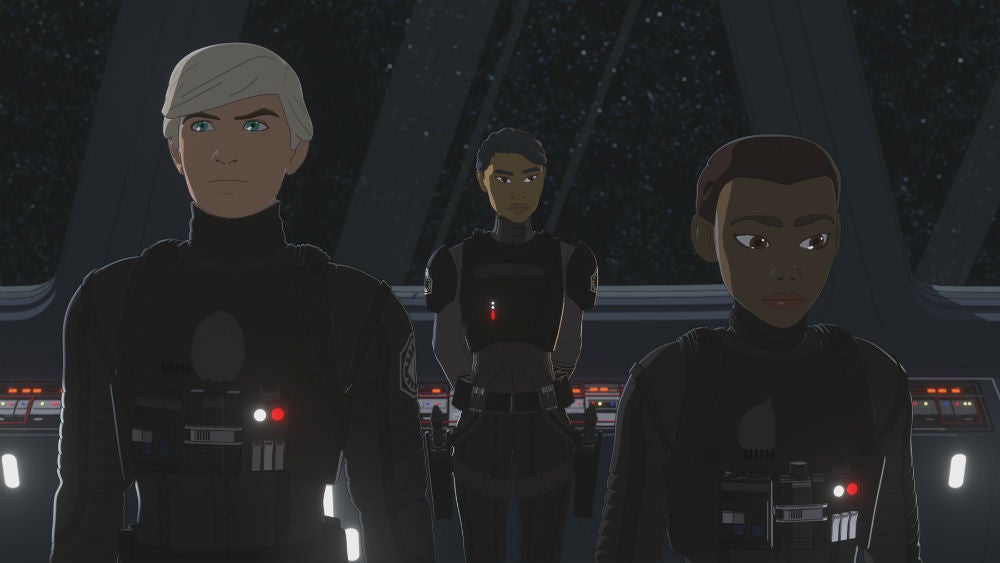 “I think Tam is deeply, deeply hurt,” Suzie McGrath, the voice of Tam, told Kotaku about her character’s actions at the end of this episode. “I think she’s also a little bit scared of what she’s gotten herself into. She’s in completely new surroundings. She’s left her home. She’s left her job. She’s left a father figure and brother figure and a family. So I feel she’s reeling with anger towards them but also kind of missing them a little bit too because they’re family.”

“[Kaz is] questioning whether it happened. Not knowing but questioning,” Christopher Sean, the voice of Kaz, told Kotaku. “The truth is he doesn’t know but the [mindset] is ‘What if?’ And that’s really the biggest teaser. There’s a wonderful thing that [the writers] have done in drawing a definitive line in both characters and in both of their stories. So it’s really amazing to watch the season unfold, to watch both character choices and to see the development of Kaz.”