After the events of The Last Jedi, Star Wars’ latest hotshot pilot hero Poe Dameron has been knocked all the way back on his arse — not just by the First Order’s shattering of the Resistance fleet, but by harsh lessons learned about his own pride. But now that the Resistance needs allies old and new, has Poe really taken his misjudgement to heart?

You can find out in our new look inside Rebecca Roanhorse’s Resistance Reborn — the upcoming novel that tells the tale of what Leia and her remaining allies are up to between The Last Jedi and The Rise of Skywalker.

Published by Del Rey and picking up immediately as Last Jedi ends, Resistance Reborn sees Leia, Rose, Rey, Finn and Poe fan out across the galaxy in search of the allies the Resistance desperately needs after the losses they suffered at Crait. 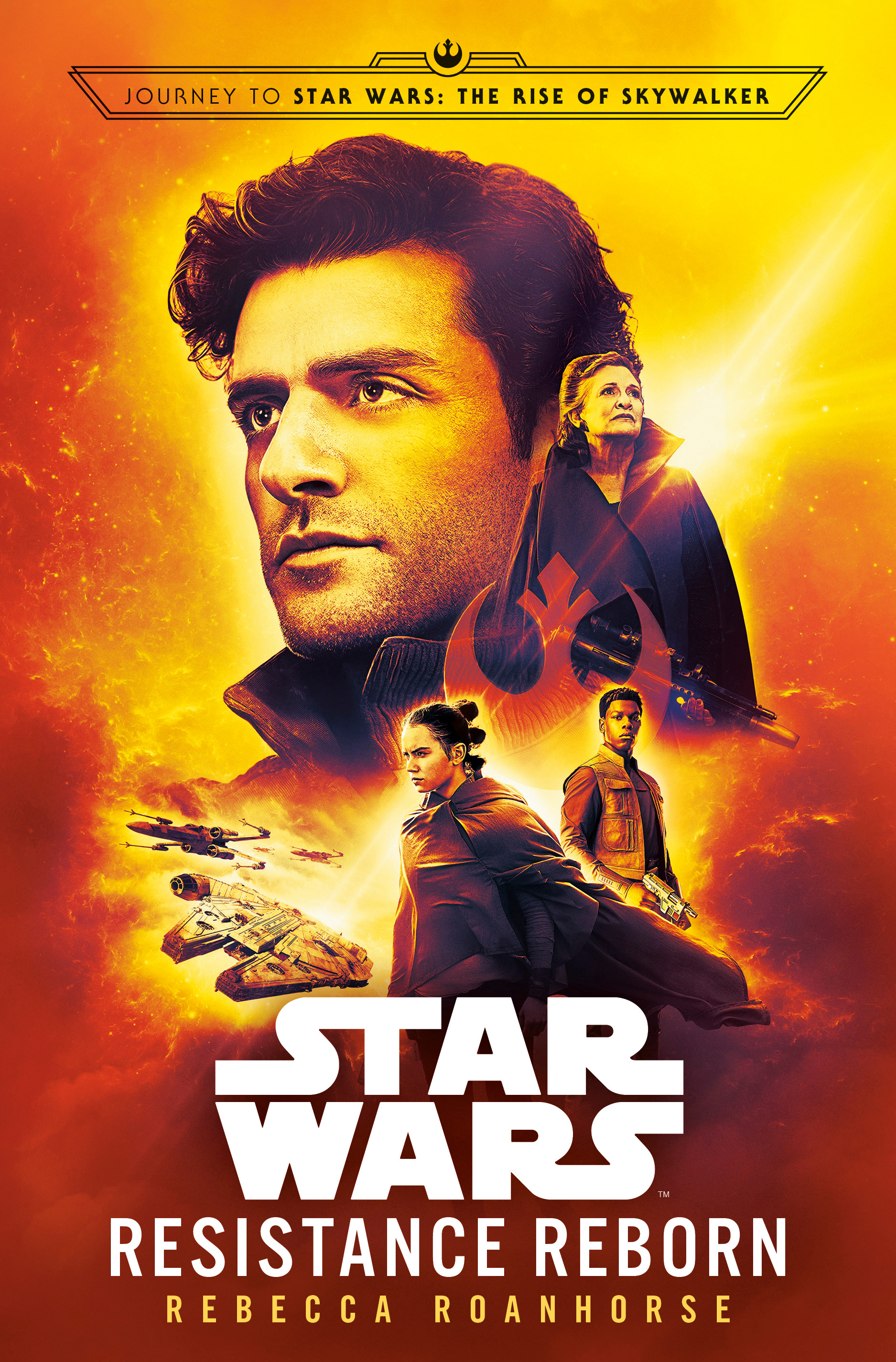 new faces, thrust into the fight against the First Order in light of Luke Skywalker’s legendary sacrifice.

Some, as you’ll find out in our excerpt below, will be faces Star Wars fans are more than familiar with. But old or new, not all of them are going to be so willing to sign up to a new galactic civil war…

Check out Poe’s crisis of confidence as he heads to the planet Ephemera — a former mining colony now being turned into an intergalactic resort world called “Wish” — and tries to recruit one of those familiar faces below.

“I’m not helping you with anything,” Maz Kanata said, adjusting her spec­tacles to get a better look at Poe’s astonished face. “If you recall, last time I stuck my neck out for the Resistance, the First Order destroyed my castle. Do you know how much I loved that castle?”

“It was a great castle,” Poe admitted.

“A thou . . .” She paused, giving Poe a suspicious look. He grinned playfully. “Longer than you’ve been around, flyboy, that’s for sure. So don’t sniff at me like I’m being unreasonable.”

She dipped her hand in the gelatinous goop that filled the bowl next to her and brought back a handful of something pink and smooth that smelled distinctly of sulphur. She leaned out of her re­cliner, offering some to Poe. “You want?”

They were both sitting on long sinuous loungers in one of Wish’s ubiquitous day spas. Poe was still in his uniform, small mercy, but Maz was wrapped in a thick fluffy white towel, a second white towel wrapped tightly around her head. Her bare feet soaked in a mix of muddy chemicals Poe couldn’t identify, and willowy attendants flut­tered in and out of the room, proffering teas and colonics and other concoctions Poe politely refused. Maz was now smearing the sulphur-scented goop she had offered Poe on her broad cheeks and humming merrily.

“What is that stuff?” he asked, sniffing. “It smells terrible.” The sul­fur odor had been replaced with an ammonia one.

“Feline poop. From some species that’s lived here so long that it’s practically native to the planet. Imagine. A planet with no solid ground but plenty of cats. The story is that the founder of Ephemera was a Rothkahar philosopher. He domesticated this species because he thought them of advanced intelligence . . . or maybe they domes­ticated him. I forget. Anyway, later on, he found that their excrement had healing properties. High concentrations of tibanna gas, naturally processed into tuusah.” She laughed again. “Does wonders for the skin.”

“That’s great, Maz,” Poe said, thinking it was not great at all, “but can we get back to the topic at hand? The Resistance needs your help.”

But you didn’t seem to hear me, he thought. He needed to get through to her, and he decided brutal honesty was his best bet. “We need a place to hide and regroup. It needs to be outside of prying First Order eyes but able to handle our needs for housing, supplies, communications . . .”

“Didn’t you say there were only a handful of you left on a single ship? What needs could you have?”

Poe bristled at her callousness. Maybe she had heard him, and she just didn’t care. He hadn’t expected that. “There will be more,” he said hastily. “We’ve got people all over the galaxy, and we’re making new allies all the time. We were hoping you could provide shelter. And more than that. Leadership. Leia can’t do it alone. We need you to help lead the Resistance.”

“Lead the Resistance? I thought that was your job.”

“Expecting me to do your job for you?” she grumbled, now duti­fully applying the cream to her neck. “You’re the commander in the room. Or has that changed?”

“Nothing’s changed,” Poe said automatically, but it was a lie, wasn’t it? After the Raddus, everything had changed.

Maz finished shellacking her throat and sat back in her chair, eyes closed. The last attendant had left a steaming pot of tea on the side table, and Maz blindly reached a hand out, found her cup, and lifted it to her lips to take a sip. She set the teacup down. Poe waited pa­tiently for her to speak, but after a moment he could hear light snor­ing. Had she fallen asleep?

Poe stood up, exasperated. “This was a waste of time. I should go.”

“No!” Her hand closed around his wrist like a vise, all the whimsy fled from her voice as if it had never been there. She cocked one eye open, fixing it on him. He froze.

“Listen closely to me, Poe Dameron,” she said. “You see me like this, and you think me a fool. Good for me, because when an enemy perceives you as foolish or weak, that is when they are most vulner­able in their arrogance. That is when you strike.” She twisted her hand, pulling hard, and his feet flew out from under him. He went down on his back, hard enough that a bellowing breath escaped from his lungs and pain radiated from his tailbone.

Maz was up off her recliner and standing on his chest in seconds. Her eyes, surrounded by the sulfurous skin treatment, were centime­ters from his own. She narrowed her gaze, taking him in. Judging. “I see arrogance in you. And that is what gets you in trouble, causes pain.”

He flushed, still thinking of the Raddus. “I learned my lesson,” he spit through gritted teeth.

“I . . .” Poe collapsed back, resting his head on the floor. He thought about lying, or at least not telling Maz any more than necessary, but she looked at him like she could see right through him, like she al­ready knew the ugly truth.

“You asked me if I was still a leader,” he started, eyes focused on the ceiling. “The truth is that I don’t know. I-I made some mis­takes . . .”

“I led a mutiny,” he confessed. He hadn’t meant to tell her, but there it was. And now that he had begun, he wanted her to know everything. “I didn’t understand what was happening. All I knew was that we were running, when we should have been fighting. I had to do something!”

“Did you? Have to do something?”

He blinked, taken off guard. A moment ago he had wanted to de­fend himself, to make her see reason or at least understand his rea­soning. But suddenly all that fight was gone and reality hit him like a punch to the gut.

“No,” he admitted. “I’m a soldier and she was my commanding officer. All I had to do was trust.” He exhaled, instinctively wanting to sink farther into the floor, to hide from his own dishonor. He looked at her, eyes pleading for . . . not sympathy. Not even understanding. But something else. A second chance.

Maz made a humming sound. She leaned her head away from him and sat back. She didn’t get off his chest, but at least there was some distance between their faces.

“And now what, Poe Dameron?”

“Let’s say you’re right. That your actions, your arrogance, got many people killed. Led the Resistance to where they are now: bro­ken, on the run, destitute, and begging for help.”

He flinched. Opened his mouth to protest her words, but what was there to say besides “I fix it.”

“How will you do that?” she asked. “You can’t bring the dead back. You can’t single-handedly rebuild the Resistance, although—” She snorted, sounding amused. “—if anyone was going to try it would be you.”

“I can bring down the First Order.”

Will Maz Kanata sign up for a new battle after losing so much? Does Poe still have to learn the cost of his arrogance aboard the Raddus? You don’t have to wait much longer to find out: Resistance Reborn hits shelves November 5.