It’s not easy to capture the perfect photo in Super Mario Odyssey’s snapshot mode. Real-life photographer Daniel Cordero knows this all too well, especially when it came to taking a photo of Mario and a rabbit.

The idea for this shot came to Cordero during the six months he spent playing the popular Nintendo Switch game. He’d snapped a lot of images in a lot of the game’s worlds and thought it’d be cool to get a particular shot in the game’s jungle-themed Lost Kingdom.

That area includes a grey rabbit that wears a top hat and stands on a moving platform. Whenever Mario approaches, the rabbit hops away.

Cordero had an idea. He made Mario bump the rabbit and stun it, then moved Mario to a spot nearby as the rabbit recovered. Once the rabbit snapped out of its stupor and started hopping, Cordero made Mario jump.

He framed the shot perfectly. The two characters eclipse the yellow balloon of Mario’s Odyssey airship. The resulting image is suitable for framing.

Cordero has spent a lot time snapping images in Super Mario Odyssey and has, as he explained to Kotaku in an interview, learned a lot about what it takes to be a good Mario world photographer.

Cordero has worked as a professional photographer for the last four years, focusing on weddings and other events in Mexico’s Riviera Maya. He took on photography in Mario Odyssey as a way to sharpen his skills.

Odyssey’s photography mode omits a lot of the technical aspects of photography—aperture, speed, lenses, and the like—but more intangible aspects of the craft like lighting, posing, composition, and patience still come into play. It allowed Cordero to sharpen some of these skills while playing the game, then apply them in the real world. 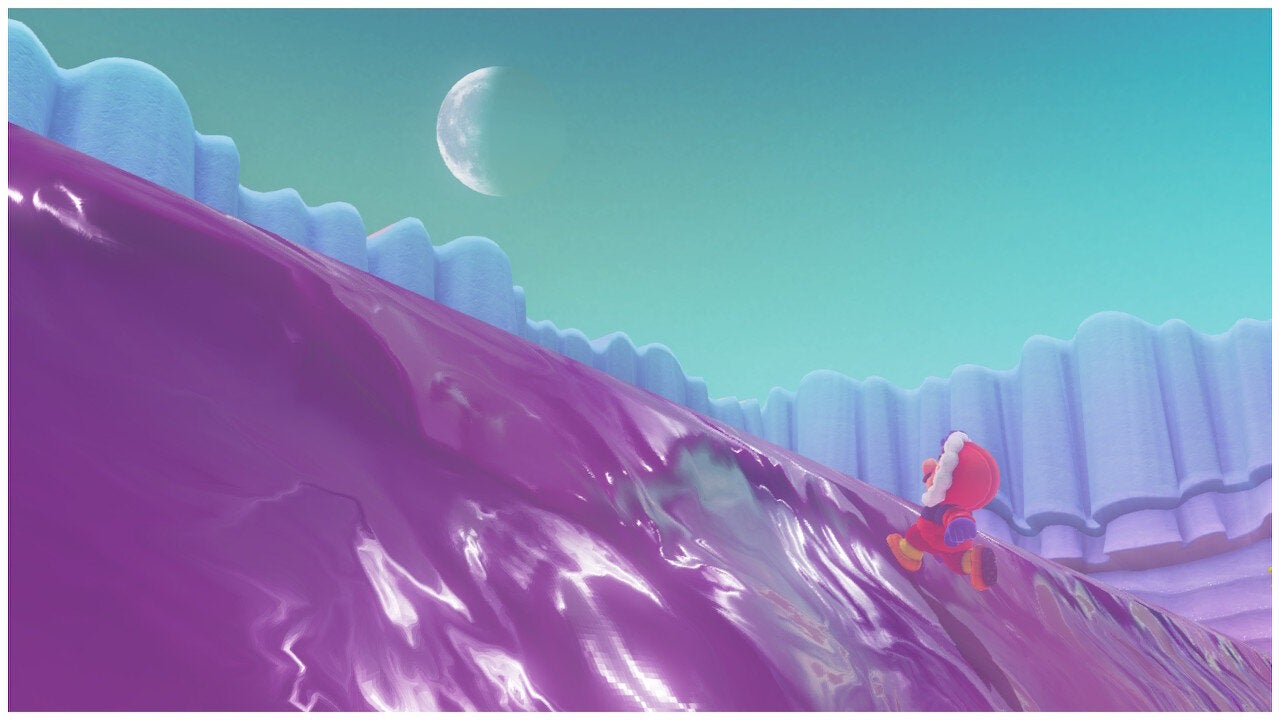 One shot he’s proud of involves Mario appearing to surf a wave of lava. In that image, Mario appears to be walking on the poison waves of the Lake Kingdom, but that’s just a trick of perspective. “This shot was particularly hard even though it seems simple, because the ‘ground’ that Mario is standing on is actually that purple lava thing which makes you instantly lose your life when you touch it,” Cordero explained. “So I had to take the screenshot at the right moment to make it look like Mario is walking on it. It was a lot of trial and error!” 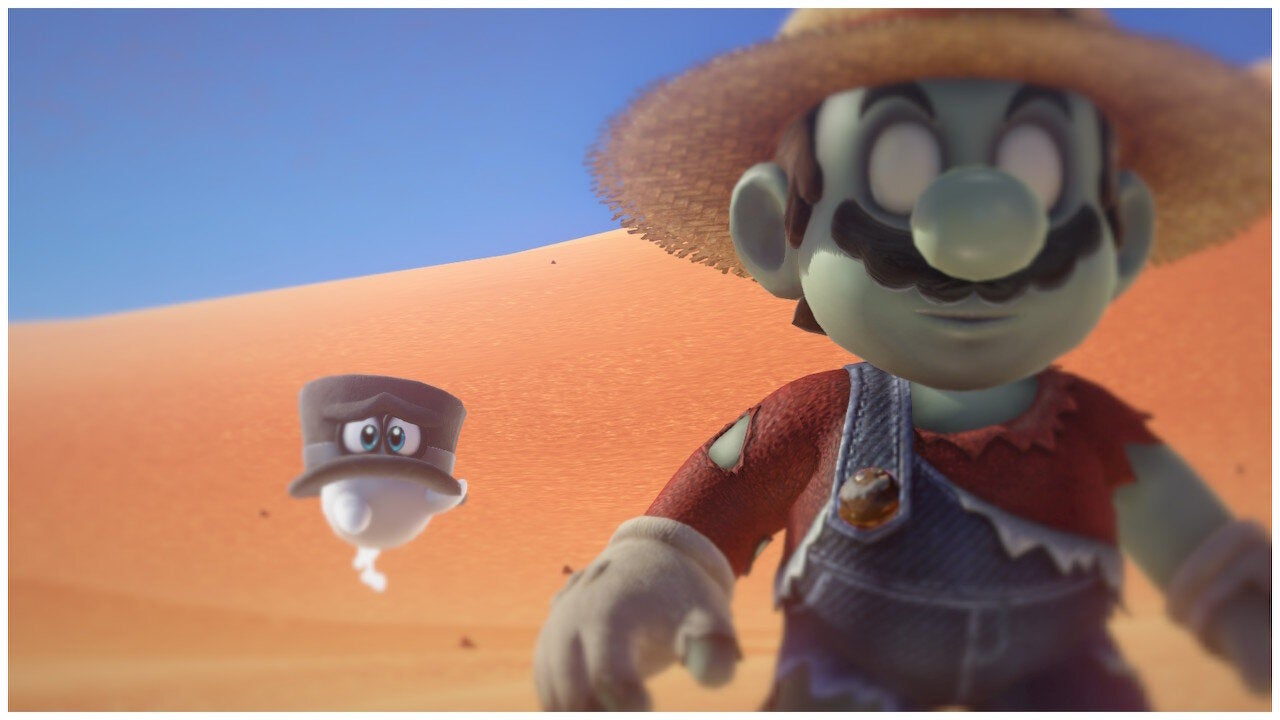 Cordero spent more time taking photos in Super Mario Odyssey than it took him to complete the game due to the meticulous way in which he approaches every shot. This meant scouting out every area at least twice, making note of interesting spots as well as those that could be made interesting by introducing an item or enemy. During this time, he realised that some characters react differently depending on which outfit Mario is wearing. The zombie costume, for instance, evokes looks of worry and fear from other characters, which helped him get a shot of Cappy eyeing Mario in distress from the background.

“It was all a matter of exploring every different approach and trying to find the best angle for it to have a good composition, nice colours, a clean or interesting background and to have as little distractions as possible,” he continued. “This included sometimes collecting all the coins or taking care of all the enemies in an area so they’re not in the background of the shot. And of course, a lot of trial and error with the timing on the poses or jumps to get the perfect shot.” Some of these shots are unconventional and evoke some of the more artsy photos he’s taken of real-world subjects. “I like to think they are a little bit more close to the kind of photography I do in real life, where I’m very influenced by surrealism, juxtaposition of elements, and a sense of mystic wonder or adventure,” Cordero said. “In real life, I have a more precise way of directing the emotion out of the subjects or for them to adopt expressions or actions. In Super Mario Odyssey, I had to do with what I had. Its snapshot mode is incredibly robust, but I still wish I could choose the poses, movements, and expressions of the characters even more.”

It wasn’t just that rabbit in the Lost World that was hard to frame. Other wildlife, like the squirrels in the Mushroom Kingdom and the butterflies in Lost Kingdom, were tricky too. The former are so fast, Cordero found, that a lot of people didn’t even know they were in Super Mario Odyssey. The latter aren’t even 3D models but 2D textures that shift and disappear on a loop. Successfully photographing the butterflies involved finding a group that remained visible longer than the others and figuring out an angle that would capture as many of the insects as possible. From there, it was just a matter of trial and error—a common theme in Cordero’s process—to get the shot he wanted. 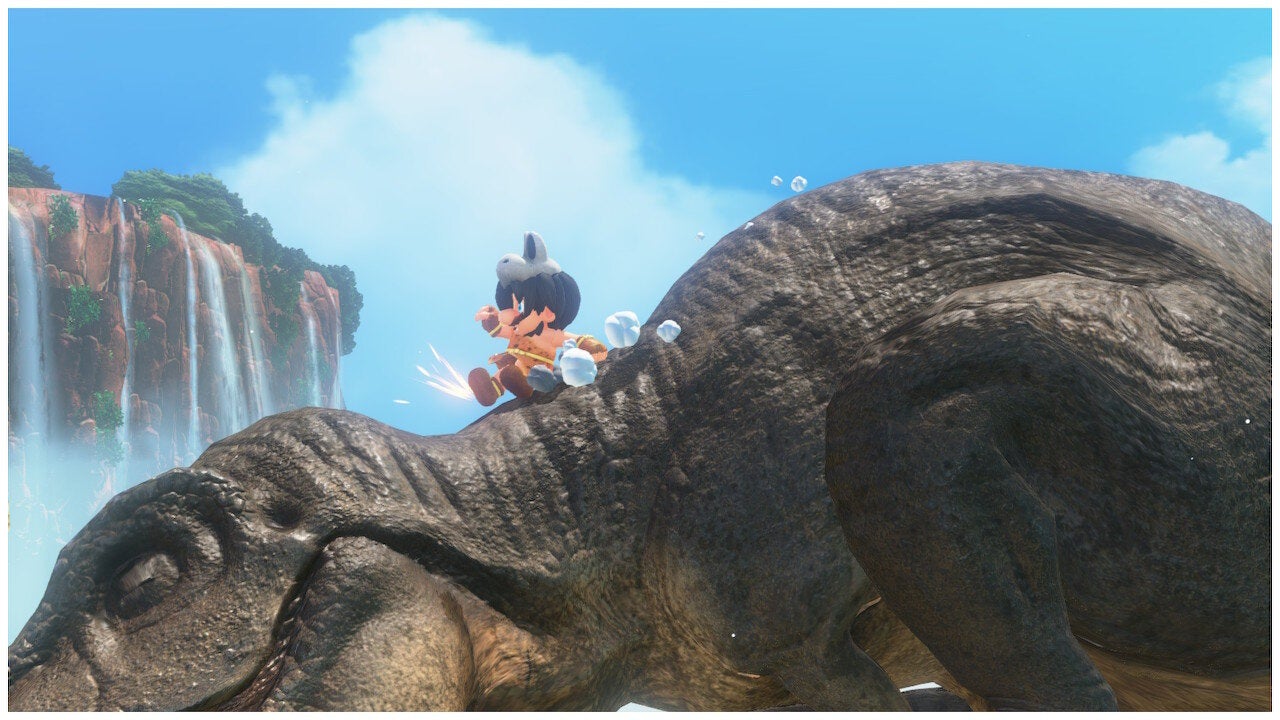 Another particularly striking photo in Cordero’s gallery features Mario casually sliding down the sleeping tyrannosaurus rex of the Cascade Kingdom. Cordero knew he wanted a photo of the iconic dinosaur after playing through Super Mario Odyssey, and he experimented with ways to incorporate it into a shot with Mario. What he ultimately decided on is what you see above, a photo that Cordero is proud of for its composition and the way its subjects contrast with the skyline behind them. The T-Rex also doesn’t have perfect slopes like one would expect from the landscape, so getting Mario to slide down its back meant finding a specific area of its body that would guarantee the action pose and not appear disjointed.

Due to his Mexican heritage, Cordero enjoyed the obvious Latino influences of the Sand Kingdom and spent a lot of time in the main hub of Tostarena Town. It’s where players spend much of their time in the early portions of the game, after all, which made it the perfect place for Cordero to experiment with the snapshot mode. But by travelling elsewhere in search of more environments and subjects, he was able to explore the nooks and crannies of Super Mario Odyssey in a way that even the extensive main campaign doesn’t encourage.

Cordero sees his work with Mario as an example of how new media and technology can open doors for art, advertising, and even teaching. He’s even been approached by a couple who were so impressed by this project that they hired him to photograph their upcoming vacation to Cancún. 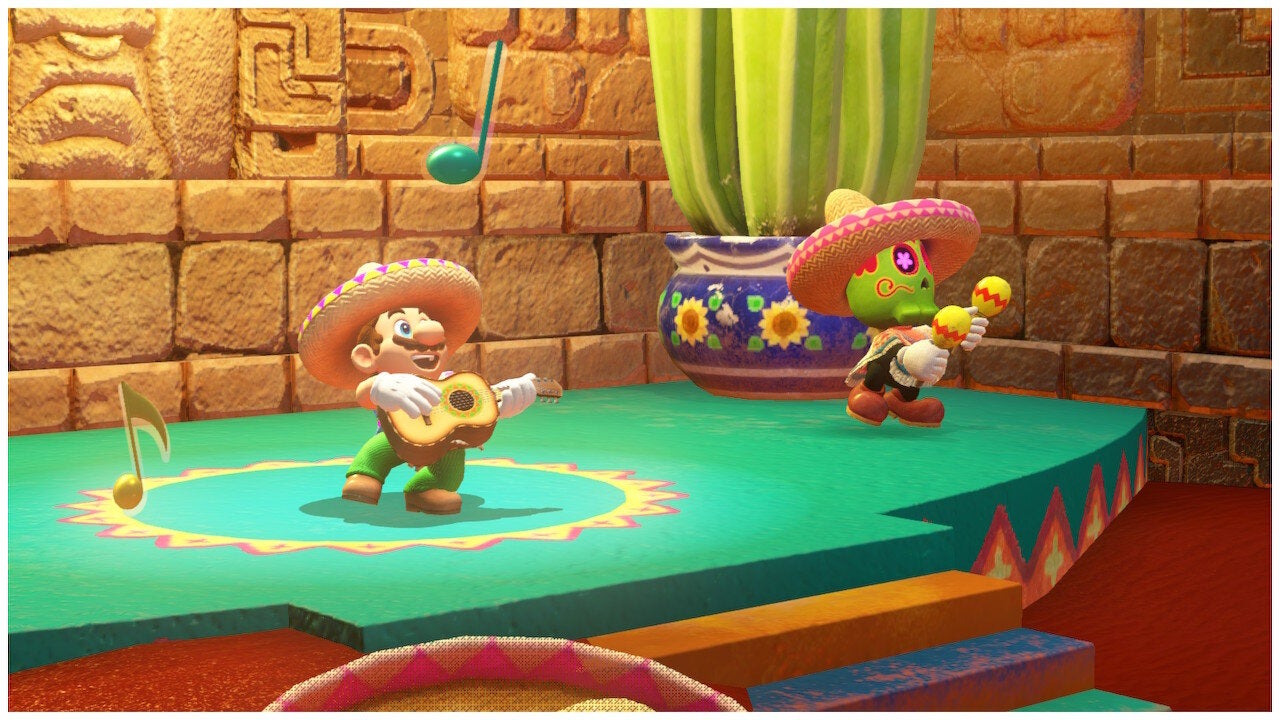 He looks forward to expanding his horizons in the future, perhaps with a similar foray into the world of The Legend of Zelda: Breath of the Wild, although only with a 4K upgrade since he believes its native 900p resolution doesn’t do that game justice. He only owns a Switch at the moment, but he’s also interested in checking out games like Hellblade: Senua’s Sacrifice and Dragon Quest XI, which have in-game photo modes, and The Witness, for which this is a third-party application that functions the same way, if the opportunity arises.

Do yourself a favour and check out the rest of Cordero’s Super Mario Odyssey photos here.