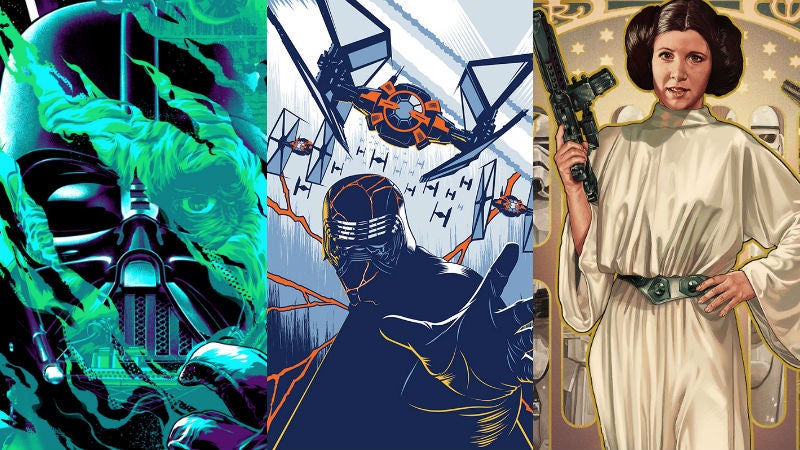 Anthony Petrie, Eric Tan, and Juan Carlos Ruiz Burgos are three artists with <em>Star Wars</em> pieces at NYCC. (Image: All Images, Bottleneck Gallery/Acme Archives)
To sign up for our daily newsletter covering the latest news, features and reviews, head HERE. For a running feed of all our stories, follow us on Twitter HERE. Or you can bookmark the Kotaku Australia homepage to visit whenever you need a news fix.

Friday’s mega release of all the new merchandise for Star Wars: The Rise of Skywalker won’t be limited to retail locations. In fact, it’s happening at New York Comic Con too, as Bottleneck Gallery and Acme Archives will have a brand new, limited edition art print based on the upcoming film.

Oh, and they’ll also have several others based on the other films in the saga, too — and we have the reveal of all of them.

Though New York Comic Con begins Thursday in the U.S., Bottleneck Gallery (located at booth 2160) won’t be able to sell The Rise of Skywalker piece until Force Friday. But here it is nonetheless.

It’s called End of a Saga and it’s by Eric Tan. This piece truly is that, as it completes a trilogy of prints Tan did for the sequel trilogy (he also did similar prints for the original and prequel trilogies). It’s a 30cm x 91cm print in an edition of 300 and costs about $75.

End of a Saga by Eric Tan

For fans of the original trilogy, Bottleneck and Acme will have four new pieces along with some variants. First up is For Luck by Matt Ferguson. Ferguson has a ton of new pieces at NYCC but this is his only Star Wars one, inspired by A New Hope of course. It’s available in three editions. There’s the 90cm x 61cm regular version, in an edition of 300, that costs $75: 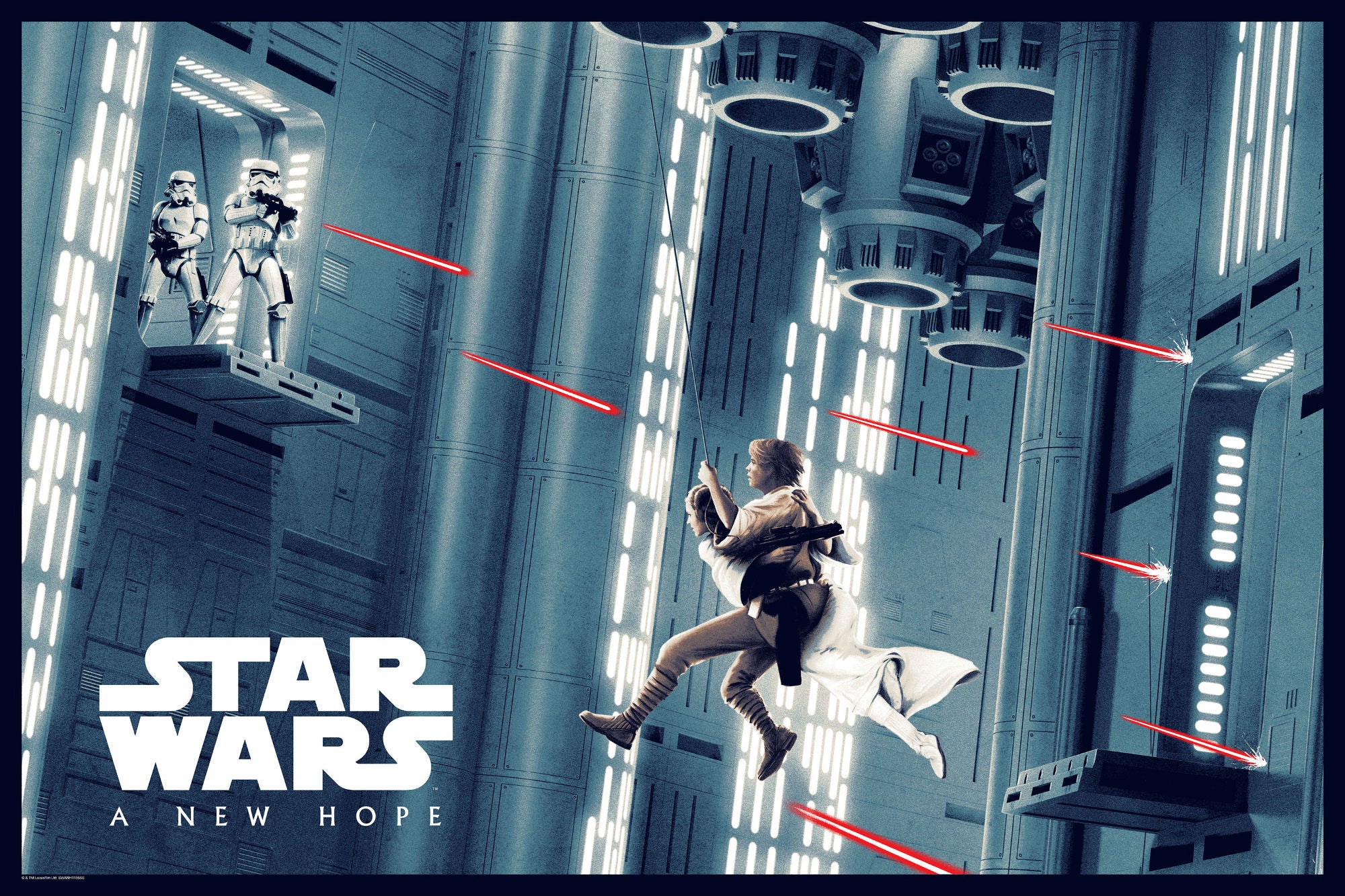 For Luck regular by Matt Ferguson 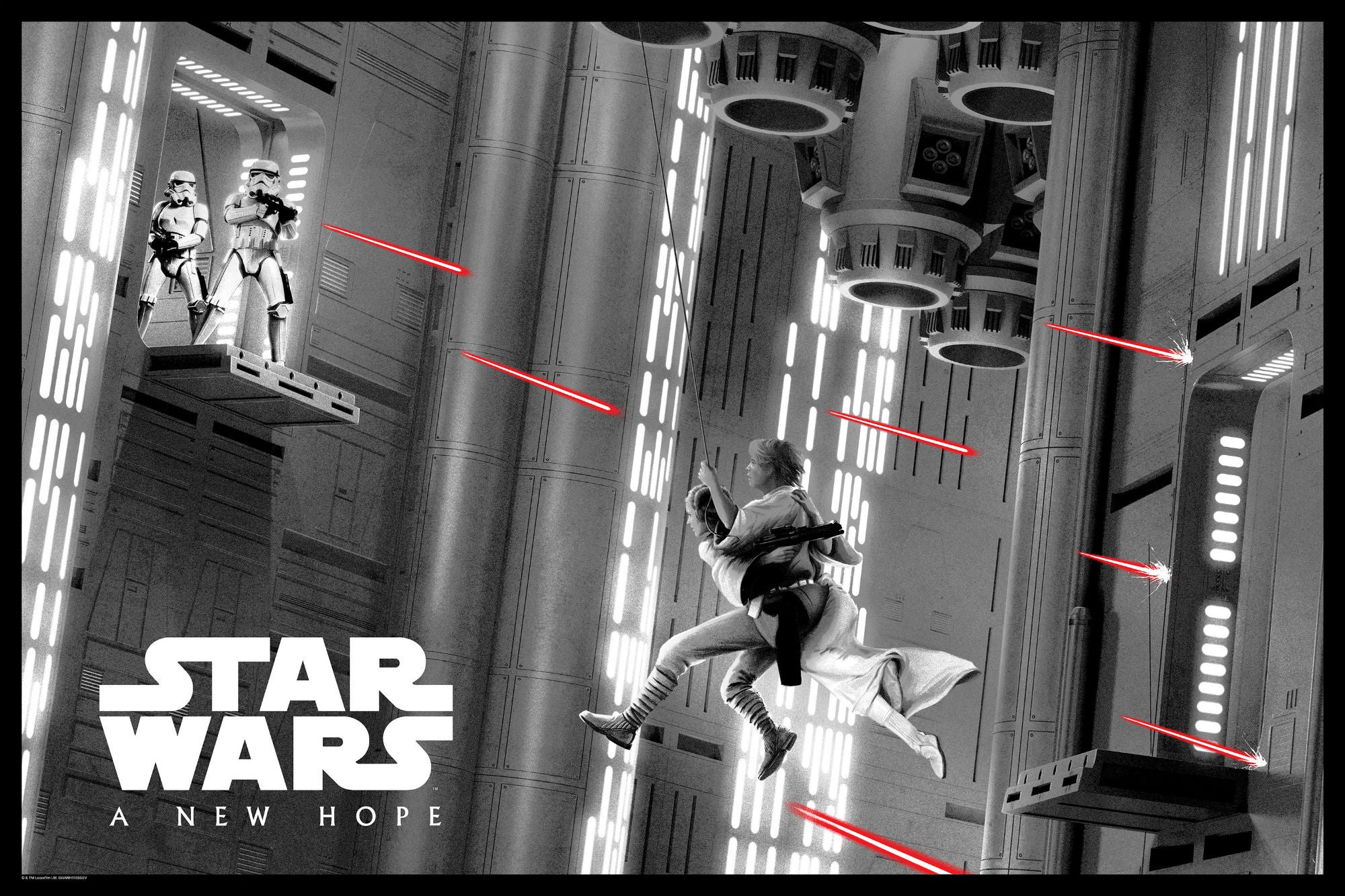 For Luck foil by Matt Ferguson 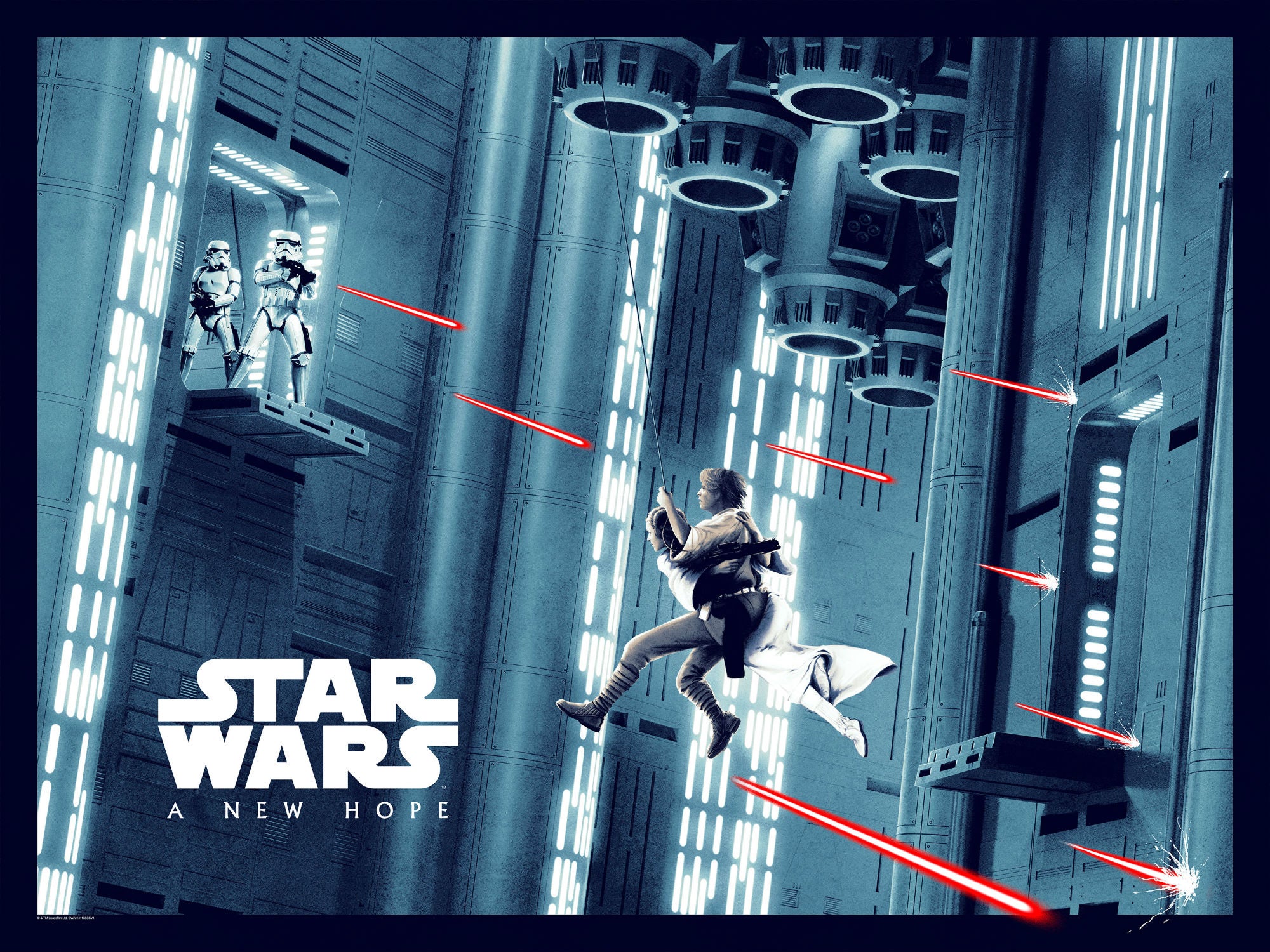 For Luck quad by Matt Ferguson 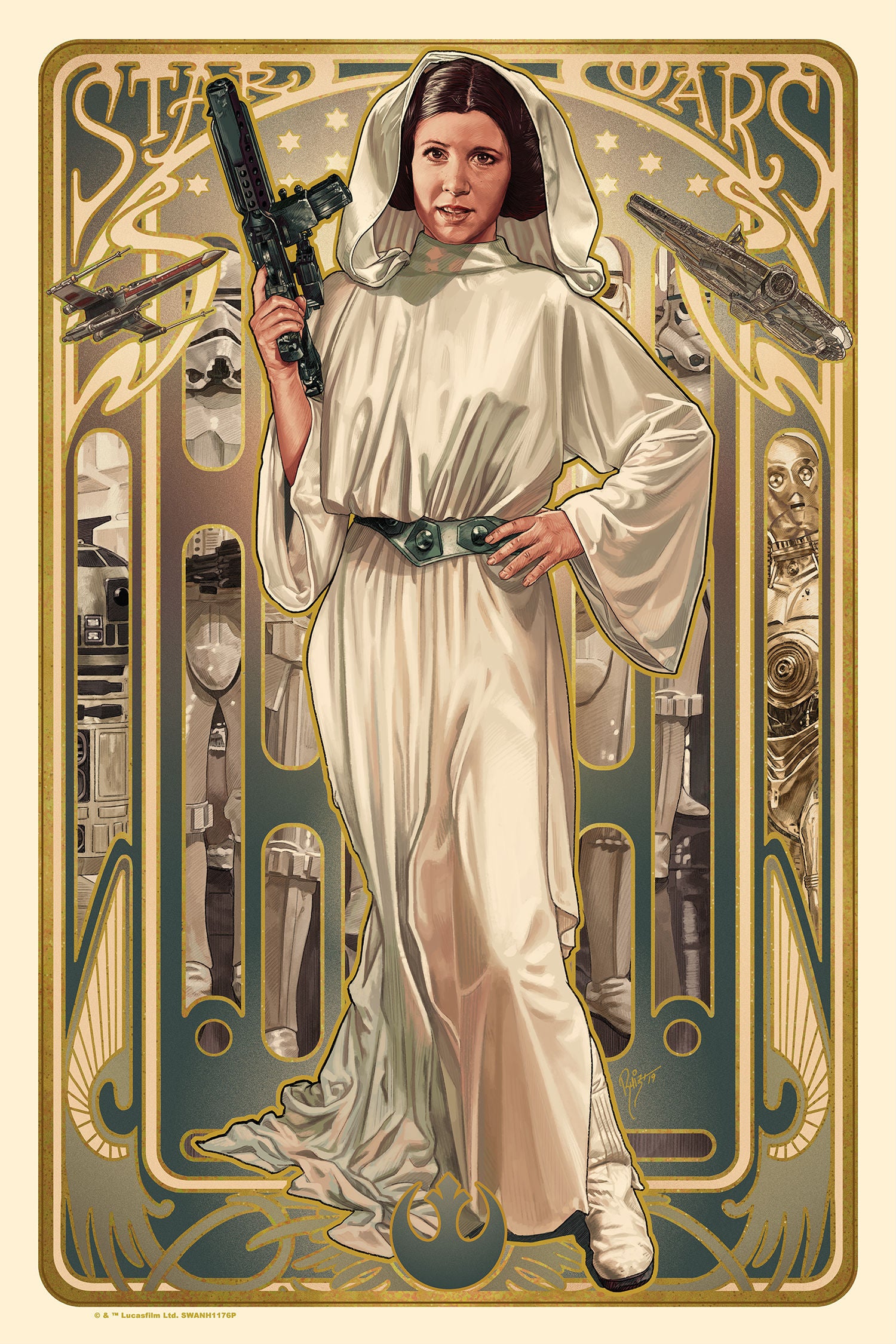 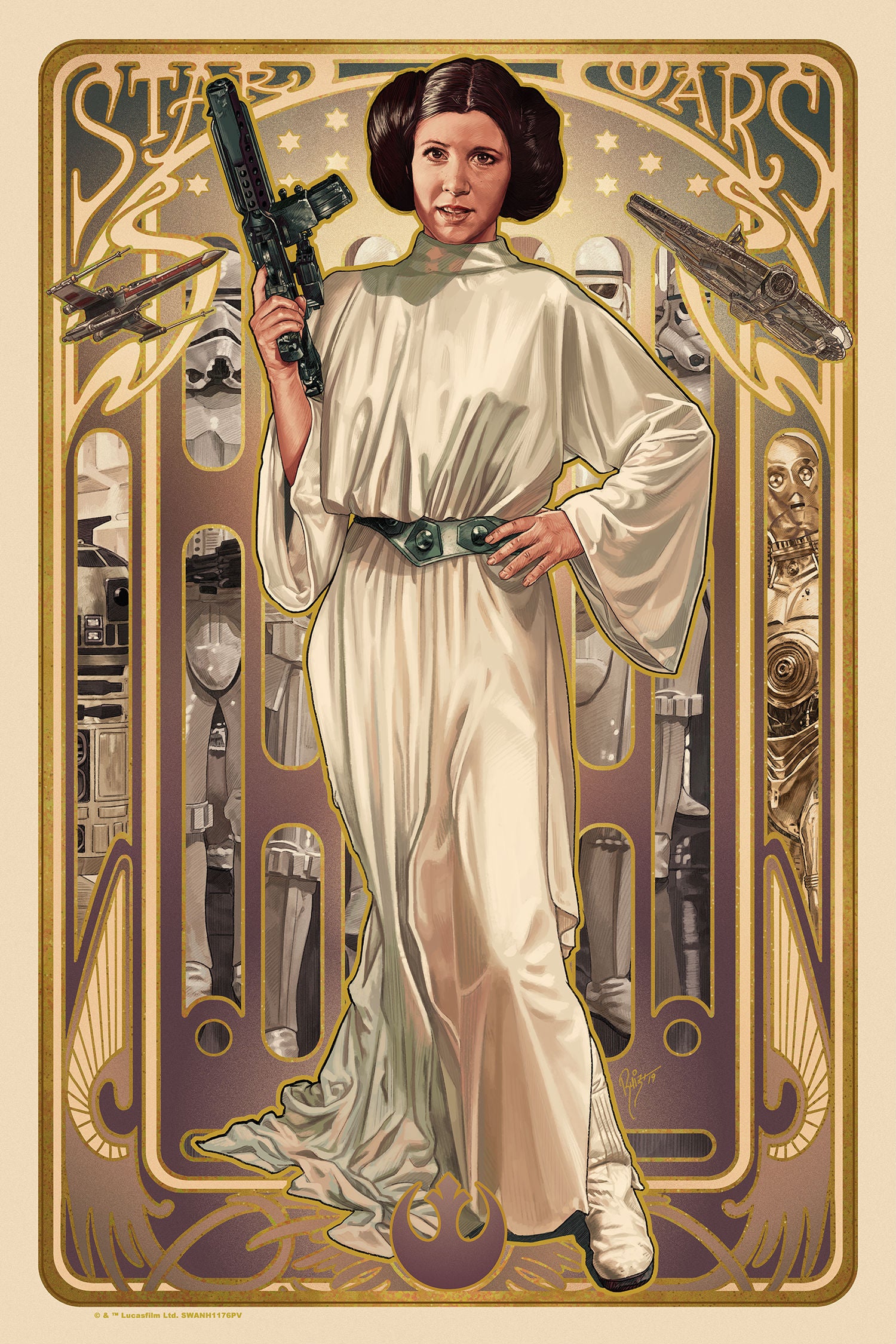 Besides the colours, the hood is the biggest difference there.

The colours are the main difference in Rule the Empire too, a new print by Tom Walker. This 60cm x 91cm print comes in a blue edition for 250 (which costs $75). 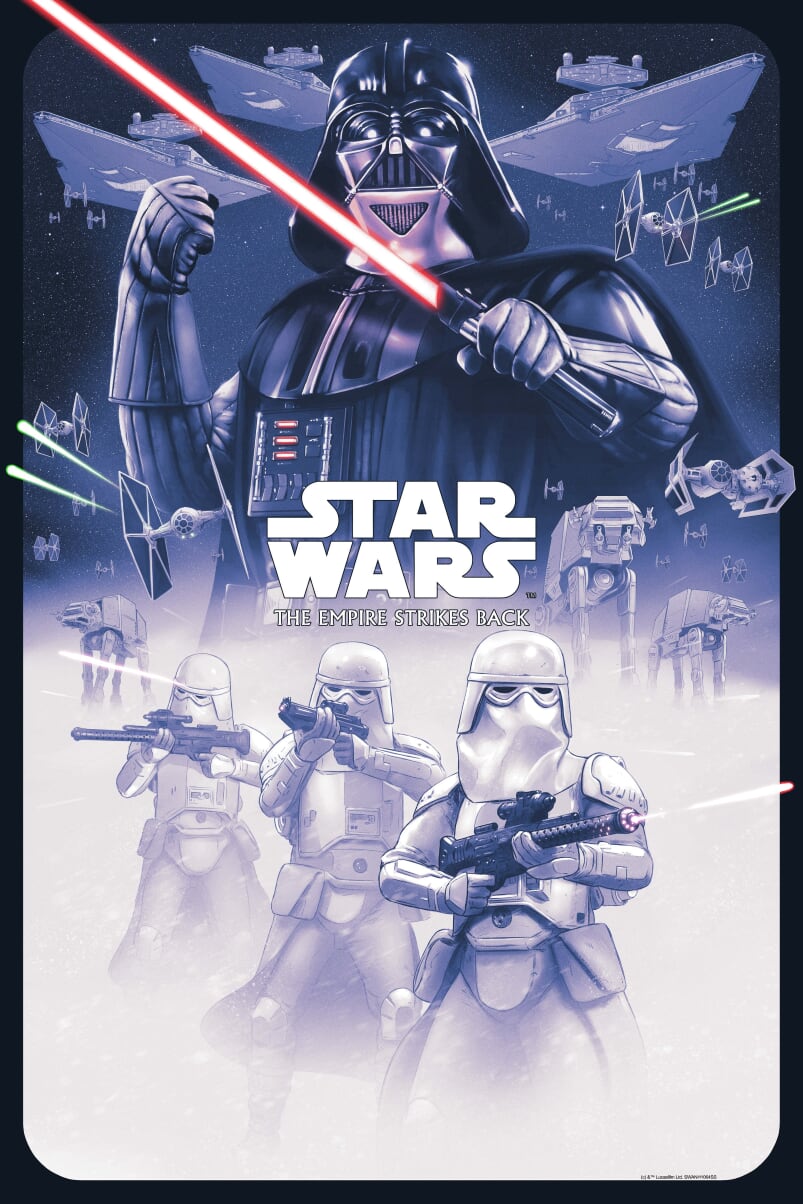 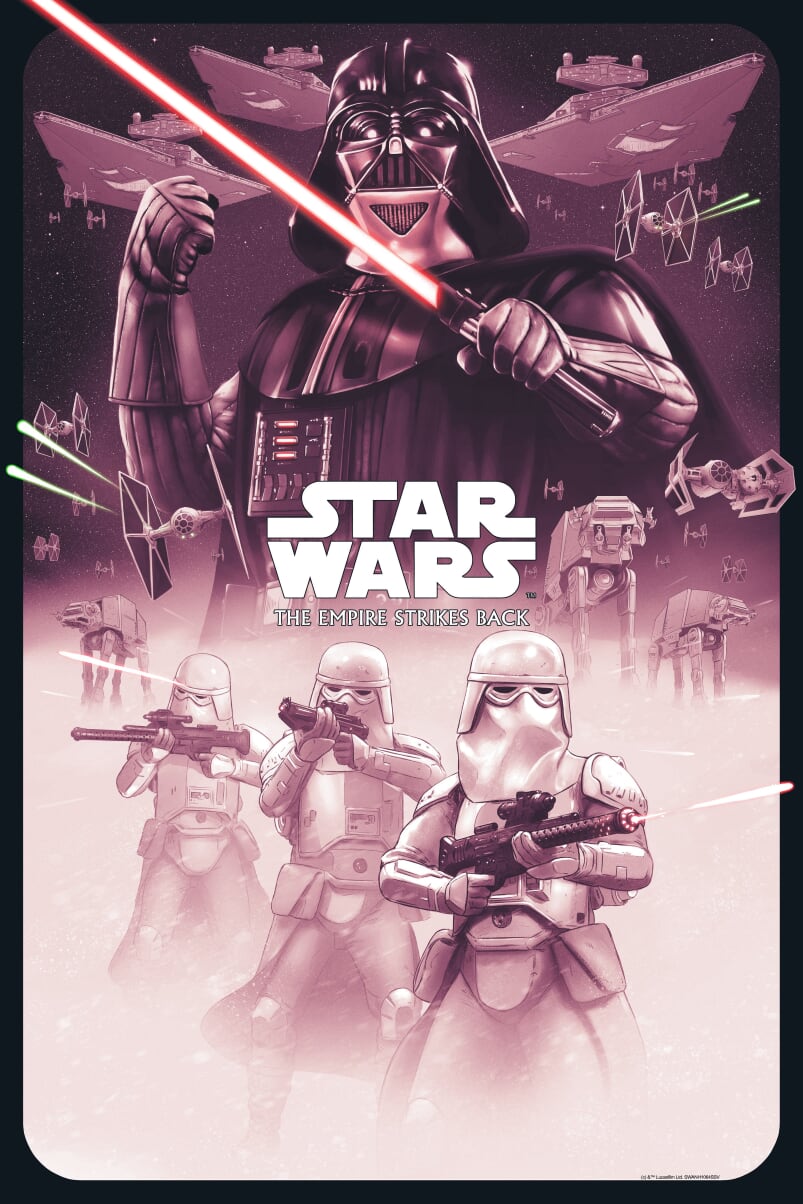 The final print from the original trilogy is a real stunner. It’s called His Deeds Will Not Be Forgiven Until He Merits and it’s by Anthony Petrie. There’s a 60cm x 91cm regular in an edition of 150 (which costs $75). 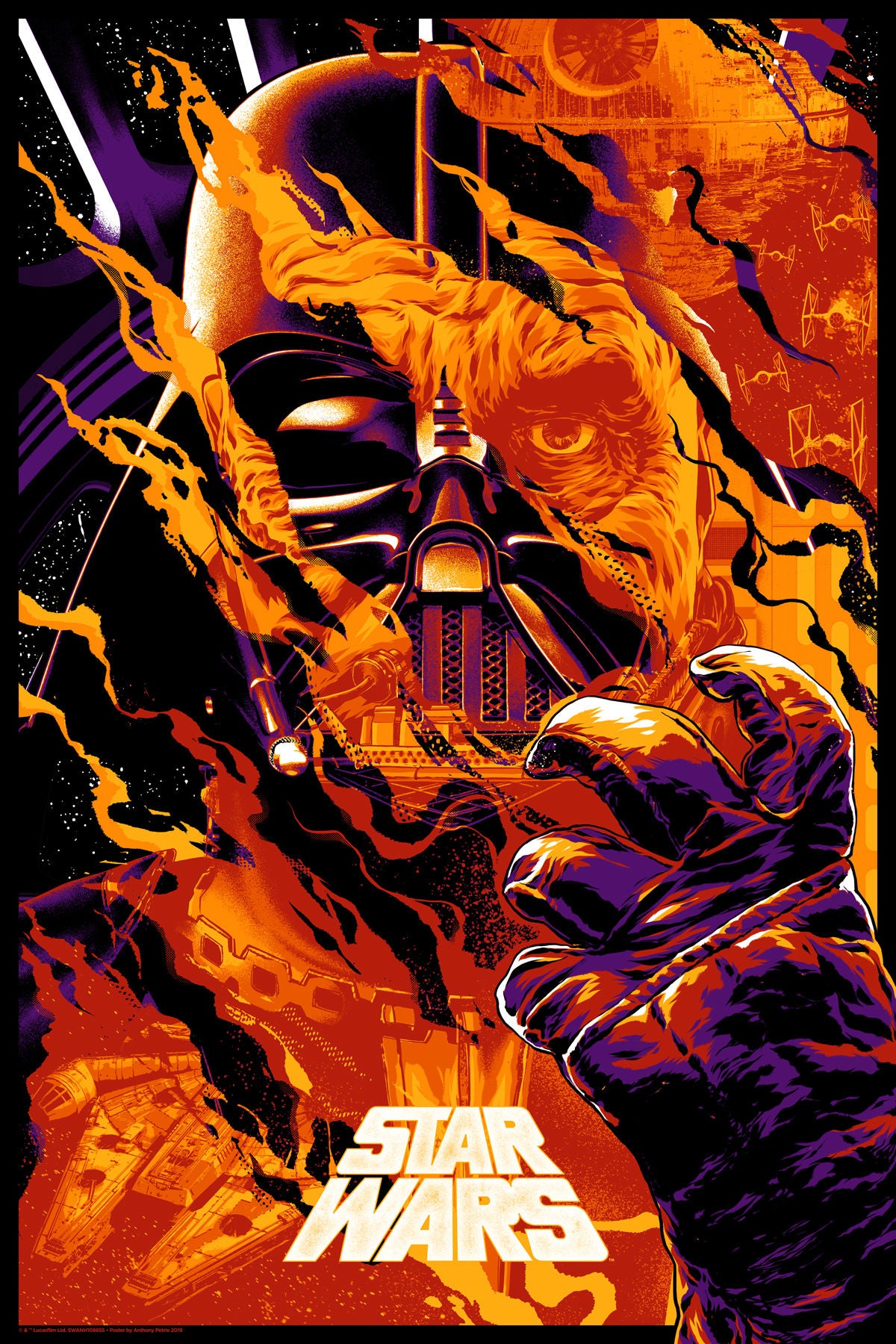 His Deeds Will Not Be Forgiven Until He Merits by Anthony Petrie, regular

And the variant version in an edition of 75. That costs $97. 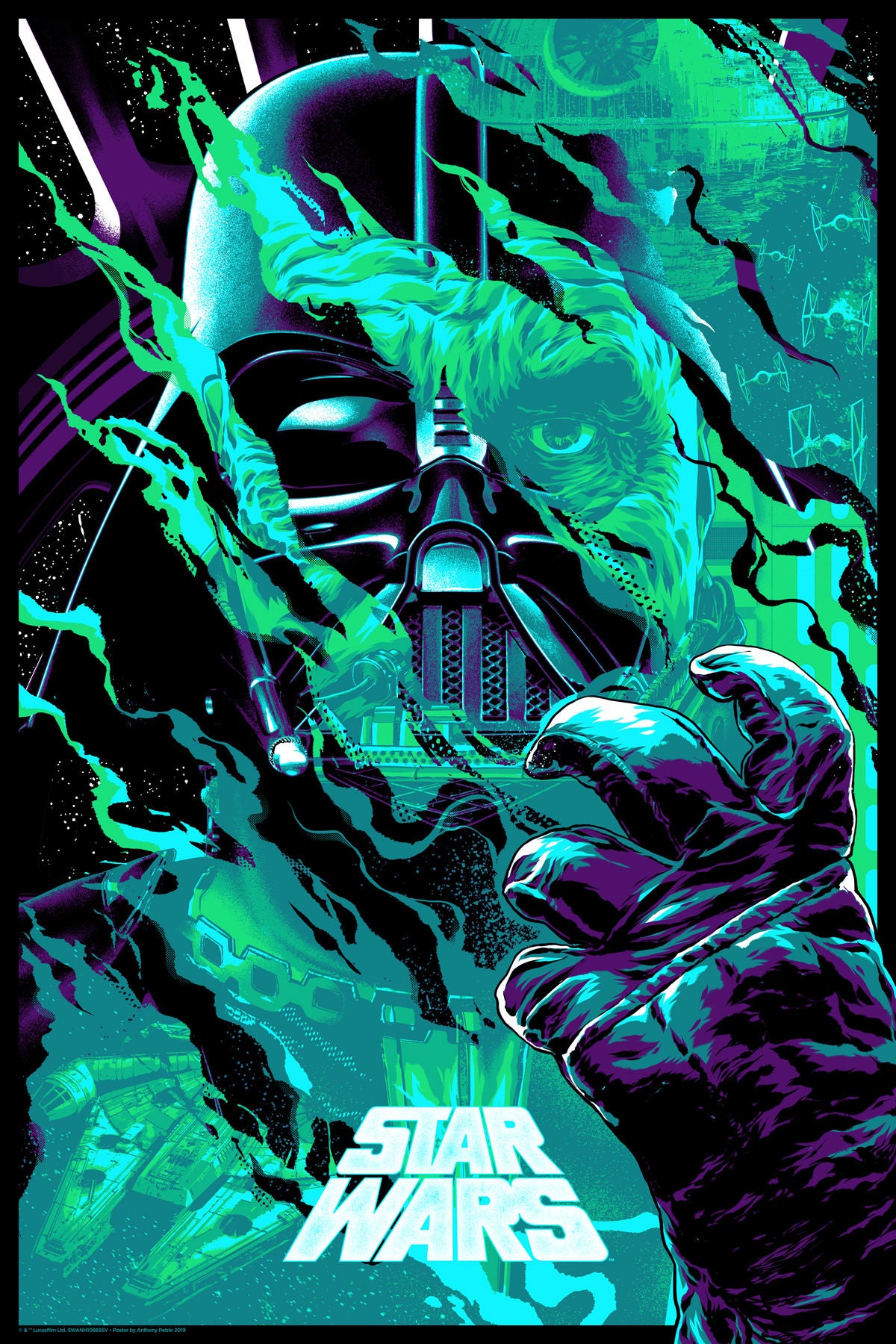 His Deeds Will Not Be Forgiven Until He Merits by Anthony Petrie, variant

“OK Germain, we got it. Rise of Skywalker, original trilogy, but what about me? I like The Last Jedi and The Last Jedi only. Where are some Last Jedi prints?” Well, person-who-totally-exists, Bottleneck and Acme have you covered too. Artist Karl Fitzgerald has done three different pieces based on Star Wars: The Last Jedi. The first two are each 45cm x 61cm in an edition of 150 and cost $75. They’re called Projection… 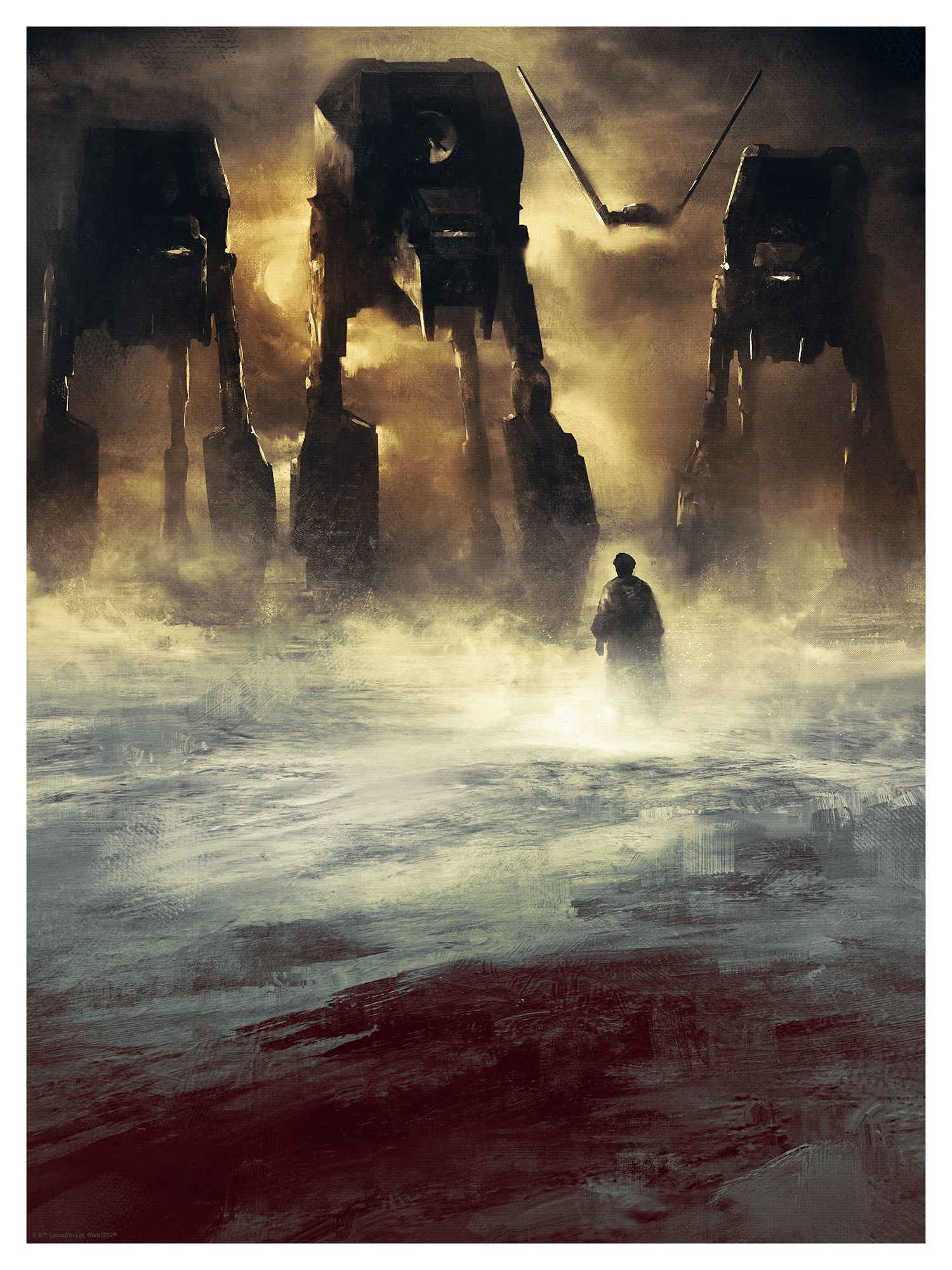 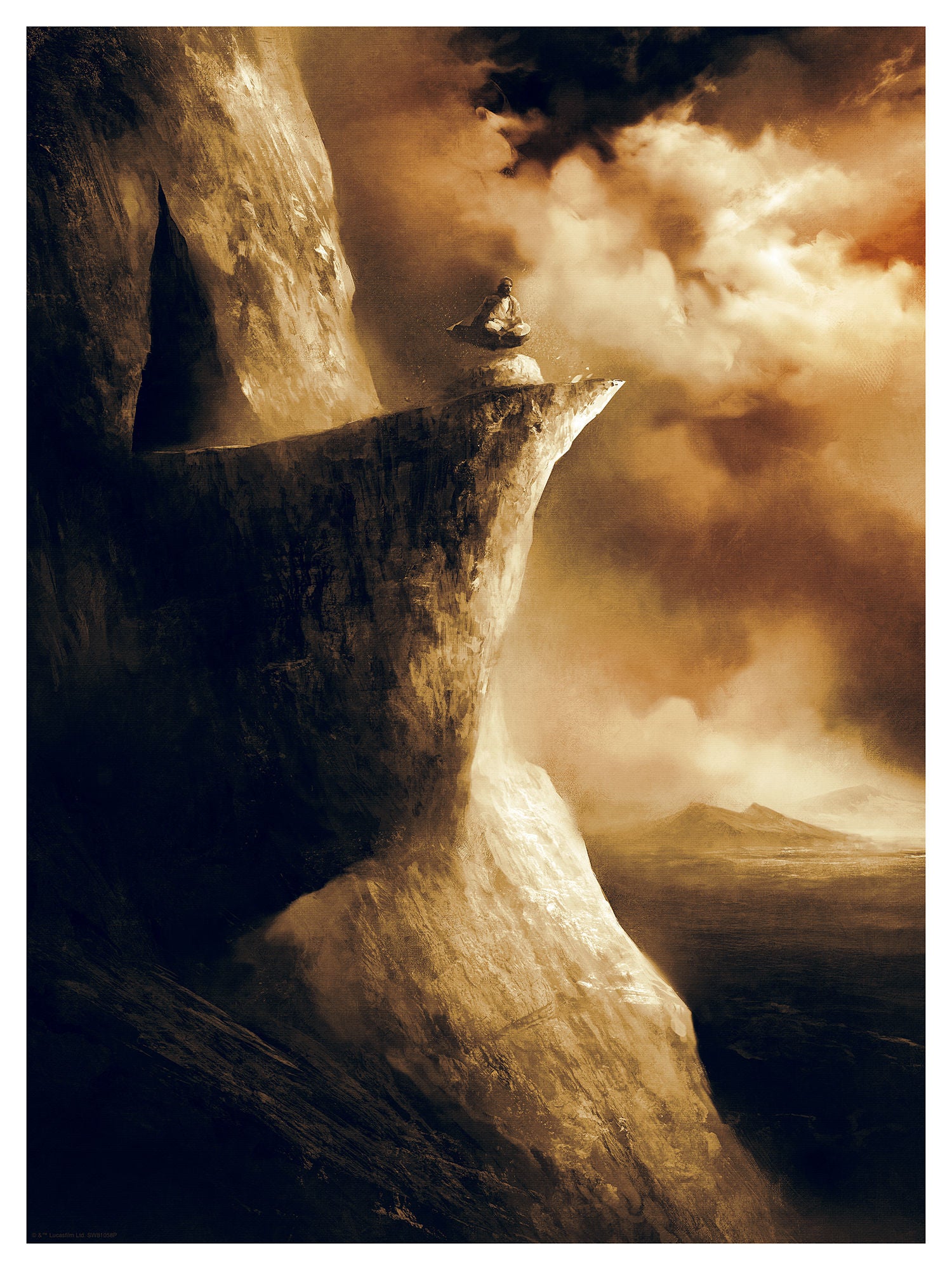 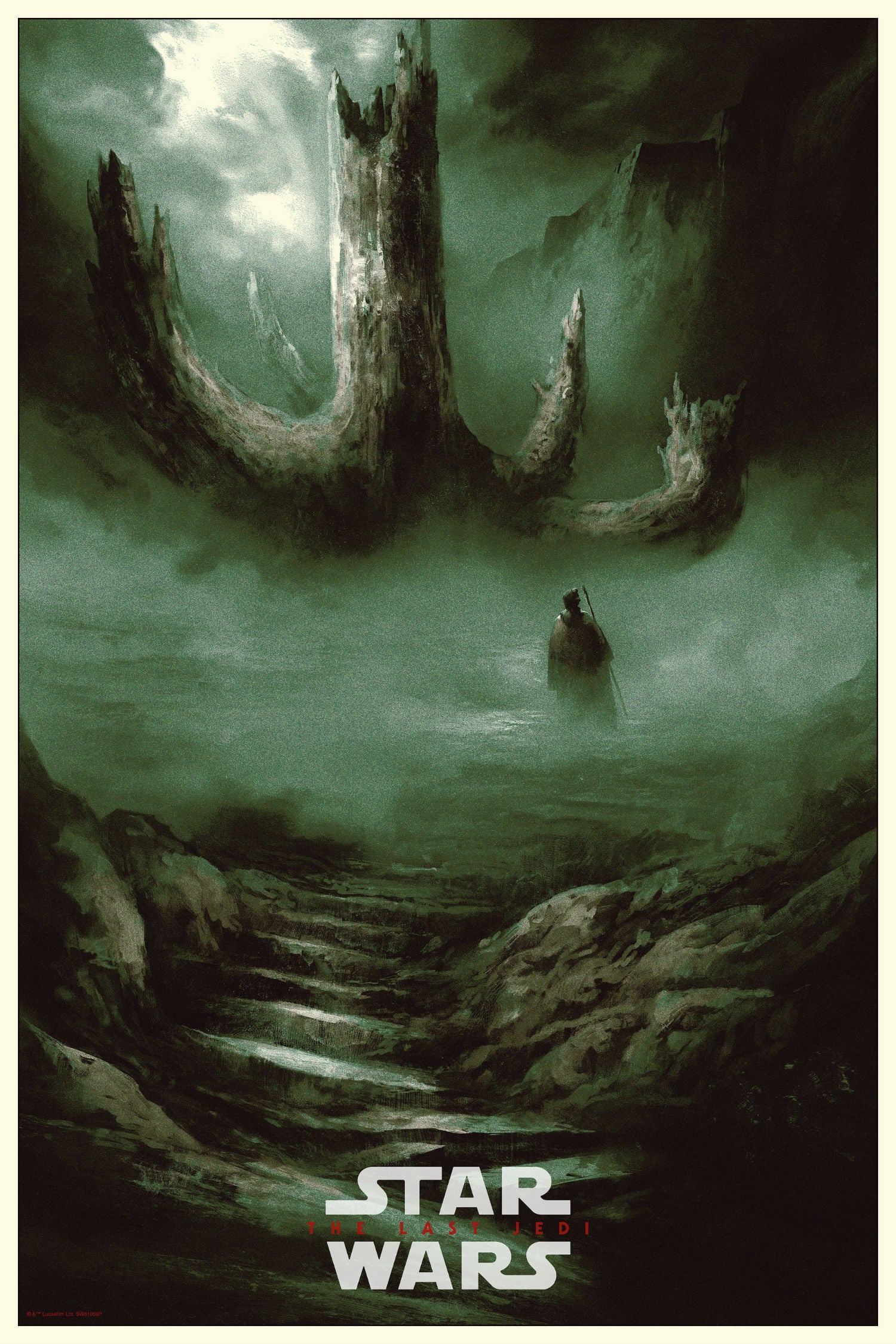 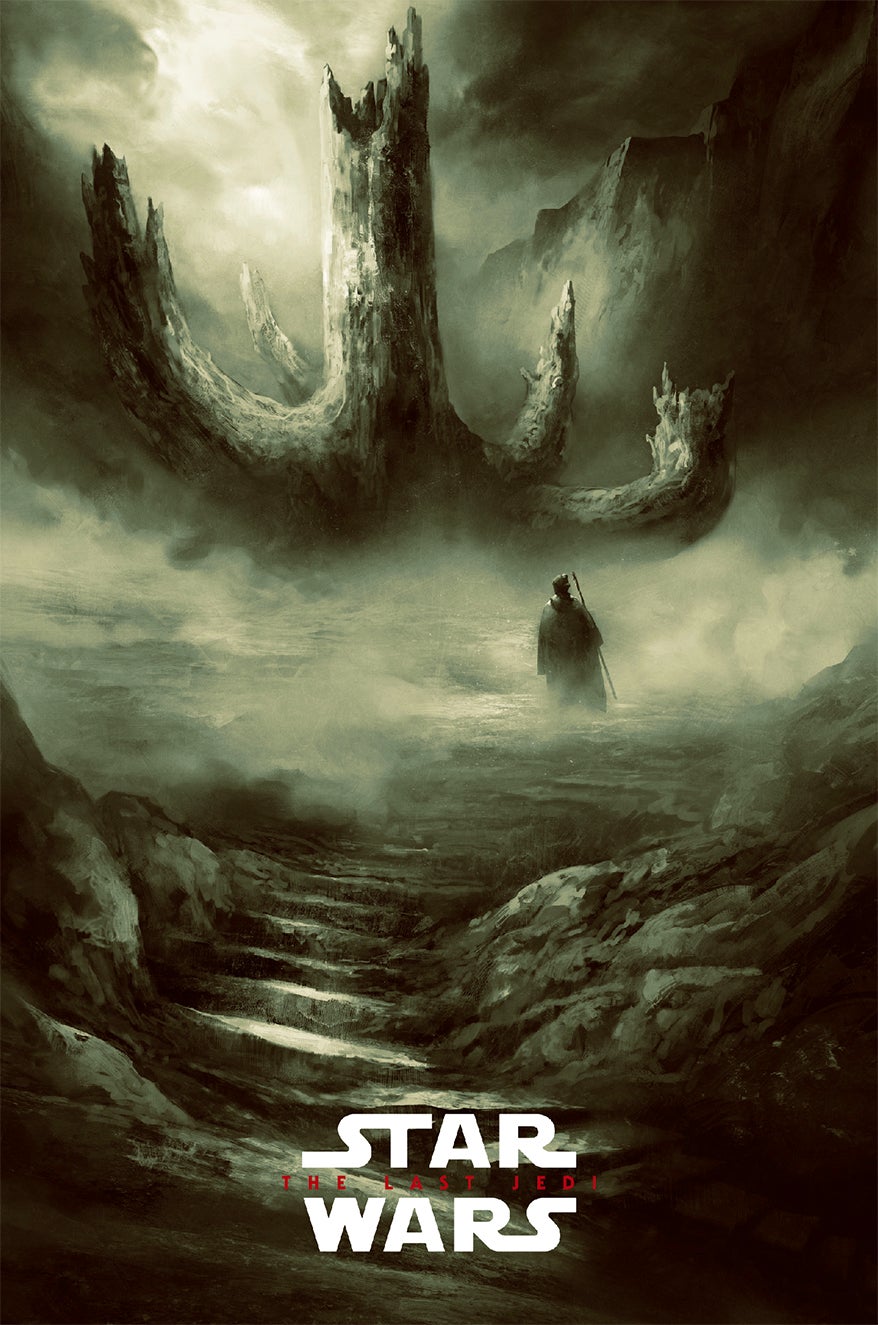 Oh, and that’s just the Star Wars stuff. If you head to Bottleneck’s website, you will find Avengers: Endgame, Indiana Jones, lots and lots and LOTS of Batman from all eras, even some Disney, Jurassic Park, Back to the Future, Spider-Verse and more. If you’re at NYCC this weekend, you’ve gotta stop by Bottleneck at booth 2160.

Editor’s Note: For those unlucky enough not to be able to attend the con, some of these items may appear online following the event, although it’s not guaranteed. Keep an eye out!