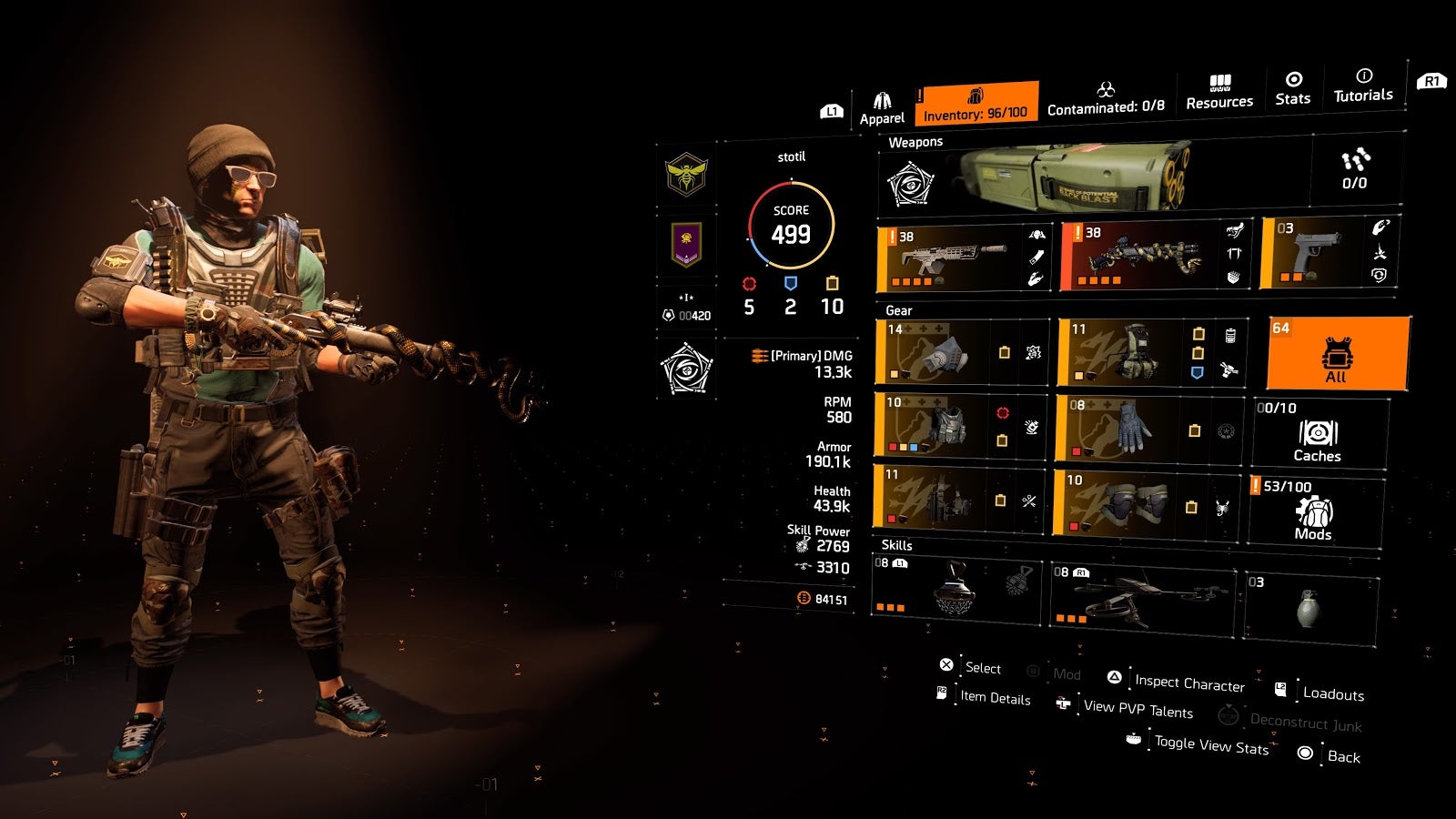 The Division 2 is, among other things, a maths problem. Sure, it’s a cover-based shooter and a guns-and-ammo fantasy about post-disaster America. But it’s also a game about stats and figuring out how to tweak them, improve them, and ensure that your character’s numbers are better than your enemy’s. It may sound as exciting as a new function being added to a spreadsheet program, but the sweeping changes make a world of difference and improve the gameplay.

As part of Title Update 6, three changes were added to The Division 2 for free earlier this month alongside new missions that slightly advance the game’s story. First, there’s a new thing called loot targeting that adds an alternate version of the game’s world map displaying where different types of guns and gear are most likely to drop from enemies and missions on a given day.

Second, there’s been an expansion to the game’s brand sets, ensuring that there are a full six pieces of tactical gear—knee pads, breathing masks, backpacks and so on—for nearly all of the in-game gear manufacturers.

Finally, a change was made to the game’s gear recalibration system that lets players swap attributes of different colours. Huge change, right? Put that one in the TV commercials.

The Division 2 was warmly received on release, boasting a remarkable bounty of enjoyable activities across its detailed rendition of Washington, DC, following a biological weapons attack on the United States. The successful launch was followed by several controversies, however, including the launch of an eight-player raid that lacked a promised matchmaking option. The most severe criticism involved the very thing that this new trio of updates addresses: an overall problem with the game’s loot, whereby getting great loot was tedious and frustrating and too few of the pieces of loot in the game even seemed worth getting.

This last problem was arguably the thing most holding The Division 2 back. In theory, if you’ve got a game with tons of stats and loot, you should have a game that supports a lot of player choice, and if you don’t, you’ve just got clutter. The loot needs to be varied, meaningful, and useful in many configurations. For those who made it to the persistent challenges and skirmishes of The Division 2’s endgame, the loot was failing that test. Players were all chasing the same gear for a narrow set of optimised builds and weren’t having much fun—let alone experiencing much gameplay variety—during that chase.

Here’s how the changes turned that big problem around.

This makes the hunt for loot more comprehensible and more varied. Every day, the map updates, showing new locations where players can farm for a specific type of weapon or gear from a specific in-game manufacturer. 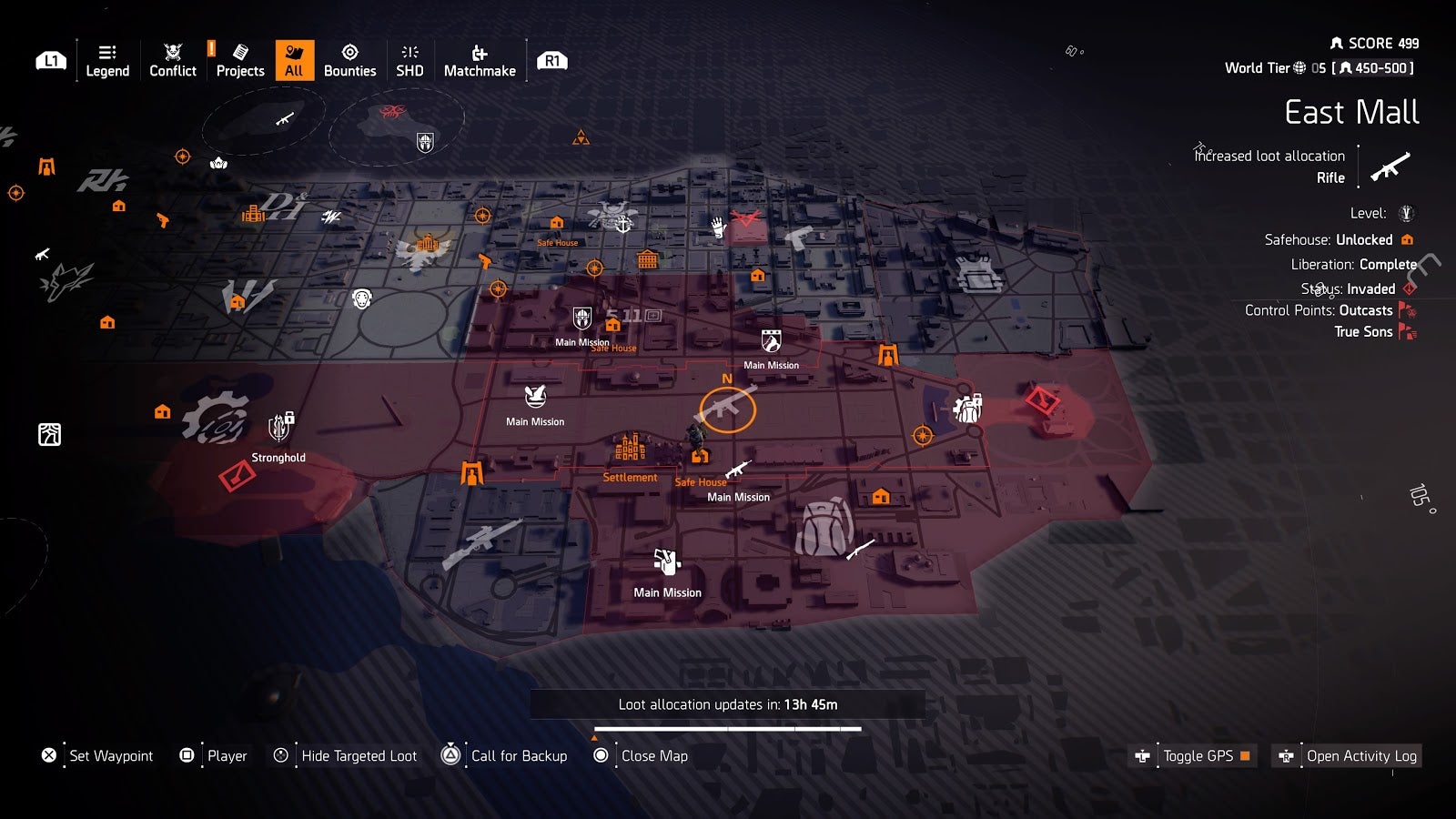 The new loot-targeting map showing where different types of guns and gear were most likely to drop on Sunday October 27. The distribution changes daily.

On Sunday, for example, players who were looking for better rifles could find the greatest abundance of them by completing tasks and fighting roaming enemies on the East Mall between the Washington Monument and the Capitol. If the player was more interested in farming for gear made by Alps Summit Armament, that was going to drop more heavily throughout the game’s ViewPoint Museum mission, set in a fictional version of DC’s Newseum.

On Tuesday, those locations all changed. Rifles are now dropping more heavily in the Federal Triangle area. Alps Summit Armament gear is most likely to drop in the District Union Arena mission, a fight set in a basketball arena.

There was nothing like this in the game prior to Title Update 6. You couldn’t predict where shotguns were most likely to drop from enemies or where you could most likely gather gear from a specific brand. On top of showing that, the daily rotation of where things are most likely to drop encourages players who are hunting for a specific kind of loot to try different in-game activities every day. Maybe today’s loot targeting nudges a player toward replaying the game’s enjoyable DC zoo mission or gives them motivation to just roam the area near the Lincoln Memorial.

The update to the game’s gear provides more options for players seeking brand perks. Every time a player equips gear from a certain brand, their character gains a perk tied to that brand, for a maximum of three brand-related perks. Before the update, some of the game’s gear manufacturers didn’t make gear for every equippable slot. Some were missing a chest piece, or a backpack, or gloves and so on. This meant that you could easily wear three pieces from one brand, but if you wanted to simultaneously wear three pieces from another, it might not be possible. 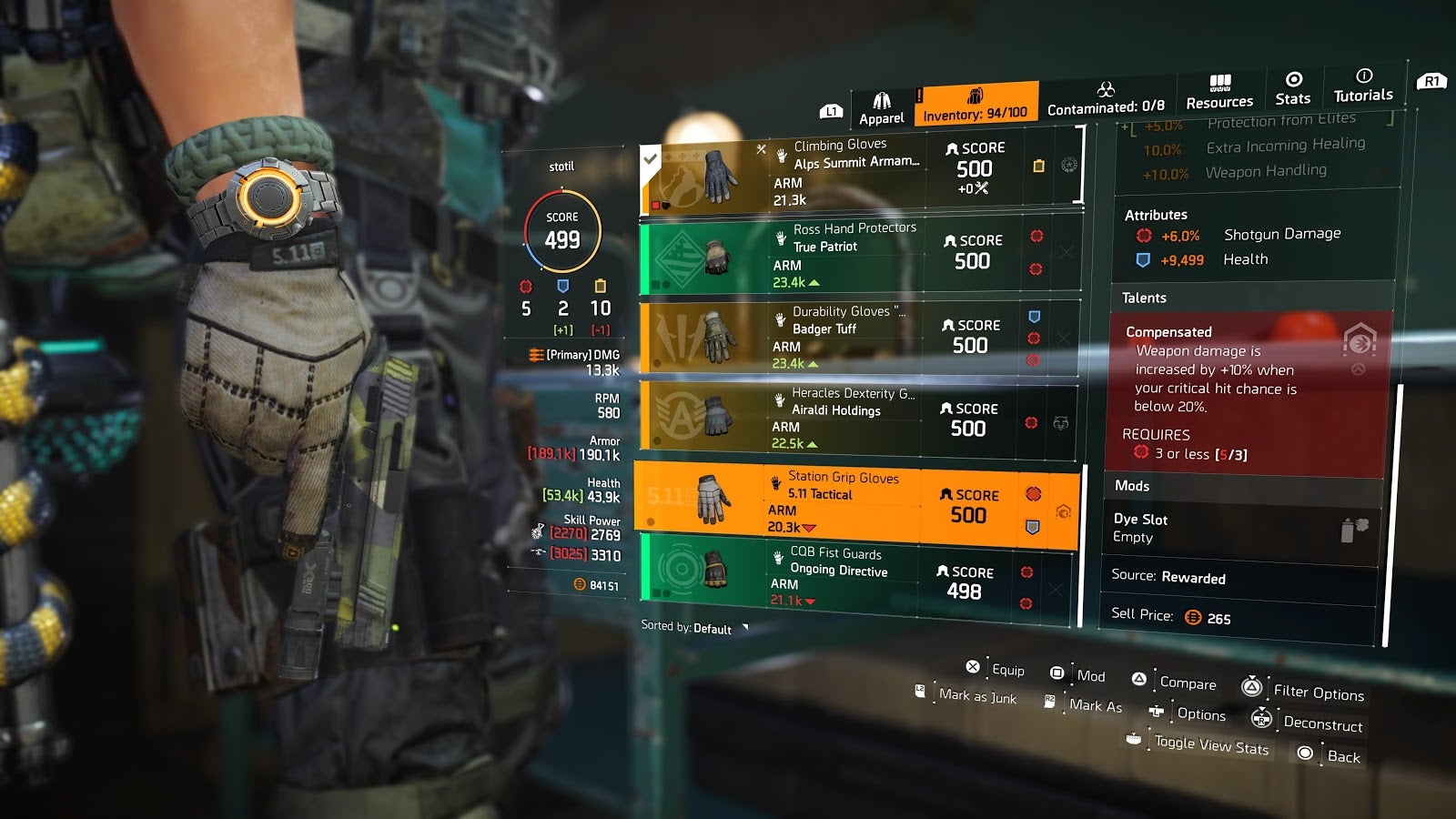 With Title Update 6, each brand offers full gear sets, so now it’s easier for players to wear three pieces of gear from one manufacturer for perks and three from another and get all of its benefits. That’s six perks overall, and if you’re a player who uses, say, a hive gadget and a drone gadget as your two equippable gadgets, being able to wear three pieces each from the Alps and Wyvern gets you really good perks for both. This is why knowing where a gear manufacturer’s stuff is most likely to drop in the game via loot targeting is so appealing.

But it’s the game’s change to gear recalibration that really makes this all click and makes playing The Division 2 long-term so satisfying. It comes down to the ability to swap a piece of gear’s attributes—that’s a technical term—with others regardless of the colour-coding of said attributes. Gloves, backpacks and the like all have attributes. Defence-buffing armour and health attributes are colour-coded blue. Offensive weapon perks are red. Attributes that enhance gadget skills are yellow. Being able to swap them freely is a huge deal. 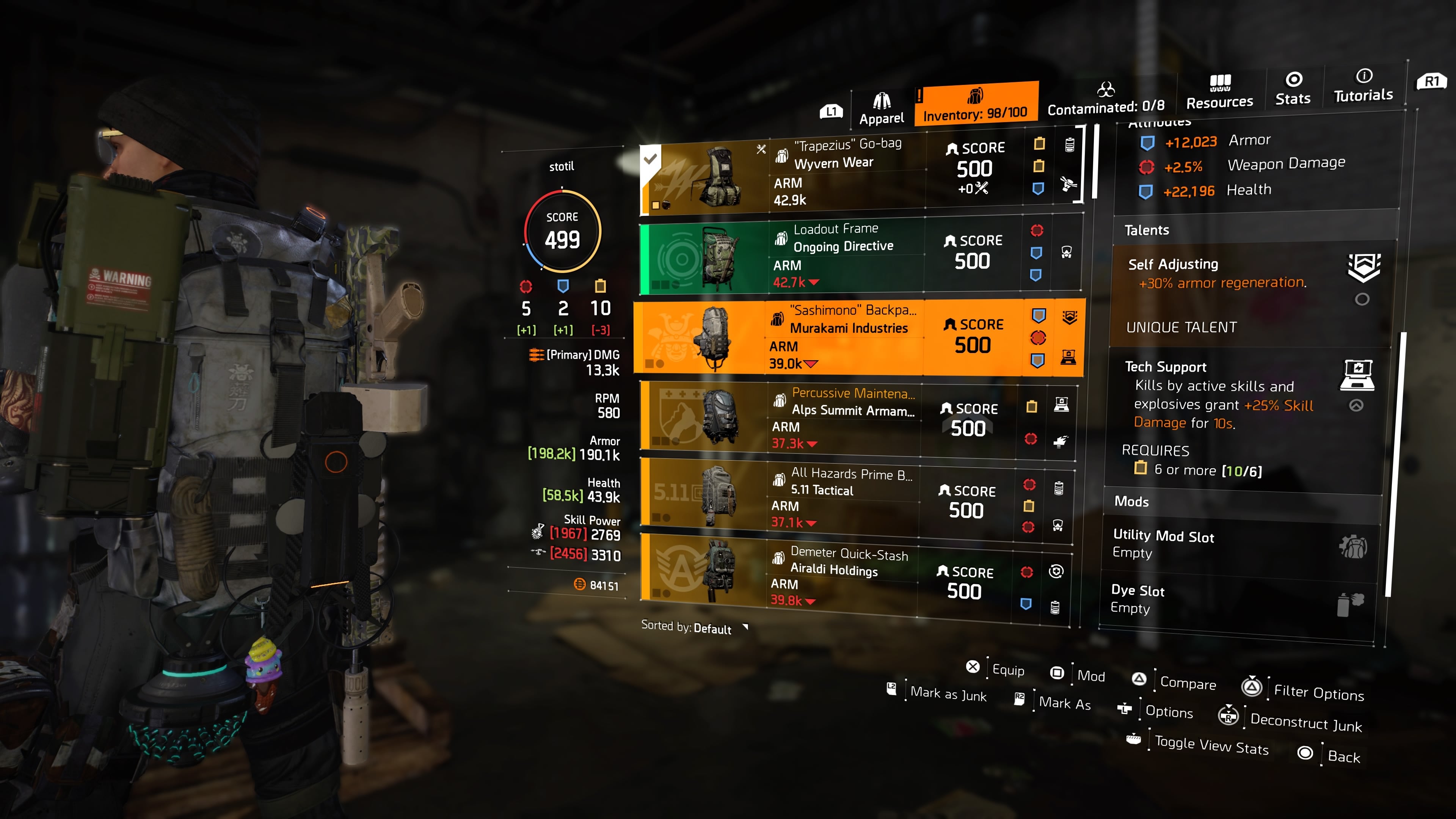 Previously, if a player went to the game’s recalibration bench to tweak, say, a“Sashimono” backpack, they’d be able to spend some in-game resources on replacing a blue attribute with another blue one from a different backpack in their inventory, a red with a red. Do you like the backpack for your character but don’t love that 12,000-point armour boost? At the recalibration bench, you can replace it with another backpack’s superior 15,875-point armour boost. Even better: Since Title Update 6, players can now replace that blue-coded armour boost with a yellow-coded boost to gadget skill power or a red-coded boost to critical hit chance or any other attribute from any other owned backpack, regardless of colour.

This dramatically deepens the extent to which players can customise their gear. A player may be running a character who they want to specialise in gun damage, for example, and thanks to Title Update 6, they can ditch yellow gadget attributes or blue defensive ones and load up on red-coded weapon boosts. This has made all gear more useful because it’s now far easier to make viable combinations of different gear.

That’s not all. That aforementioned Sashimono backpack doesn’t just have brand perks and colour-coded attributes. It also has a “talent,” perhaps the Tech Support talent which causes kills from explosives or gadgets to make subsequent gadget-based offence more potent for several seconds. There’s just one catch. The Tech Support talent, like many gear talents, can only be activated if the player has the right amount of colour-coded attributes across all of their gear. Reread that sentence if you need to. In this case, the Sashimono Backpack’s talent only works if a player has six or more yellow attributes spread across their six pieces of gear.

Thanks to the new update, players can far more easily hit whatever threshold they need to activate a given talent. The talent you want to activate might require you have at least seven yellows or fewer than four reds and so on. Being able to change colour-coded attributes means being able to easily change the number of reds, blues, and yellows without having to ditch a piece of gear entirely. Again, the result is deeper customisation for players, allowing for a lot more tinkering and ultimately more options for players to create effective, distinct character builds. 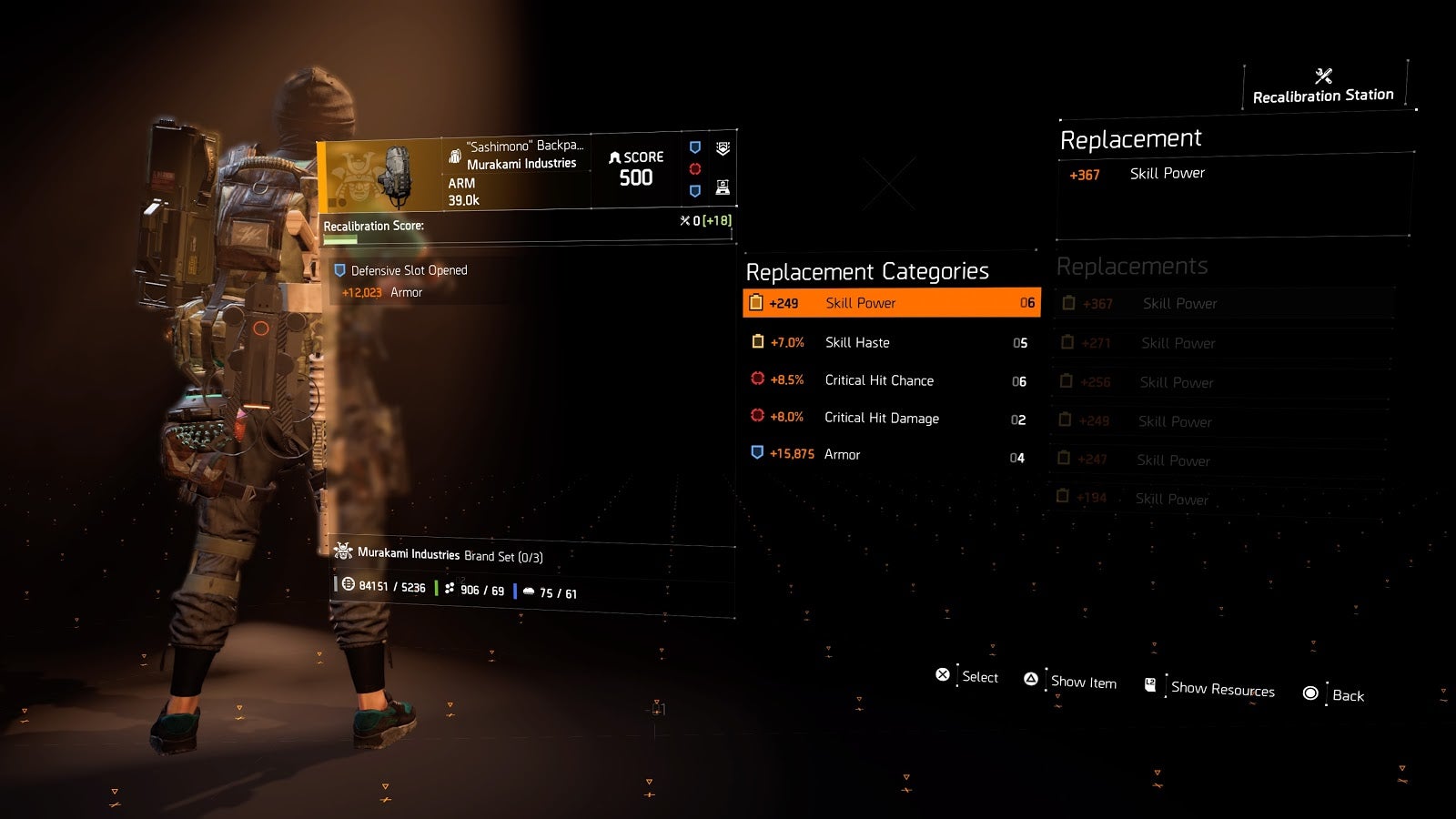 There’s a lot of number crunching behind these changes, but here’s the bottom line: The Division 2 is a far more satisfying game to play now. Before Title Update 6, plenty of gear dropped as you played the game, but the drops were seldom useful, let alone predictable. After Title Update 6, it’s way easier to find the kind of loot you might want through the loot targeting map, then use the improved recalibration to tinker with that loot in ways that actually improve your character. As you figure out what you want next, you can then turn back to the loot targeting map to find it, too. This amounts to a very satisfying and more player-friendly loop that incentivizes players to pursue more varied builds for their characters.

The Division 2 isn’t fully clear of its thicket of problems. From a gameplay perspective, it lacks many compelling repeatable modes along the lines of the randomised Underground mode of the first Division or of, say, Gambit in Destiny 2. Two major episode content updates have added story missions but haven’t substantially expanded the game’s map. It only has one raid, and its second was delayed until 2020. The dense game world is not exactly lacking in missions and activities, though, and thanks to these improvements, all of what you can do in the game is now more rewarding. Playing the game feels better.

It’s a little frustrating that Ubisoft probably won’t build anything more atop Title Update 6 until next year, but it firms up the foundation. There’s a promising framework for what comes next.