The World Might Not Be Ready For Tom King, Mitch Gerads And Evan Shaner’s Strange Adventures 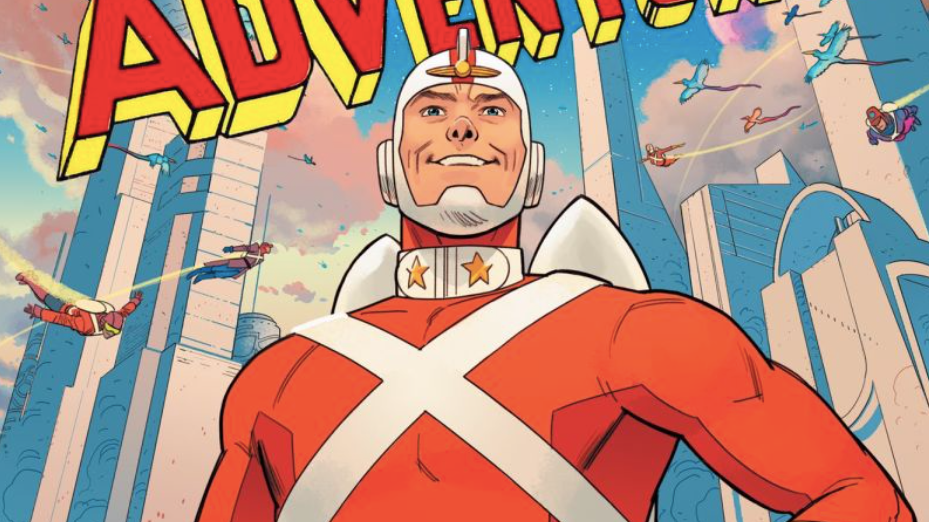 The cover of <em>Adam Strange</em> #1. (Image: Evan "Doc" Shaner, DC Comics)
To sign up for our daily newsletter covering the latest news, features and reviews, head HERE. For a running feed of all our stories, follow us on Twitter HERE. Or you can bookmark the Kotaku Australia homepage to visit whenever you need a news fix.

Tom King’s made a name for himself by telling stories about classic white guy heroes who find themselves on the verge of mental collapse as their worlds suddenly become complicated in ways one doesn’t often see in comic books. At this year’s New York Comic Con, the writer announced that Adam Strange will follow in that familiar tradition of his series.

At DC’s World’s Finest panel at NYCC this year, Tom King, Mitch Gerads, Kami Garcia, Joelle Jones, Evan “Doc” Shaner and Joshua Williamson took to the stage to discuss the futures of some of DC’s most complicated characters, and how all of the comics creators personally feel about the heroes and villains they’ve been shepherding lately.

Though the audience was definitely waiting for the Strange Adventures announcement, the panel made clear that there are still big, interesting things happening in DC’s larger multiverse of thematically resonant, but narratively distinct stories featuring characters like Harley Quinn, Batman and the Joker.

Even though Harley’s become overexposed much in the same way that the members of DC’s official Trinity have been for decades now, Kami Garcia, Mico Suayan and Mike Mayhew’s Joker/Harley: Criminal Sanity sounds as if it might actually end up being the rare story that has something interesting to say about the clown duo’s troubled history.

During the panel, Garcia explained that while the comic is definitely, you know, a comic book, its story is also very much a procedural ” one that tracks the evolution of a serial killer from the perspective of the psychiatrist tasked with observing and treating him. Though the book’s definitely set in a version of Gotham that’s a heightened reality, Garcia emphasised that the story’s meant to be largely grounded and focused on the Joker’s psychology, even consulting Dr. Fred Berlin ” the psychiatrist who profiled Jeffrey Dahmer ” in order to make the story feel more realistic.

Elsewhere in the DC Universe, the moment that DC’s villains are having right now is set to continue with a new Flash event that sees a number of Barry’s rogues realising that there’s power in numbers, because a speedster can only deal with so many criminals at once.

Williamson explained that following the current “Death of the Speed Force” arc, his “Rogue’s Reign” story will follow as the titular rogues descend upon Central City and make it their own, forcing the Flash into action. Williamson and King joked about the number of similarities between “Rogues Reign” and King’s current “City of Bane” arc ” which has seen Batman’s backbreaking foe enact a grand plan to take Gotham for his own alongside a host of various villains ” but King made clear that, beyond his work on Batman, he’s still committed to bringing other kinds of energy to DC’s books.

Case in point: King, Gerads, and Shaner’s upcoming Strange Adventures, a book King described as being a psychological exploration of the difference between the myths we tell ourselves about reality, and the truth of what reality actually is.

Yup. Sure as hell does sound like a Tom King book!

Though the creative team didn’t go into detail about what the series will explore, King explained that the reason two artists are working on the entire book is to convey that the story’s heroes ” including DC’s classic adventuring rocketeer, Adam Strange, of course”will constantly be grappling with two realities, but not in a strictly literal sense.

In order to convey perspective in different moments, both Gerads and Shaner’s art will depict different takes on the same scenes, giving readers an understanding of the complex things happening to the person whose perspective you’re meant be seeing things from. That person, King revealed, won’t just be Adam Strange, however, because these adventures aren’t just his alone.

Beyond the teases, the biggest takeaway from the panel was that everyone working on DC’s big upcoming titles feels creatively energised in ways that we’re going to see reflected in their new books. That’s good to hear, but what remains to be seen is if their enthusiasm will lead to series that draw readers in when these new books and storylines begin rolling out next year.