Mutantkind has entered a bold new age. Mutants are here, they are proud, they are independent ” and they are also down to bonk.

In the wake of the shocking conclusion to the duology that is Marvel’sÂ House and Powers of X, this week saw the release of X-Men #1, kicking off an entire new roster of X-books that carries on the audacious ideas mutant mastermind Jonathan Hickman began to establish in his landmark event series.

Penned by Hickman, with art by Leinil Francis Yu, Gerry Alanguilan, and Sunny Gho, and lettering by Clayton Cowles, X-Men #1 offers a heady mix of the superheroic and the mundane. It contrasts Cyclops, Storm, and the X-Men going out on further missions to stop humanity from potentially bringing about the rise of a post-human existence that could render mutant evolution doomed with… well, Cyclops, Jean Grey, Wolverine and a bunch of other mutants having dinner with Christopher Summers, a.k.a. Corsair, a.k.a. Scott’s dad. Normal, perfectly relatable family dinner!

In Scott’s Krakoan-created house. On the moon. Specifically the former cradle of Inhumanity itself, the blue area of the moon. The view is lovely. 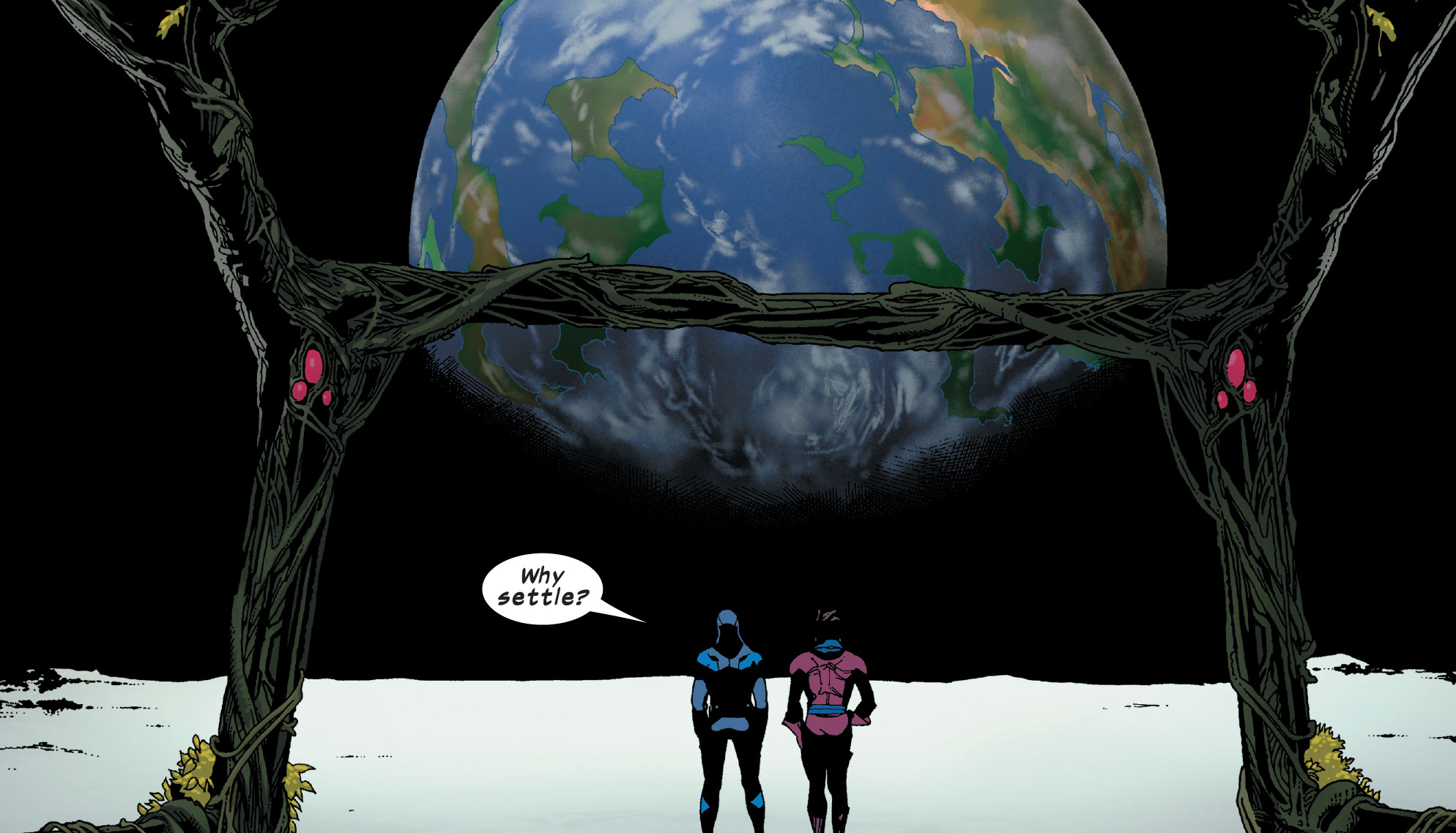 But we’re not here for the view. We’re not even here for dinner. We’re here for a commonality X-Men #1 shares with House and Powers: the beautifully sterile infodump interstitials designed by Tom Muller. As dinner in the Summers House gets underway, we cut to a series of pages looking at the architecture of the building and its layout. 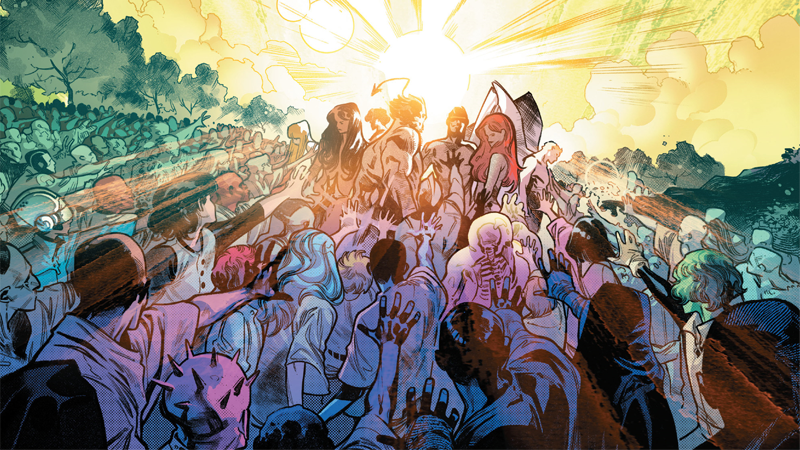 This Is Who The X-Men Really Are

We see them. But do we know them?

And friends, I can’t quite believe I’m about to say this: it might be the fuckiest architectural blueprint ever presented in a comic book. Or in anything ever: 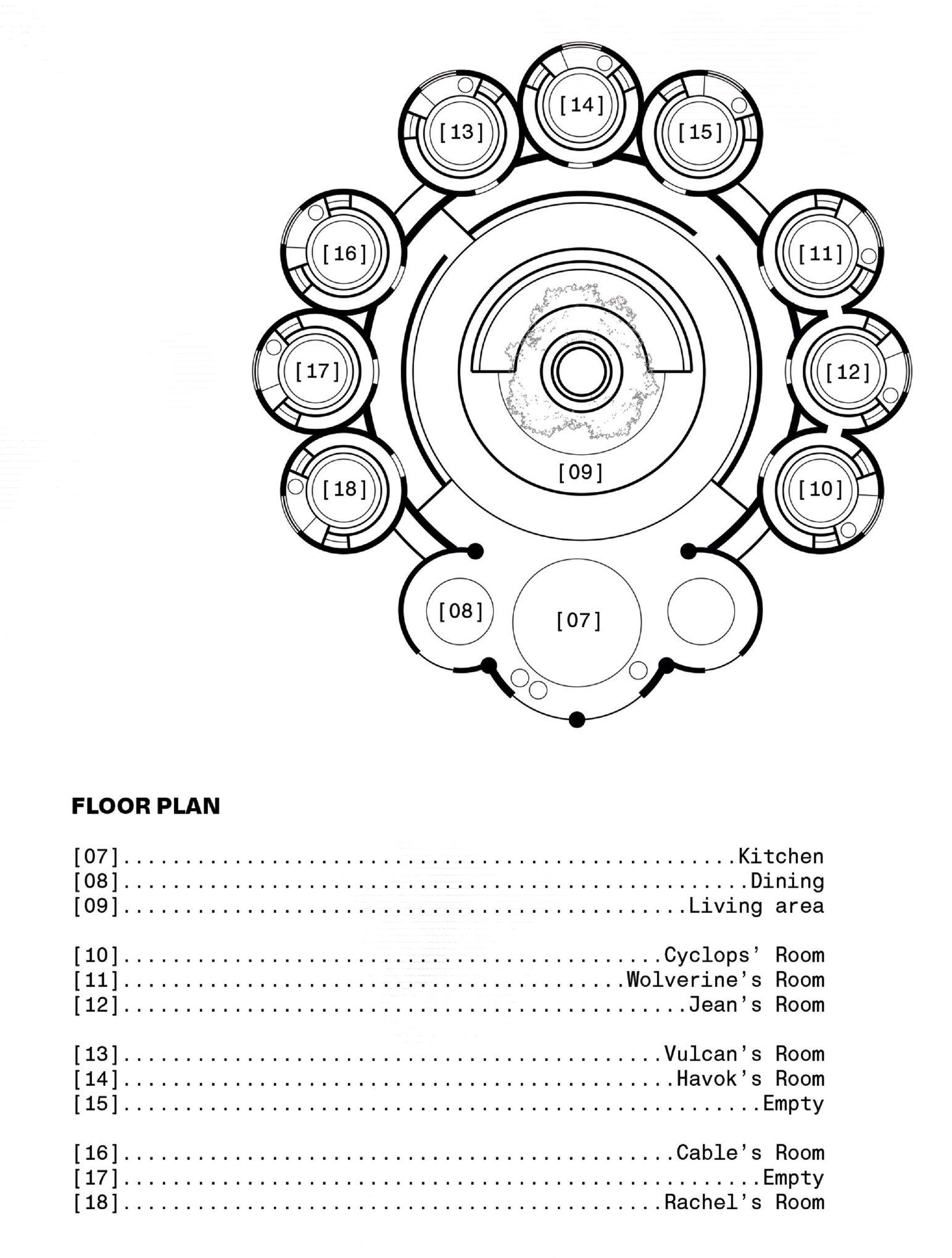 Please note, the positioning of Cyclops, Wolverine, and Jean’s bedrooms. Please note further, that the numerical order of these bedrooms is broken specifically to sandwich Jean’s room betwixt Cyclops and Wolverine’s.

Please note further still, that those three rooms are also the only three rooms with open doors connecting them together.

What on earth ” well, what on the blue area of the moon ” could they need an open-door policy for? 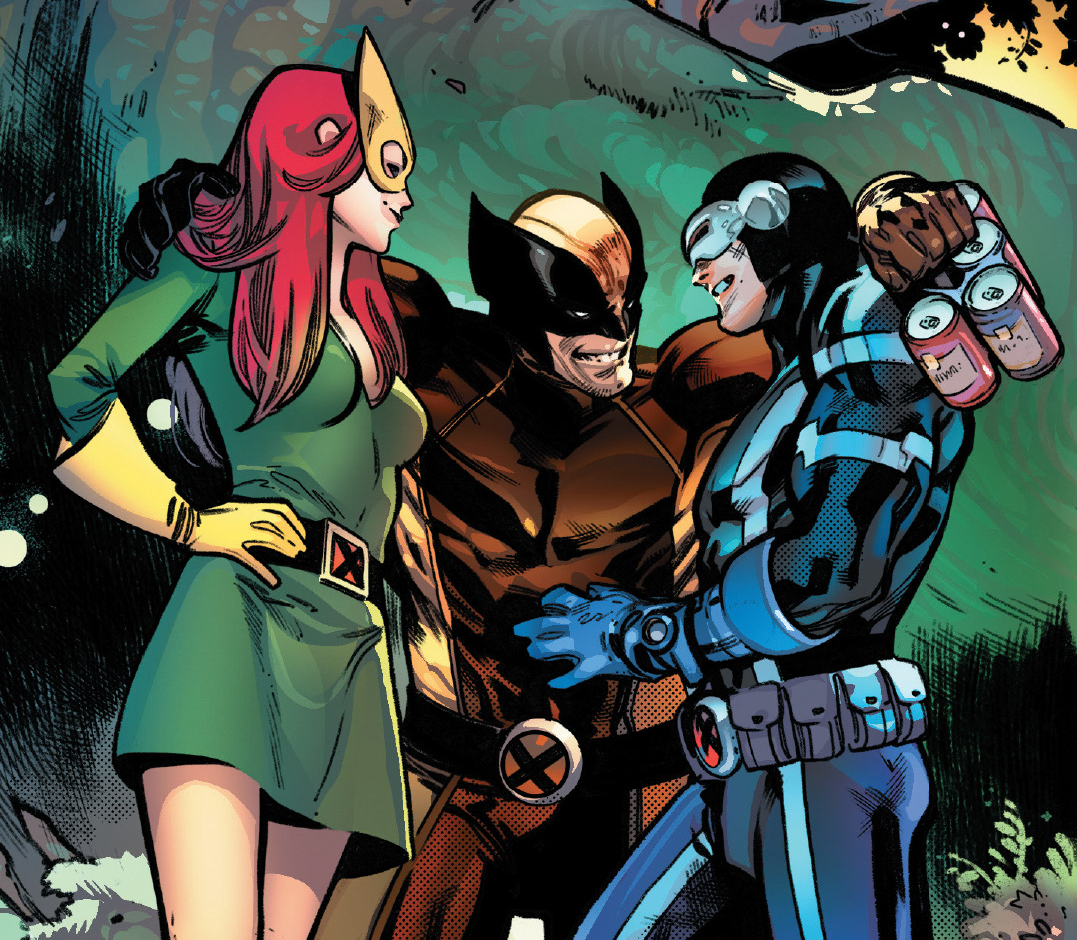 This should be no surprise, of course ” after all, House of X #6 showed Krakoa’s newly formed government, the Quiet Council, laying down the three main laws of the mutant nation. The first was that no mutant should kill a human. The second was that all mutants should respect Krakoa, the living being they now also call their island home. The third, courtesy of Kurt Wagner, a.k.a. the Nightcrawler himself, was, well… let mutants bang. 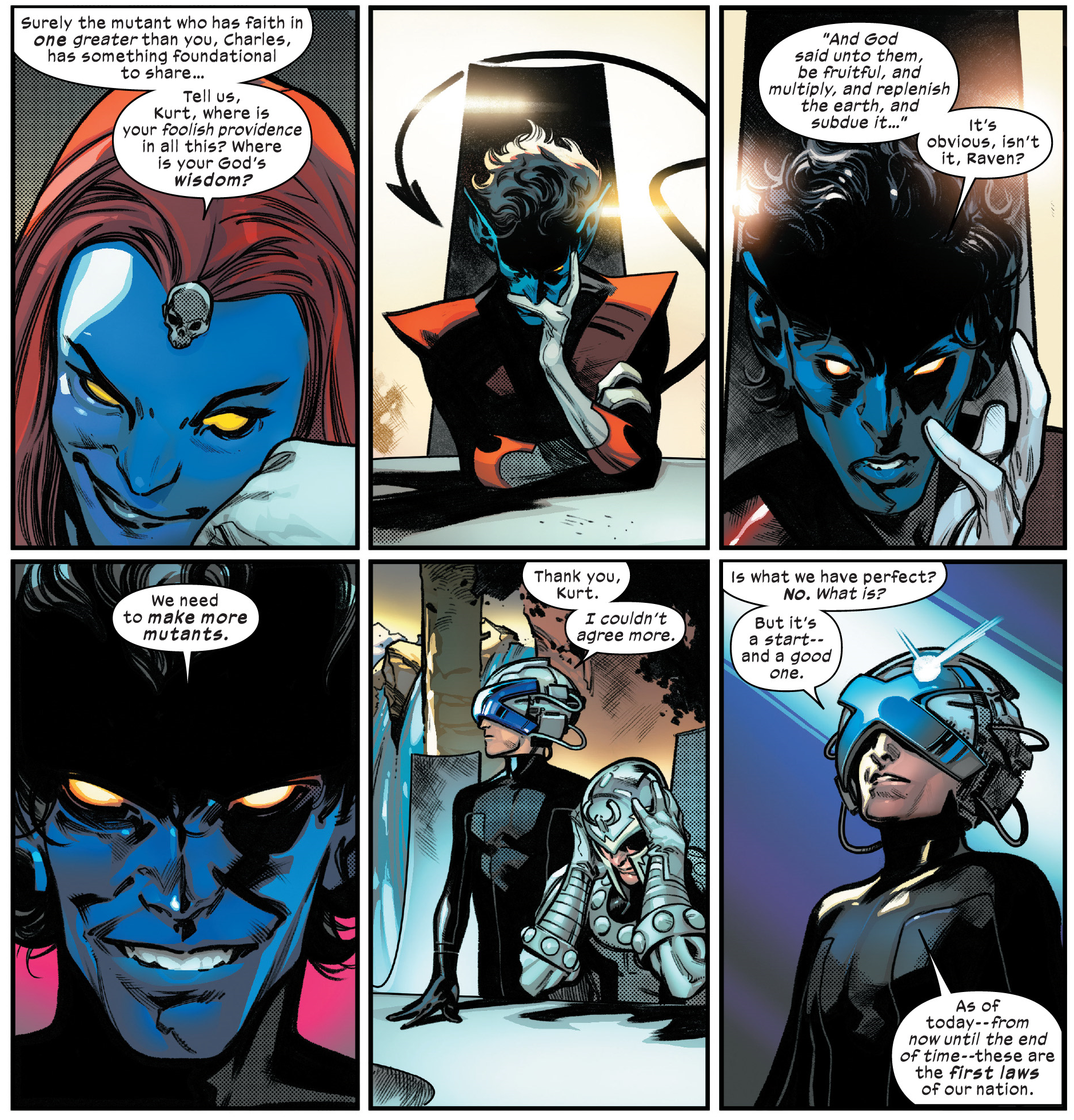 Literally, Kurt got procreation woven into the very heart of mutantkind’s new system of governance. The randy devil. And mere pages after that, we were treated to that aforementioned panel of Jean, Logan, and Scott seemingly rather enjoying each other’s company. That, combined with the design of the Summer House Muller created in X-Men #1, and X-Men fans have been making all the eggplant and eye emojis they could muster at the trio. Because c’mon, it’s obvious: These mutants are banging.

I guess you could say that they, and whoever else wants to get down, are just following orders. But after years of decimation, it would appear that the X-Men have a bold new mandate: the swingers party to end all swingers parties.

But behind the fun idea that Scott got Krakoa to build himself a house that specifically enabled mutant threeways, there is still this undercurrent of emotional distance and alienness to the mutants in X-Men #1, even as they go about the relatably banal periods of hanging out having dinner and relaxing in between beating up their enemies and smart apes in this issue.

There are moments of unease throughout ” Polaris questioning Cyclops if he truly believes that he’s fought for a better world for his family, Corsair doing the same for the bizarre grossness of Krakoa’s abilities (and its plate-cleaning bio-organic goop). 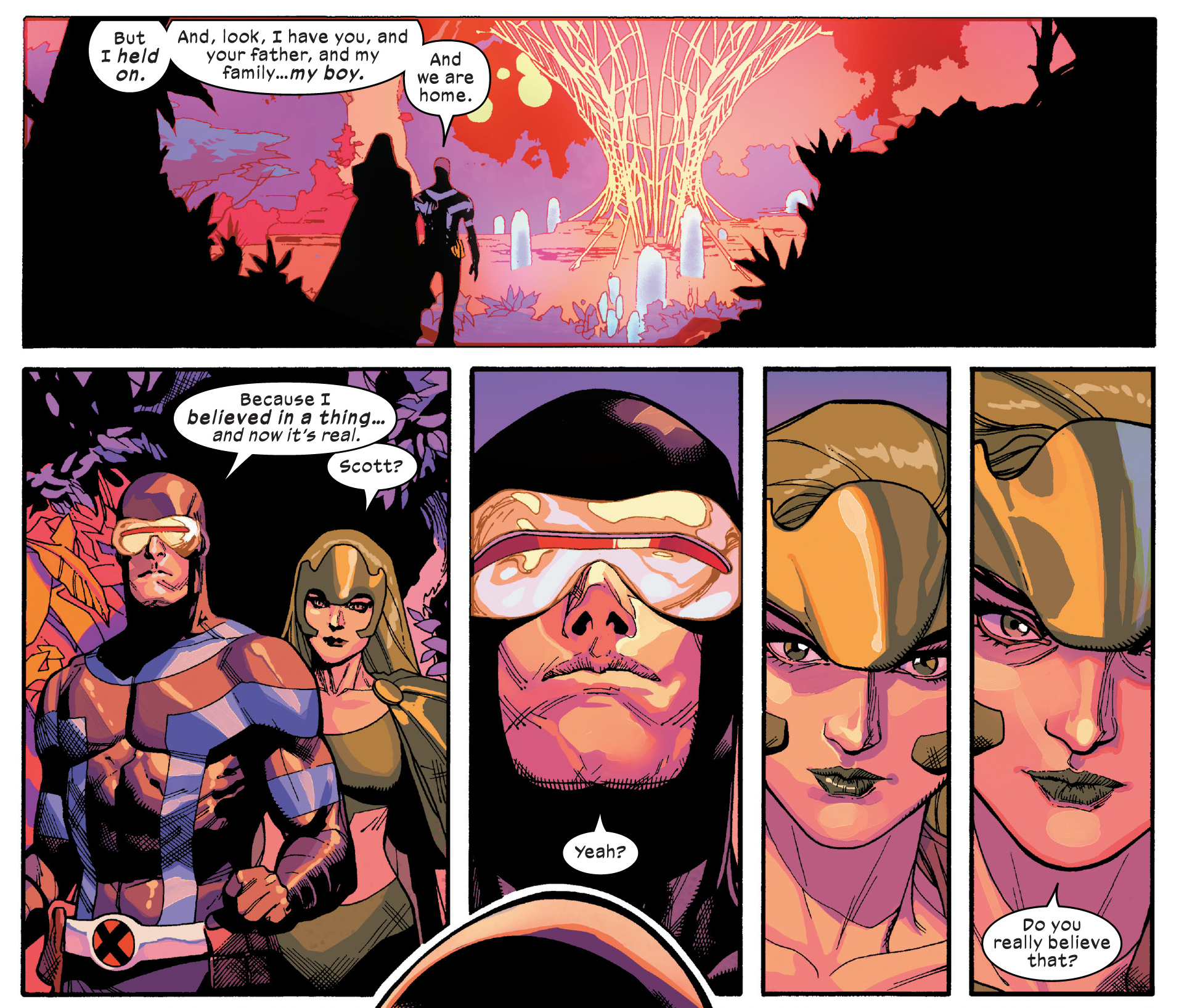 And that’s before you get into that yes, gags aside, it’s kind of creepy as hell how gung-ho Scott, Jean, and the rest of mutantkind are to get down to procreating them some new warriors for the cause. Is Krakoa a gilded paradise, or is it Gilead?

That’s not to even get into what such a mandate means for either mutants who would rather not get down to business for solely procreative purposes (or at all!) or don’t want children, or non-heteronormative members of mutant society ” whether they’re LGBTQ mutants, or mutants that cannot procreate through traditional means.

For what it’s worth, in a recent Q&A with Adventures in Poor Taste, Hickman addressed that concern by saying he believed the mandate of “Make More Mutants” was loose enough to encompass alternate methods of pregnancy like IVF or surrogacy, or adoption processes, and not strict enough to be enacted as some kind of forced process. But that’s something that has yet to be directly addressed in the text of the series itself.

But whatever ends up coming of Kurt’s mandate, this is what the X-Men are in this new Dawn. Weird. Distant. Relatably unrelatable. They just happen to bone a lot more now, too. 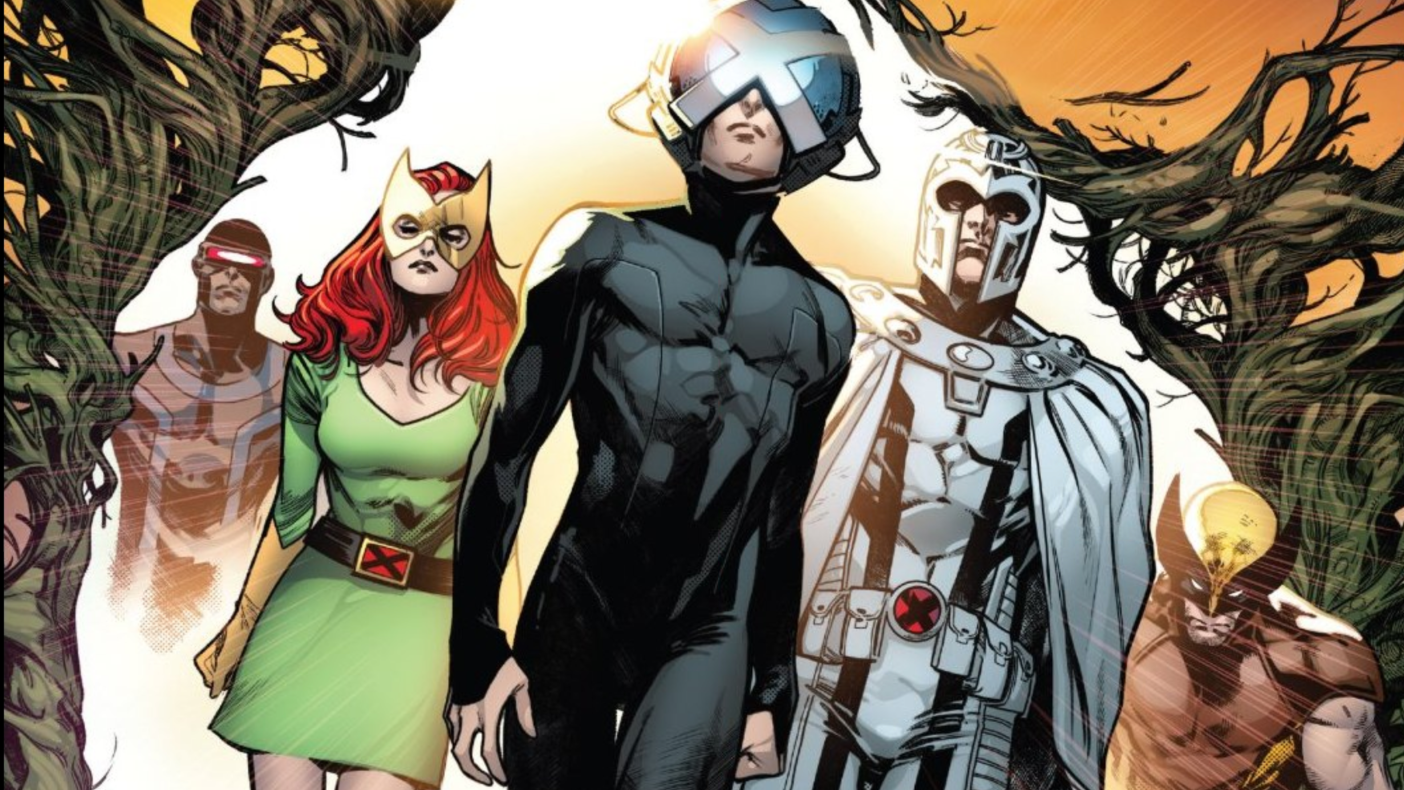 If You Like Comics, You Should Read Marvel's House Of X And Powers Of X

For the past 11 weeks, I have eagerly awaited Wednesday mornings in a way I haven't in a very long time. I'm a longtime comic book reader, and since Wednesdays are when new comics come out, I'm always a little excited