These Are The Best Worst Bootleg Game Consoles

The world is full of bootlegs: that pair of Yeezy 350 Boosts the eBay seller swore was authentic, the AirPods that don’t quite feel hefty enough you got for a killer deal, and a ridiculous, alarming amount of video games. Bad news: That Game Boy-like system that came packing every single NES title ever released and then some? You were swindled in a big way.

From “consoles” packed to the brim with “over 1000 games” that resemble the original systems’ controllers to earnest handheld devices that look so similar to the real thing that it fooled grandma, there’s a bustling market for fakes and knock-offs. There are decent knock-offs, and there are absolutely horrendous ones that feel nearly blasphemous in their attempts at offering a product even remotely similar to the original.

After sifting through dozens of different bootleg consoles—a seemingly endless sea of items that continues to add to its repertoire as the days stretch on—it was easy to label some of the most egregious copycats out on (and off) of the markets over the last few decades. Chances are you, you’ve likely seen one or several of them while shopping for the real thing. 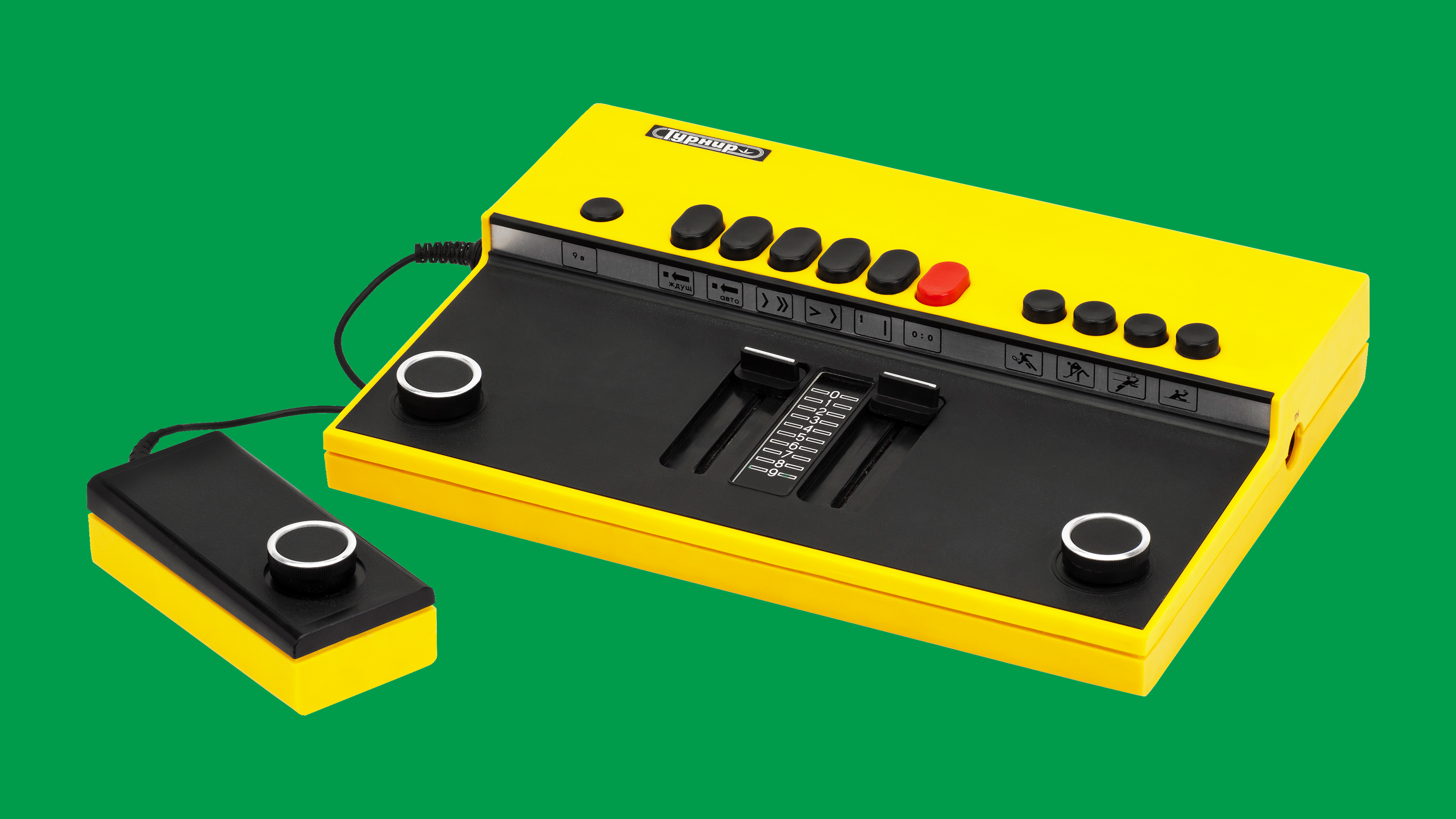 Console cloning has been around as early as the first generation of video game consoles back in the ‘70s and ‘80s. Atari’s successful home port of Pong (after the company first introduced the game via arcade cabinet) was, in fact, a clone of the basic ping-pong game that the Magnavox Odyssey featured in its lineup. However, most people couldn’t tell you which came first without doing a little research.

The company actually ended up taking legal action against Atari for its Pong devices, which culminated in a settlement. But while Atari had taken Magnavox’s ideas and ran with them for an even better, more refined take on a massive popular game, the home console market saw rapid expansion with a ridiculous number of “Pong” machines and, as such, some of the first “bootleg” consoles on the market.

The Russian “Tournament” Pong console sprang up, a garish yellow monstrosity with a laughably short controller. So too did Inter Electronica S.A.’s Overkal, another Pong console meant too fool Spanish market customers into getting what they likely thought was the real thing. Pong consoles were a favourite for a litany of bootleg manufacturers who piggybacked off of the Magnavox Odyssey’s original design as well as the original Atari Pong home console.

These similar consoles would also take older console internals and re-house them in new external enclosures for resale, promising better graphics and improved performance in many situations. While obviously there was little to copy or infringe upon beyond the singular Pong game in these instances, the entire bootleg market comprised of hardware created to capitalise on consumers obviously confused by the entire rigmarole of which hardware was the “real” setup and which was the fake. 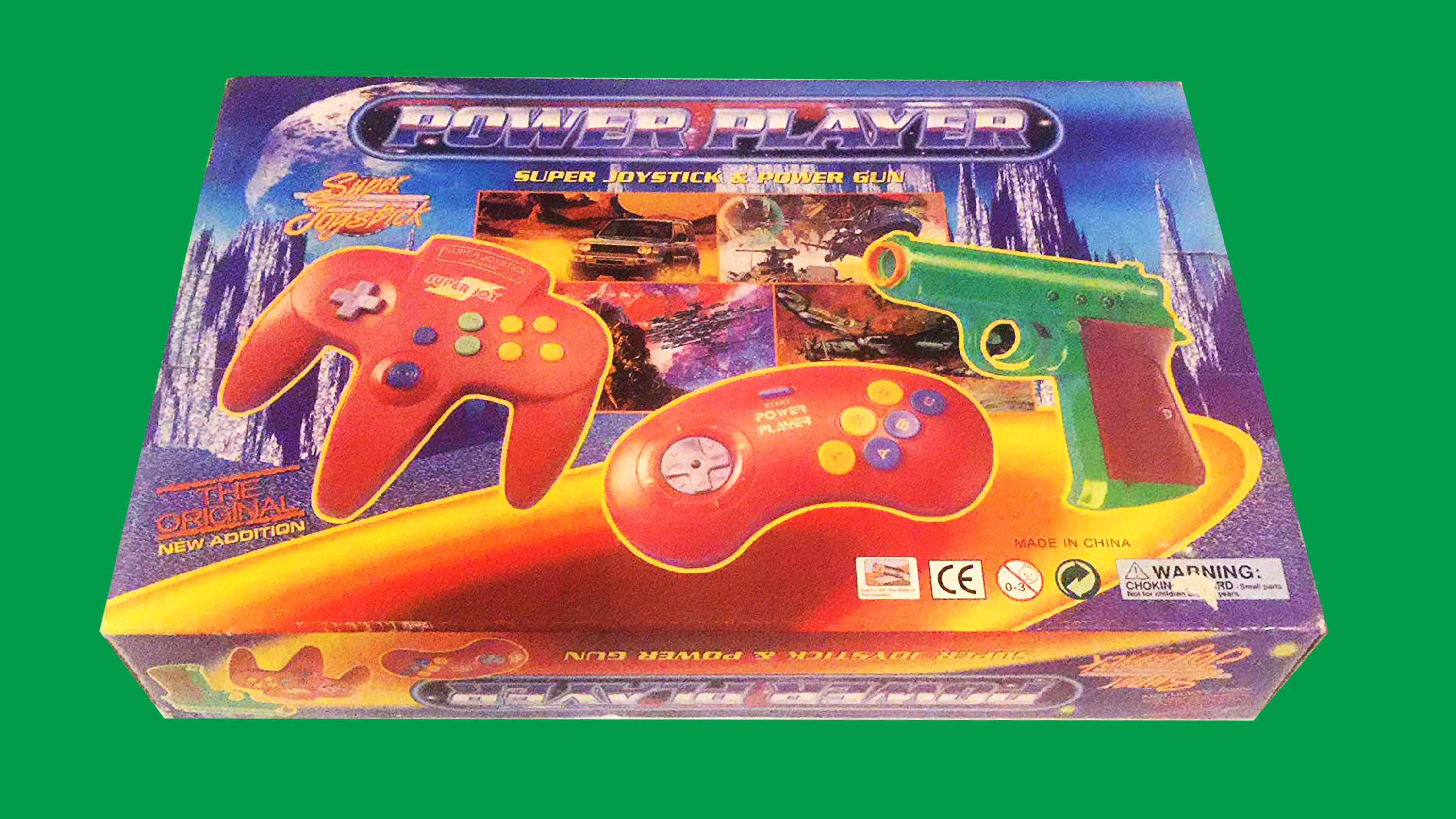 When it comes to video game fakes, the Power Player Super Joy III is just about as brazen as it gets. Part of a particularly egregious line of video game console clones, the main Power Player retail package collects a ridiculous amount of games on one device that didn’t look anything like a legitimate product. Hilariously, it still worked well enough to be a popular gift item that you can still find for sale if you look hard enough.

The unit itself resembles a Nintendo 64 controller, but it also comes packaged with a 9-pin, 6-button controller that resembles a Sega Genesis gamepad. Bizarrely, it also typically comes with a realistic light gun modelled after a Walther PPK. But the aesthetics of each product are where the similarities to their visual counterparts cease.

There are “76,000 titles” supposedly on board, but what it really breaks down to is largely the same several titles scattered throughout a ridiculous amount of menu pages. Duck Hunt, Super Mario Bros., and Clu Clu Land are on board to name a few, and the system can boot up and work reliably by way of component cables. The light gun, while exceedingly clicky, is functional as well.

Obviously, this strange console has no way to play the Nintendo 64 titles its outer casing would have you believe it plays—and has an even stranger back story to go with it. Intriguingly enough, the Power Player was the subject of Nintendo’s ire when the company caught wind of the Power Player’s existence. Fifteen years ago on December 16, 2004, the FBI conducted a search of two kiosks at the Mall of America in Minnesota as well as the personal storage unit belonging to seller Yonathan Cohen, one particularly successful seller who dealt in moving Power Player units.

Nearly 2,000 Power Player units were confiscated as part of the sting operation, each with over 76 copyrighted video games that were being sold without proper licensing or credentials. As such, given that Cohen had been selling the systems at $45 to $100 apiece, he was charged in January 2005 with federal criminal infringement of copyright in the U.S. for selling the systems. He plead guilty in April 2005 to the crime of selling counterfeit games, and in 2005 was sentenced to five years in prison.

While production has officially ceased given one peddler’s cautionary tale against their distribution and sale, you can still find these units at locations like flea markets and thrift stores, which is actually how I ended up procuring one of my own in the early 2000s. Hilariously, there’s a listing on Amazon for the product, but no sellers available to buy it. 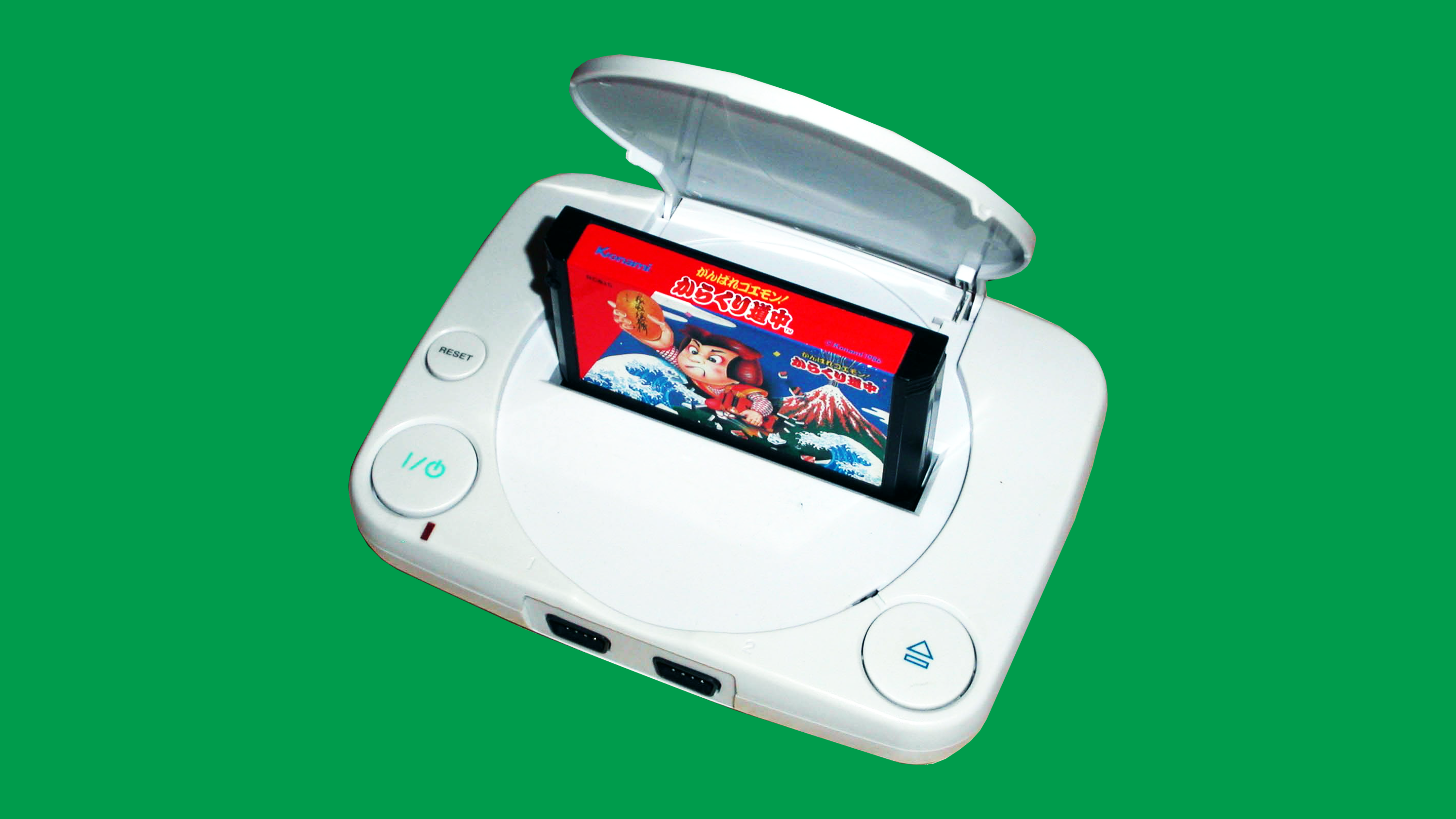 The PolyStation had it all, truly—it looked almost exactly like the products it was trying to mimic, played terrible games, and had the capability to truly fool others. This bizarre bootleg went for it in terms of aping the PlayStation’s original packaging, even going so far as to mimic the PSone’s shape.

Despite not being able to play any PlayStation titles whatsoever and actually being classified as a “Famiclone,” it nailed the “gamer” aesthetic, but failed in nearly every other conceivable aspect—unless you were, perhaps, an unsuspecting parent or grandparent looking to grab a fun gift for your children or grandchildren.

The PolyStation line comes in a variety of different iterations, including those that resemble PlayStation 2 consoles as well as PlayStation 3 systems and newer. As far as the external hardware, the system is actually quite close to the real thing, at least to the untrained eye. As it originates from China, little is known about its manufacturer nor if new versions continue to be sold. However, it’s been found South America, the U.S., and other locations around the world.

While most bootleg systems are content to include only a cartridge slot for the “games” to be inserted in, some models of the PolyStation are actually meant to be utilised as handheld console, oddly enough. However, despite what the outside packaging and shell looks like, no variation of the system has been reported to play anything other than titles from the 8-bit era.

Its packaging shows PlayStation titles and even more advanced games, which is frankly pretty brazen considering the type of hardware you actually get. Think of how many poor, unsuspecting buyers were duped into believing they were actually getting a new video game console at a fraction of the price, only to find out that it was a glorified, unofficial NES with games—Gex, Mortal Kombat Trilogy, or even the movie Titanic—that didn’t even work properly.

Perhaps buyers would simply have been better off buying something like the Power Player Super Joy in the end—at least the jankiness wasn’t even trying to be hidden away there.

As if it weren’t enough to try and fool potential customers into buying bizarre pieces like the Power Player Super Joy III or the PolyStation (nice try with that name), there have been other, particularly egregious bootleg console releases over the years.

Take the OneStation, for example, a strange handheld console that was meant to mimic iterations of the Game Boy Advance. As such, it even had its own special cartridges that could play a variety of games. Several “multicarts,” which included a variety of NES and SNES titles on each, were produced or the system. There was even a special adaptor created later in the product’s life cycle that allowed it to utilise “MD MAX” cartridges, transforming it into a Mega Drive (Sega Genesis) ROM station as well.

JungleTac apparently meant for the OneStation to eventually play even more titles. There were plans on the packaging as well as JungleTac’s customer-facing website (yes, they even made a website) to include digital TV options, a GPS, MP3 player, SD card reader, and more. Out of these expansions, only an MP3 player agent was ever created. It’s unclear how this thing worked so well without an internal processor and such shoddy construction, but it worked well enough to offer Game Boy Advance-level games, at least.

While the OneStation tried to tackle the days of Game Boy Advance titles, however, the Mini Game Anniversary Edition did its best to capitalise on gamers looking to buy a sold-out NES Classic Edition. Another “Famiclone” created in China, everything from the box art to the product and its controllers are meant to channel the original NES. However, the Power and Reset buttons are swapped as well as the NES controller ports.

It also contains another 620-in-1 multicart with a ton of titles, many of them unplayable or otherwise hacked. What better way to capitalise on the console market than by piggybacking on current trends by way of terrible, mangled ROMs of classic games thrown on a multicart with mimic packaging? Good one, China.

Brittany Vincent has covered gaming, anime, tech, and entertainment for over a decade.