Warsaw Is A Tedious Take On Darkest Dungeon

Warsaw, released on Steam last week by Polish developers Pixelated Milk, is a difficult, turn-based dungeon-crawler set in the eponymous capital city at the tail end of World War II. My first few hours with it were spent vacillating between admiration for its unique setting and frustration with its combat and squad-building mechanics. The irritants only compounded after being constantly reminded of Darkest Dungeon, a better game from which Warsaw draws much of its inspiration.

I sat down with Warsaw intent to separate it from its clear and obvious riffing on the Darkest Dungeon formula as much as possible. Sure, I was navigating an ill-equipped group of pseudo-soldiers drawn with stark, black outlines through even starker circumstances, but I was doing so in the embattled streets of an eastern European capital rather than dank prisons and bubbling swamps full of macabre, otherworldly foes.

Warsaw forces the player to battle just as much with the environment as with enemy combatants, but the grounded narrative made it feel that much more intense at first blush. That said, it wasn’t always possible to ignore the game’s influences.

By 1944, Poland had been devastated. Invasions by both Hitler’s Germany and Stalin’s Soviet Union had marred both city and countryside with the scourge of warfare, and what was left of Polish leadership operated out of Great Britain, a government-in-exile with little real power of which to speak. Still, there remained a dedicated resistance force on Polish soil, and Warsaw opens with these underground armies ready to strike back as German and Soviet forces themselves come to blows. The future of Poland rests in the player’s hands.

I was dropped into the city of Warsaw and immediately put in control of a small squad of resistance fighters that included a medic, a rifleman, and a swarthy black marketeer armed with a machine gun. I would find out later, through a dedicated codex full of background information, that none of my soldiers had any formal training. These were normal folk, pushed to action by desperation. They were fighting because fighting was the only option they had left.

While the tutorial missions were designed to offer only a slight challenge compared to the rest of the game, I quickly felt weighed down by the realities these characters faced. Every missed shot on a Nazi soldier, eyes hidden and faces permanently grimaced, opened the possibility for a violent response on one of my untrained recruits.

The battles in Warsaw take place on a grid separated down the middle, with one side for the player’s group of soldiers and the other occupied by the enemy. Unlike Darkest Dungeon, where the player’s party is organised in a single-file line, Warsaw adds another row to create a two-by-four grid which, again, is mirrored on the opposite side of the battlefield. The game then uses this grid to restrict skill usage to specific spaces on the battlefield, and many can only hit specific areas on the corresponding enemy grid. 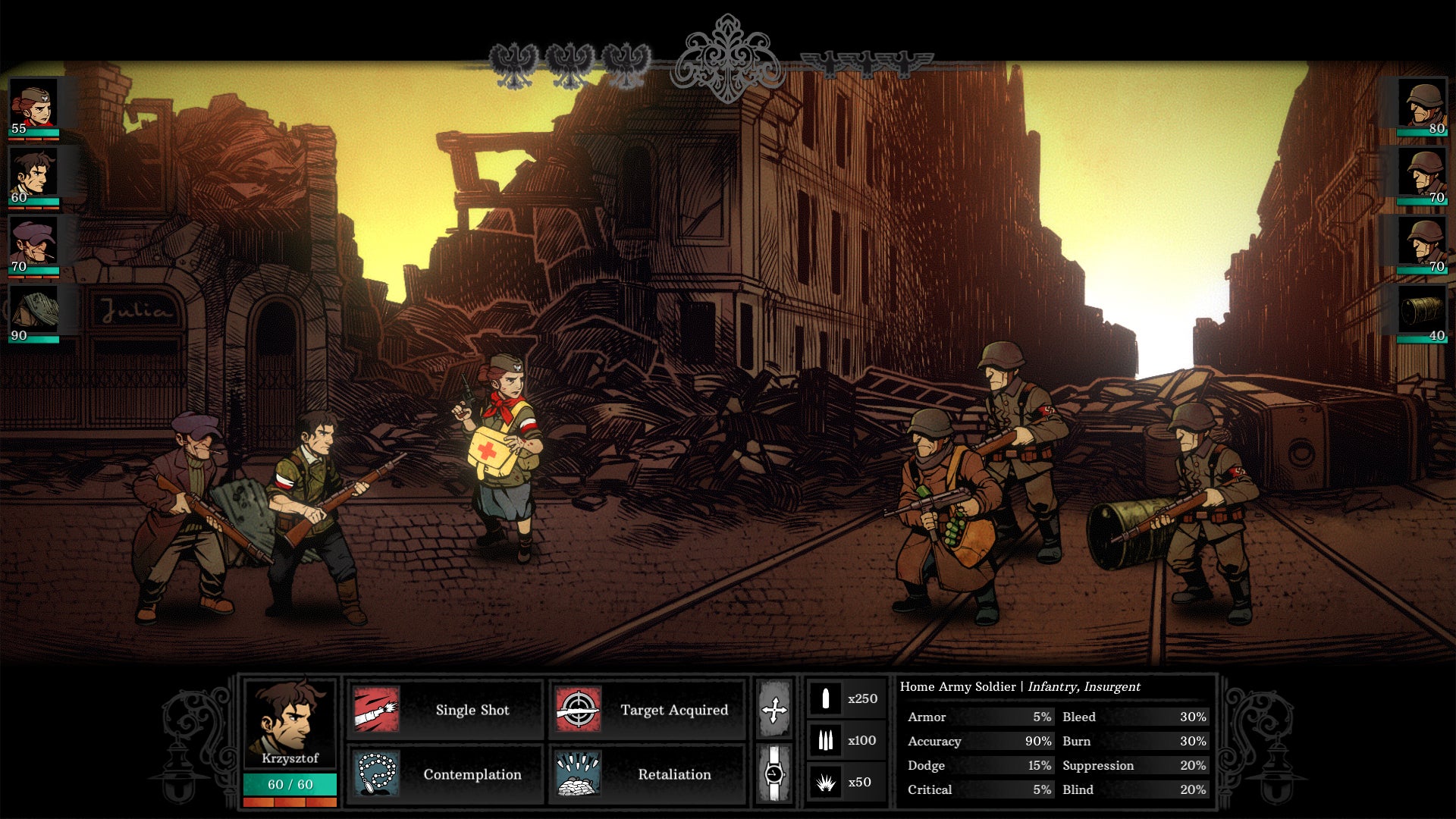 It might be tempting to ask your rifleman to take numerous shots at a dangerous target on the opposite side, but his accuracy is going to suffer, and he’ll eventually start taking more damage from incoming attacks.

Another clear departure from Darkest Dungeon is the introduction of cover mechanics. Random barricades will sometimes be placed on either side of the battlefield, allowing soldiers to take cover and find a little bit of protection in the chaos. Damaging enemies often revolves around bypassing some of the shielding offered by barrels and stacks of wooden crates, but near the end of battles it can become a huge nuisance as you try to finish off a single enemy hiding behind an obstacle.

These inanimate objects also have HP of their own, so if lady luck decides to ignore you, it’s easy to find oneself having to chip away at a sheet of aluminium siding before gaining a clear shot at the Nazi behind it.

Outside of fights, you navigate the war-torn streets of Warsaw from an overhead view, the sounds of explosives in the distance and bullets zipping from building to building. While I was given a very vague idea of objectives in the immediate area, I was mostly flying blind through the first few missions, and more than a few times I was ambushed by German and Soviet patrols before I even realised what was happening. As such, it became crucial to slowly inch from alleyway to alleyway in search of necessary supplies and enemy placements.

The map also includes a variety of non-combat events. One time, I stumbled upon a group of Jewish children who had somehow avoided being rounded up by the Nazis. Their leader, not much older than 13 or 14, had just shot a man, and was now aiming her pistol at my party, obviously distrustful of anyone digging through the remains of her broken neighbourhood.

It was then that I was given several ways to engage with these children, revolving around stats like Charm and Academics. Seeing as how I still had the black-market merchant with me, wise in the ways of bargaining, I tasked him with speaking warmly to the kids in the hopes they would allow us to go by without any violence. The game told me he had an 80 per cent chance of success. He failed, and got plugged in the guts for his efforts, the children escaping into the rubble as the rest of my squad tended to his wounds. 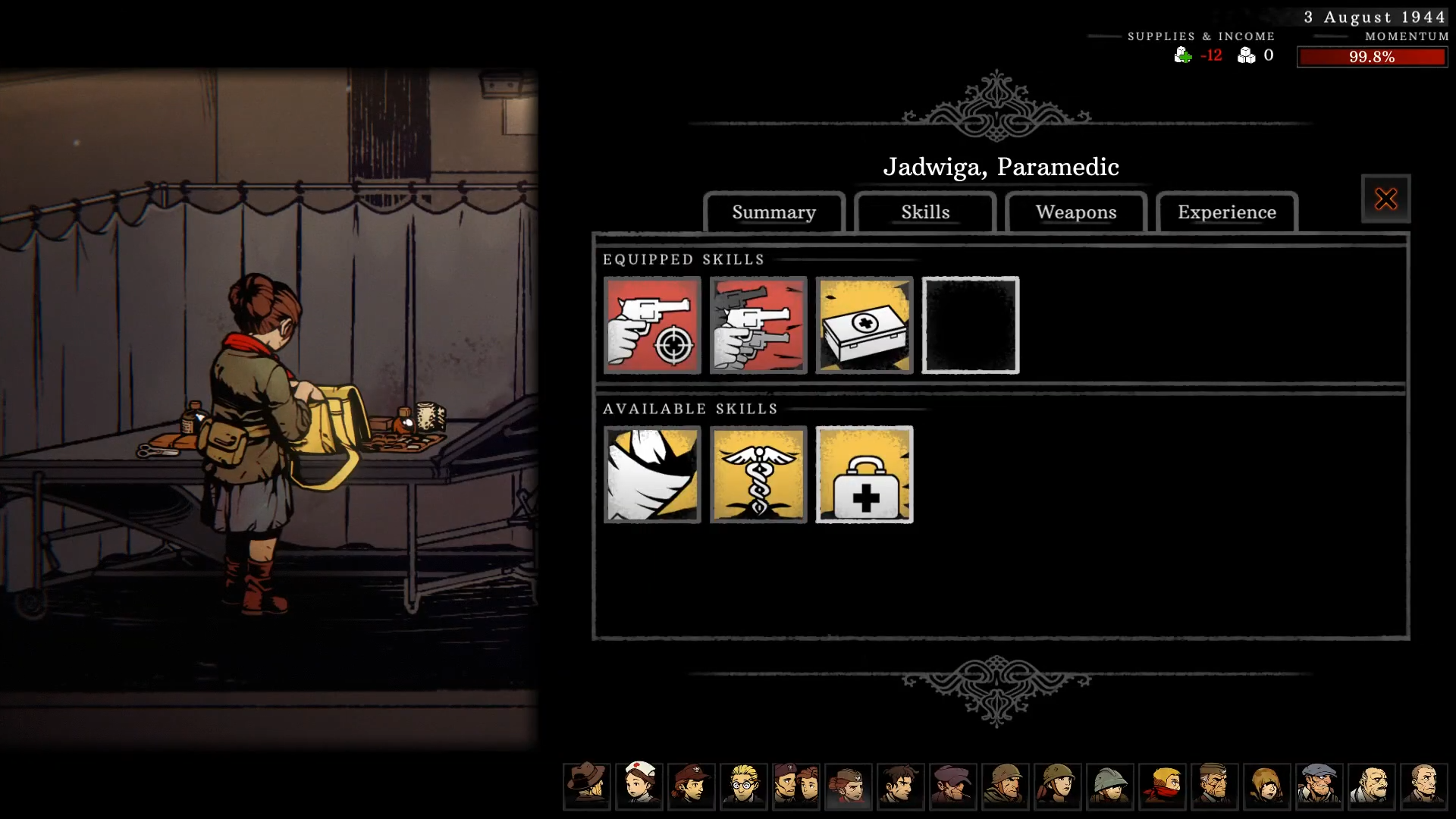 Resistance soldiers can be customised with new skills and weaponry (Screenshot: Warsaw)

Surviving in Warsaw is often predicated upon what you do between excursions into the devastated city. The home base provides a chance to heal wounded soldiers, gather necessary supplies, and recruit more fighters.

The most competent fighters have so far been locked away behind the random events that can occur upon returning to the base, while those that can be conscripted en masse offer only a few randomised skills and cannot be leveled up. My early hours were often spent juggling between my named soldiers and the weaker counterparts I had spent precious supplies to recruit.

Add to that the fact that any healing you manage to whip up on the battlefield is meaningless upon returning to base — soldier health returns to the lowest point it reached during the previous mission — and putting together a viable mission team can be a constant headache.

Darkest Dungeon at least provided players with a constant stream of new warriors with which to build parties, but in Warsaw, you begin to depend on the few skilled soldiers in your army while simultaneously being told by the mechanics that everyone is expendable. It’s a bleak system that, at times, is so overwhelmingly oppressive that I have to wonder if this was an intentional statement on the status of the Polish resistance at the time rather than an unfortunate misstep on the developer’s part.

Warsaw has all the building blocks of a great game, but these are borrowed wholesale from a more polished one. When it diverges from the blueprints first authored by Darkest Dungeon, it suffers. It’s not that I wish Warsaw was more like Darkest Dungeon, but its attempts to set itself apart from the game it so obviously remixes result in a tedious, confusing, and ultimately frustrating experience that takes away from its exceptional setting and world-building.

Underneath the layers of homage and allusion, Warsaw has something special. It’s just going to take a little more work to draw it out.