The most important thing about Disco Elysium, an oddly titled role-playing game that came out last month for PC, is that it’s funny. Set in a beautifully ugly world of smudged watercolours and throbbing noir music, Disco Elysium appears at first to be the type of game that might take itself too seriously. It seems nihilistic, dropping not-so-subtle messages that its writers believe everything sucks. Fascists bombed the city. The union leaders are corrupt. The cops are jerks. But there’s a warmth to the game that reveals itself over time, largely thanks to its fantastic sense of humour. Following a branch of dialogue is just as likely to lead to a long-winded treatise about communist philosophy as it is to result in your character dying from a heart attack because he got exhausted trying to remove his tie from a ceiling fan.

Disco Elysium is best described as a cross between the seminal role-playing game Planescape: Torment and a LucasArts point-n-click adventure like, say, Monkey Island. It’s an isometric RPG, complete with stats and equipment, but rather than battle guards and monsters, you have conversations. Trials are resolved through dialogue options rather than combat. Many of those dialogue options are locked behind Dungeons & Dragons-style dice rolls—failing, say, an Empathy check will make it tough to understand what someone is thinking—but most of this game is about reading oodles and oodles of text.

It’s less traditional RPG, more visual novel. Perhaps the gamiest thing about Disco Elysium is a pair of life meters—one for health, one for morale—which will tick down when you, say, kick a mailbox, or drunkenly embarrass yourself. You can pick up restorative items for both meters, and if either of them drains, you’ll get a game over. But all you’ve really got is text.

The good news is that all the text is fantastic. Your character, an alcoholic mess who wakes up with no recollection of his past, quickly learns that he’s a detective who’s been tasked with investigating a murder in the decrepit city of Revachol. “Become a hero or an absolute disaster of a human being,” offers Disco Elysium’s marketing slogan, but it’s difficult to avoid the latter. Whether you’re trying to make amends with colleagues whose names you’ve forgotten or attempting to convince a smarmy union leader to help you find your missing gun, chances are high you’ll fall on your face.

Early in my playthrough, for example, I encountered a teenage tweaker named Cuno with red hair and a penchant for foul insults. In order to show dominance and get Cuno to stop throwing rocks at the corpse of my murder victim, I took a swing at him, knowing that my physical strength was subpar. I failed the roll, which caused my character to deliver a glorious haymaker right into the air, toppling over and losing a health point. Cuno got a kick out of it. 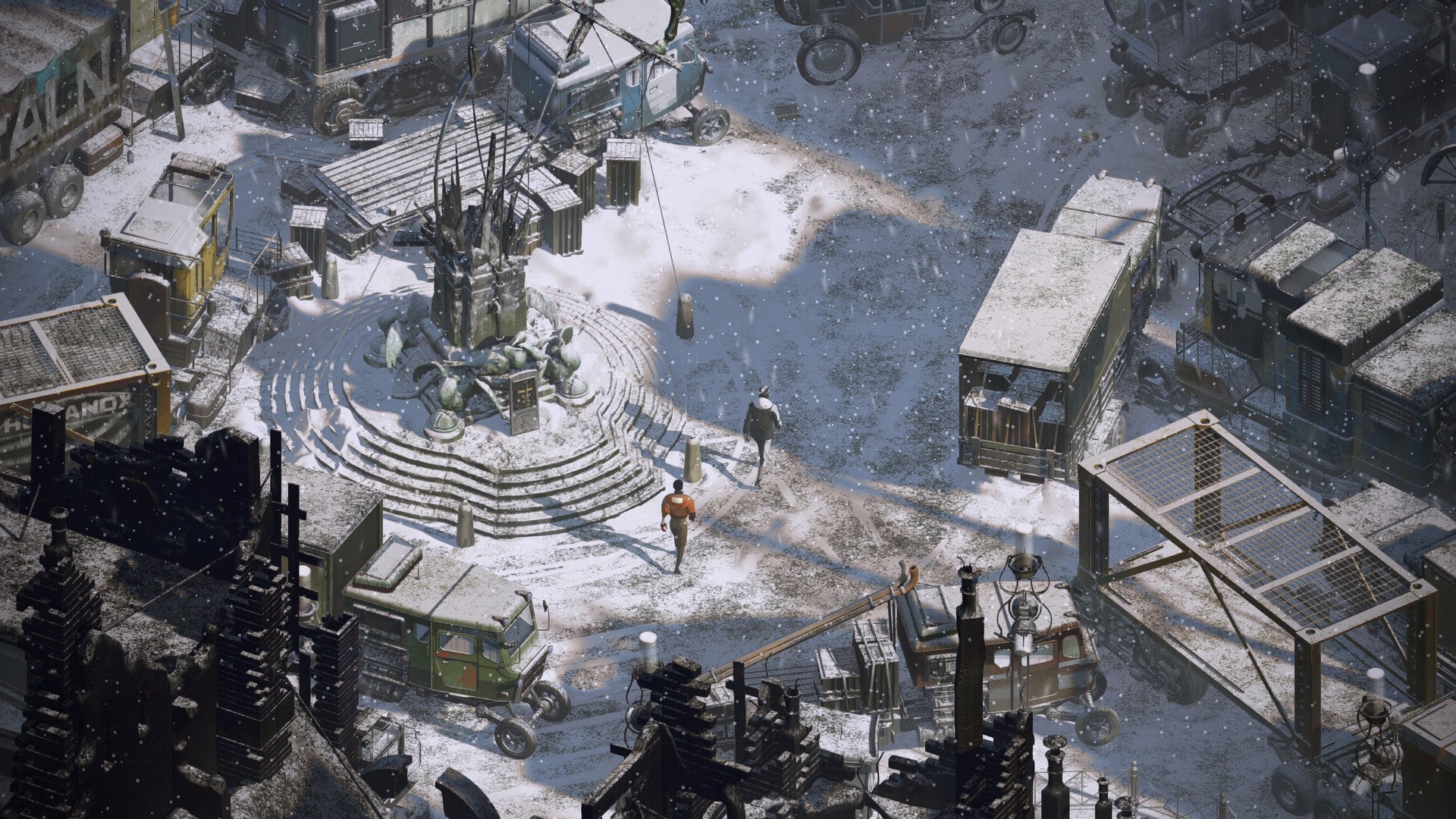 It's a shitshow at the fuck factory, sir

The final act is a little underwhelming

Completed the game in around 26 hours

An alternate-reality incarnation of my character might have connected that punch but perhaps would have lacked the mental fortitude to pass a later check and convince Cuno to chill out. If I’d made smarter decisions and succeeded at more dice rolls, I might have even persuaded him to become my junior partner and keep me company on a mission later in the game. There are maybe 30 or 40 characters in Disco Elysium, and many of them, like Cuno, are memorable, worth revisiting multiple times over the course of your investigation.

Maybe they’ve got new things to say, or maybe one of your stats will be higher and offer you a better chance at a dialogue check you failed earlier. (You can retry many stat checks every time you put a point into that stat. You get those points by gaining experience and levelling up, which happens organically as you play.)

Your stats aren’t just good for passing dialogue checks, though. Each of them is a voice inside of your character’s head, chiming in to offer commentary during conversations and dull moments. Your Electrochemistry stat, for example, will encourage you to seek out and ingest as many drugs and alcoholic beverages as you can find. Encyclopaedia will interject with lore dumps about Revachol and its history, while Drama will encourage you to lie to everyone you meet in increasingly hilarious ways.

Some of the most interesting skills are the most specific ones, like Esprit De Corps, which gives you a psychic connection to other cops, and Inland Empire, which prowls the inner depths of your imagination and comes up with all sorts of disturbing conclusions. The interplay between these skills might be the best thing about Disco Elysium, full of clever quips and hilarious moments.

The caveat is that you can’t play Disco Elysium like you might play a standard RPG. Most games with dialogue options encourage you to explore them all, with RPGs like The Witcher 3 signalling that optional text will always be white and text that advances the conversation will always be yellow. There’s no downside to asking every question and exploring every possibility. In Disco Elysium, however, even the optional dialogue can have very real consequences—ask someone about something too brusquely, for example, and you face the very real risk of shutting them down forever. Call someone a fuckhead and they might remember it every time you speak to them.

The sheer number of role-playing possibilities in Disco Elysium is mind-boggling and often overwhelming. You can play as a pinko communist, an apathetic centrist, or a fascist herb. You can miss major quests and story moments if you choose the wrong paths or don’t get to them quickly enough. (Disco Elysium unfolds over the course of about a week, with time passing only when you have conversations.)

Dialogue options that at first seem like throwaway jokes can lead to gut-wrenching quests, and people who seem delusional might reveal themselves to have the sharpest minds in Revachol. I’m still not quite sure what I could have done with the man I stumbled upon in a truck container who was so rich that he was literally glowing, but I’m glad I was able to go on a pseudo-date with that hard-boiled fisherwoman. She seemed lovely.

Later in the game, once you’ve started to understand all of Disco Elysium’s systems and you just want to see the ending through, the thrill dissipates. It becomes a little too easy to min-max the game, save-scumming or swapping out your equipment just before each skill check so you can boost your chances of passing. The final act railroads you in a way that’s disconcerting compared to the pure freedom of the rest of the game, and some of your choices don’t appear to matter quite as much as they should in the broader scheme of things. Still, this is a tremendous game, one I’d recommend to anybody who likes their games to be heavy on the text, hard-boiled, and hilarious.

There’s unexpected joy in the little moments of Disco Elysium, like trying to crack your straitlaced partner Kim Kitsuragi’s shell. Kim at first seems like the perfect foil to your antics—a frequently exasperated, by-the-book cop who wishes he hadn’t been saddled with an alcoholic, amnesiac mess. But over time it becomes clear that Kim has developed a soft spot for your hero. At one point, the two of you might find yourselves staring at the bullet-filled wall of an apartment building, the remnants of a mass execution that had been carried out decades earlier.

You might stare at the wall and nod, pensively. He’ll nod, too. You’ll nod harder. He’ll nod faster. You’ll nod furiously, and look over to see him nodding so much that he’s actually sweating. Keep nodding and you’ll actually take physical damage—maybe even enough to cause a heart attack and die—but you might earn his respect in the process. You might even get him to smile.