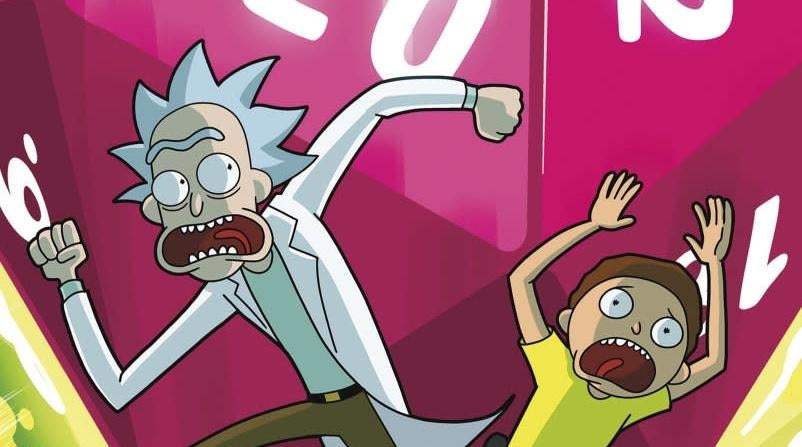 Keep on rolling... (Image: Wizards of the Coast)

Rick and Morty has returned with season four, and with it has come a bunch of corporate tie-ins. One of the latest is a Dungeons & Dragons game based on a comic book crossover series about Rickâ€™s adventures as a power-hungry Dungeon Master. It may not be the best D&D game out there, but for DMs eager to have someone encourage their worst, most-destructive instincts…welcome to your fantasy.


Dungeons & Dragons vs. Rick and Morty is the latest officially licensed D&D game from Wizards of the Coast (the previous being Stranger Things). Created by Kate Welch, a WotC game designer and Rick and Morty fan, the game has been made with new players in mind, as well as experienced players looking to take a break and try something intentionally ridiculous. It comes with Rickâ€™s custom dungeon adventure, pre-made character sheets based on avatars from the comic book, and a rule book sprinkled with notes and â€œcorrectionsâ€ from Rick Sanchez himself. Plus some dice, obviously.

Iâ€™ve had the opportunity to play Dungeons & Dragons vs. Rick and Morty twice: The first time at a playtest event, with Welch serving as the DM, and the second DMing a session at home with a few of my friends. I will also preface this by stating I know very little about Rick and Morty. Yes, thereâ€™s a pickle, and yeah there was a whole thing about McDonaldâ€™s sauce packets. But thatâ€™s about it. Donâ€™t get me wrong, I enjoy the show just fine, but Iâ€™ve only seen a small handful of episodes.

Luckily, you donâ€™t need to be an expert in the show to play the gameâ€”itâ€™s funny enough on its own. (Though you might miss out on some of the jokes. There were a few times I felt out of the loop, including as the DM.) I donâ€™t want to give any of the story away, as that would diminish its impact for players; suffice to say itâ€™s not designed to be taken seriously.

Itâ€™s a way for folks to let go and get funky with it, in a style akin to The Adventure Zone or other comical D&D podcasts. Some dungeon rooms are full of in-jokes for Rick and Morty fans, others poke fun at D&D itself, and then there are those that contain generically weird or nonsensical surprises. For example, there was one room where one of my PCs lost their butt. It didnâ€™t hurt or anything. They just…lost it somewhere!

Thereâ€™s rarely a dull moment. And if things do slow down, thereâ€™s a lot of room for the DM to stir shit up, as well as the players. Basically, if thereâ€™s ever been a time youâ€™ve wanted to try being an arsehole, this is it. The game enjoys when youâ€™re a jerk. I played an archer who was modelled after the character of Summer on the show. As I was getting into my â€œrole,â€ I found myself less interested in â€œhonour and valour,â€ and was more drawn to chaos and mischiefâ€”thanks to the tone of the game, and the show itself.

I kept getting into random power play arguments with other characters…when I wasnâ€™t trying to prank them without them knowing. It mostly worked, because Iâ€™m so smooth. Wizard Jerry is still walking around somewhere with his shoelaces tied together. But thatâ€™s only a small part of the puzzle. The truth is: Dungeons & Dragons vs. Rick and Morty is more for the DM than the player.

I typically prefer to DM over PC, because navigating different characters and their needs feels like a puzzle Iâ€™m always solving, one that keeps growing and changing. But itâ€™s not always easy, or fun. Players like to stir shit up sometimes, and you just have to roll with it. Rick has another idea: Do whatever the fuck you want. Itâ€™s your game. Are you pissed that one of your PCs keeps showboating? Curse them to be silent for 10 minutes. Did you roll a critical fail for your goblin fighter? Just lie and say it was better. They canâ€™t do shit. Iâ€™m not saying both of those things happened with my game…but Iâ€™m not saying they didnâ€™t.

That might come across as an affront to the sanctity of the relationship between player and DM, and in some ways it is. DMs are pressed with the importance of honouring the player, the story, and the journey. But Rick comes in, wand blazing, and says: â€œScrew that noise, youâ€™re God in this house.â€ There may be players who arenâ€™t comfortable with that, and thatâ€™s understandable, but that doesnâ€™t mean you shouldnâ€™t give it a try. In fact, Iâ€™d argue that you should play it for exactly that reason. Even the most stringent players and DMs need to loosen their stays for a session, if only to remind themselves of what brings them to the game in the first place. The exception proves the rule.

That doesnâ€™t mean Dungeons & Dragons vs. Rick and Morty is perfect. I did have one complaint about itâ€”apart from the book and dice quality, which were on the cheaper sideâ€”in that itâ€™s not designed for repeat play. You get the one dungeon and a few pre-made character sheets, and thatâ€™s it. There arenâ€™t any empty character sheets for you to make your own PC, nor are there suggestions for where you can take the story further after the dungeon is completed. That makes the $40 price tag feel a bit steep, as itâ€™s only worth a couple of sessions. But on the other hand, I spend $20 to see a two-hour movie, so maybe getting 10 hours of entertainment for up to six people isnâ€™t a bad deal for the price.

Itâ€™s hard to say whether Iâ€™ll play Dungeons & Dragons Rick and Morty againâ€”it would have to be with new players, ones who havenâ€™t already learned the ins and outs of Rickâ€™s dungeon. But it was great to take a break from the norm and embrace the silly, stupid fun of Dungeons & Dragons. In the world of Rick and Morty, anything is possible… everything is encouraging. And yes, thereâ€™s a pickle.