Final Fantasy VIII’s Surprise Twist Nearly Ruined It For Me 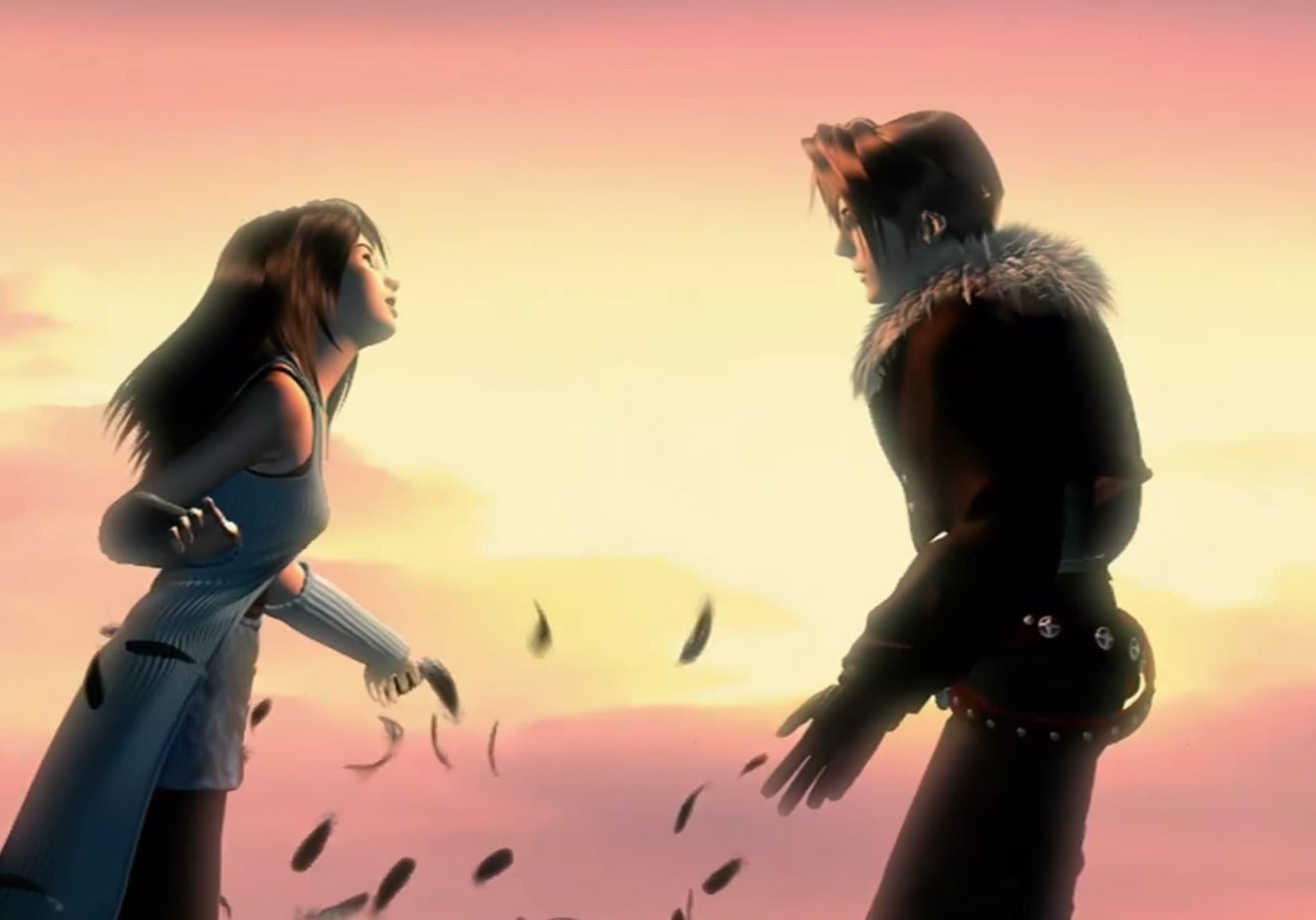 Final Fantasy VIII is easily one of the most action-packed and compelling games in the series. It was amazing when it first came out, and as I play through the recently-released remastered version, I’m enjoying it just as much. But even 20 years later, some of the choices made by FF8‘s story are still confusing.

Waltz For The Moon

In many ways, FF8 forces you as a player to unlearn almost all the basic assumptions you have about Japanese role-playing games. The game mechanics are intricate, if somewhat convoluted, and add a depth to the combat that feels unparalleled in the series. One of the most jarring aspects is that experience points and the corresponding level ups that ensue take a backseat, and even serve as a detriment, to the gameplay since enemies scale in strength the higher your level.

So grinding won’t do anything. Instead, you have to buff your stats by collecting specific magic spells and “junctioning” them. So it’s almost better to be at a lower level, but have magic spells to strengthen your stats. This also explains why boss battles give you “ability points” but no experience points. AP can be used for Guardian Forces (GFs), which are essentially summons. They become an integral part of the battles and are more important to level up then your own characters, as they unleash really powerful spells and have health meters of their own. 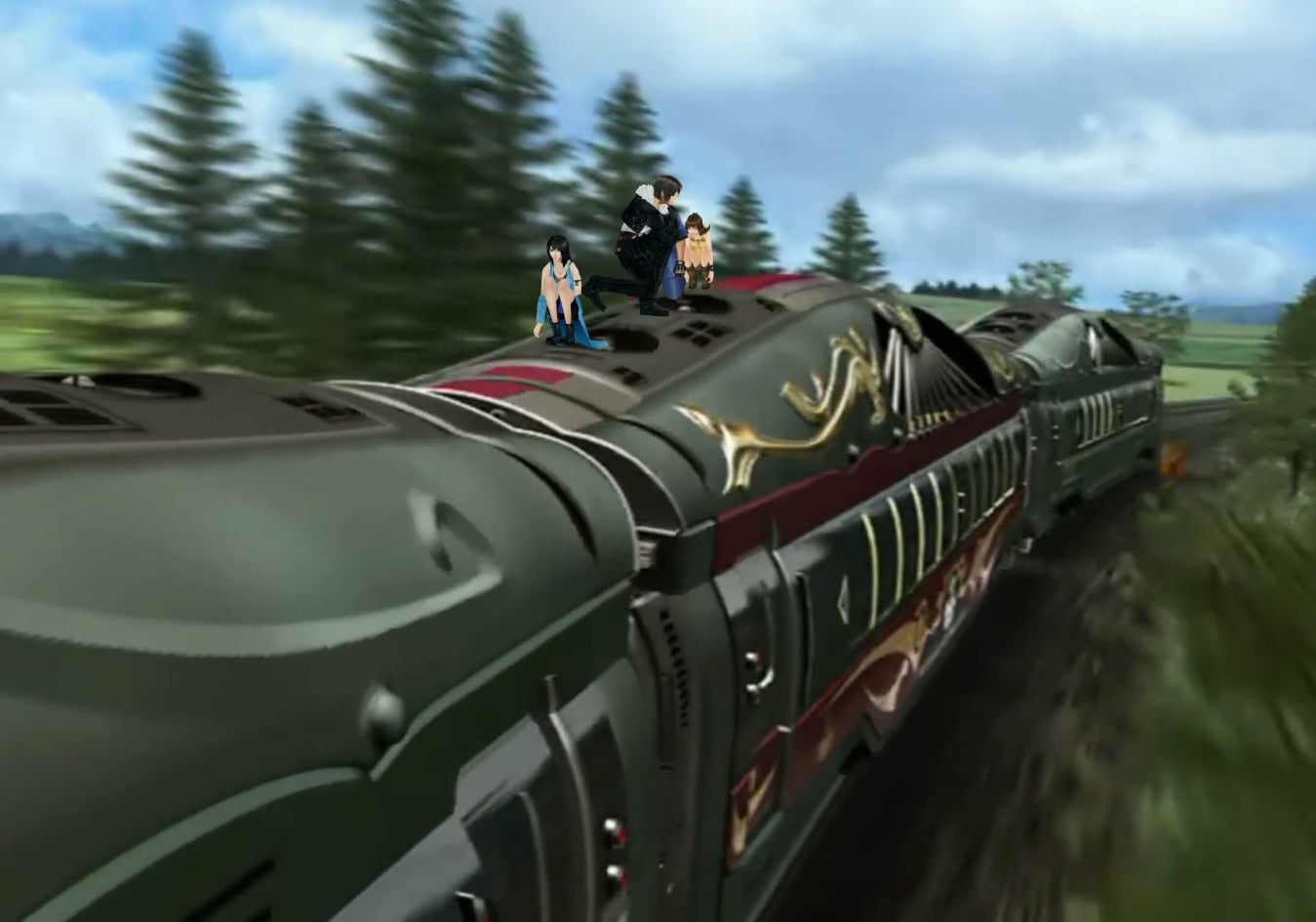 This combat system is still controversial, but it’s hard to argue about the other aspects of Final Fantasy VIII. The visuals are stunning. The mix of cutscenes that blend almost seamlessly with player control is commonplace now, but unlike anything back then. The set pieces are some of the best in the series. The train sequence in Timber is fast-paced, incorporating a nice mix of action, stealth, and music. The transformation of the satellite dish in Dollet’s Communication Tower and the ensuing battle across the entire city with the mecha spider was tense and thrilling. The entire assassination sequence with each group in their respective positions was pretty awesome, at least until the elite shooter they recruited, Irvine, choked at the most important moment. Even then, it was Squall to the rescue, rushing through the crowd to attack the sorceress, Edea, and her lackey, Seifer, all by himself. 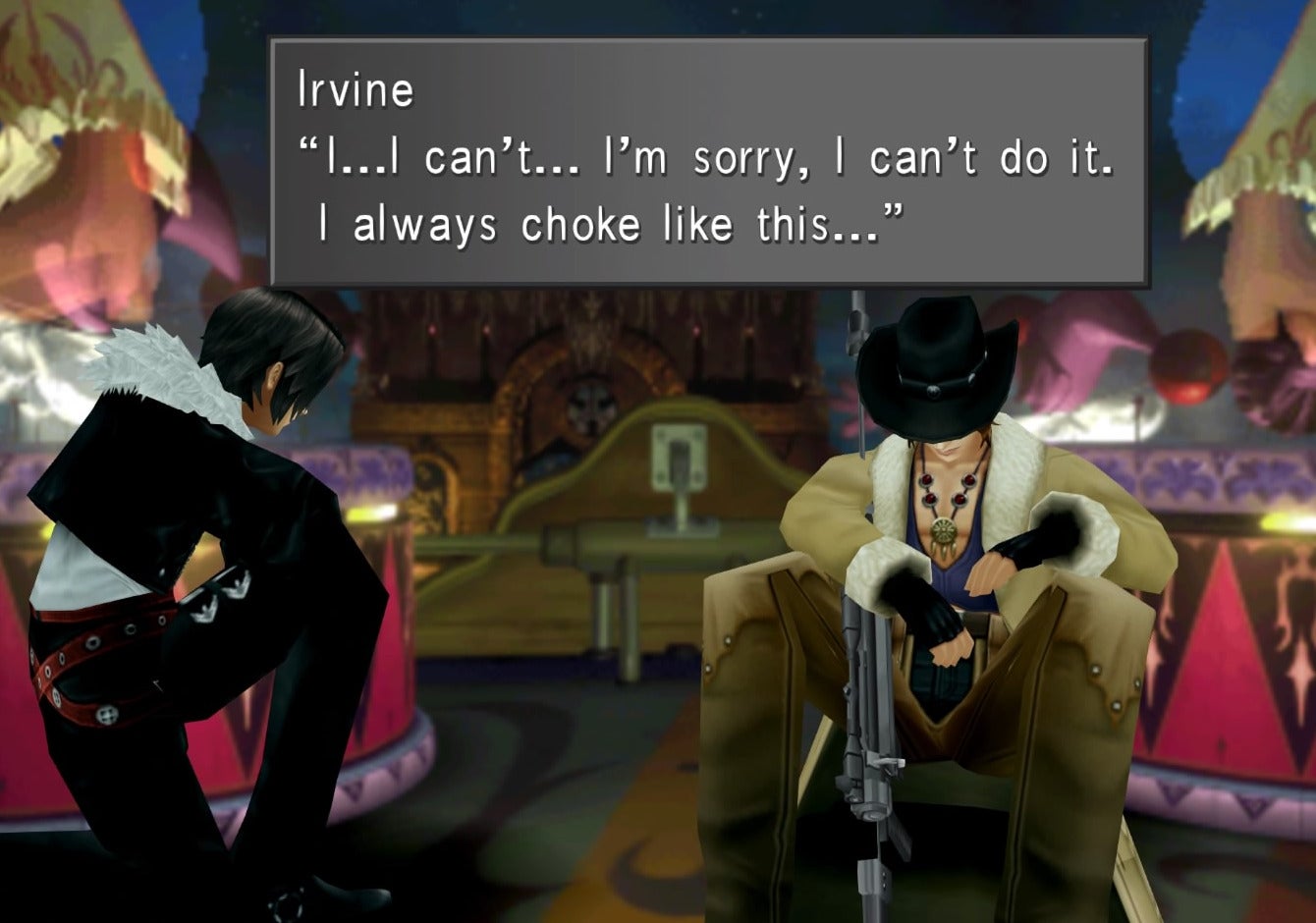 Considering all this, Final Fantasy VIII should easily be one of my favourites in the series. But certain narrative choices that happen towards the end of Disc 2 almost took me out of the game.

I’ve had mixed feelings about the story and the characters since I first played FF8. It was hard for me to empathise with any of the characters. It felt like they were squabbling all the time, especially Zell, Seifer, and Squall, which felt out of place for professional soldiers who’d been trained at one of the top military academies in the world. 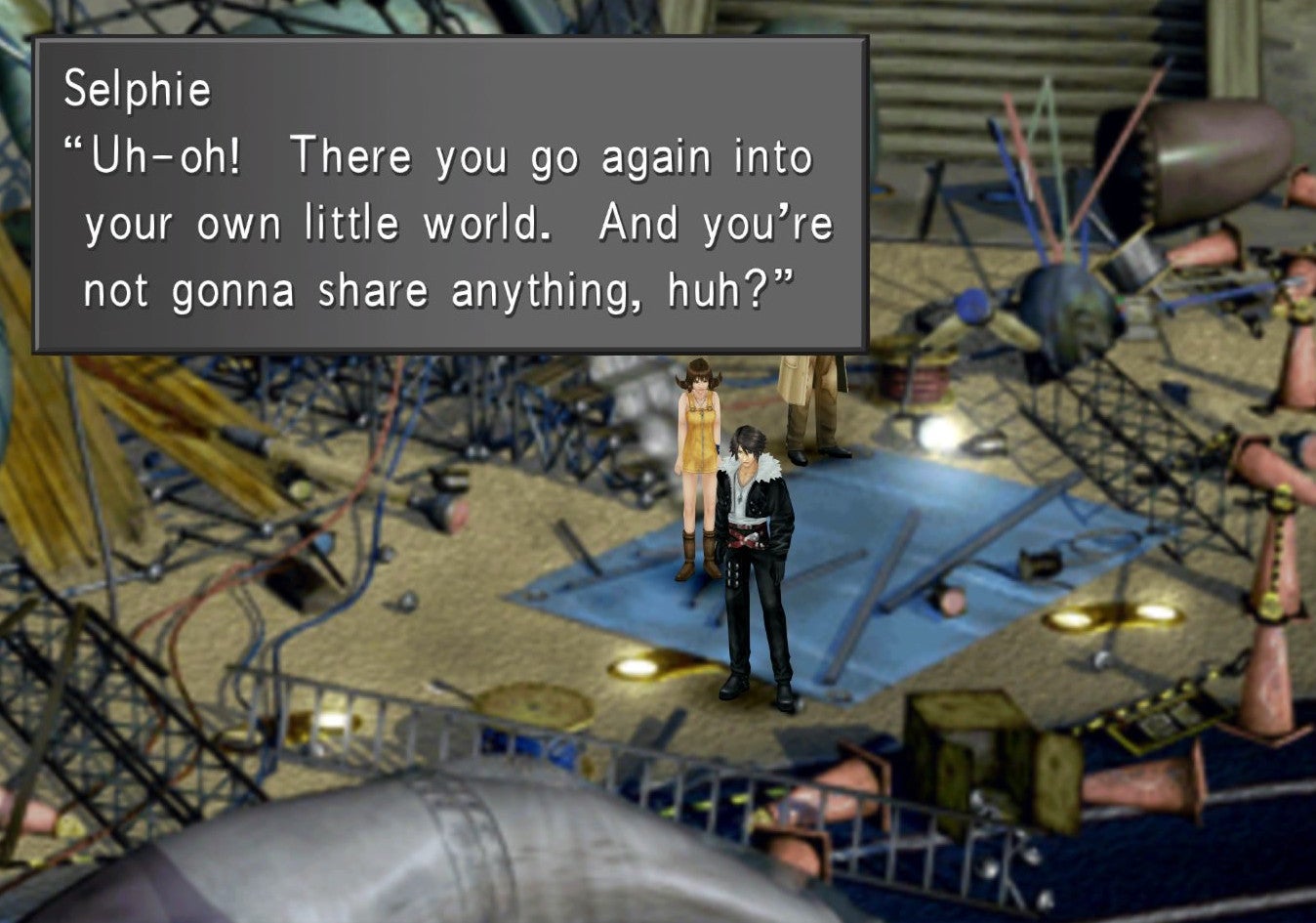 This time through, I enjoyed and understood a lot more about the characters. Squall’s broodiness grew on me, as did his evolution from distant loner to a leader of the SeeD. While some of their arguments still seemed silly, especially during military operations, there was a charm and youthfulness to it that added dramatic tension to the scenes. Plus, anytime anyone acted up, someone else (usually Quistis) was there to call them out on it. They’re a young, teenage group, full of angst, facing extremely difficult situations, so a little childishness here and there is understandable. 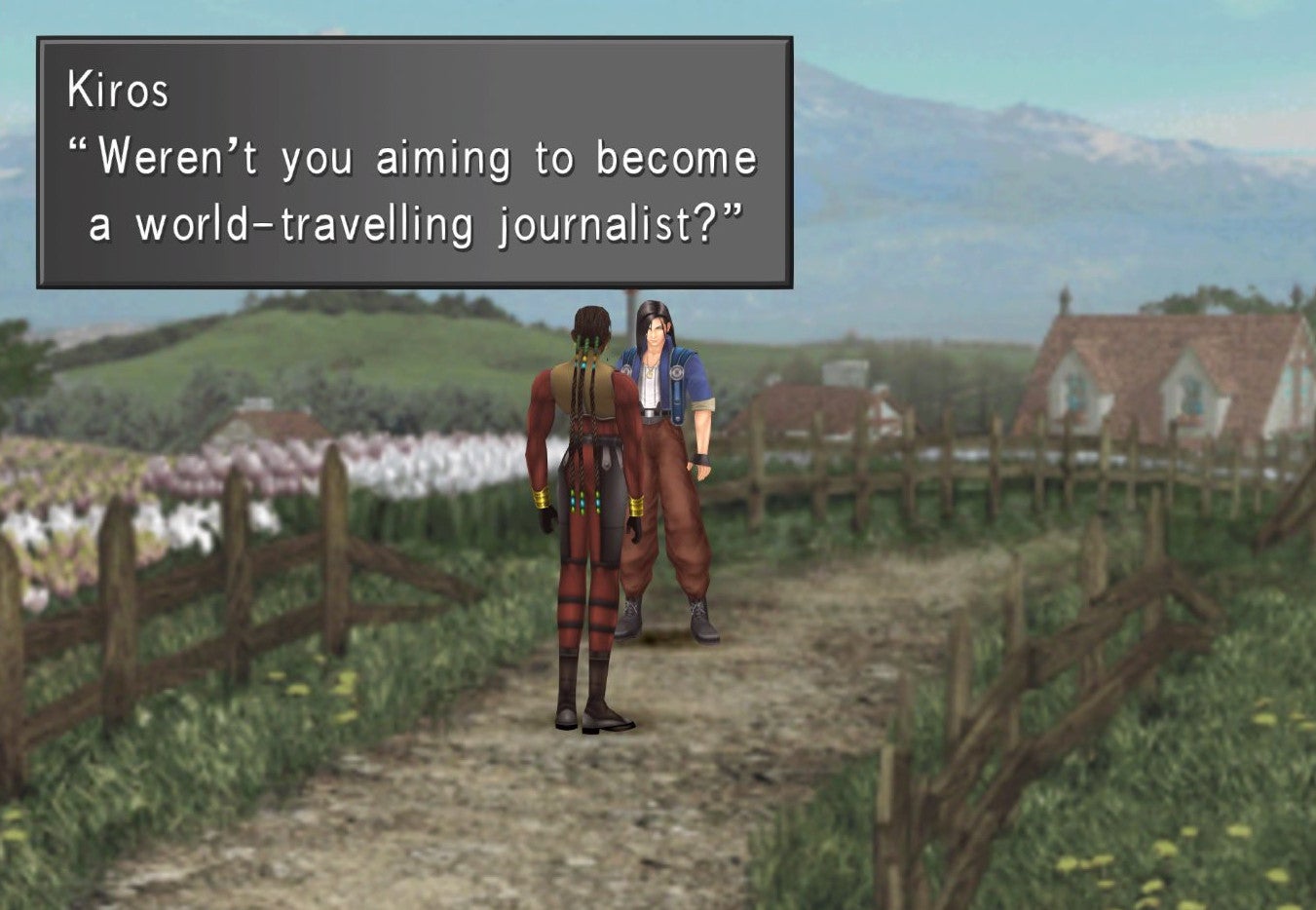 I even had a deeper appreciation for Laguna’s flashback sequences this time around. The first time through, I had been hoping that the flashbacks would have a deeper connection with the overall narrative. But I realised the developers went for a subtler emotional impact, with the earlier sequences showing Laguna’s soldier days and the latter scenes depicting how he and his friends have changed with age. There is a sad sense of nostalgia when Kiros visits Laguna in Winhill and they’re talking about their past and what’s happened to their friends. This juxtaposes with Squall and his fellow SeeD, showing how people’s choices cause their fates to go in unexpected ways. It’s heavily implied that Laguna is Squall’s father, so in some ways, the flashbacks are Squall’s chance to walk in his dad’s shoes and understand why he got to where he did. Again, all powerful stuff, especially on this new run.

The part that bugged me the most and nearly ruined the experience is the game’s odd use of amnesia as a narrative choice. I realise it’s something that happens in most Final Fantasy games. In FFIV, the dark knight, Cecil, doesn’t remember his past, and figuring that out is a big part of the game. In FFV, Galuf suffers from amnesia and retrieving his memories is a key part of figuring out the evil machinations of the villain, Exdeath. FFVI’s Terra had a mysterious background that is a key part of the plot, as Kefka is trying to use her powers for his insidious purposes. Cloud from Final Fantasy VII has an identity crisis due to his past conflict with Sephiroth, and his arc of remembering the correct past is what has made the game a classic. 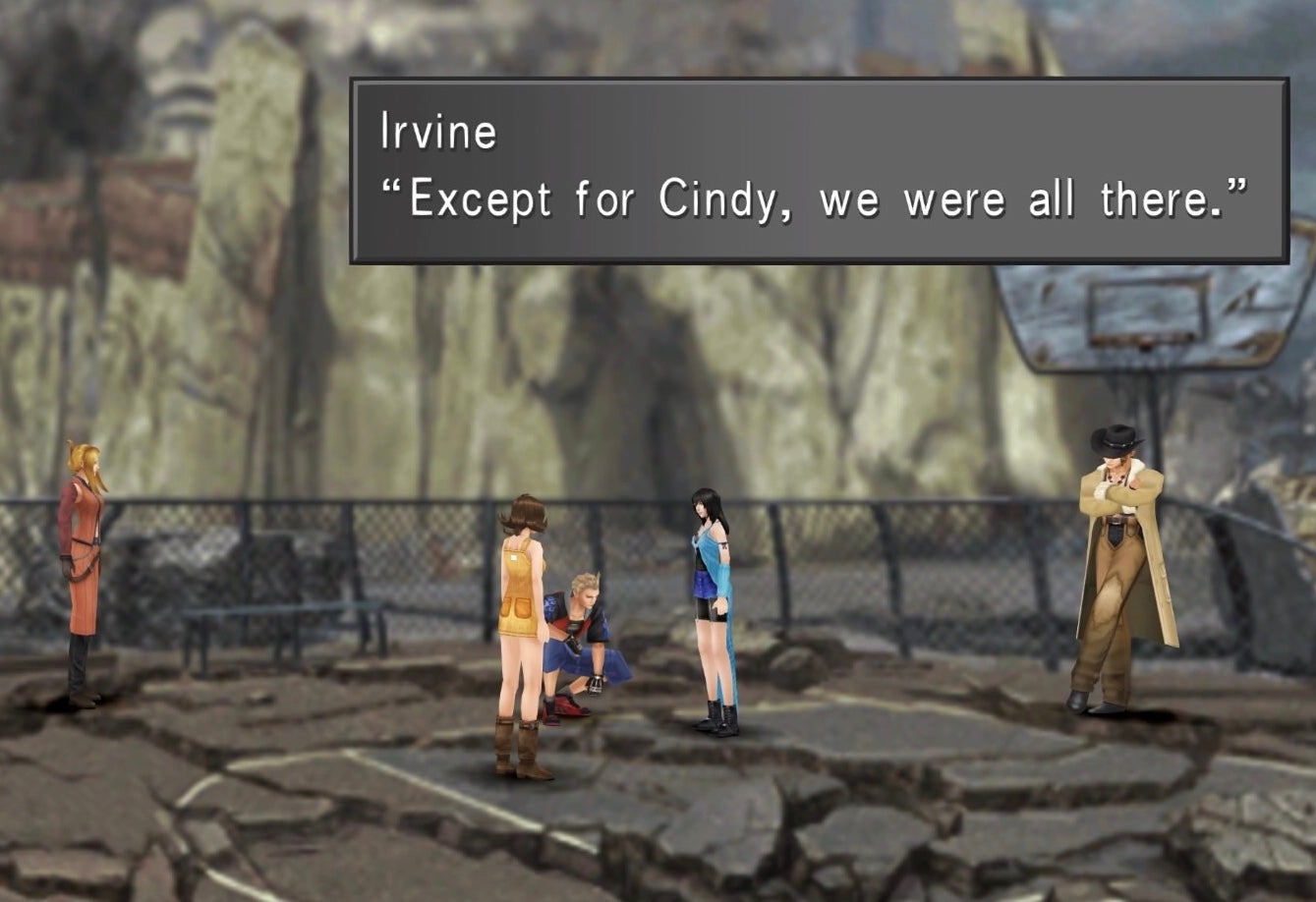 Near the end of the second disc of Final Fantasy VIII, the party members arrive at Trabia Garden, which has been destroyed by missiles fired by the Galbadians at the command of the Sorceress. It’s an emotional moment, with Selphie running around and finding all her old classmates in the ruins. In the cemetery, there’s a somber scene as one of the cadets is at the grave of his deceased girlfriend, explaining why he misses her so much. Even the draw point at the grave is for the spell Zombie. The piano music that plays in the background is plaintive. 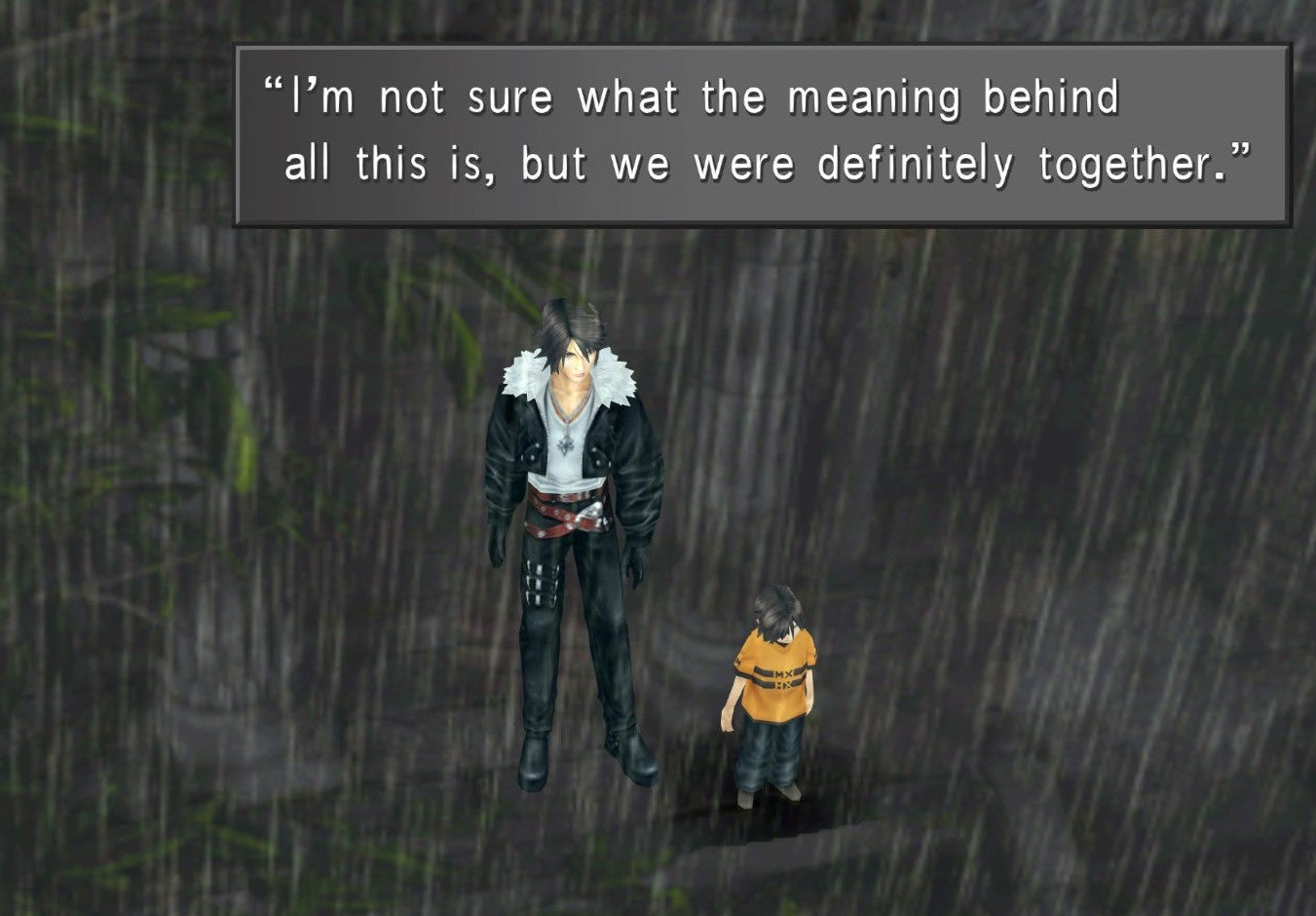 Locked in this emotional aftermath, they start conversing at the ruins of a basketball court. Irvine, the sharpshooter who joined them for the assassination attempt, explains that everyone actually knew each other and grew up in the same orphanage. On top of that, the sorceress they were fighting, Edea, was actually the matron who ran that orphanage. It’s a shocking reveal that kind of came out of nowhere. I wondered what significance it portended and how it related to the other narrative threads that felt somewhere incohesive. Why had they lost their memories? At first, they blame their amnesia on the Guardian Forces, as using the powerful summons led their users to lose their memories. I was honestly sceptical about this explanation, assuming it was a red herring, and thought we’d get a deeper backstory for their memory loss. 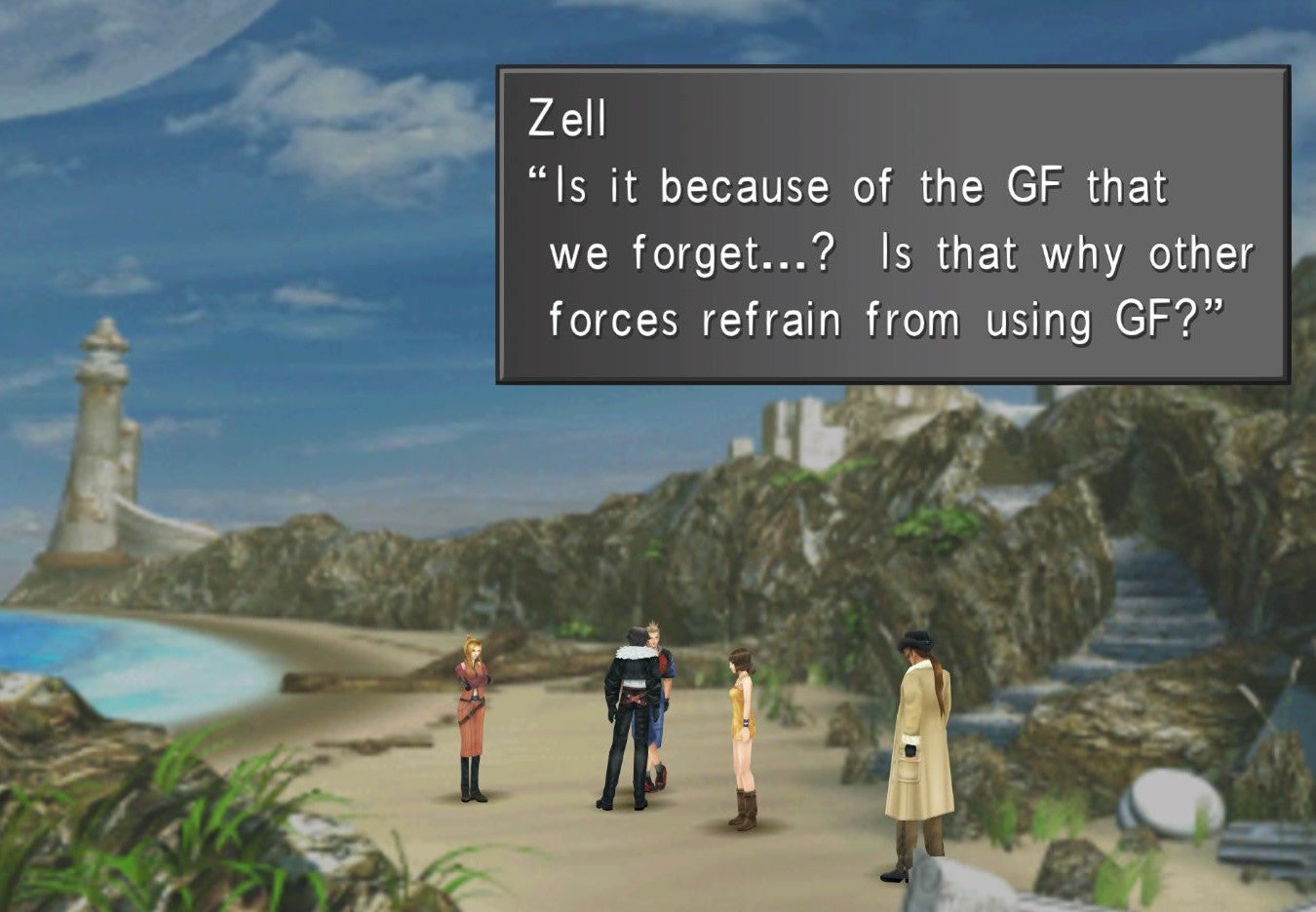 Knowing this on my replay, a lot more questions popped up about their amnesia. How long does it take before using a GF affects one’s memory? At the beginning of the game, Quistis gives you longer drawn-out tutorials about how to use GFs, suggesting Squall hadn’t used them much before. Does that mean Squall had his memories at the beginning of the game, but lost them over the course of the journey? If the head of Balamb Garden, Cid, was also in charge of the orphanage, but didn’t use GFs, how come he didn’t recognise anyone? Selphie was a transfer, but explains how she once used a GF. Does that mean even the brief usage of GFs causes amnesia? Then how come Irvine doesn’t suffer the memory loss after he joins the party and uses GFs regularly? 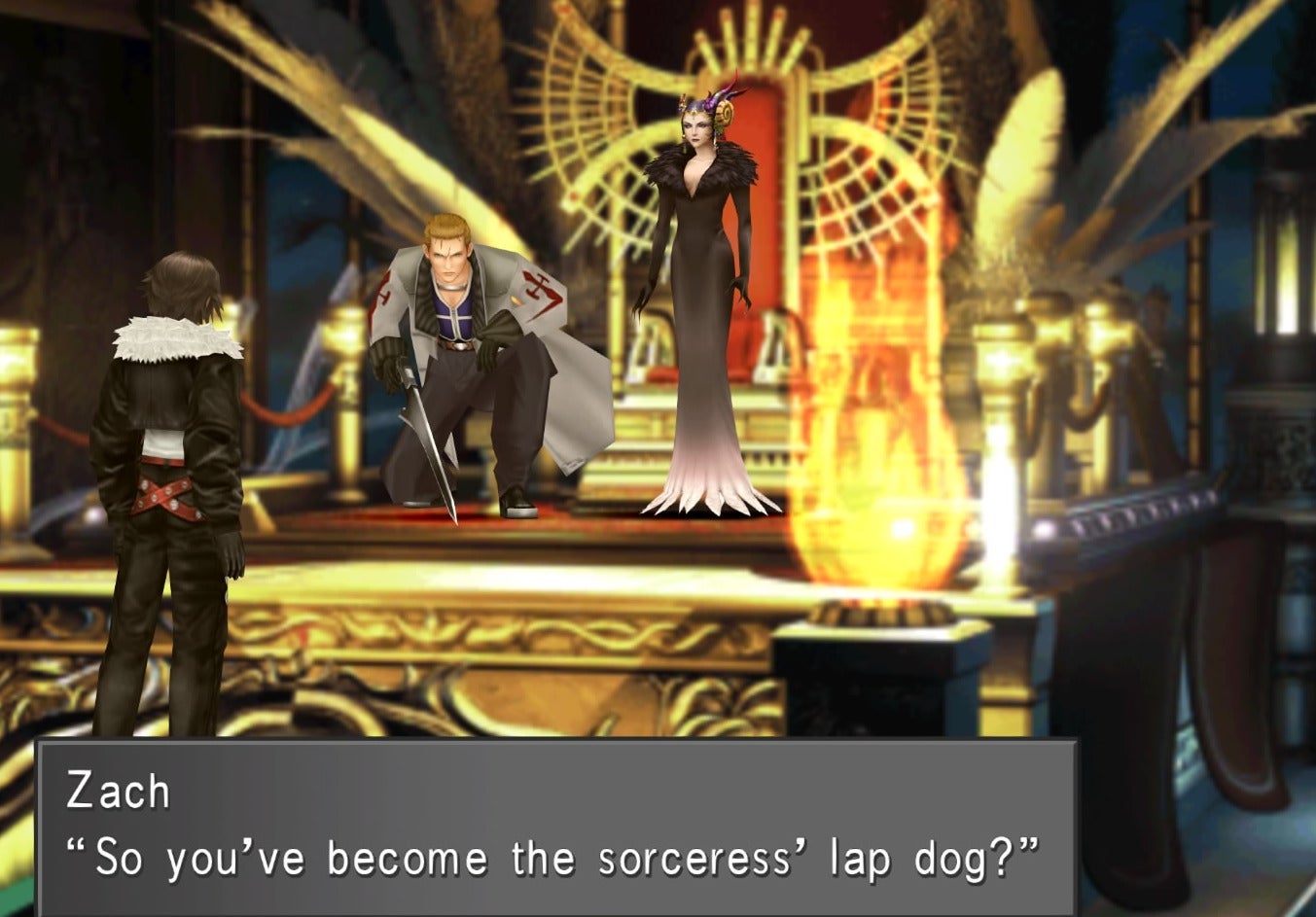 The strange part is, if amnesia hadn’t caused the characters to forget their connected past, I think the narrative could have been stronger. Seifer and Squall’s animosity would actually have a backstory instead of being an angsty over-the-top rivalry rooted in their subconscious desire for attention. Even the conflict with Edea would have had much more gravity, particularly during the assassination attempt, since they’d have been conflicted about having to assassinate the person who raised them. Later, when they see how Edea destroyed Trabia Garden, their emotional pain would be even more pronounced. On top of that, Squall would recall the fact that he was orphaned. Wouldn’t he then have wanted to know more about his parents? 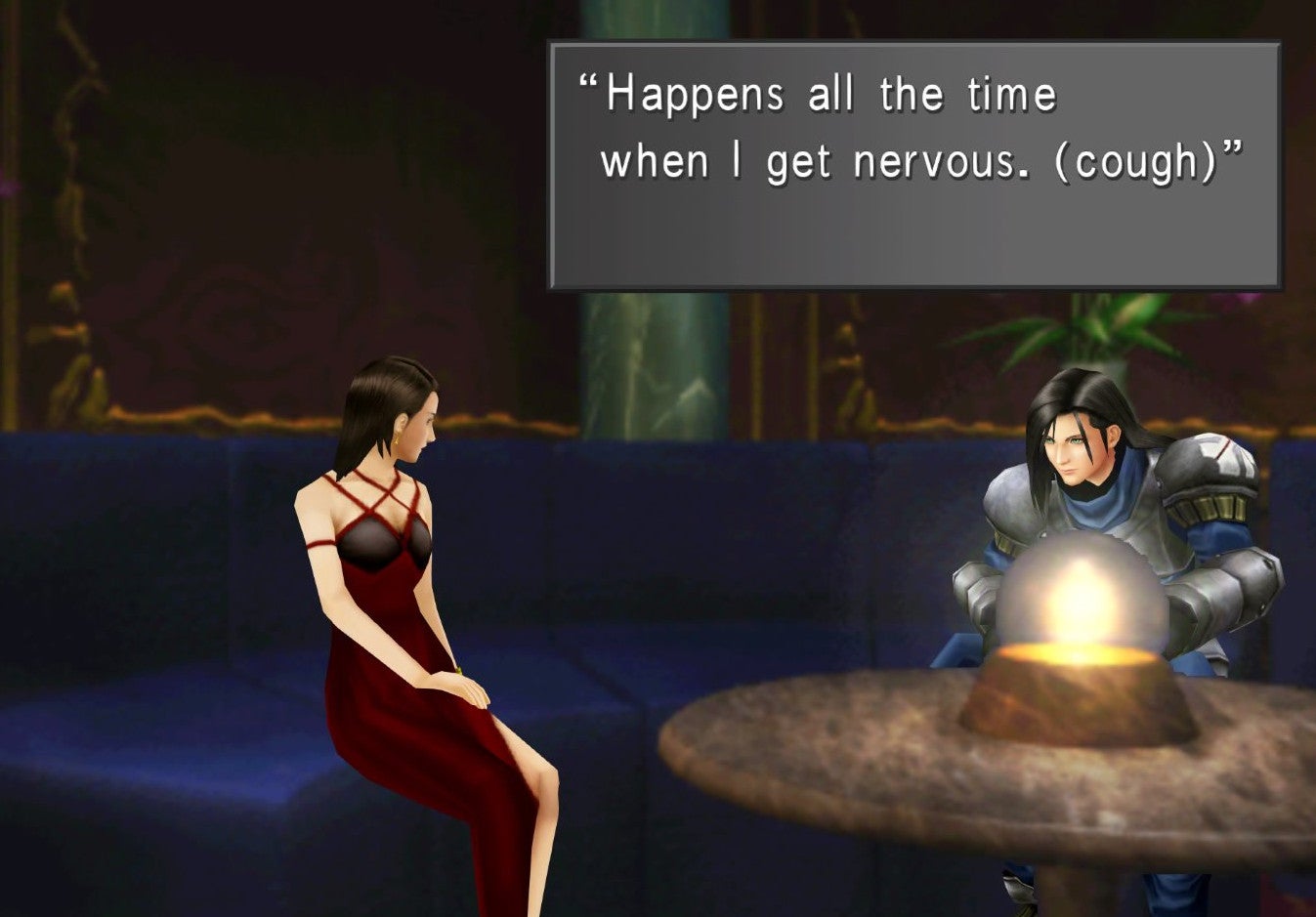 The flashbacks to Laguna would have had way more emotional resonance if Squall slowly came to the realisation that he was reliving his father’s life. That would also help shift who he is, as he realises his dad, who also uses a gunblade, recognised the importance of friendship and relying on the people around him. Squall’s romance with Rinoa would have more meaning as well, since he sees his father act like a bumbling fool in front of the woman he loves, Julia, then realises they never got together due to circumstances that were out of their control. 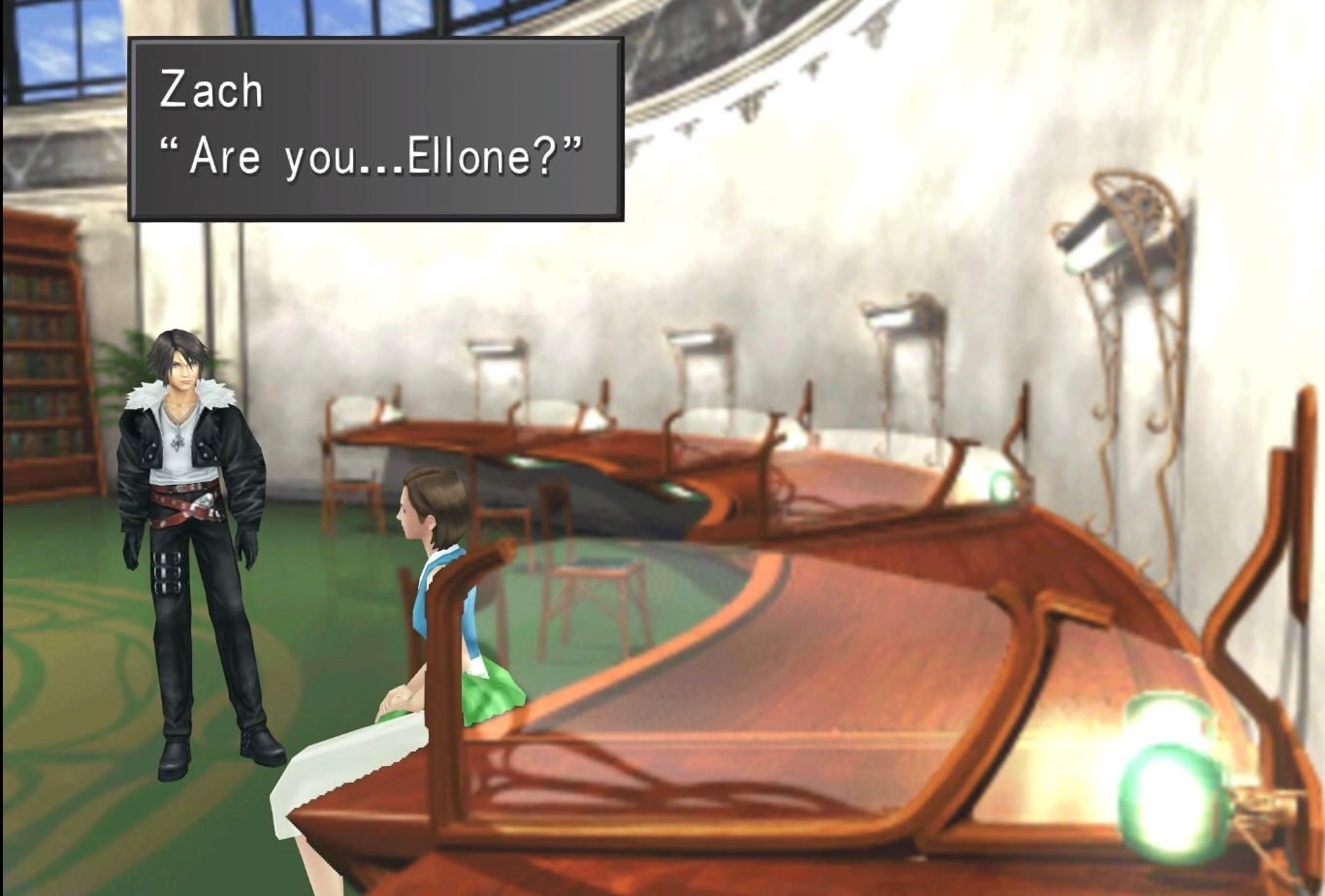 What’s also unusual is that a lot of Squall’s emotional distance hinges on his belief that his big sister, Ellone, abandoned him. But when Squall bumps into Ellone at the beginning of the game (she drops in to the infirmary after his dramatic duel with Seifer), she doesn’t immediately reveal herself to him. Even when they meet later, she doesn’t mention who she is. Does that mean Ellone is intentionally not revealing their connection? I was hoping Ellone’s power would have found a way of integrating everything together, but it never happened.

I felt like I was searching for puzzle pieces that didn’t exist.

Only a Plank Between One and Perdition 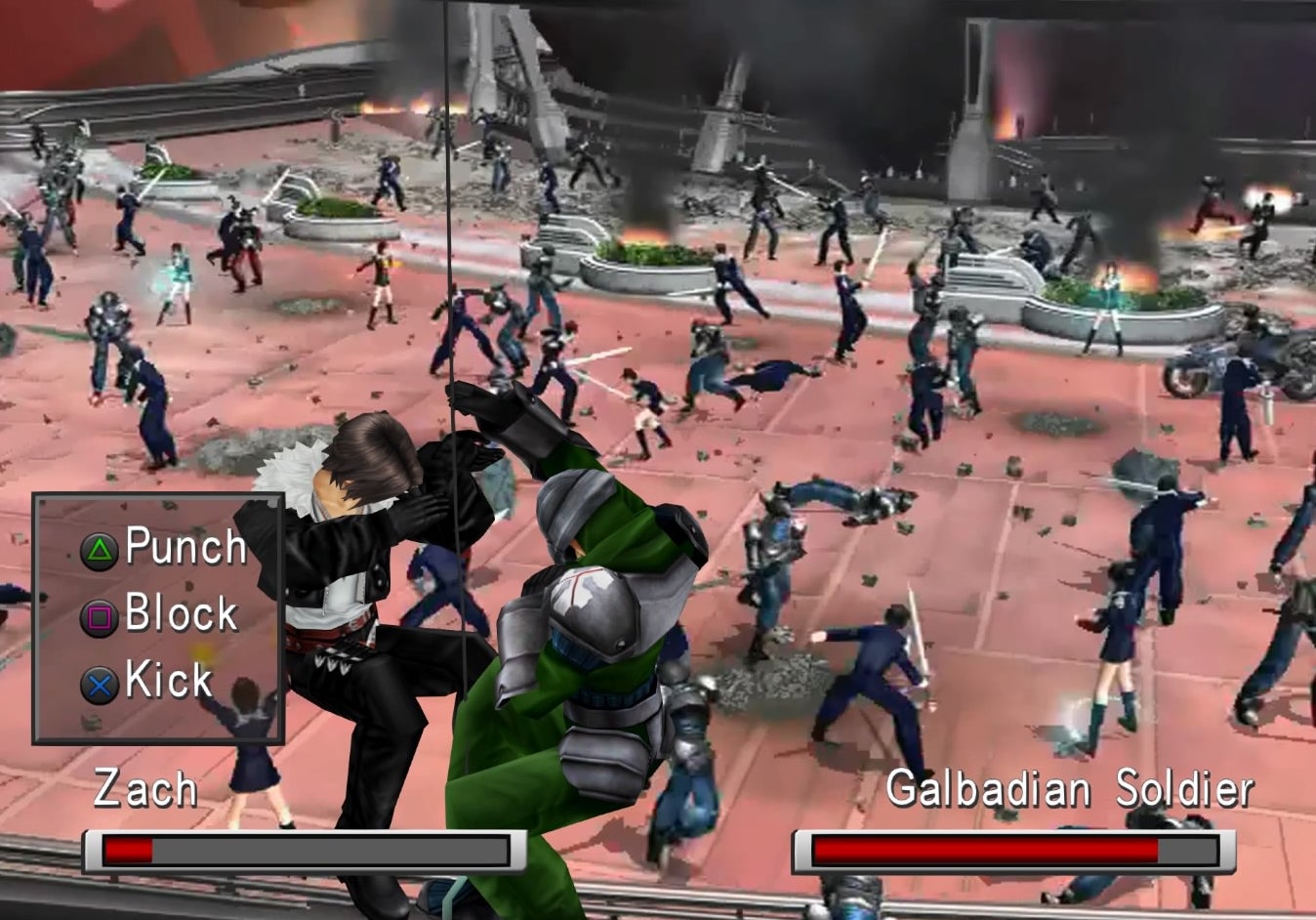 The rest of Final Fantasy VIII is great, and I even enjoyed the music video love sequence in space between Rinoa and Squall. The time compression plot by the sorceresses, and the time loop where Squall tells Edea about SeeD, leading her to found the organisation so they could battle the sorceress in the future, reminded me of the first Final Fantasy and Garland’s loop. The last cutscene is one big mind trip that makes for a rewarding ending to one of the most epic Final Fantasy games ever developed.

This time through, I used a trick I learned from the FF games and induced intentional amnesia on FF8’s amnesia plot thread. I enjoyed it a lot more, leading me to conclude that sometimes forgetfulness isn’t a bad thing.