The world of Grand Theft Auto Online has gotten a bit stranger after the latest update, released a few days ago on Halloween. Suddenly players now have the opportunity to become aliens and fight off waves of farmers, soldiers and FBI agents or players can turn into different animals, like rabbits and dogs. Or if you are feeling really wild and are a little lucky, you can just become Bigfoot.

Every year Rockstar has always updated GTA Online to celebrate Halloween, usually adding new creepy modes, scary masks or evil-looking vehicles. This year, Rockstar’s new Halloween themed mode is a series of new survival missions, all named some variant of Project 4808. These new survival missions have players take control of different, strange-looking aliens who are all equipped with powerful laser and plasma weapons. 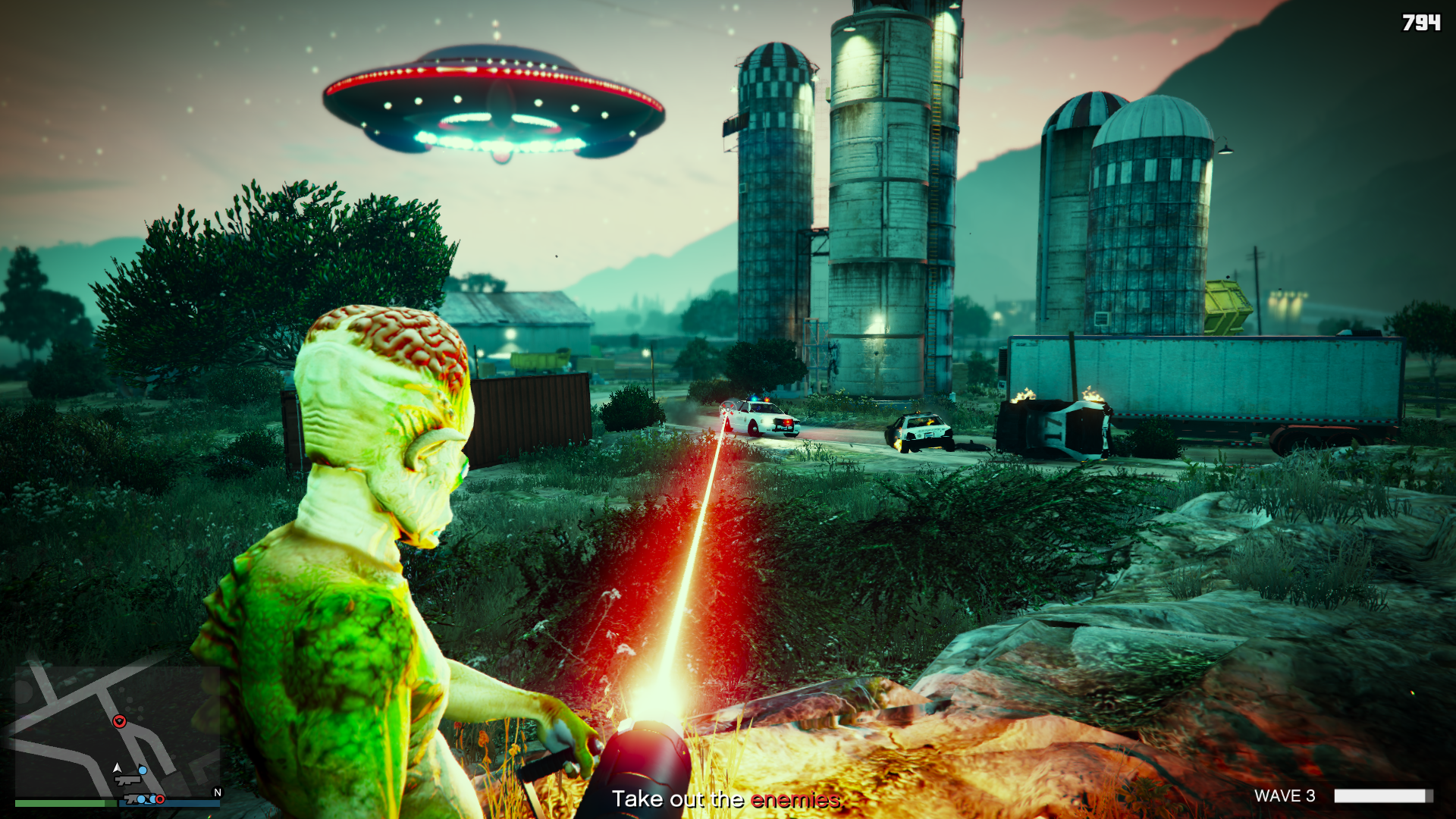 Beyond the UFOs, aliens and laser weapons, this is your standard survival mode. If you don’t like survival in GTA Online, you probably won’t enjoy this new mode. But I do like some of the subtle changes Rockstar has made to the mode, including the new health pickup. In the standard survival mode these are just health kits. But in Project 4808 these are replaced with the long sought after alien egg, something that was first hinted at back in a mural on Mount Chiliad years ago. It later showed up in a secret alien mission back in 2017.

Compared to previous Halloween modes, this isn’t my favourite, but it is a nice and silly addition to GTA Online. By the way, all those other Halloween modes are still available in GTA Online and many of them, like the amazing Slashers mode, are currently offering double RP and cash right now. This is me, as a rabbit, running for my life.

The other big thing added in this new Halloween update is the ability for players to become various animals in GTA Online. Becoming an animal has been a thing for a long time in Grand Theft Auto 5‘s singleplayer mode. But now this strange ability has become available in public and private GTA Online lobbies. It works just like it worked in singleplayer. Players need to find one of 75 Peyote plants that are hidden around Los Santos. (Don’t worry, fans already have them marked on a map.) Once you find a plant, eat it and you will become a random animal. This can include a dog, a rabbit, a deer or even a shark.

At one point I was driving around the city and ran into a player who was a dog and was chasing another player. Later on, I became a rabbit and was chased by a player who tried to stomp me to death. Things have gotten weird in Los Santos.

Now if you go to a certain area of the map, at a certain time of night, when it’s foggy and eat a specific plant you can become the legendary Bigfoot. That might sound like one of the fake internet rumours, but this is totally true.

As Bigfoot, players can punch people and kick people, but they can also parachute and use guns. You can now rob a liquor store as a Sasquatch.

It’s only been a few days since these animal transformations have been added into the game, so the community is still figuring out what they can do with them. Maybe in a few days or weeks, we will see stunt videos featuring cats and Yetis?

As I said, things have gotten weird in Los Santos.