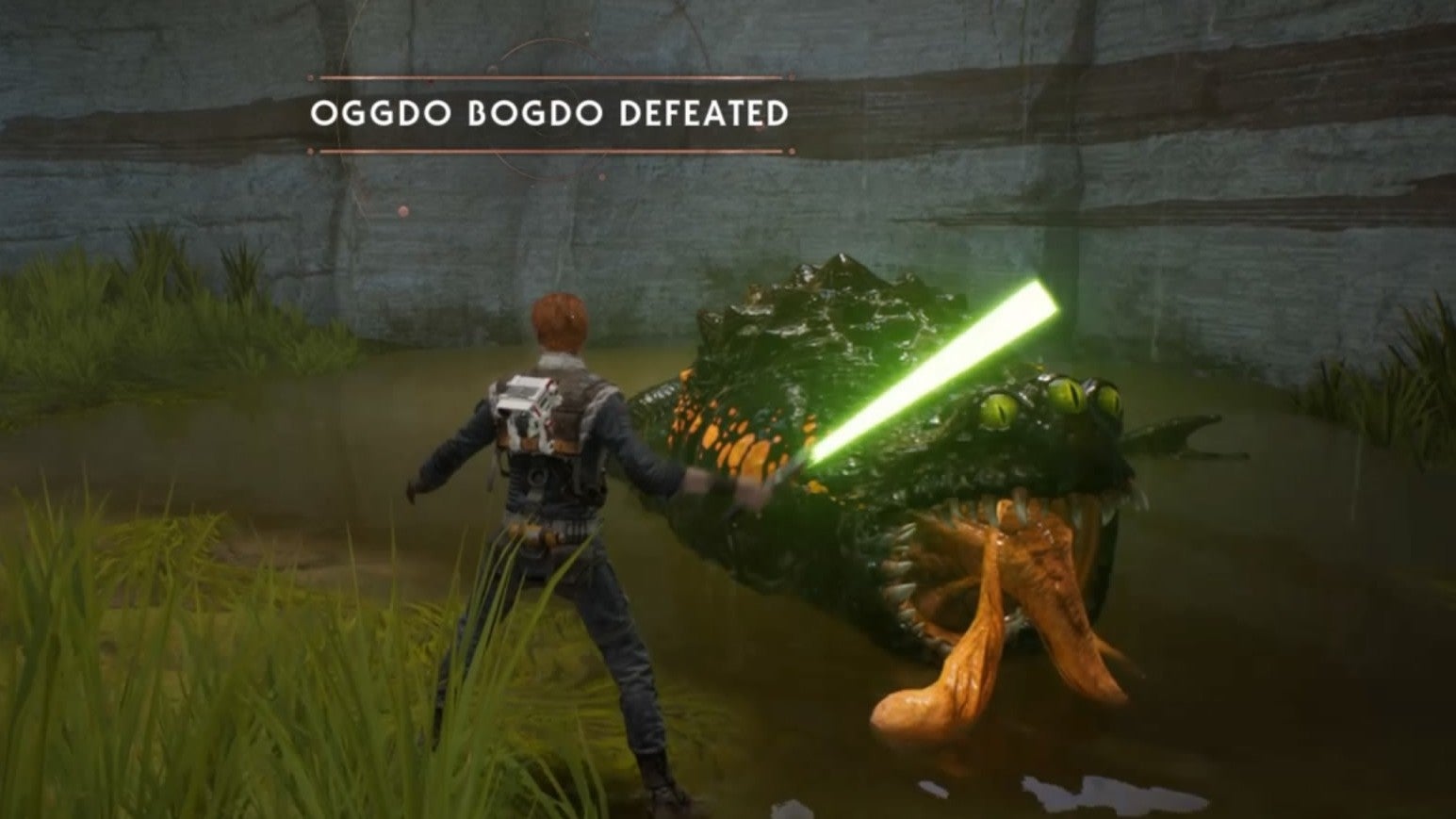 The key to beating one of Star Wars Jedi: Fallen Order’s earliest optional boss fights is to start it off with a jump attack. If that attack connects successfully, you’re golden. If not, you’re in for a world of pain.

Oggdo Bogdo is a giant black alien toad on the first planet you go to in Fallen Order, so named because one of Respawn’s designers liked the sound of those two words rhyming. As you loop back to your ship to leave, you can find him hidden in a cavern below the surface toward the end of the map, although it’s also possible to skip him. If, however, you accidentally fall into Oggdo Bogdo’s nest (as I did) and decide he must be slayed, trying to beat him can become all consuming. Oggdo Bogdo has a lot of health, but you find him early in the game when you don’t, and also parrying his attacks isn’t always the easiest. So I died—a bunch—and I’m not alone.

Fortunately, you can actually take down a huge chunk of the beast’s health simply by landing a jump attack with your lightsaber. When an enemy is positioned under you in Fallen Order, a button prompt will appear for you to perform a jump attack. This does a bunch of extra damage, and in Oggdo Bogdo’s case, it gives you a huge advantage. It’s easy to miss the opportunity, though, because if you don’t make sure you have things lined up right, you’ll simply drop into the cave and have to face him at full power.

To get yourself in position, you need to skip the first hole above his cave, head to the second two (which are really close together), and peer down into his lair until you see him below you. Then hop down, wait for the bottom prompt to appear and slash his health bar almost in half.

From there you can finish him off by parrying and countering with three strikes before rolling away and going after his tongue. Occasionally Oggdo Bogdo will try to wrap his tongue around you, and when he does, you can use your force ability to slow down time and attack his tongue, doing more damage than a regular attack against his body. It’s still easy to die in this fight, since Cal can only survive for a few hits and only carries two stempacks at that point in the game.

That challenge is also what makes beating Oggdo Bogdo so satisfying, though. If Oggdo Bogdo couldn’t stand up to your lightsaber, what chance does the Empire have?