Legend Of Bum-bo Is A Pleasing, Puzzling, Poo-Filled Prequel To Binding Of Isaac

I’ve been staring at my computer screen for three minutes trying to decide where the piles of poo should go.

If I can get four of them in a row, I can fling a pile at the rotting sack of guts bearing down on me, and temporarily block it. But no matter how I tried, I couldn’t get more than three in a row. In a last-ditch effort to rescue myself from certain doom, I spent my last bits of mana to reshuffle the board, let the new shits fall where they may, and tried to puzzle out a new solution, like that Maths Lady meme but for piles of crap.

The Legend of Bum-bo is the latest game from Edmund McMillen, a spin-off of his ever-popular roguelike The Binding of Isaac. Co-developed with James Interactive and released yesterday on Steam, Bum-bo is a prequel to Isaac set in the same dungeonverse of giant bugs, mutilated-flesh monsters, and poop—lots and lots of poop. But unlike Isaac, Bum-bo is a turn-based role-playing game where tile matching rules the day. Despite its underwhelming presentation and occasional bugs, the mashup is fun, challenging, and hard to put down.

The setup is simple. Choose a character—initially Bum-bo the Brave, a strength archetype, though others open up as you get farther in the game—and then take on monsters, one room at a time, until you get to a boss. Beat it and you’ll reach a new chapter and unlock a new character. Die and you start over from scratch. There’s no map, and no choosing which room you go into next. You can select one of two random items from a merchant when you end up in one of his rooms, but otherwise the bulk of the decision-making takes place on the game’s 4×9 tile-matching board during each battle. 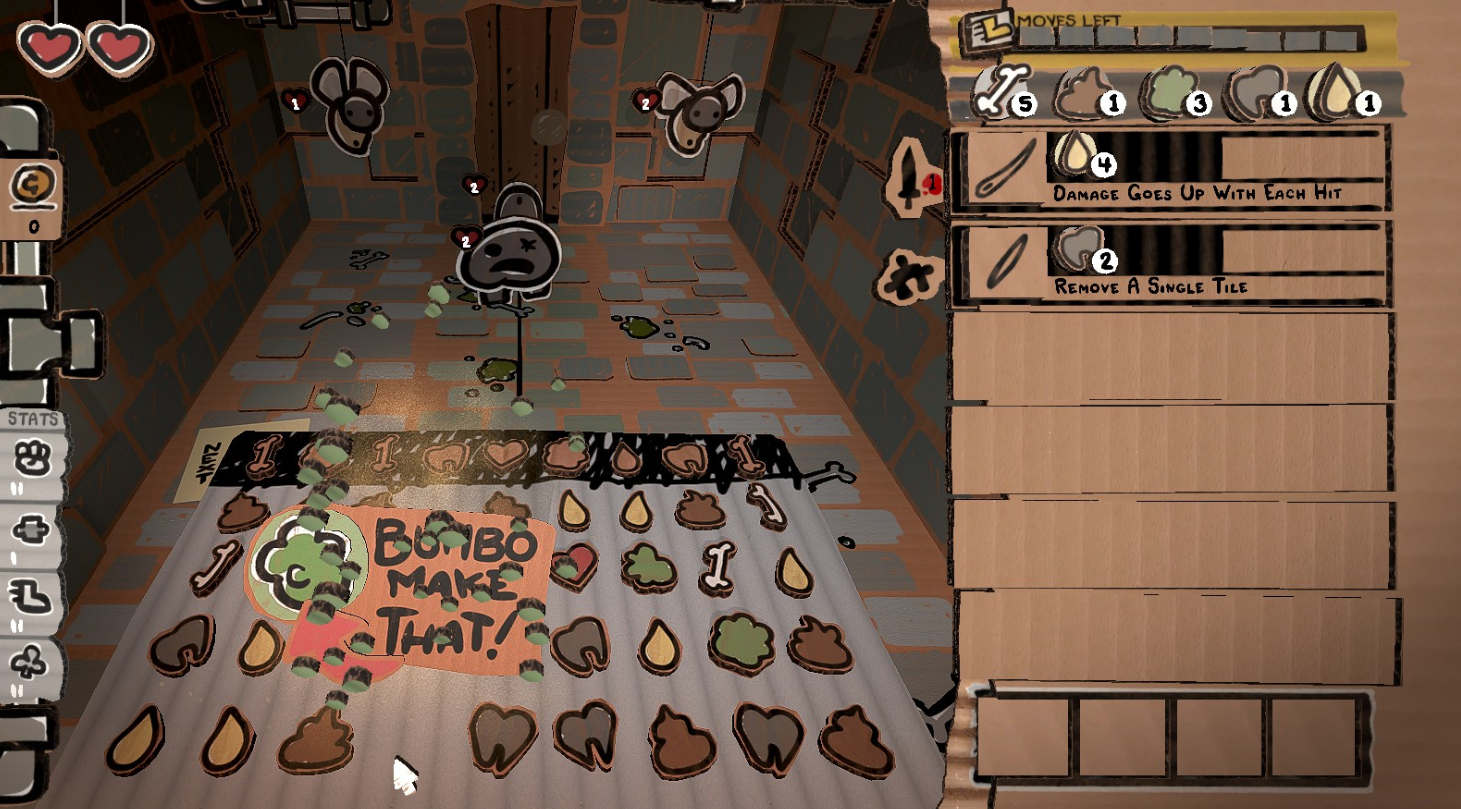 You character can attack, heal, and block, but in order to do so you first need to successfully link up four of the corresponding tiles. Lining up four bones will let you throw a bone at the enemy to deal damage. It’ll also earn you four bone mana, which can be used on spells. Get four boogers in a row and you can launch one of them to stun an enemy for a turn.

Once a match occurs, the used-up tiles are replaced by new ones from the top of the board, shifting everything else down. Since you only get two tile moves per turn, maximizing their effect is paramount. This often means deciding between moving tiles around to initiate a single attack or trying to set up multiple matches for the next turn.

Enemies are placed in one of three lanes. Some need to get close to you before they can attack, while others need to prepare before they can attack, meaning they only act every other turn. Despite wanting to try and brute-force my way through regular fights, it’s easy to die, and healing tiles, represented by little hearts, are hard to come by, so every move has to be carefully thought out. Get into the right flow of things and you can come out of a fight completely unscathed. Don’t, and even the lowliest fly can bring you to your knees.

Unlike other matching games, Bum-bo doesn’t really emphasise going after combos. In the several hours I’ve spent with it so far, I’ve never gotten a bonus for getting multiple matches in a single turn. Instead, Bum-bo’s strategising comes from utilising the special items you collect over the course of a playthrough to maximise the effect of a character’s special ability. 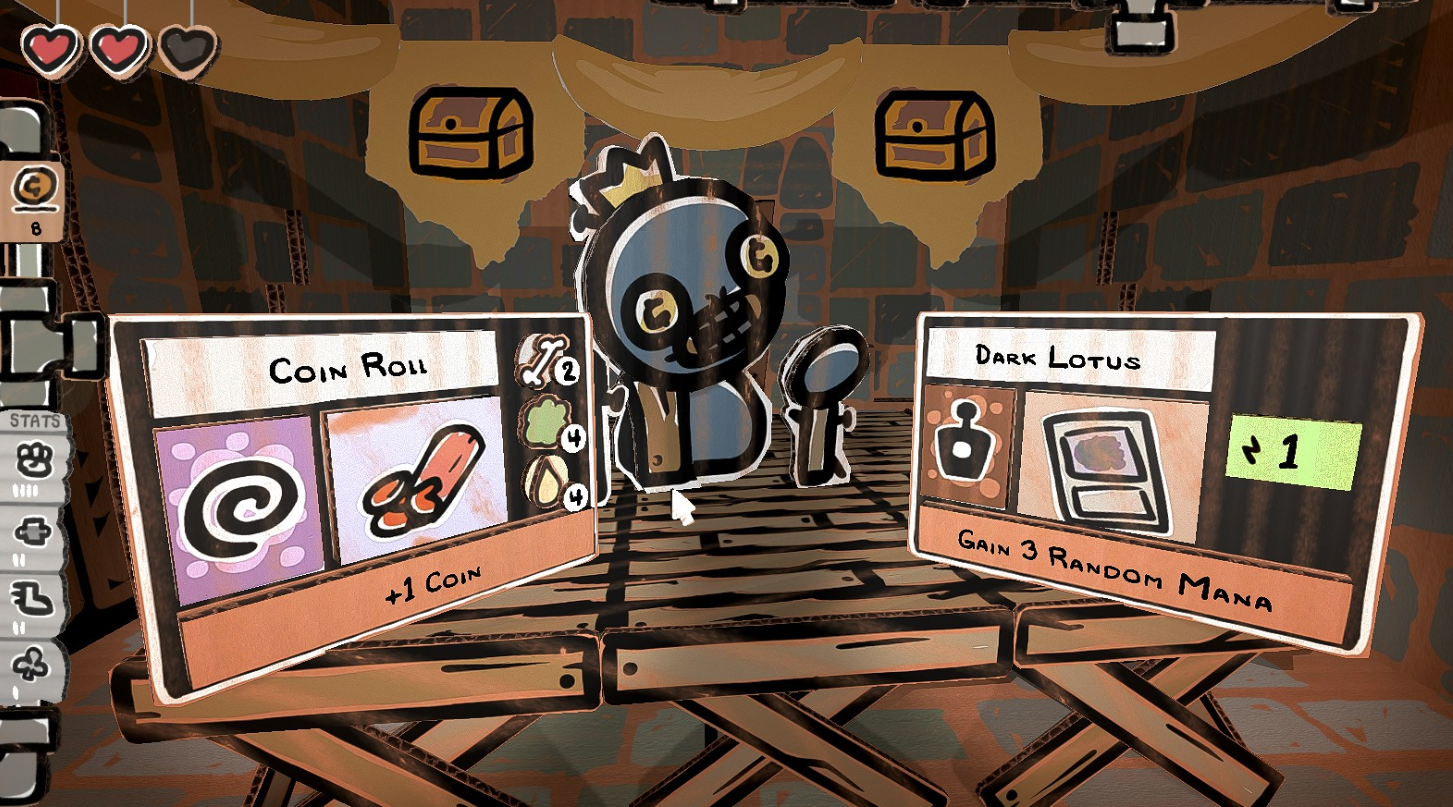 For example: Bum-bo the Brave does more damage the less health he has, and gets a three-damage attack spell attack every time you match four bones. Finding a trash can shield, which blocks incoming damage for a turn, can make that combo even deadlier, letting you risk playing with less health. Bum-bo the Nimble, the game’s rogue archetype, gets bonus mana for every match and has an attack spell powered by tear drop mana, the matches for which grant extra turns. This attack also does more damage the more times it’s used during a fight.

Juggling each of these considerations makes the otherwise straightforward matching system an interesting and ever-changing knot to try and unravel. While I haven’t managed to beat the game completely yet, I feel like I’m steadily making progress towards that goal as I get a better feel for how these mechanics interact, rather than feeling purely at the mercy of my twitch reflexes and random luck, as when playing The Binding of Isaac.

Bum-bo still looks a little rough around the edges, and despite the breadth of monsters and items you can encounter during a dungeon run, it certainly feels like a much smaller game than its predecessor. There’s also more than a few bugs, some of which were addressed in an update that went out earlier today and others which the developers say will be fixed in the coming days. Fortunately, like The Binding of Isaac, The Legend of Bum-bo has solid bones and plenty of room to grow.