Mario Kart Tour’s big winter update went live yesterday and it feels underwhelming, making me question whether or not it’s really worth it to keep subscribing to the game’s $7.99 monthly subscription.

The game’s Winter Tour is meant to be a festive bit of seasonal fun to close out the year. It sports Mario in a Santa costume as one of the new drivers you can get, adds a giant Christmas tree to each of the race tracks, and marks the start of a new reward progression for players to work through.

But a magical winter wonderland it is not. The new update doesn’t transform old tracks into ice skating rinks or ad new snow effects, it only adds DK Pass, a fun but short-lived wintery escape. Fortnite has set the bar when it comes to game worlds constantly getting retouched every so many weeks, and while I wasn’t expecting a hole to open up in the sky over Kalimari Desert, the Winter Tour feels more like Groundhog Day than a fresh start. 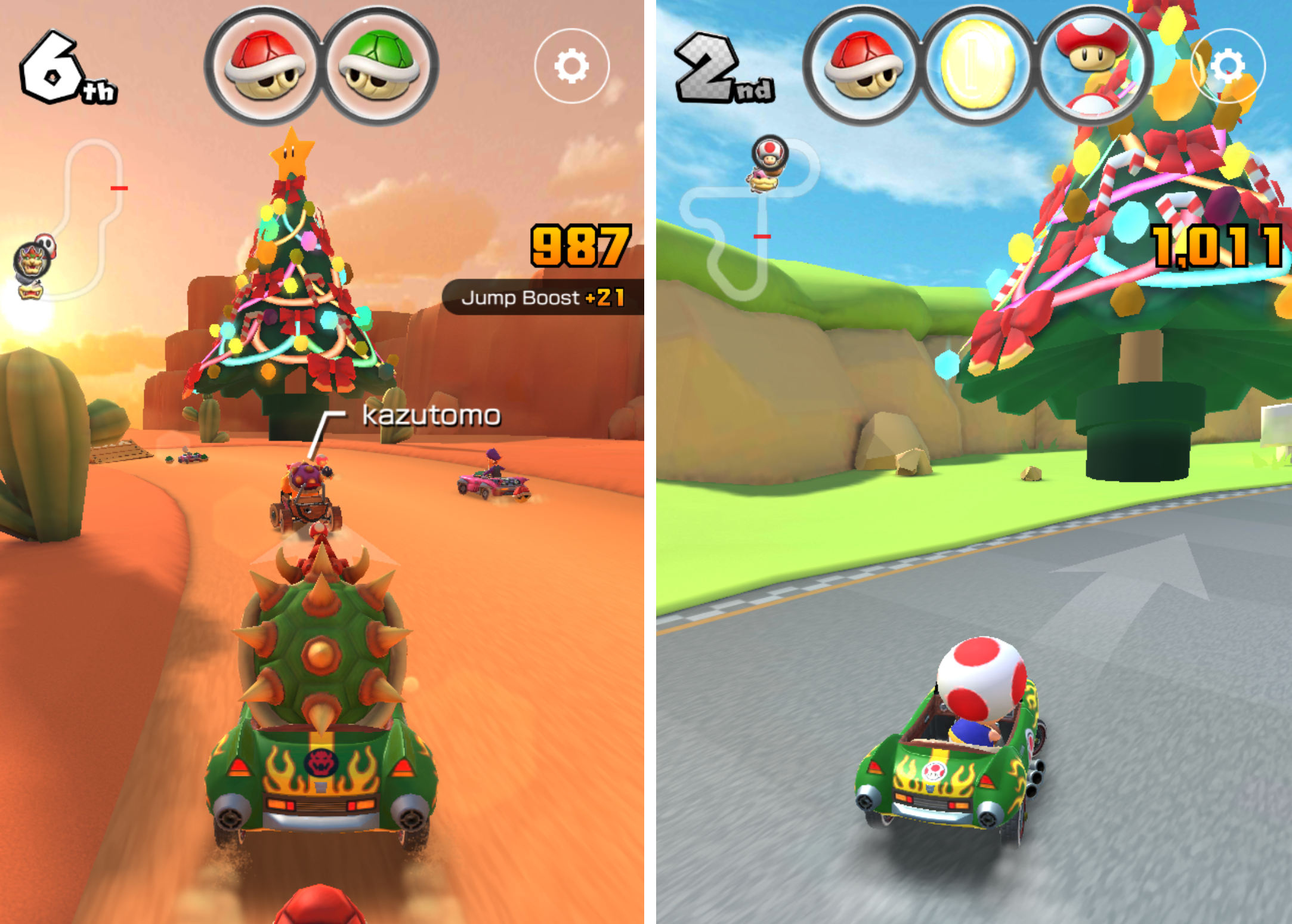 At its core Mario Kart Tour is a grindy, progression-based game. You complete tracks, win stars for your performance, and use those to unlock new cups featuring new tracks. Do well and the numbers go up. Do poorly and the numbers go up, just more slowly. The Winter Tour might have gotten around this recipe for tedium even without a more festive overhaul, if the prizes felt worth it, but there too things feel off.

Mario Kart Tour launched near the end of September with a $7.99 monthly subscription option. This gold tier membership unlocks access to 200cc races (faster and more fun than the base ones), special challenges, and bonus rewards for hitting completion milestones. On the one hand, that’s the same monthly price as Apple’s arcade subscription service which gives smartphone users access to a bunch of great indie games. On the other hand, it’s more appealing than paying $20 for the additional gems you get by grinding as a subscriber.

This month gold members like me feel short-changed. The only racer you can earn with the gold tier is Dry Bowser, which, if you’ve been playing Mario Kart Tour from the start, you likely either already have or couldn’t care less about. Pink Gold Peach, another new driver added in this update, isn’t one of the rewards. Neither is Santa Mario.

Instead, Santa Mario is currently spotlighted in the winter pipe. What that combination of words means is that players have a one per cent chance of getting him every time they play the pipe lottery, but are guaranteed to get him by the 100th attempt no matter what. Pulls cost five gems each, which are only earned slowly as you level up and complete dozens of races. I want to play Winter Tour to race through some of my favourite snow levels from Mario Kart games of old with Italian plumber sporting his jolliest red cap and would gladly shell over $7.99 to earn that.

For better or worse, Fortnite’s seasonal battle passes have aclimated me to this value proposition. What I do not want to do is spend $7.99 and still have to gamble for it. That feels like a casino wooing me with complimentary chips I’ll just lose back.

The latest update to #MarioKartTour added a button that allows you to drift or steer. Check the in-game update notification for more info! #MKT pic.twitter.com/7vmlsDPFys

Mario Kart Tour is still a lot of fun and offers an elegant microcosm of the bigger Mario Kart experience available on the Switch. The latest update even added an additional touch button for drifting, making it easier to turn and rack up speed boosts for more skilled players. And I don’t need a subscription to enjoy these parts of the game.

I will need one to try out the game’s multiplayer, at least when it first launches next month. Nintendo announced last month that the feature is supposed to go into beta in December, testable only by paid subscribers. Eventually it will be open to everyone, but for a game whose true potential lies in being able to play against other humans, it’s easy to understand why some people wouldn’t want to wait. But I’ll probably just go back to playing Mario Kart on Switch for now instead.