Planet Zoo Has Cute Animals, But The Management Sucks

Ever wonder what would happen if someone made a traditional theme park management game, but with animals? Planet Zoo is here to help us find out.

I’d love to tell you that pitch is more nuanced, and that I was just being sassy for a lede, but really, it’s not. If you’ve played Rollercoaster Tycoon, Bullfrog’s classic Theme Park or especially Frontier’s own Planet Coaster, you’ll instantly be at home here.

Coming three years after Planet Coaster (which I found to be a lopsided pleasure), Planet Zoo is in many ways the same experience, just with a different focus. The interface is incredibly similar, the principles guiding your constructions and park management are the same, and even the overall structure of the things, from career to sandbox, is familiar.

I went over my Planet Coaster review just to be sure, and boy, it really is similar, not just in how it’s been designed and how it plays, but how I feel about it as well.

Once again, Planet Zoo is divided into a few different ways to play, but really into just two, starting with a career mode, which speeds you around pre-built parks and scenarios and asks you to perform certain functions, basically serving as a long, hands-on tutorial. When you’re comfortable with all that, you can ask for the keys to your own park and start from scratch.

And once again, this is daunting.

Many of the career levels are curated to perfection, designed with real expertise and care to look like real zoos, and so when you’re left on your own with nothing but empty land and a massive toolset at your disposal, it can be intimidating. Welcome to my Jungle.

Theme Park, only with lions instead of lines.

The sandbox mode is a thing of wonder, and the animals and crowds both add immensely to the cheery atmosphere.

Management mode is again a disappointment.

Completed most of the career challenges, then tried three different sandbox parks, all failures in their own beautiful way.

So intimidating that while I’m normally against the idea of having to unlock stuff in a sandbox mode, this is an instance where I might actually be in favour of it, because it could have lessened the terror I felt gazing upon an empty field, a seemingly bottomless set of buildings, paths and facilities to build and wondering where the hell do I start.

An example of how I found this an obstacle instead of an opportunity came early on, during a career mode goal. Dropping me into an established zoo, I was told crowds needed to learn more about a certain enclosure, and so I had to build a couple of information boards on the walls of the habitat, then add some speakers to blast the same information out verbally. Which sounds easy, but the sign for some reason gave me the option to pick a load of other animals that weren’t the ones on this enclosure, and the speaker had the same, only also with the caveat that I had to ensure it wasn’t too close to another speaker.

It was a lot to line up for what was such a minor part of park management, and involved clicking through a surprisingly large number of menus, and then drop-down menus spilling out of those menus. The brief’s intent was to show me how signs work, but it was also a warning that, hey, buddy, I hope you like menus, because you’re about to click through a shit ton of menus just to do even the simplest of things (more on this later).

It took me a long time to get over this fear, but eventually I got there and started sculpting my own zoos out of thin air. And let me tell you, it’s definitely worth the learning curve.

Once you know just where to put a quarantine facility, how barrier fences work, how to master terrain manipulation and how to make toilet blocks look like ancient Chinese palaces, your design options are almost limitless. Maybe you want to build an urban zoo in a temperate climate, maybe you want to build an expansive nature reserve in the middle of Africa, just do what you want, man, Planet Zoo ain’t gonna stop you. 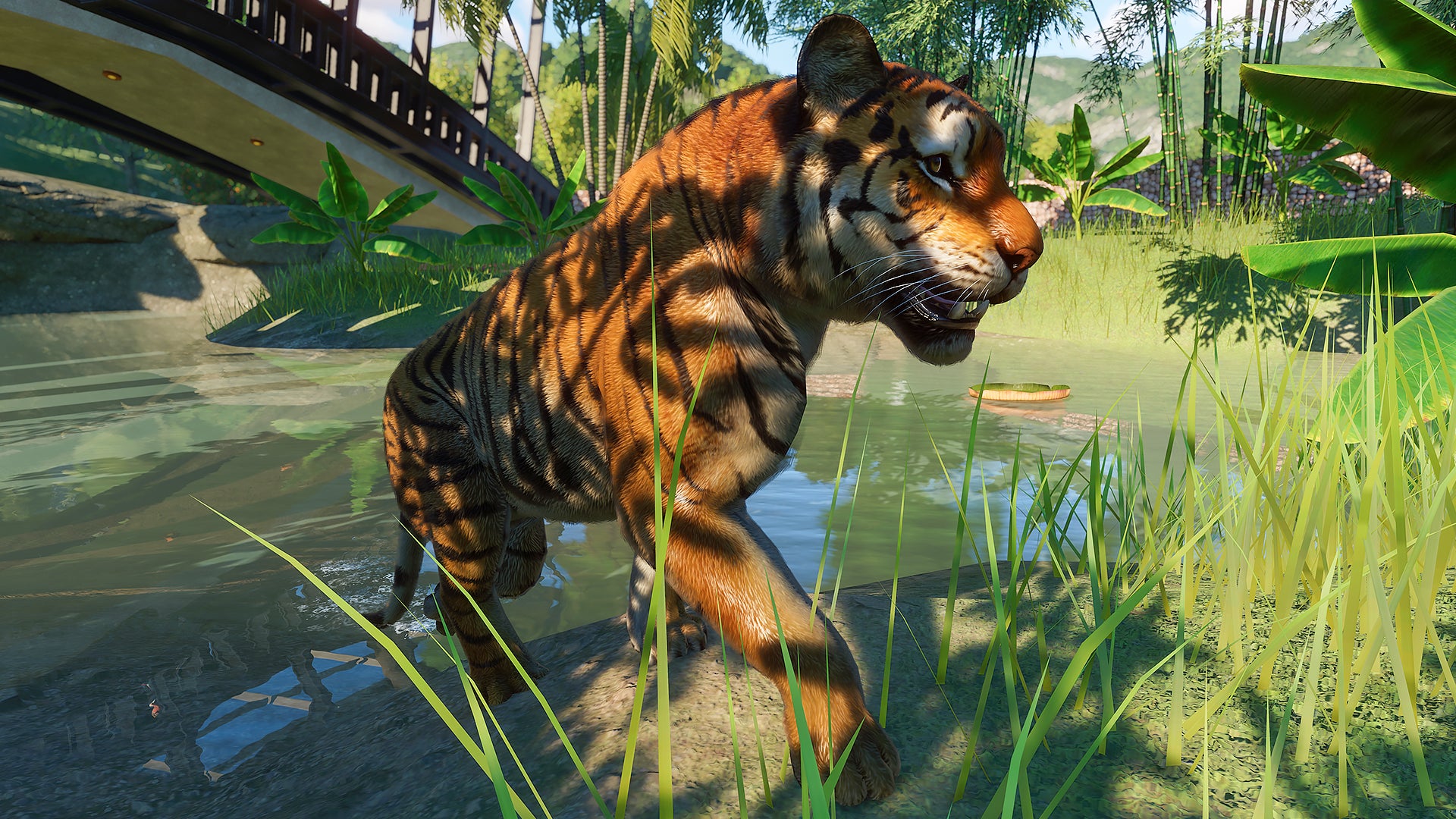 Just like Planet Coaster, the design and construction work undertaken in sandbox mode is the heart of Planet Zoo. It’s the most rewarding experience, and the thing most players will gravitate towards. Good thing it’s so fun then, because *checks Planet Coaster review yet again* yup once more, we’ve got a similarity, in that the management aspect of the game is a huge pain in the arse.

A criticism of Planet Coaster was that there just wasn’t enough meaningful management. Stuff like budget controls, utilities spending, balancing the books of each individual burger store, etc. In Planet Zoo there’s a lot more to manage, largely down to the fact the main attraction are living creatures and not ferris wheels, but it still sucks.

A good management aspect should present a challenge to experienced players, and a feeling that getting into the park’s books can make the difference between success and failure. Planet Zoo’s park management feels like an intrusion at the best of times (it delights in giving you a never-ending stream of tedious busywork to attend to), and an impediment at others (some of those simple actions require digging into menus then submenus then filters, which gets real old real fast).

The game is caught between representing a zoo—a place where wild animals are confined—and trying to serve as some kind of half-baked animal welfare simulator. Unlike Planet Coaster’s rides, which only need to be maintained, Planet Zoo’s animals need to be loved in a wide range of ways (which requires, you guessed it, a lot of clicking and menu navigation), and if you start failing any of them, they’re going to get upset. If they get too upset, protesters will turn up in your zoo and start shouting at you.

Which is fine, but this is structurally a game about running a zoo, not looking after animals, and the latter is a poor fit inside the former. I want to build a zoo and look at the fluffy bears, admire my path design and show off my complimentary architectural choices. I don’t want to be endlessly clicking on sick bears or old bears or bored bears or entering them in breeding programs or releasing them into the wild, because none of that is actually interesting in Planet Zoo. It’s just more menus and more busy clicking, and the amount of time you spend trawling through menus in this game instead of looking at cute bear cubs sucks. 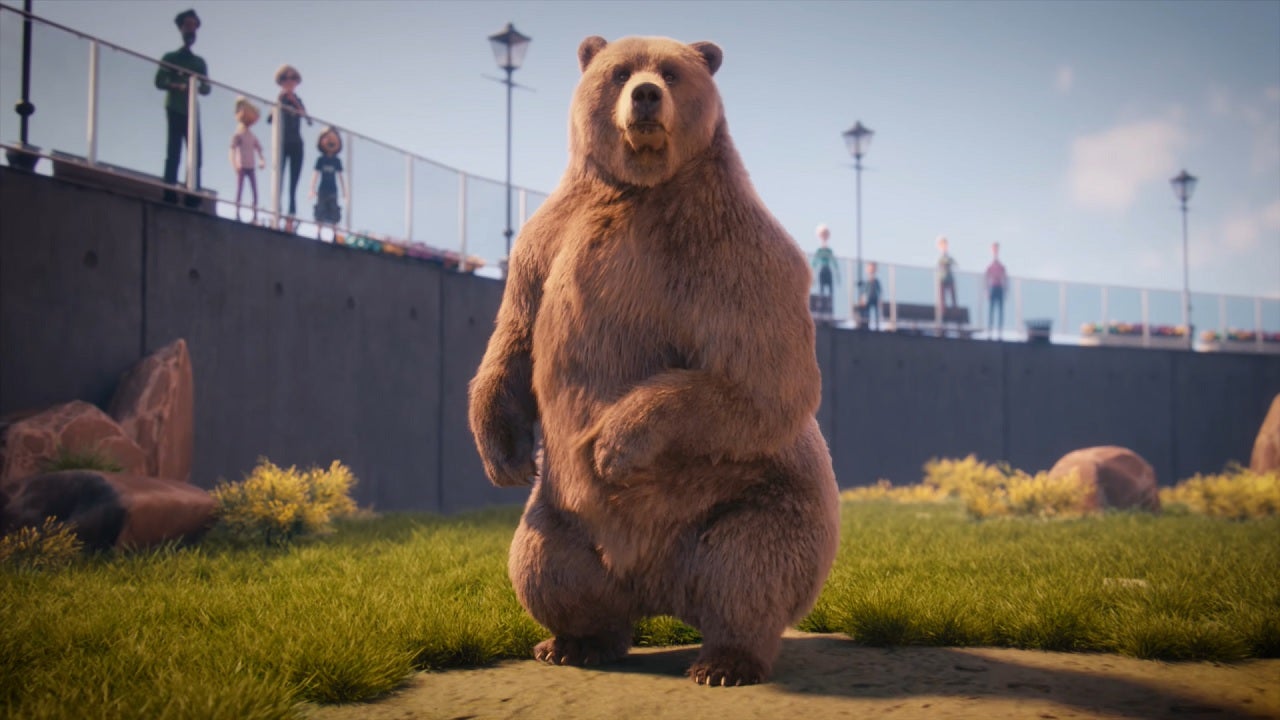 Look at the fuzz on this guy!

Now that I’ve brought them up, though, let’s go back to those fluffy bears for a second. The animals in Planet Zoo are stars. They look and move beautifully—the fur is a wonder—and I found myself spending a ton of time neglecting my park management duties just so I could watch cubs roll around playing, or a lion doing nothing but sleeping in the sun.

There’s a surprisingly wide variety of animals you can buy in Planet Zoo, of various sizes and origins, and who respond differently to where you put them and what you put in their habitat. Indeed the game’s central gameplay hook is everything you plan and do between deciding which animal to buy next and opening their habitat to the public.

How big is their habitat going to be? What’s it going to look like? What will the barriers be made of? Which trees and shrubs are you going to plant? How much food and water are the animals going to need, how are they going to be fed, do they get scared by crowds, should I build somewhere for them to chill out, how about friends, do they need friends in there with them?

It made me feel like a teenager’s fretful mother, and tying all those threads together into a completed habitat, to then watch something move in, make it their home and be happy there, is a real pleasure.

Except for the times they break out, which for some reason is treated as just another administrative checklist item in Planet Zoo, but is so cool and funny that it should be its own mode, or even its own game. Seeing one of my Orangutans strollin’ down the promenade checking out the soda stalls while crowds ran away screaming was maybe the single best moment I had playing the game, and I love the escape hijinx so much I am definitely not as judicious with my fence heights or maintenance as the game wants me to be.

Close behind the animals in the highlight stakes are Planet Zoo’s crowds, which randomise everything about a human being, generates them in enormous numbers then sets them loose in your park. Their variety and crowd dynamics create a wonderful sense of place, and they help as much as animals and habitat design to bring your park to life. They’ve also got a pretty cool AI driving them that makes them behave like actual crowds, with families sticking together, and individuals working to avoid others when passing, which is mighty impressive to see at scale in bigger parks.

I’m kinda bummed that, three years on, this game is so similar to Planet Coaster, to the point where many of the ways you have to deal with your animals feel tacked on in order to support an existing framework, rather than working elegantly in a manner specifically designed for a zoo game.

But then, I also loved Planet Coaster in spite of this, and the same things that made me love it then apply here as well, only in prettier and more satisfying ways. This is one of gaming’s great sandboxes (provided you can tame its expanse), and if you thought it was satisfying linking some theme park rides together, wait until you do the same thing only for baby pandas.