For the longest time, I’ve wanted to dive into a Pokémon game. I thought the recent release of Sword and Shield would be a good place to start. I’ve played about five hours of Shield, collected a bunch of Pokémon, and beat three gyms. I’m having a lot of fun, but I’m also baffled by the rules of this world.

Does everyone compete in the Pokémon tournaments? Are there non-Pokémon schools for the kids, or are they allowed to roam freely? Why does everyone, aside from the obvious villains, look and act so cheerful? I know these are silly questions to ask regarding a video game about collecting pocket monsters, but its inhabitants are so exuberant about Pokémon and so universally driven to become better trainers that it’s made me wonder: Why is everyone’s goal either to become the new champion, or aid those who are seeking that path? 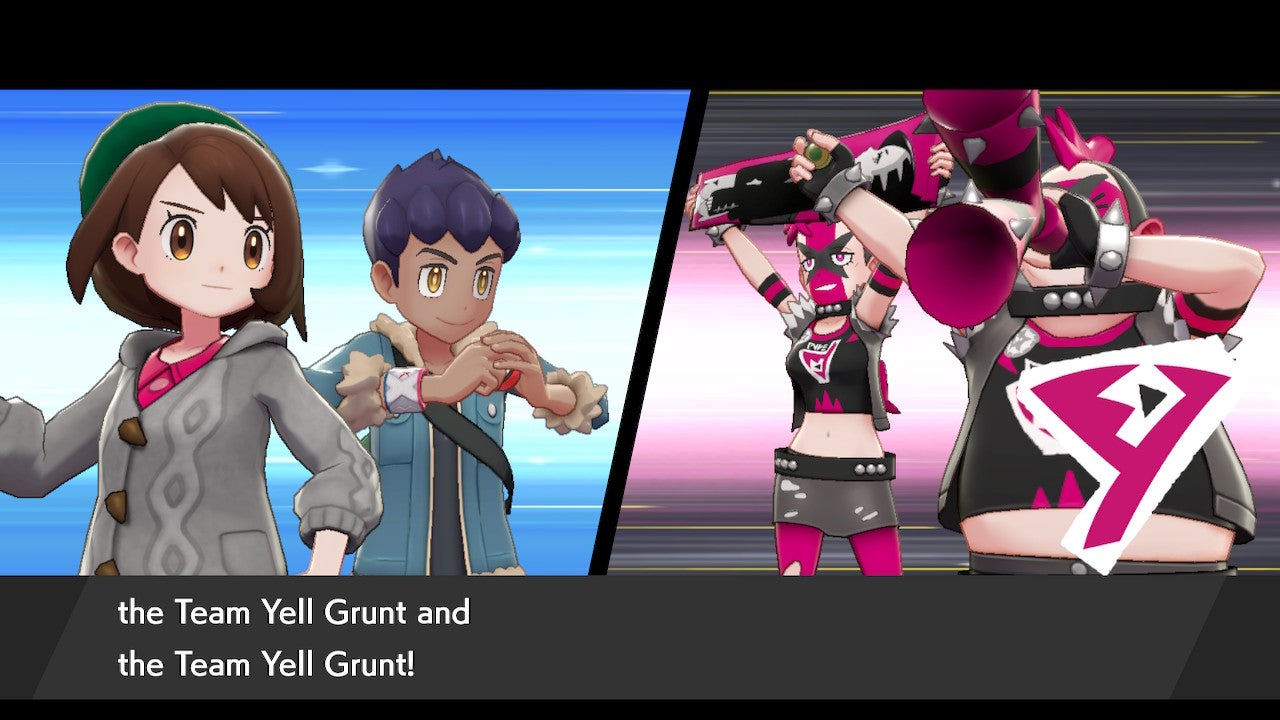 I wasn’t expecting a whole lot of story, but so little is provided in Shield. I didn’t know if this was the norm, or I just had to wait until the game got going to understand the world better. Is there any reason the protagonist wants to become the champion? Your neighbour, Hop, seems driven by the fact that his brother is the champion. I didn’t know if there was a similar motive for the protagonist.

When I decided to leave home to begin my Pokémon world tour, I didn’t even need to consult with my parents. The protagonist’s mother came out to the train station to give me some camping gear and advice about using it in the Wild Area. She didn’t seem too concerned that the latter is full of really dangerous monsters that could wipe out my Pokémon. Is it part of the world’s rules that Pokémon never attack humans? 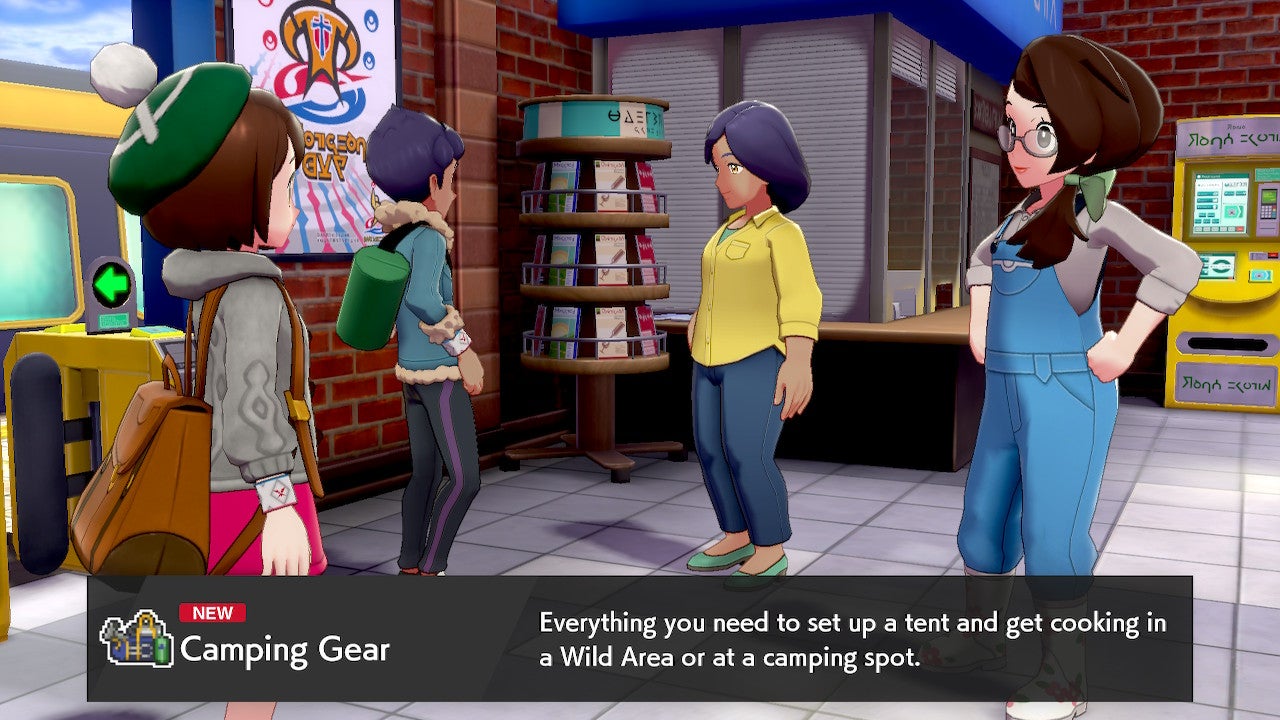 When it came time to choosing my starting Pokémon, I selected Scorbunny, mainly because I used to have a pet bunny. I also decided the fire element would be a good starting point. The combat revolves around what Tim Rogers described as the “Gran Turismo of rock-paper-scissors.” Certain Pokémon have weaknesses to other elements, and finding out how to combine diverse teams of Pokémon together to combat any adversity is the key to victory. I’ve had a lot of fun assembling teams, tracking down Pokémon and helping them grow.

For example, I realised that before I faced off against Nessa, the Gym Leader of Hulbury and master of all things water Pokémon, I needed a leaf Pokémon. Fortunately, there happened to a nicely-leveled Eldegoss on the bridge to Hulbury that I was able to capture. After going through the gym’s trial of rerouting water pipes, I faced off against Nessa. There’s a massive crowd on standby at all times and they didn’t seem to have a home team preference, as they cheered my presence. It felt good. The fights tooke on titanic proportions with the Dynamax option, which turned the Pokémon battles into a kaiju-vs.-kaiju romp. I was able to prevail, as leaf is super effective against water. Victory earned me a badge and praise from Nessa. It was time for the next gym. 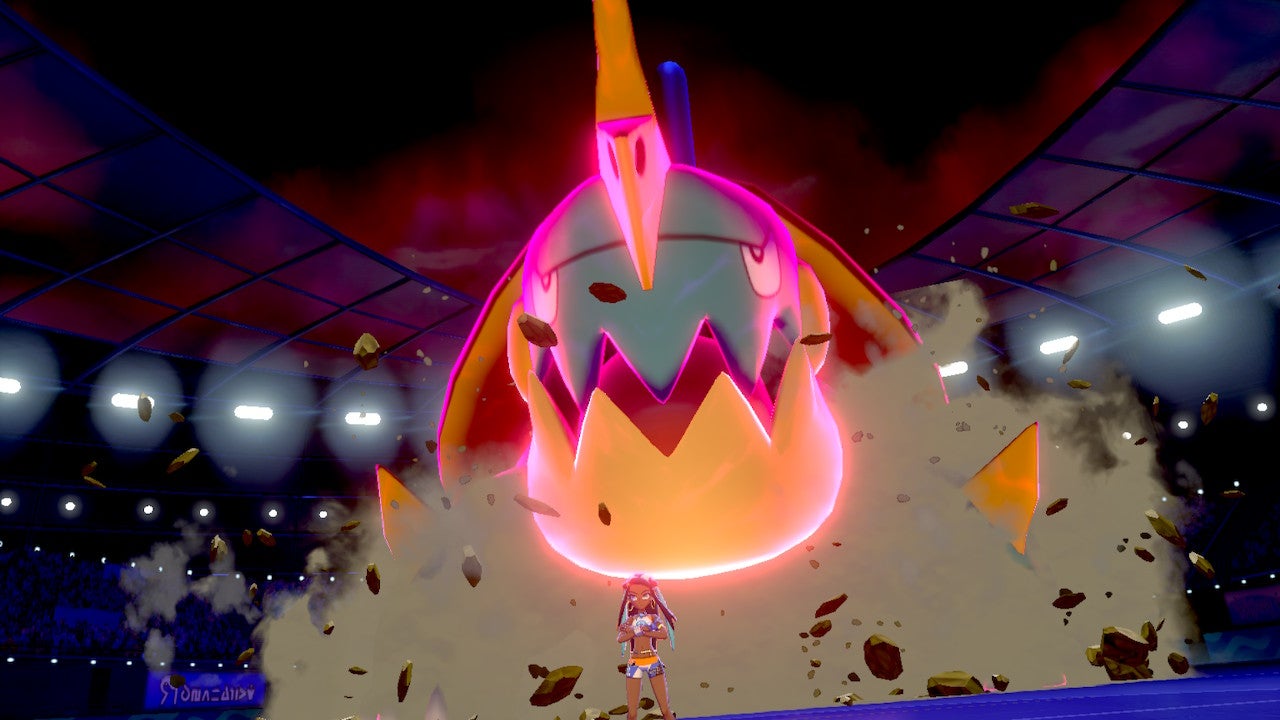 It’s an addictive gameplay loop. There’s a constant stream of new items to use. On top of that, experience points are bountiful, so characters are constantly getting better. Everyone you meet is so positive, I felt a little like I’d joined a religion where everyone was super peppy

Executive director Satoshi Tajiri conceived of the series shortly after the original Game Boy’s release. I was interested to learn that Pokémon’s roots began with Tajiri’s childhood hobby of collecting insects. Although I never collected insects myself, I did enjoy gathering bugs with other kids and playing with them in the mud.

In the same way, I’ve really enjoyed experimenting with different combinations of Pokémon, trying out different skills and seeing what effects they have. Is there any way to make the separate Pokémon tag team together for additional effects, kind of like Chrono Trigger’s double techs? I don’t know yet, but it’s something that would be cool if possible. In terms of the campaign itself, the game’s been generous in its difficulty curve, challenging me but never making it too arduous for me to proceed. 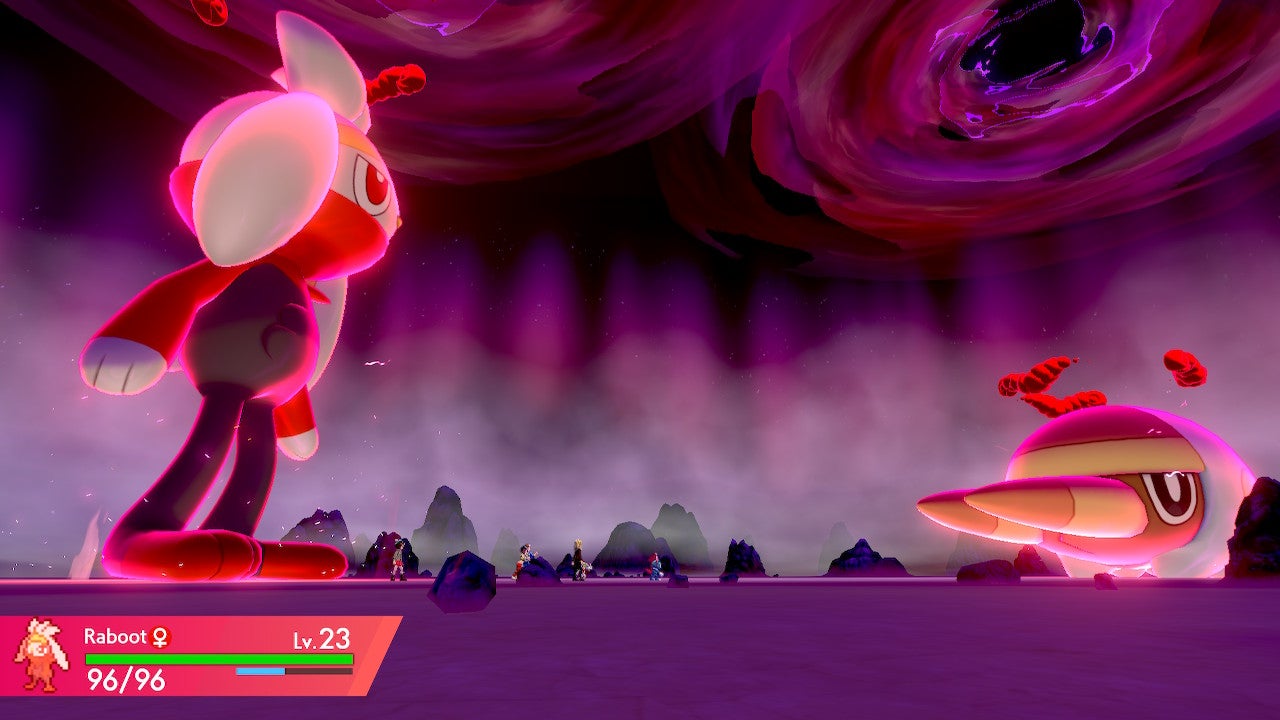 I put in over 20 more hours exploring the Wild Area, hunting down rare Pokémon, going on raids for dynamaxed Pokémon, and levelling up my group. I was told certain new Pokémon showed up only under certain weather conditions. Whenever I needed a break from the grind, I played with my Pokémon in the camp areas, throwing balls for them to chase down, and cooking curry. I once cooked curry from scratch in Thailand; it was one of the best culinary experiences I had. The opportunity to share a curry meal with my Pokémon brought back fond memories of that time, and I enjoyed bonding with them. 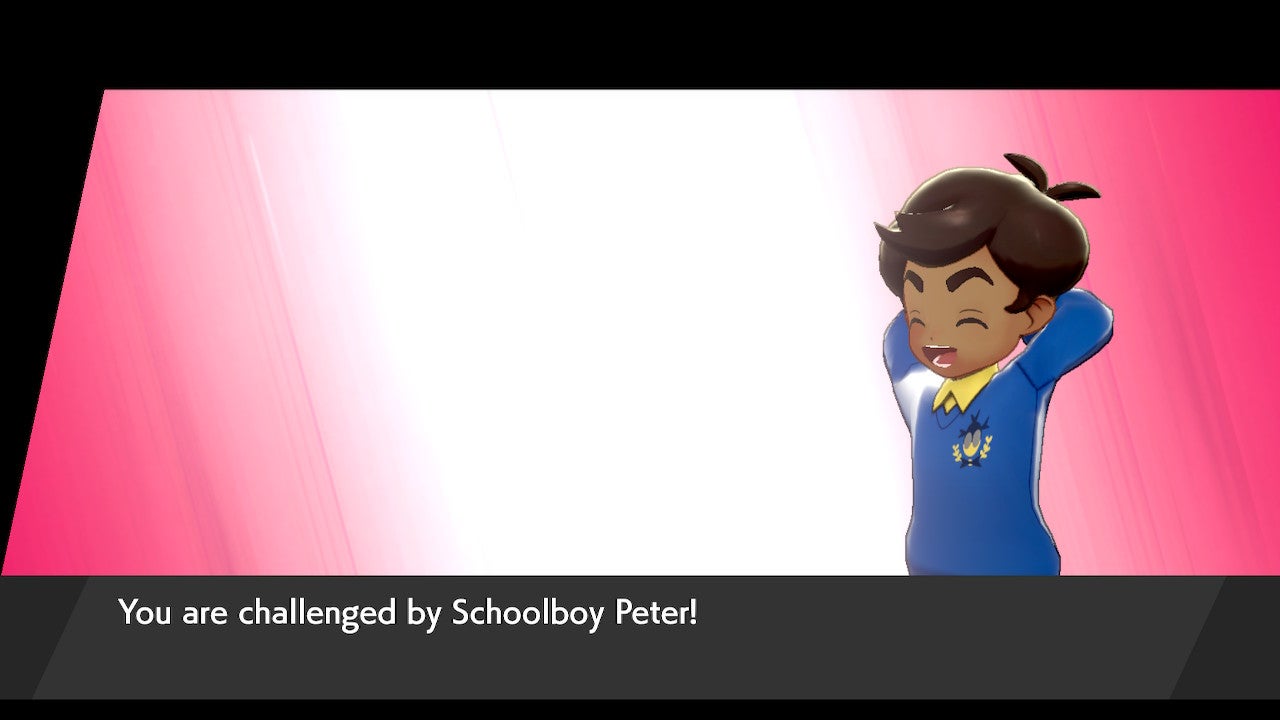 Everyone I met—whether it was the postman, news reporters, or gym trainer—challenged me to a match. I had to beat them, but afterwards, they encouraged me to become a better trainer and even offered advice on how to improve. Adding to the variety of tasks at hand, I could send my Pokémon to do jobs, or leave them at a nursery to breed different types with special abilities. Everything made sense from a Pokémon point of view. 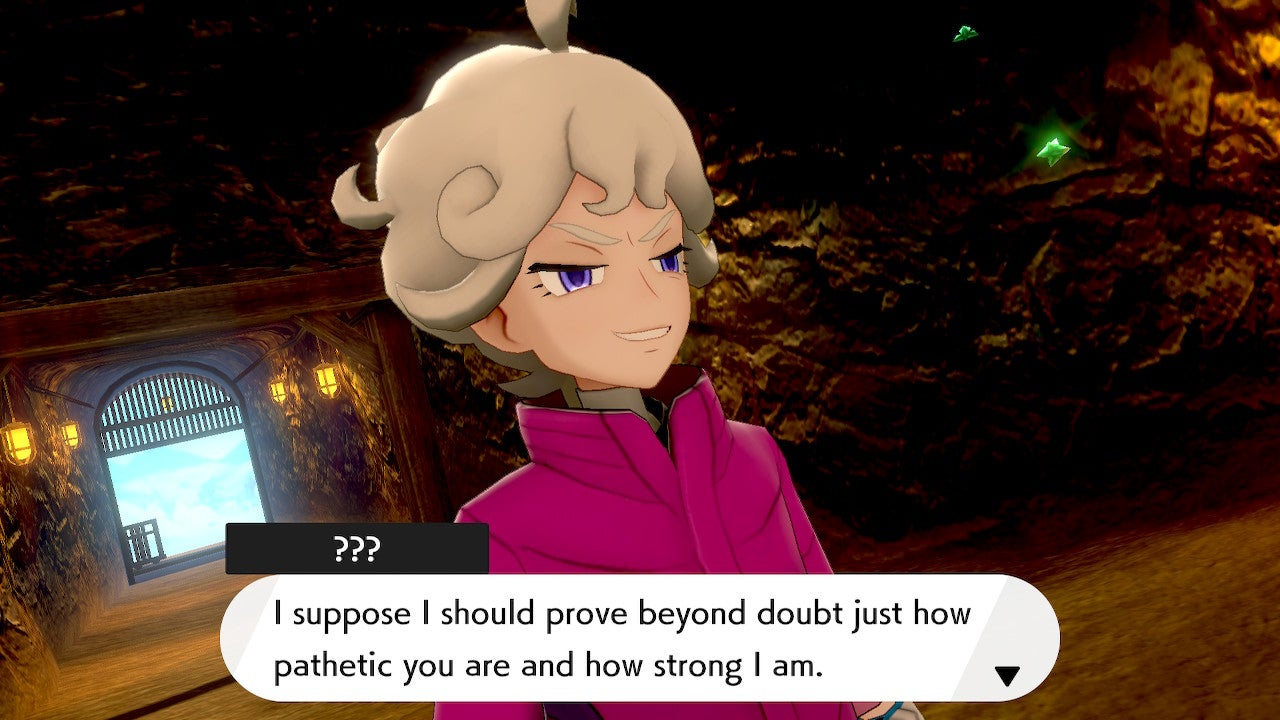 As there was so much to Pokémon that I didn’t know, I took a step back from the game and watched hours and hours of YouTube videos to get a better understanding of the world. Game Theory had a bunch of Pokémon videos that were fascinating, and Tim Rogers’ overview of the series helped me to grasp why the Pokémon series has been so appealing. His comparison of the Pokédex to actual playing cards, and the numerous possibilities and combinations each deck represented, put things in a new perspective. 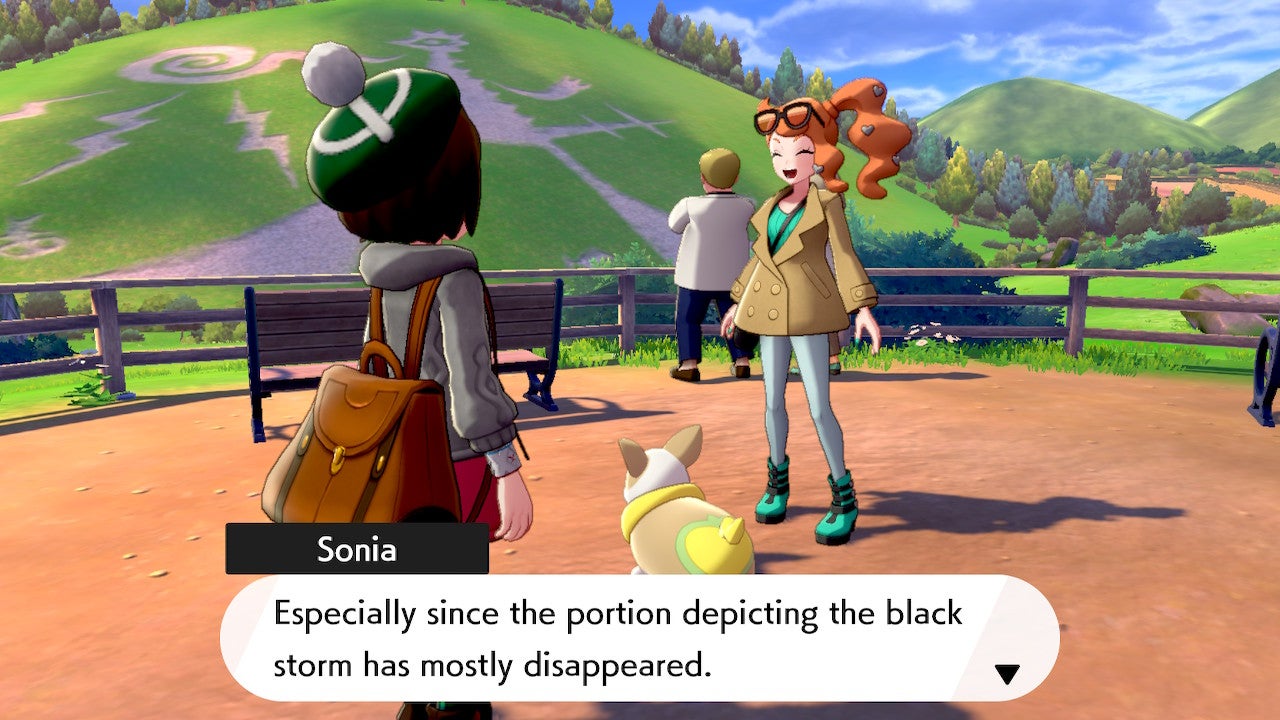 When I returned, I played another 20 hours. I loved how Pokémon Shield started getting into its lore. There’s references to a tragic event called the Darkest Day from ancient times. Sonia, a Pokémon researcher, mentions that Dynamaxed Pokémon ran rampant during this time, which was scary to contemplate. I knew it was important for me to keep on training and to get better to prepare in case something like the Darkest Day ever happened again. Nothing else mattered in its pursuit. The questions I’d asked earlier about the world of the Pokémon seemed irrelevant. What did it matter when my objective was that I gotta catch em’ all?

My Scorbunny evolved, first into a Raboot, and later, into a Cinderace. Different Pokémon require different rules to evolve, so I began researching what did what. I also decided to watch the Pokémon anime and in my down time, I started playing the earlier versions of Pokémon games. My room is full of Pikachu dolls. I poured hours upon hours into Shield and even contemplated picking up Sword so I could get the full experience. Even when I was eating, I made sure to get some extra training in. I actually have a bunch of stories I need to write tonight, but I’ll get to them after I catch some shiny Pokémon. Just two more. Or three. Please excuse me.