Roughly 10 hours into Pokémon Shield, I stepped into a stadium packed with screaming fans to face off against ghost-type gym leader Allister, a shy and awkward mask-wearing kid. I reliably made it through three of the four Pokémon on his team before getting my shit completely wrecked by his last monster. Even without Dynamaxing, that monster was destroying every Pokémon on my team. I tried to brute force it by overlevelling. No dice. I changed up my team, grinding some more to bring them up to speed. Still not working. It was after my third time losing that I realised Allister was using a particular set of moves to increase the monster’s attack power to astronomical levels. I had to change up my strategy. For the first time in my adult life, I was seriously thinking about strategy in a Pokémon game, and I had a blast doing it.

The trickiest thing about Pokémon is trying to figure out who it’s for. After 20 years, the behemoth series has accrued many masters to serve: kids, competitive players, and grown-ups who just want to pet a Pikachu. As such, Sword and Shield have already been divisive for months before release. Ever since it was announced that it would not be possible to import every Pokémon into this generation’s games, there has been a subset of fans who have primed themselves to hate this game. It’s easy to focus on this loud group decrying “Dexit,” the moniker they’ve given the cut roster of monsters. But that’s not the only story of what it means to be a Pokémon fan right now.

Since Red and Blue released for the GameBoy in 1998, Pokémon has been a phenomenon. For many people my age, Pokémon is a relic of childhood, a tangible piece of nostalgia that miraculously keeps reappearing. So I want this review to clear some things up. I won’t currently address all of the complaints due to restrictions on spoilers, but I can say, unequivocally: Pokémon Sword and Shield are good games.

Though I keep returning with each instalment, my interest in Pokémon has waned. Too little has been improved in its user interfaces, and certain mechanics, like the methods for evolving or obtaining certain Pokémon, have remained needlessly obtuse, to say nothing of the time-consuming and highly specific methods necessary to train Pokémon for competitive play. The plots and characters are often rote to the point that even children must feel condescended to. The recent games are disappointingly easy. Yet as I lament squandered opportunities for the series to grow, I admit that I’m always hopeful for what that I always seek in games: a sense of wonder. A Pokémon game hasn’t truly made me feel that way since I booted up Red, met Professor Oak, and embarked on my adventure. For the first time since I was a 7-year-old falling in love with her Charmander, Sword and Shield gave me that sense of wonder.

I was awestruck when I ventured into the Wild Area, a new feature for Sword and Shield. There, Pokémon roam on the overworld, occasionally chasing after you as you pass by. There are Pokémon at a much, much higher level than the monsters that surround them—and your own team. There is a chance that if you go out into the Wild Area, you will just see all your monsters faint as they’re swiped at by a gigantic, terrifying raven. It’s how I imagined the Pokémon world as a kid: teeming with life and an undertone of danger. Though there is a level cap on the Pokémon you can catch that corresponds to your gym badge, it’s in place to prevent you from catching one of these monsters and cheesing through parts of the game—which makes sense, since you’d never encounter wild Pokémon this much stronger than you in previous games. 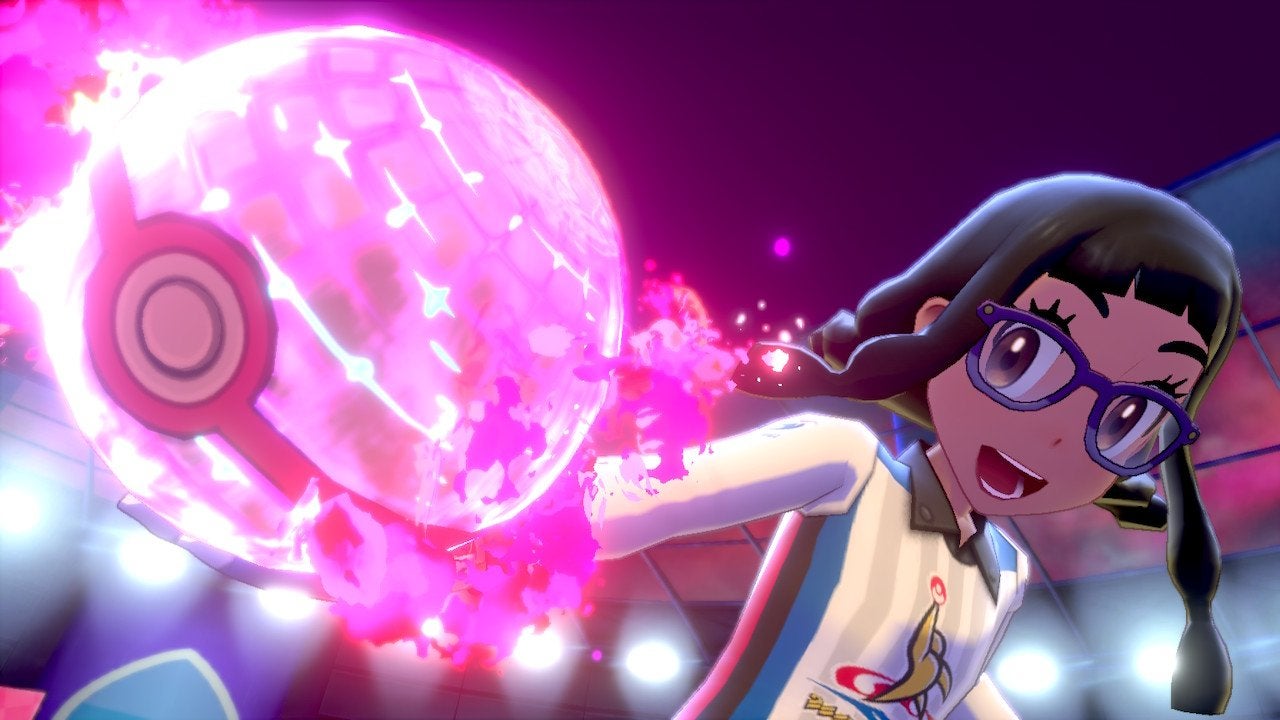 Many of the features that make the game more accessible are optional. In fact, other than the EXP. Share (which you unfortunately can’t turn off but isn’t disruptive to the difficulty), you don’t even have to touch any of the things that make the game easier for people who are lazy, are busy, or are currently children. Though you can access your Pokémon storage boxes at most times, I elected to never use it because it felt like too much of a shortcut for me.

I’m sure other people will gladly take advantage of it. Items like Feathers, which change your Pokémon’s base stats, or Mints, which change your Pokémon’s nature, are never foisted upon you if you don’t want them. There are also new ways to bring your Pokémon up to speed that don’t involve grinding. Poké Jobs, where different companies request Pokémon of a certain type, like asking for bug type ’mons to help make fabric, yield a ton of experience points and also some items or cash.

My favourite way to level up Pokémon quickly, though, was Max Raid Battles. In those, you play with three other real people or computer characters to defeat a huge, ultra-powerful version of a Pokémon. If you defeat them, you have a chance to catch them, and you’ll also gain berries, TRs (one-use technical machines), and candies that give experience points. They started off pretty easy, but they scale up in difficulty the more that you do them. While the servers to play with others weren’t available while I was playing, I imagine that coordinating with real life players will be necessary once you’ve reached the more difficult raids.

Part of that is because Dynamaxing isn’t just a “press this button to win” mechanic, as I’d feared it’d be. That’s how I felt about Z-Moves in Sun and Moon. Modern games have been marred by mechanics that felt slapped on and completely neutered the difficulty. Dynamax Pokémon are very powerful, but there have been times that even with a type advantage, even when I was overleveled, my opponent could still break through my strategy and make me think on my feet. 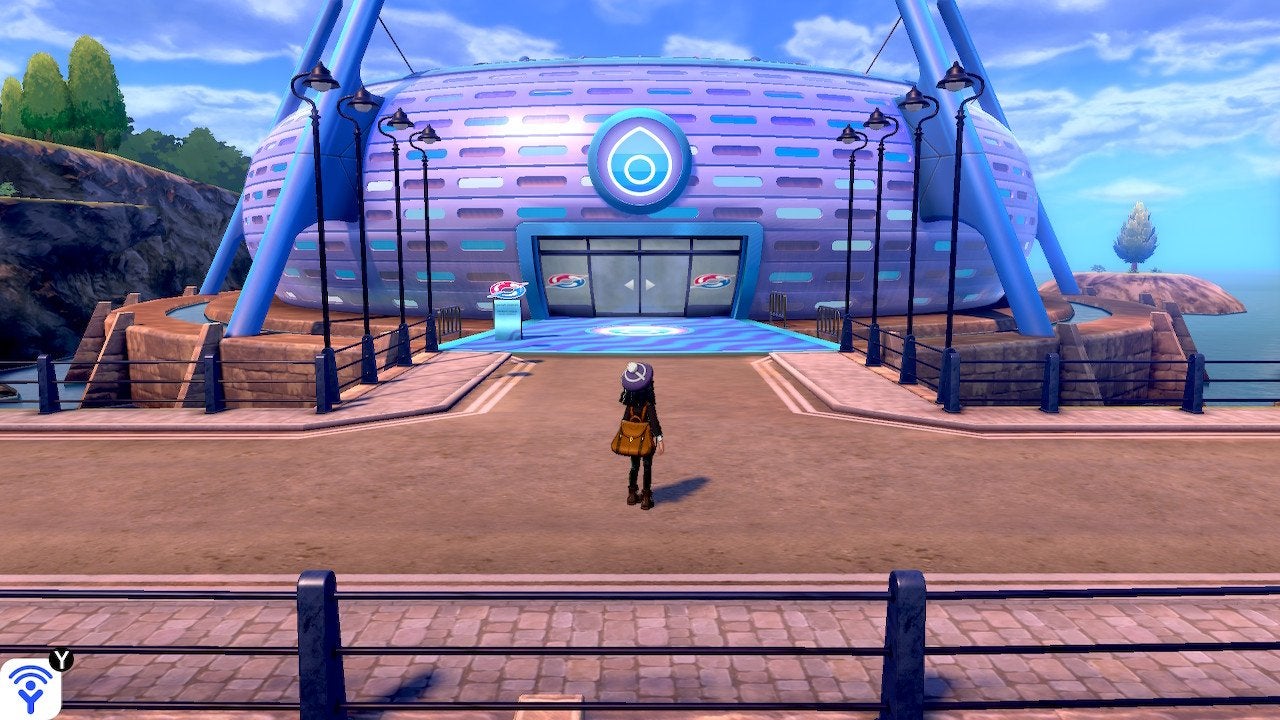 In battle, every time there’s a change to stats for your Pokémon or an opponent’s, it will be denoted in the info panel, which you can open by hitting Y. It’ll also show the status effects in play, the weather, and what these things do. The way that Sword and Shield is eager to show you as much information as it possibly can allowed me to more clearly see how its systems work in concert. I got far more invested in not just raising my Pokémon but seeing what they could do in battle.

The game’s preoccupation with sports culture and fandom amplified these feelings. Gym Battles now take place in massive public arenas, where the crowd reacts to your wins and losses. The stunning upsets and last-minute saves are reflected by this simulated audience. Sometimes, I imagined my former colleagues at Deadspin blogging about my journey as it unfolded, the story of my rise documented in the same way that the Toronto Raptors’ performance in the NBA playoffs made a legend of Kawhi Leonard. The game repeatedly emphasises that a rival to challenge you is what turns a competitor into a champion, and it’s got the gameplay to back that up—the series of youngsters that make up your rivals have their own stories and serve as fun counterpoints to your own adventure. They reminded me of sports movie archetypes: the eager go-getter, the overserious competitor. Hell, I’d just watch a movie about Bede, the arrogant and brash trainer that you cross paths with during your journey, who has a narrative arc similar to Adonis Creed’s in Creed (though it’s mostly portrayed off screen).

Outside of battle, you can camp with your Pokémon, play with them, and cook curry for them. Playing with Pokémon isn’t hugely engaging, but it’s amusing to watch my Sobble pounce on a feather cat toy, or to play fetch with my Wooloo. Cooking is a cute mini-game and has real utility in game play. In order to make Curry, you combine berries and other ingredients you can buy or earn through Poké Jobs. This heals your Pokémon and provides them with experience points, making it a good way to save potions or revives for when you really need them. There are so many ways to approach Sword and Shield that people can play it however they want. 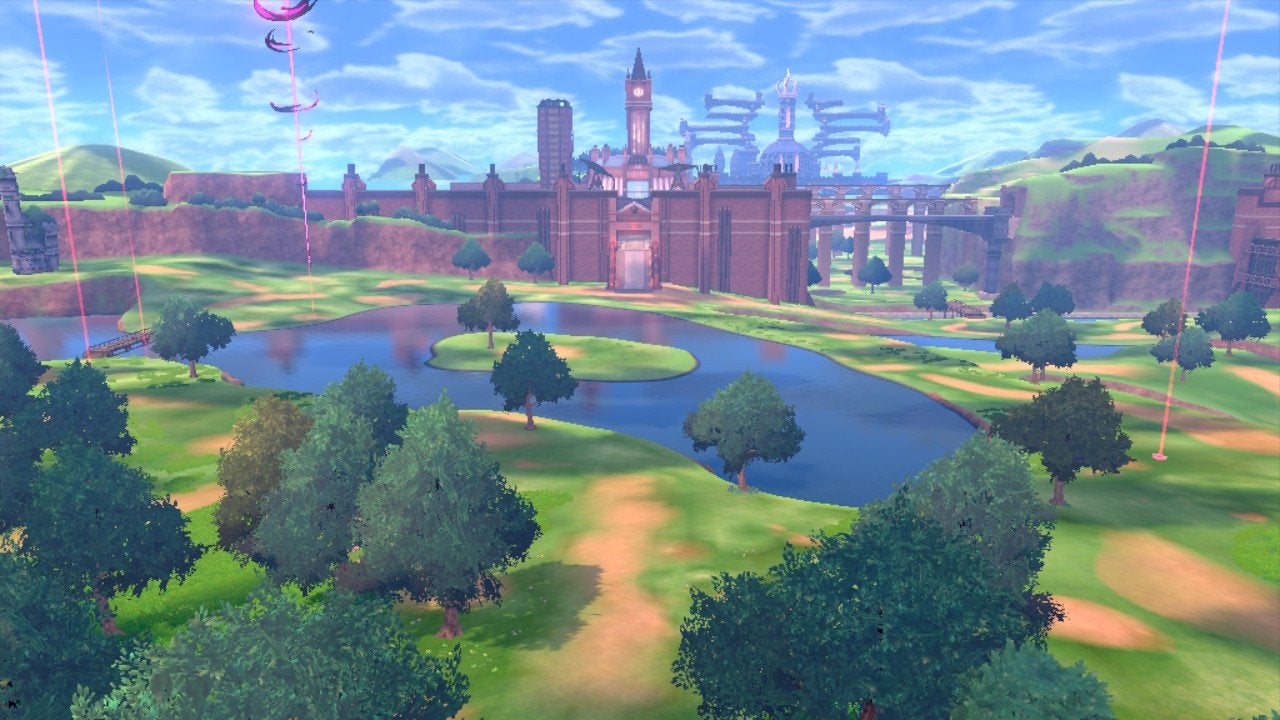 More than the sum of its parts.

Made me feel like I did the first time I played Pokémon Red, all those years ago.

There are legitimate critiques to make about Pokémon Sword and Shield. The game is challenging, sure, but it never kept me up at night. The plot is pretty lacklustre; for example, nothing reaches the narrative heights of Black and White. The environments outside of cities and towns not exactly awe-inspiring, and anyone hoping for a very specific Pokémon in this game from previous entries will more likely than not be disappointed. There are times that the game holds your hand that will feel irritating if you’re an adult, especially in its earliest hours. Yet after the credits rolled, I couldn’t stop myself from reopening my save file. I wanted more adventure.

The magic of Pokémon is that it lets you tap into a sense of wonder that becomes more and more difficult to access as an adult. Sword and Shield do that more successfully than any Pokémon release has in years. It won’t be everything to everyone, and it will not make everyone happy. I’m not sure it needs to. It’s a portal to a new world. And it definitely has something for Pokémon’s core audience: everyone in the entire world.