Cyclops and his children having an awkward moment. (Image: Leinil Francis Yu, Gerry Alanguilan, Sunny Gho, Marvel)
To sign up for our daily newsletter covering the latest news, features and reviews, head HERE. For a running feed of all our stories, follow us on Twitter HERE. Or you can bookmark the Kotaku Australia homepage to visit whenever you need a news fix.

A few weeks back, Jonathan Hickman invited us back into the Dawn of X with a bold statement about just how the X-Men plan to bolster their numbers in the new age of mutant ascendance. New mutants are coming into their powers every day, but the Quiet Council of Krakoa wasn’t content to just sit back and wait for new recruits to show up. The X-Men want to make more mutants the old fashioned way: by getting hot and heavy with one another.

Marvel’s humanoid mutants mashing their genes together to make uber-powerful offspring is nothing new, which is why it isn’t surprising that the X-books haven’t quite yet leaned into all-out sexfests. But this week’s X-Men #2 from Hickman, artist Leinil Francis Yu, inker Gerry Alanguilan, and colorist Sunny Gho, gets down to the important business of making it clear that at least one member of the Krakoan island nation is more than focused on… following through on some of their biological imperatives.

Scott Summers has never been a particularly good father figure to any of his biological children, but this is a new day for mutantkind, where everyone’s getting a chance to reinvent themselves and become the kinds of people they’ve always dreamed of being. With Prestige and young Cable firmly back in the fold, Scott’s trying (emphasis on “trying”) to make up for the time he never got to spend with his kids. But there’s still something decidedly off about the way the Summers family members are with one another.

Both Rachel and Nathan spent their childhoods growing up in nightmarish hellscapes that didn’t allow them to develop deep emotional bonds with Scott, who simply wasn’t part of their lives. And yet, they’re both more than comfortable calling him “dad,” and “father,” and spending time with him to fly off to dangerous, secret missions.

While there’s been plenty to worry about on Krakoa itself, Scott informs Rachel and Nathan that the most pressing issue facing the island’s mutants right at that moment is the fact that the entire landmass is racing across the ocean to make a beeline for yet another island. Because Cypher’s currently off-planet, there’s no one on Earth really capable of communing with Krakoa to figure out what it is that the living island is trying to do. But before the Summers trio even has a chance to land on the strange island”Arakko”they can immediately see that it’s a wildly dangerous place, as evidenced from the gargantuan tentacles jutting out of a massive volcano at the island’s centre. 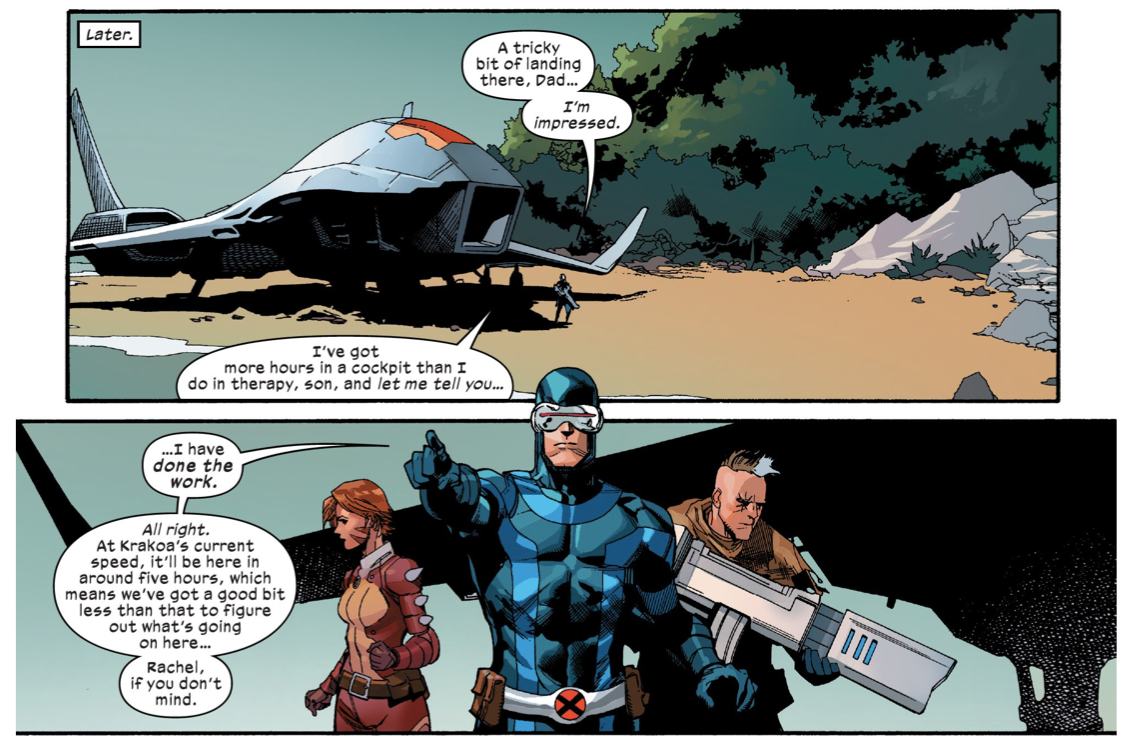 Once the mutants are on the ground, they discover that Arakko’s mostly populated by strange, impossible creatures like docile three-eyed bulls and smaller, carnivorous amphibian octopi that eat the bulls. Strange as all that is, it’s not entirely out of the ordinary for the X-Men, who are rather used to spending time in foreign, dense jungles that want to kill them. But things become very, very interesting when the mutants meet one of the only living, speaking beings currently “living” on the island”a young, pale, naked man who refers to himself as a Son of Arakko.

Much like Krakoa, the strange man speaks in a language that none of the mutants can properly comprehend instinctively, and an unfortunate bit of miscommunication leads to young Cable attempting to blow the man up with a thermal grenade, which doesn’t seem to hurt him when it goes off. What it does do, however, is send the pale man into a rage and give him reason to use his strange power to summon the daemons that lurk in the shadows of Arakko. Were it not for a bit of quick thinking on Rachel’s part, there’s a solid chance that the summoner would have killed her and her family members, but by using her telepathy, she’s able to create a psychic bridge that allows them all to finally communicate with one another.

Just as quickly as the summoner was about to kill them all, he begins exchanging a few words with Cyclops about love of all things”and when Cyclops asks if the summoner has any idea why Krakoa is on a crash course with Arakko, the summoner urges all the mutants to simply look up and watch what’s about to happen. 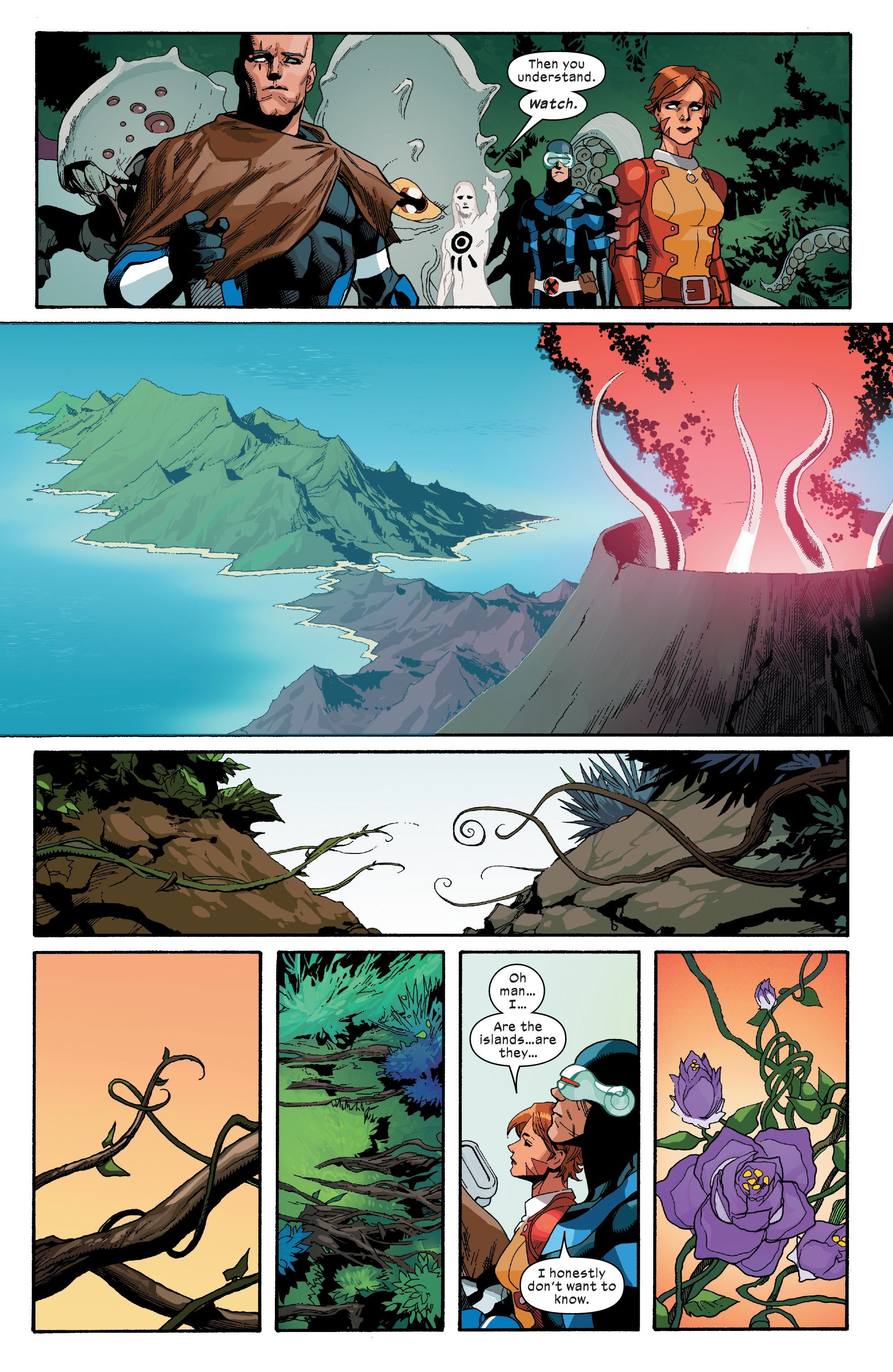 The X-Men and the summoner watching as Krakoa and Arakko have island sex and become one. (Image: Leinil Francis Yu, Gerry Alanguilan, Sunny Gho, Marvel)

The big twist in this week’s X-Men was actually teased a while back in Powers of X #4, when we’re given a glimpse into Krakoa’s long-forgotten history and the story of how it was actually once part of a much larger landmass called Okkara. ItÂ was broken apart during a fight between Apocalypse and his First Horsemen, who were battling against an enemy wielding the Twilight Sword. In order to save the world, Apocalypse split Okkara in two, sealing his Hosemen and Arakko away into an interdimensional chasm that’s seemingly reopened in the present.

With the two halves of the island now back in the same place, generally speaking, Krakoa wants to do what any lover who hadn’t seen their partner in a few millennia would do: It’s coming over because it wants to, uh. Well. Have island sex and become whole again. The entire idea of two halves of a living island boning down in the ocean fits right into the overall weirdness that’s defined “Dawn of X,” but in the end, that’s not what’s so fascinating about this particular issue.

With Arakko and Krakoa now reunited, the summoner makes quick work of familiarising himself with the larger island, and under the cover of night while the mutants sleep, he ventures off into the forest to rendezvous with Apocalypse, who knows more about him than anyone else living. What the X-Men don’t realise about the summoner is that he himself isn’t merely a magic user who’s been trapped on a nightmare island for as long as he can remember. He’s the son of Apocalypse’s first War, and Apocalypse doesn’t hesitate to tell the summoner that he intends to protect him the way he protects all of his children. 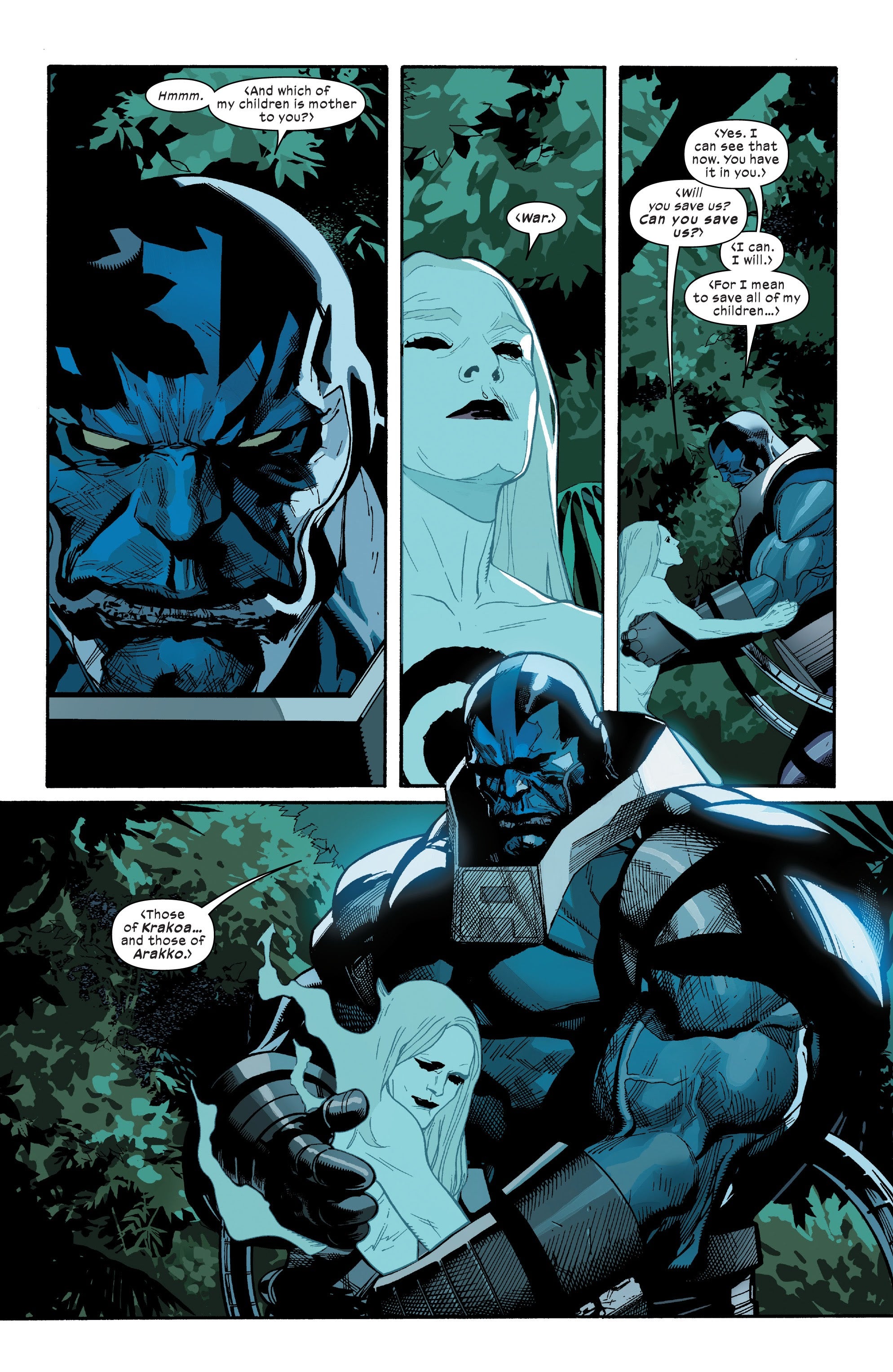 Apocalypse assuring the summoner that he will save him and the rest of mutantkind. (Image: Leinil Francis Yu, Gerry Alanguilan, Sunny Gho, Marvel)

The fact that Apocalypse wasn’t immediately forthcoming with the X-Men about who and what the summoner is suggests that the ancient blue mutant’s plans for his pale descendant aren’t anywhere near as altruistic as he’s making them out to be. But unlike Scott Summers, Apocalypse has always been the kind of father figure who genuinely wants to play an active role in his children’s lives. When he says he intends to save them all, you know he means it and then some, but what remains to be seen in the specific form his plans will take”and how he’s definitely going to end up causing more harm than good by the time this story comes to a close.